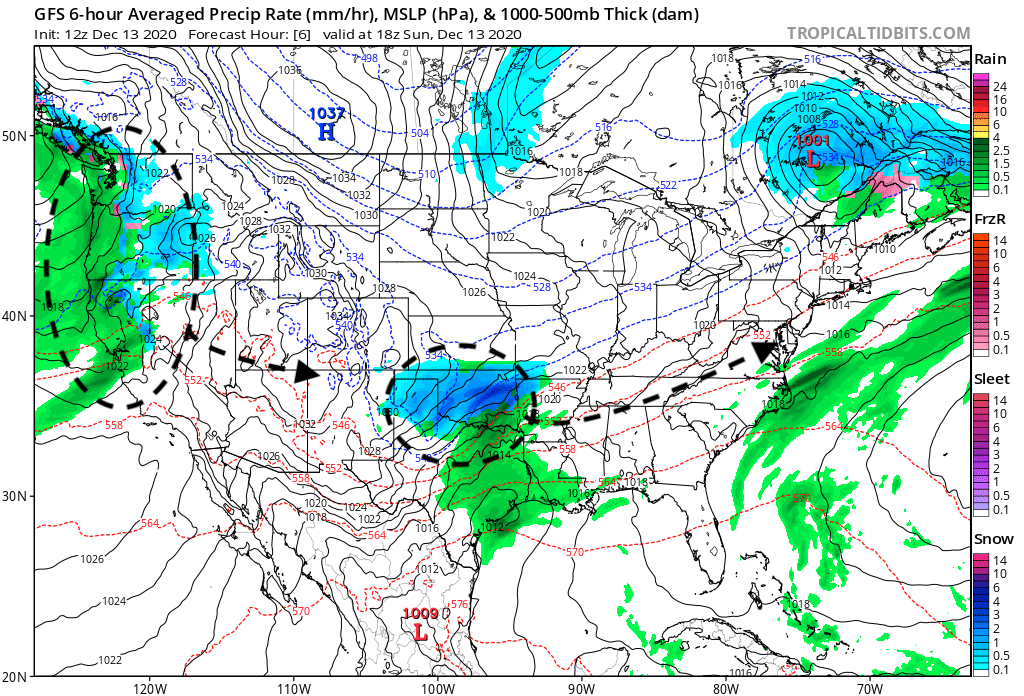 With the return of a full sky of sun today, we watch our latest snowstorm depart and look ahead to the next week.

In Denver, snowfall totals remained light. Denver International Airport recorded 2.0" of snow Saturday evening, bringing the total for the week to 3.2". For the snow lovers out there not exactly exciting totals, but as we discussed over the last week the most probabilistic totals from the two events was somewhere in the Trace to 4" range, which is about where everyone across the region ended up. Our station, on the west side of Denver, only managed 1.5" of snow last night, and 1.o" from round one. Technically within range, and has brought a nice feel of winter to the neighborhood as well.

This afternoon the snow that fell over the state yesterday and overnight is long gone, bringing areas of heavy snow and rain to Oklahoma today. That system will move through the Mid-Atlantic early this week, as our next system has already moved onshore across the Pacific Northwest, and will bring another chance of snow to the Front Range Monday into Tuesday.

The week ahead
The week ahead starts on a chilly note across the region with that next chance of snow arriving Monday afternoon and evening to the Front Range and urban corridor. By Wednesday we see milder air return, with highs back into the mid 40s for the Mile High City.

This is again expected to be a mainly light snow event, with only minor accumulation expected for those that do see snow on Monday. Still, some slick roadways will be possible with the passing showers, and at least some light accumulation will be possible in spots – generally in the Trace to 2" along the foothills and I-25 urban corridor.

As you can see, the snow chance in Denver at this time is only in the 40% range or so. This system won't be that organized as it moves through, but snow showers and a reinforcing shot of cold air will keep our wintry theme going to start the work week. Not everyone will see snow, and for those that do, not everyone will see it accumulate.

Here's the basic idea – a few areas of better accumulation for the high country, but general light totals (or no accumulation at all) across Eastern Colorado:

Another system races through Thursday night/Friday, but at this time looks even less impressive than the early week system. We'll keep an eye on it just in case.

Looking ahead
The pattern for the remainder of the month looks to remain fairly active, or at least transient. In other words, while perhaps no big storms on the horizon – no monster ridge either. We'll continue to see troughs swing through over the next few weeks leading, but whether any of them are able to slow enough to be more impactful than we've seen from the last two remain to be seen.

Here's a look at the European 500mb pattern through Dec 23 – note all the blues (troughs) swinging through, with brief ridging between. This particular model shows a trough moving into the Great Basin just in time for Christmas Eve, so perhaps something to watch there.

Looking at the PNA forecast over the next couple of weeks, this makes sense. Neither strongly positive or negative, oscillating between the two a bit. This suggests no strong western trough or ridge, keeping us in the hunt for a storm... but perhaps nothing that can "stick".