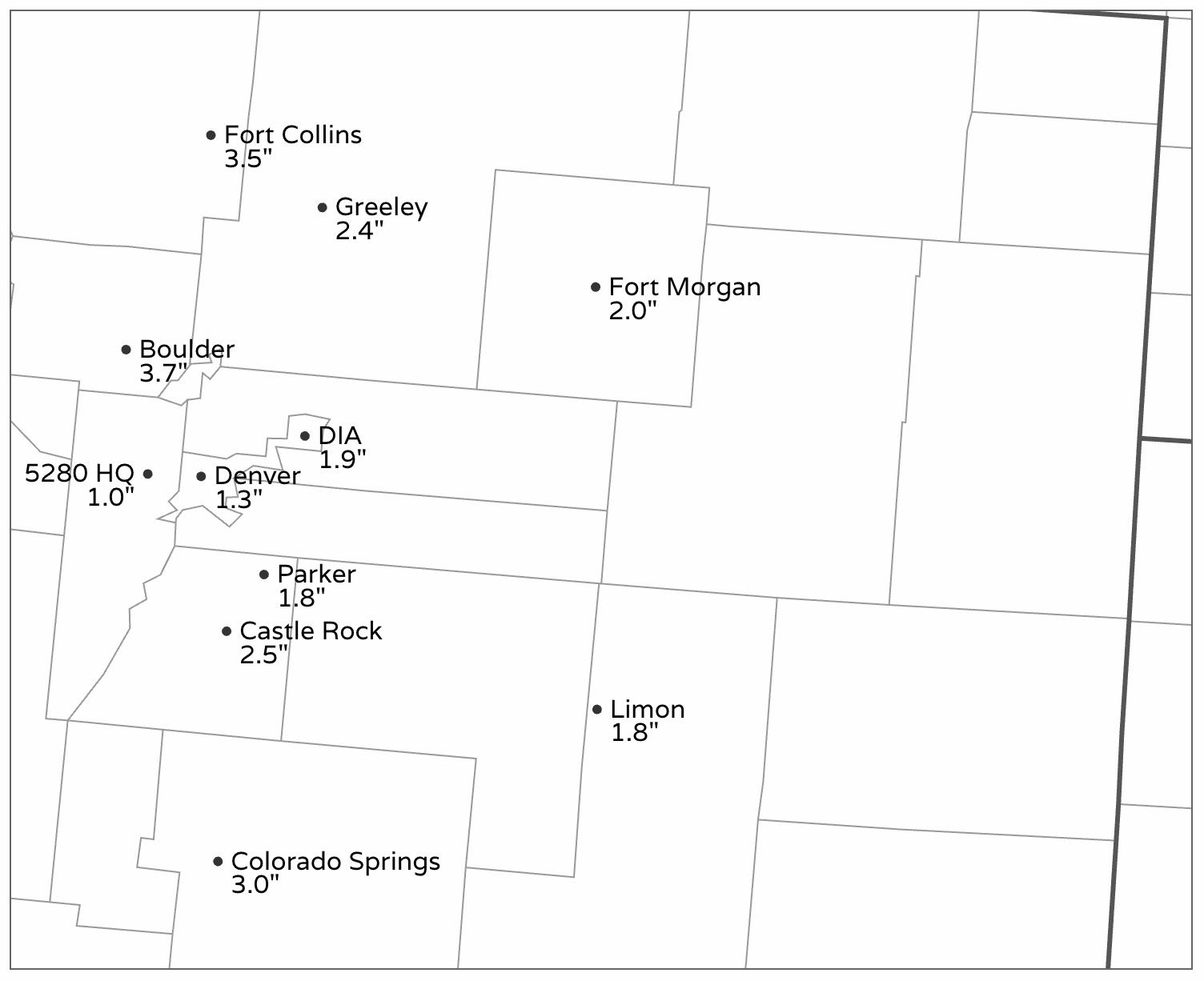 This weekend's snowfall worked out just about as expect across the state, with a nice snow during much of the day Saturday and Saturday night delivering from a Trace to 4" of snow across the I-25 corridor and adjacent plains.

The "boom" totals were around 4", while others ended up with less than an inch. The majority of those from Colorado Springs to the Wyoming state line saw from 1 to 3" of snow, including 1.9" officially for Denver.

Here's a look at totals from across the forecast area:

And a regional look – showing the pocket of heavier snow we discussed on Saturday up north of Denver, as well as more widespread heavier snow across Southern Colorado:

The most unfortunate news about this weekend's snow was the lack of snow across the Western half of the state. As you can see above, most of our mountain locations saw little if any accumulation with this event.

This means our already hurting snowpack is in worse condition than it was to start the year, with only the Upper Rio Grande basin hovering near normal:

The week ahead
For those hoping this week will help the snowpack situation across the state, the outlook is not great. A strong ridge builds into the west this week, and will keep our weather pretty quiet, with above average temperatures expected most of the week across the region.

At 500mb, we see the positive heights (reds) well established over the next 5 days across the West, with the mean trough (blues) over the Southeast United States.

As you might expect with a pattern like this, there just won't be much cold air to be found across the West and northern tier this week, with above average temperatures dominating the pattern for many outside the south through next Saturday:

A system will move out Canada late in the week and at least try to clip the state. This should work to cool temperatures across Northeast Colorado from highs near 60°F on Wednesday into the 40s on Thursday, but at this moment doesn't look all that likely to bring much moisture to those of us east of the mountains.

The most likely candidates to see some snow late this week under this pattern would be the northern and central mountains – which of course would be great news if it pans out. The European ensemble mean precipitation forecast through next Saturday afternoon shows a dry southwestern United States, but at least some moisture for the northern mountains in the Thursday - Saturday timeframe along the northwest flow aloft as the trough passes to our northeast.

So, look for a warm next couple of days. The pick day of the week to get outside and enjoy some January warmth will be Wednesday, with highs in the low 60s for many locations across the region! It'll be a bit cooler to end the week with the passing system – but still not cold by any measure for mid January.