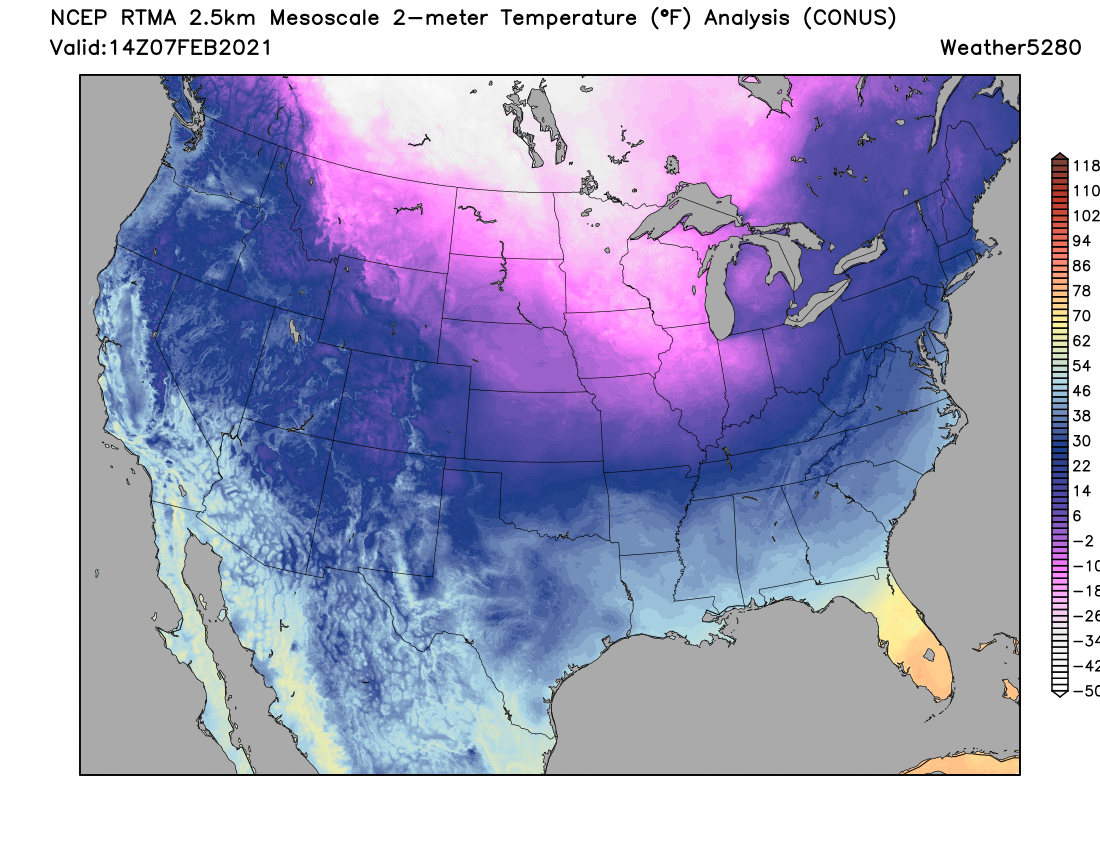 The State of the Atmosphere: Sunday, February 7th, 2021

There's a lot to get to in this week's SOTA, but first let's take a look at temperatures this morning across the region, while they aren't all that cold here against the foothills of the Rockies, you do not have to travel far to find the arctic cold that once looked like it would be a bit more impactful for our neck of the woods.

The most extreme cold Sunday morning is found across North Dakota and Minnesota, though just on the other side of the Colorado/Wyoming and Colorado/Nebraska state lines we see temperatures in the single digits and teens.

And looking at temperature anomalies across the CONUS today, it's not hard to imagine how different this weekend might have been along the urban corridor had that colder air worked its way just another 100 miles west or so:

Recent mountain snowfall has helped at least a little, but overall statewide snowpack continues to run well below average (about 85% of median at this time).

The week ahead
First, the wind. Sunday and Monday will feature plenty of it, with gusts near 50mph in Denver and in excess of 60mph in the foothills and Front Range mountains where a High Wind Warning is in effect through Sunday evening.

The wind help will keep us on the mild side and dry across lower elevations for the next couple of days. In the mountains, some list snow showers are possible today before a couple days of quieter weather is expected up there as well to start the week. Here's the hourly planner for Denver through Wednesday morning:

Snow and cold?
The week ahead is almost certain to feature more mountain snow, and perhaps some significant totals when all is said and done.

Latest snowfall probabilities from the European ensemble model shows odds for 6" of snow or more through next Sunday are quite high for most of the high country, especially for the northern and central mountains which continue to lag the most in overall snowpack numbers this year.

What happens east of the hills is (shocker) way more uncertain. If you're tuned into Twitter or local media, you've no doubt seen some of the incredible cold some of the models are producing across the Plains by late in the week and next weekend. Let's remember that many of the same models that are putting us in the deep freeze for next weekend had temperatures in the teens for highs yesterday a week ago, when in fact we topped out at 45°F on Saturday in Denver. Medium range modeling is struggling mightily right now.

What we do know is there's likely to be an impressive cold outbreak later this week across the central U.S. (as if it's not cold enough for many already today!) which has potential to deliver that arctic blast to Eastern Colorado should things evolve as some data would suggest.

To give you some idea on how much models are struggling with this upcoming pattern – let's just take a look at the forecast from the latest GFS vs the latest European model for high/low temperatures at Central Park over the next week.

First, the GFS. It has highs in the single digits and lows below zero for three days straight beginning Friday. An impressive cold outbreak like we haven't seen in some time.

Compare that to the overnight run from the European. Just a slight 49°F difference in the forecast high for Denver on Friday!

Another way to look at this is forecast temperature anomalies next Friday evening. Look at the extent of the cold on the GFS (left) vs the Euro (right). The GFS has widespread temperatures more than 35°F below average across a huge portion of the country, while the Euro is much more retrained with the extent of the extreme cold at this time. It also shows how CLOSE the cold will be to Denver if this run were to prove correct – teens across the Northeast Plains, but 40s to near 50 for the metro. Goodness.

Now, the Euro has had the cold at times too. Its forecast from two days ago looks much more like the GFS, including an eye-popping -28°F showing up for a low next Sunday morning. Clearly its most recent runs have reconsidered this idea.

So, how are the ensembles handling this? Well, they are cold, but as you might expect there's a HUGE amount of spread in their solutions. The Euro seems to just have given up, going with 28°F for a mean high in Denver Friday, Saturday, and Sunday, with overnight lows in the single digits. The spread between the 50 members is somewhere in the 60 degree range for any given point. A complete mess.

As for odds we drop below zero next weekend? Well, if you live across far Northeast Colorado the odds are looking pretty good. The further south and west you go those odds drop off. Still, even with the huge amount of uncertainty we're working with, the Euro is showing about a 40% chance that Denver dips below 0°F next Saturday:

With the greatest confidence in the extreme cold ending up north and northeast of Colorado next weekend:

What about snow?
As you might expect, the models with more snow are also the colder runs.

The coldest runs from the GFS show widespread light to moderate snow across much of Colorado from Thursday evening through Sunday. In total it brings between 3 - 10" of snow to the urban corridor and eastern Plains during that period, with upwards of 3 feet for some mountain locations.

In the colder runs from the European late last week it too had a nice snowfall event for the Plains with the influx of cold air. In more recent runs it's confined the snow to the high country as it keeps the colder temperatures at bay as we discussed above.

We aren't likely to get one without the other. Perhaps we'll get the cold and less snow than the GFS is advertising, but if it's going to get that cold we'll almost certainly see some snow as well by the end of the week. That, however, feels like a big if at this time.

If you ARE hoping for snow, our gamblers are some of the more bullish probabilities you're likely to find this morning. For 3" of snow or more over the next 7 days we're looking at 40 to 60% odds for cities from Castle Rock to Fort Collins, while the European ensemble probabilities are closer to 10 to 30% over the same area.

TL;DR
Windy and mild weather is on tap today and tomorrow, then our focus shifts to late week. Snow is likely to pick up in the high country by Wednesday and continue off and on through the weekend.

The potential for extreme cold Thursday through Monday is on the table, including some possibility for even record-setting cold. However, and that's a big HOWEVER, it's at this point not the most likely scenario. There's a huge amount of uncertainty in how things will shake out, so best to plan on the potential cold and snow, but not count on it. As we showed above, there's far less ensemble support for such extremes, and some of our best models have trended well away from the type of cold and snow showing up on the GFS as of now. On the other hand, ensembles are going to have a real tough time picking up on this kind of extreme as well – so perhaps the GFS has an idea.

Bottom-line: we know there will be a LOT of cold air around by late this week and next weekend, and some of that may at times push into Eastern Colorado and up against the Front Range, and with it some snow to boot.