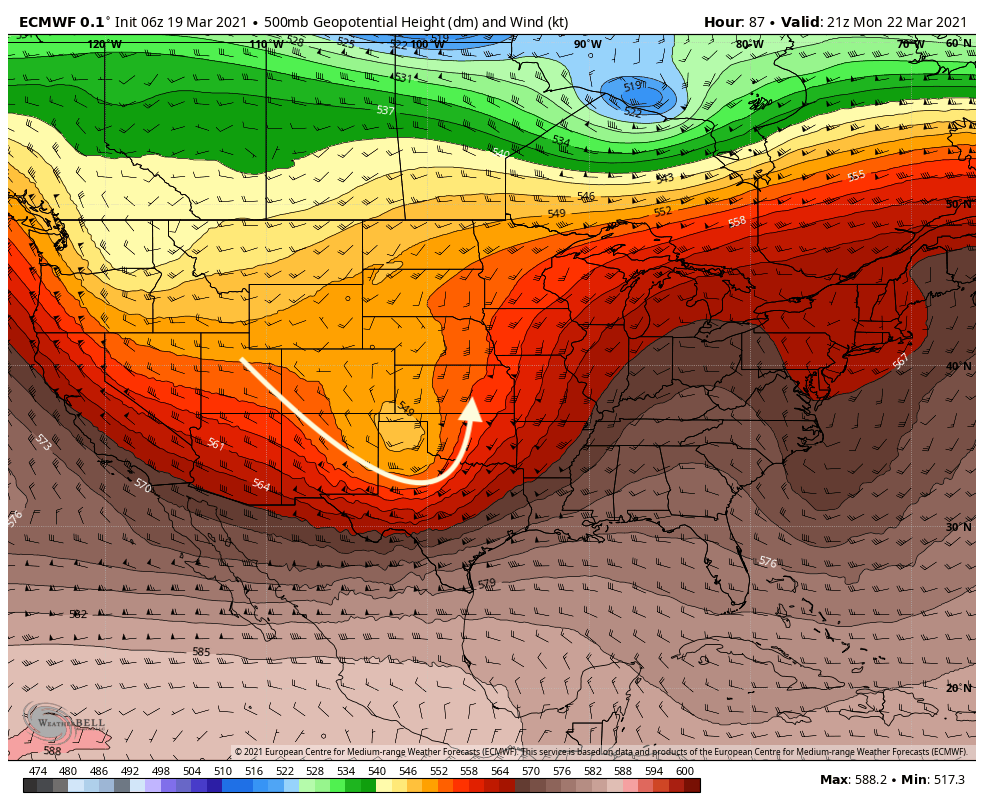 Weekend will feature a mild start, chilly and wet finish

Get out and enjoy today and tomorrow, for if we can kick the inversion in place highs will climb into the 60s for many along the Front Range. By Sunday our next system will be making an appearance, with rain and snow back in the forecast by Sunday afternoon and night. Highs Sunday will top out in the low 40s, with about the same expected for your Monday.

Summary
We are watching a system that will deliver rain and snow to the area later this weekend and into Monday. If nothing changes to the system, as it is currently forecast, there will be higher chances for snowfall to accumulate in elevations to the west and south of Denver, and north and west of Colorado Springs. In the cities, temperatures suggest a rain/snow mix and a more rapid snowmelt after the changeover to snow, with temperatures staying marginally cold this time.

Details
Strong ridging will be in place for the next two days or so, which will help drive our great warmup to end the week and start the weekend:

By Sunday evening we see the ridge is now east of our area, and we are under the influence of the approaching trough, our next weather-maker:

Overnight Sunday into Monday the trough digs to our south and east, perhaps closing off a bit as it swings through the panhandles Monday:

With that, look for timing of our cool down and chance of precipitation to look something like the following:
-Beautiful and warm today and tomorrow with dry conditions across the region.
-The chance of precipitation will be on the increase through the day Sunday, and gradually come to an end Monday.
-There's some chance we see showers develop Saturday night across the plains, ahead of the main event later Sunday, but those are expected to have limit impact at this time.

More accumulating snow?
That'll be the tricky question with this system – where will the rain/snow line set up, and thus who sees accumulating snow vs rain or a mix of both. The system, on the whole, is not nearly as organized or as big as the one that moved through last weekend, but could close off for a time as it moves to our south.

With that, the chance of accumulating snow, even at lower elevations, exists. This is especially true if we time the best precipitation with the overnight hours Sunday into Monday rather than during the day on Monday, and if the trough manages to close off vs move through in a quick, progressive manner. There is still notable differences in the models as to the evolution of this trough.

Looking at probabilities from the European ensemble model this morning we see pretty good odds for 3" of snow or more for the Front Range foothills and Palmer Divide – elevations generally above about 6,000 feet. For Denver and Colorado Springs the odds are actually pretty decent too, about 50% for Denver, and a bit higher for Denver given the current forecast track of the low being pretty far south.

We think the lower-elevation snow potential/precipitation type will be in question over the next couple of days giving a lower snowfall impact for these lower spots.

Higher elevations surrounding Denver and Colorado Springs look increasingly likely to pick up another several inches of snow from this system, barring any changes to the system's speed and/or temperatures.

The mountain communities will be subject to rain/snow and melting just like the cities. However, the mountains themselves and ski areas will pick up quite a bit of snowfall Sunday into early Monday. Totals on the Divide are likely to be over a foot; parts of the Elks, Park, San Juans, Sangres, and Northern Front Range Mountains should come close to climbing over the 6 to 12 inch ranges too.

Trailing system(s)?
Our focus for the next couple of days will be around the snowfall potential Sunday PM into Monday AM, but another system will be quick on this one's heels. Right now, it looks like the bulk of the energy may end up pretty far south of us, but still another wave moving through Tuesday night could mean additional snowfall for portions of Colorado.

The message really should just be a chilly, and unsettled pattern looks likely to end the month. The graphic below shows the GEFS 6 hourly precipitation forecasts from each of its 30 ensemble members. The first outlined cluster is our Sunday/Monday system, the second the Tuesday/Wednesday system, and then perhaps yet another system moving through next weekend.

As you can see, the greatest confidence is in the first system, with more uncertainty thereafter. The first shows some members with some moderate precipitation forecast – plenty of dark greens and even some blues showing! We'll take it.

We'll be watching and offer updates as needed through the weekend. For now, plan on a great Friday and Saturday across the region, but a change toward colder and wetter by Saturday night and Sunday.