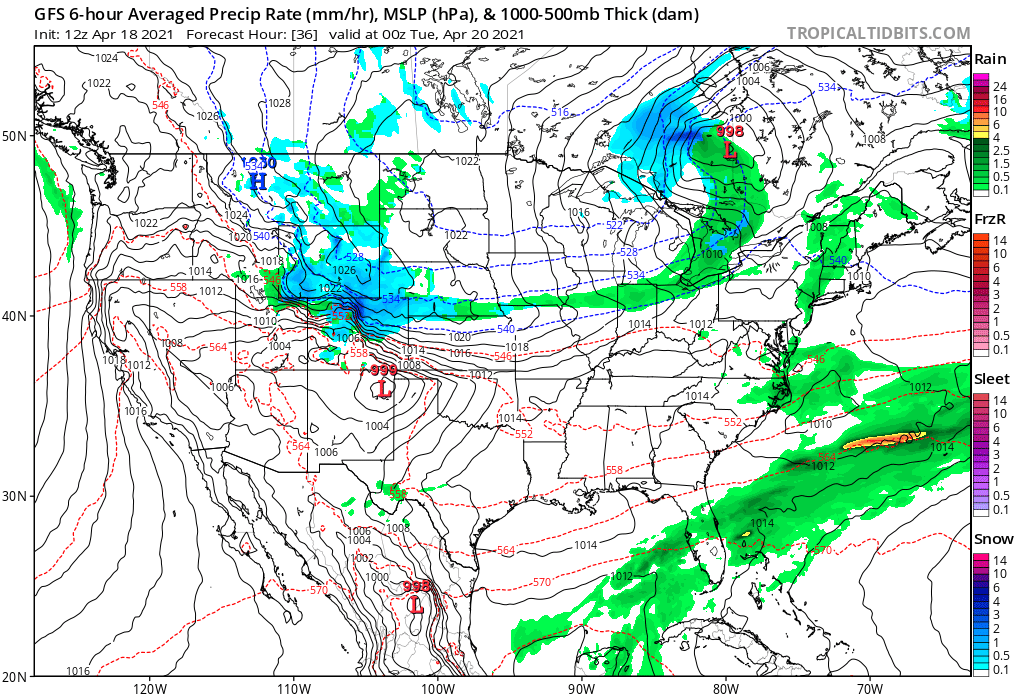 With plenty of sunshine and temperatures breaking the 50-degree mark across the metro area this afternoon, today's feeling very nice after a chilly and wet week.

The mild weather will be short-lived, however, as another rather potent cold front will swing through northern Colorado on Monday, and bring with it another round of rain and snow to much of the state.

Tomorrow's highs will depend largely on the timing of the front, but it looks to push into northern Colorado pretty early in the day, sliding south through Denver by early afternoon. With that, the further north you live the cooler temperatures will be for highs Monday – something like upper 30s for Fort Collins, low 40s for Denver, and mid 50s for Colorado Springs. If that front slows we can add a few degrees for Denver, and if it's fast (as they often are) we can shave a few degrees from the high.

Precipitation chances will quickly increase with the passage of the front, with the best chance of rain and snow (likely mostly snow) coming between noon Monday and midnight, before tapering off into Tuesday morning. Here is the timeline for Denver:

The animation below runs from noon Monday through 6am Tuesday. Note snow first developing across the northern mountains of Colorado and Wyoming/Colorado state line, before dropping south through the afternoon and evening. The heaviest snow will be well east of our area by Tuesday morning, with only light showers and flurries lingering.

Snowfall totals
While this system will be fairly quick moving, it does look like we'll see a period of pretty good snowfall across much of the area Monday afternoon and evening, which should equate to several inches for many of us. The foothills and mountains of Boulder and Larimer counties have been the target of the heaviest snowfall in the modeling, so we'll go ahead and go 6 - 12" here. Generally the further south and southeast you head from there, the less snow potential we see.

For Fort Collins, Loveland, and Denver we'll go with 2 - 4" of snow, with higher terrain to the west and south in the 3 - 7" range. Colorado Springs will be in the Trace to 3" range, with generally less snow potential south of the Palmer.

The placement of the higher totals aligns pretty well with the European ensemble probabilities for 3" of snow ore more – with our forecast for the Castle Rock area being perhaps a bit on the bullish side considering this and a rather non-snowy HRRR model for the Palmer. We shall see.

Travel impacts
The timing of this system looks to be most impactful to your evening commute Monday. Temperatures will be quickly dropping through the afternoon, and as snow develops it will become locally heavy at times.

Plan to give yourself extra time on the roadways, or head home early. With temperatures in the 20s overnight there will be plenty of slushy and icy conditions persisting, even with the late season ground warmth.

Tuesday morning could remain slow in some areas, even as the heaviest snow should be well done. Highs Tuesday will moderate a bit, and we should see travel conditions quickly improve during the day.

Cold!
While we will see some snow, the rather potent cold front will be as much of the story for some of us.

Taking a look at the HRRR model, we see it actually warms Denver well into the 50s Monday morning ahead of the front which is draped over Northeast Colorado. While possible, we think the front moves too fast for us to get that warm – but not out of the question, and would no doubt make the cool off all that more dramatic!

By Monday evening temperatures in in the upper 20s along the urban corridor with snow flying. You can see the cold front quite clearly in the map below as it crashes through Southeast Colorado:

And here are this model's forecast lows for Tuesday morning, teens and low 20s across  Northeast Colorado!

Cool through midweek, then warming?
While the flow aloft will keep us cool through Wednesday, we continue to hope for a nice warmup by the weekend. Another system will pass overhead Wednesday, and keep feature a few more rain and and snow showers across the Plains, but for now the main impact event for the week looks to come Monday and Monday night.

By the weekend we do see some ridging trying to move overhead, which would help temperatures warm nicely... the question is, how long will it last?