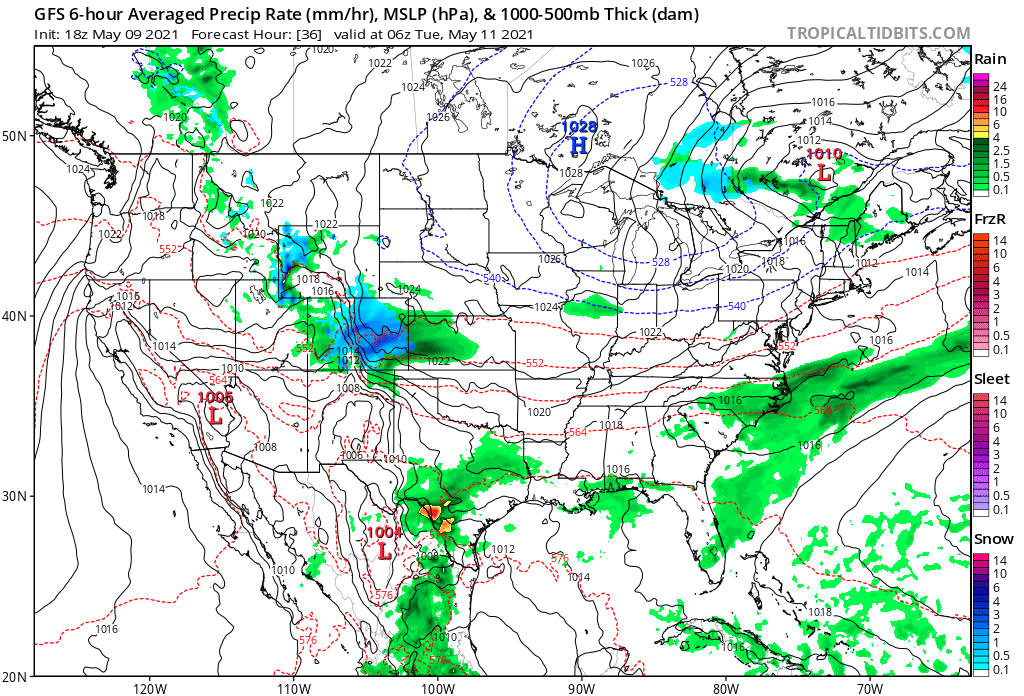 Well, when I sat down to write today's SOTA, in the first iteration I accidentally wrote "Sunday, February 9th, 2021" in the title! Snow is on the mind today as we look ahead to the next several days, with anomalous cold and wet weather in place to end the weekend and start the week.

As Marie Kondo might ask, does this spark joy? Not particularly! The moisture is WELCOME, but trying to weed through an iffy (at best) snowfall forecast in May is tiresome. 🙃

Looking at an updated precipitation forecast map from the Euro shows there hasn't been much change in the modeling from that perspective since our post yesterday. A soggy couple of days on the way for much of Eastern Colorado, with 0.5" to 1.5" for most areas by Wednesday night:

The chilly weather has already established itself across the region after yesterday's front and corresponding storms. As you can see in the image below, we aren't alone here – with much of the country outside of the Southwest and portions of the Southern Plains experiencing below average temperatures this Mother's Day:

By tomorrow evening the center of the coldest anomalies will be focused over Eastern Colorado, and with that our best chance of rain and snow across the area as well:

As for timing, expect to see precipitation off and on really from today through Tuesday, with perhaps the best coverage coming Monday afternoon and evening. The hourly planner below for Denver and the urban corridor shows pretty good odds of wet weather over the coming days, with temperatures in the 30s and 40s through Tuesday.

For Colorado Springs, a similar planner, though temperatures could hedge just a couple of degrees colder than in Denver proper which may prove important on where that rain/snow line ultimately sets up Monday.

A look at our precipitation probabilities shows good odds for measurable precipitation over the next couple of days, before the pattern backs off a bit. Still, not dry-dry as we will often see around here, with more showers and storms in the forecast during the medium range.

So, how about the snow?
This is a tricky call, quite frankly. Models are all of the place, with many of them producing some big time snowfall out of this system across the Palmer Divide and central plains. Most (but not all) show lesser potential within the city of Denver proper which we think is the most likely outcome here, but how much snow we will end up with in the suburbs west of I-25, along the Palmer Divide, the Colorado Springs metro area, and portions of the east-central plains remains very much in question.

For those that do see snow Monday and Tuesday, the greatest impacts will be focused on cooler/raised surfaces (grassy areas and unfortunately leafed trees) vs the roadways which are quite warm given the time of year. At higher elevations the travel impacts may more of an issue, particularly Monday PM and Tuesday AM.

Right now the greatest confidence in where we will see measurable snow is at higher elevations along the Front Range foothills and mountains – as it should be.

Here a Winter Storm Warning as been posted. It goes into effect Monday afternoon and extends through Tuesday afternoon. From the NWS:

* WHAT...Heavy snow possible. Total snow accumulations of 8 to 16   inches, with the heaviest snowfall expected above 7500 feet.

* WHERE...Rocky Mountain National Park and the Medicine Bow Range,   The Mountains of Summit County, the Mosquito Range, and the Indian   Peaks, The Northern Front Range Foothills, and The Southern Front   Range Foothills.

* IMPACTS...Travel could be very difficult. The hazardous conditions   could impact the Monday evening and Tuesday morning commutes.

Given the extremely high uncertainty in how low that rain/snow line ends up, and then just in case it does drop below 6k feet how much snow manages to accumulate, the NDFD snowfall forecast is probably a pretty safe place to be right now. That is, good snow for the Front Range foothills, and accumulating snow across the Cheyenne and Palmer ridges. The PUB office is more bullish on the snow across the Palmer, with several inches forecast for areas north, northwest, and northeast of downtown COS.

A more bullish outlook would be the following, which is a blend of many models. Here we can see the influence some models (like the GFS and NAM which both have widespread heavy snow across Northeast Colorado) are having – but still, even with 8 - 10" (!!!) in the forecast for DENVER from the GFS the blend has the city in the T - 2" range, which is not only more manageable for mid-May, but also more likely.

Still, for areas west of I-25, this solution would mean some 2 - 4" totals (thinking Boulder here) with perhaps 4 - 7" across the Palmer Divide and extending pretty well east along I-70. Even Colorado Springs would need to be watched, with more favorable snowfall for those in the 6k foot range by Monday night and Tuesday morning.

We'll hedge somewhere in between, and watch things closely as they progress tonight and tomorrow. Again, if we are to see snow at lower elevations it'd likely come late in the day Monday and overnight into Tuesday morning. For now, we'll sit with the following, and see how things look tomorrow.

Finally, here are the probabilities for 3" of snow or more between now and Wednesday. If you're living across the Palmer Ridge and east-central Colorado, a good chance you'll be seeing some snow accumulate it seems:

We'll see how things look in the morning.