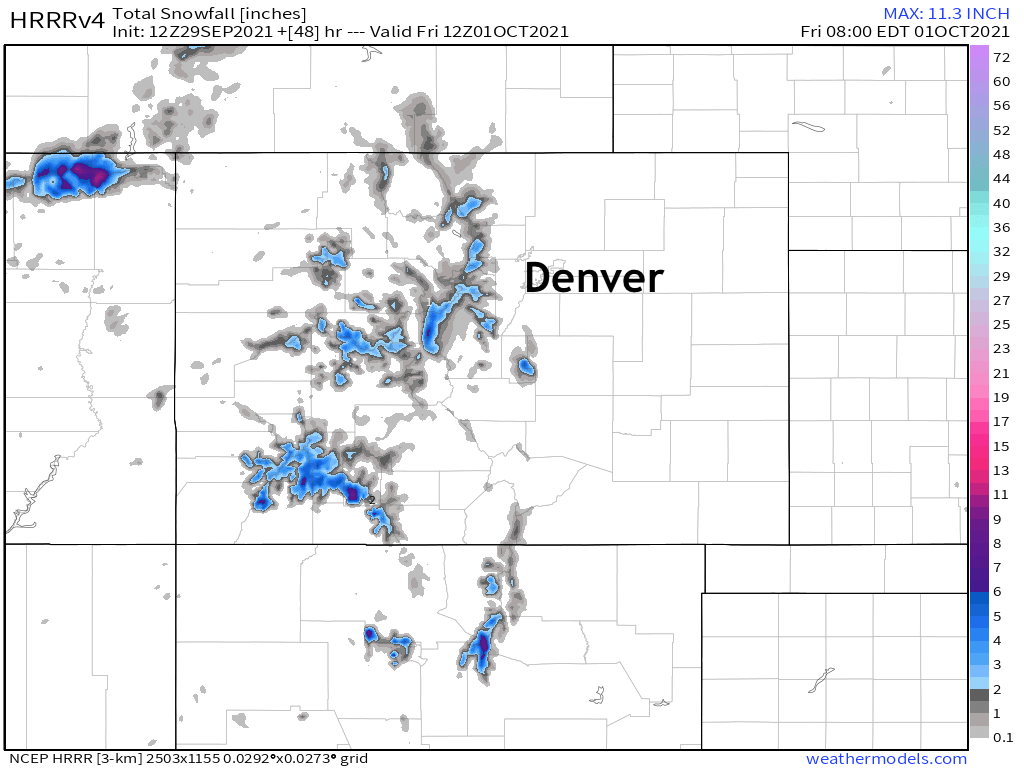 The weather will be feeling much more fall-like to end the month after what has largely been a hot and dry September across the region. After record highs in the 90s in recent days, we will drop to near 70°F in Denver today, and perhaps not break the 60°F mark on Thursday!

With the cooler temperatures, will also come an increased chance of rain at lower elevations, and snow for the higher terrain of western and central Colorado.

The 3-day hourly outlook for Denver shows the cooler weather has arrive and will stick around for a few days, as well as those increased rain chances:

The latest high resolution HRRR model shows precipitation increasing from west to east today before gradually coming to an end early Thursday morning across the northern portions of Colorado, even as another push of heavier precipitation pushes into Southern Colorado (the animation ends at 6am Thursday).

You'll note that most areas will see rain, certainly across Eastern Colorado this is true, but blues and pinks to our west indicate some mixed precipitation and snow for higher elevations by tonight.

As for accumulating snow? It'll likely be confined to elevations above about 10,000 feet, at least for anything meaningful. Some of the higher peaks could see totals upwards of 5" from late this afternoon through Thursday morning. Winter is coming!

As for how much rain we're likely to see? Well, it looks like areas along and west of I-25 up against the foothills will see the best chance for appreciable moisture this afternoon and evening, with totals upwards of 0.25" possible. As you move east of the interstate, those rain chances decrease.

This is reflected in our probabilities, with nice odds for Denver:

but much lower east of town:

Similarly from the HRRR, which has 0.1 to 0.4" for the Denver area, but from 0.5" to 1.5" for the foothills and higher terrain west and south of town. This particular model is quite wet for Colorado Springs as well.

As you can see, however, east of the metro area it drys out quickly.

24 precipitation totals from the European ending Thursday morning show pretty much the same thing, pockets of heavier precipitation for the Front Range foothills, extending over the urban corridor to an extent, but drier east:

As the low slowly traverses east over the coming days, the energy will shift south, with showers sill possible north of the Palmer Divide, but most of the meaningful rain ending up across portions of the Southeast Plains. Friday and Friday night could produce a nice swath of heavier rain across this area should the forecast hold, with this being the current 24 hour rainfall total ending Saturday morning from the European model:

Showers remain in the forecast off and on through Saturday, with high temperatures at or below average through the period.