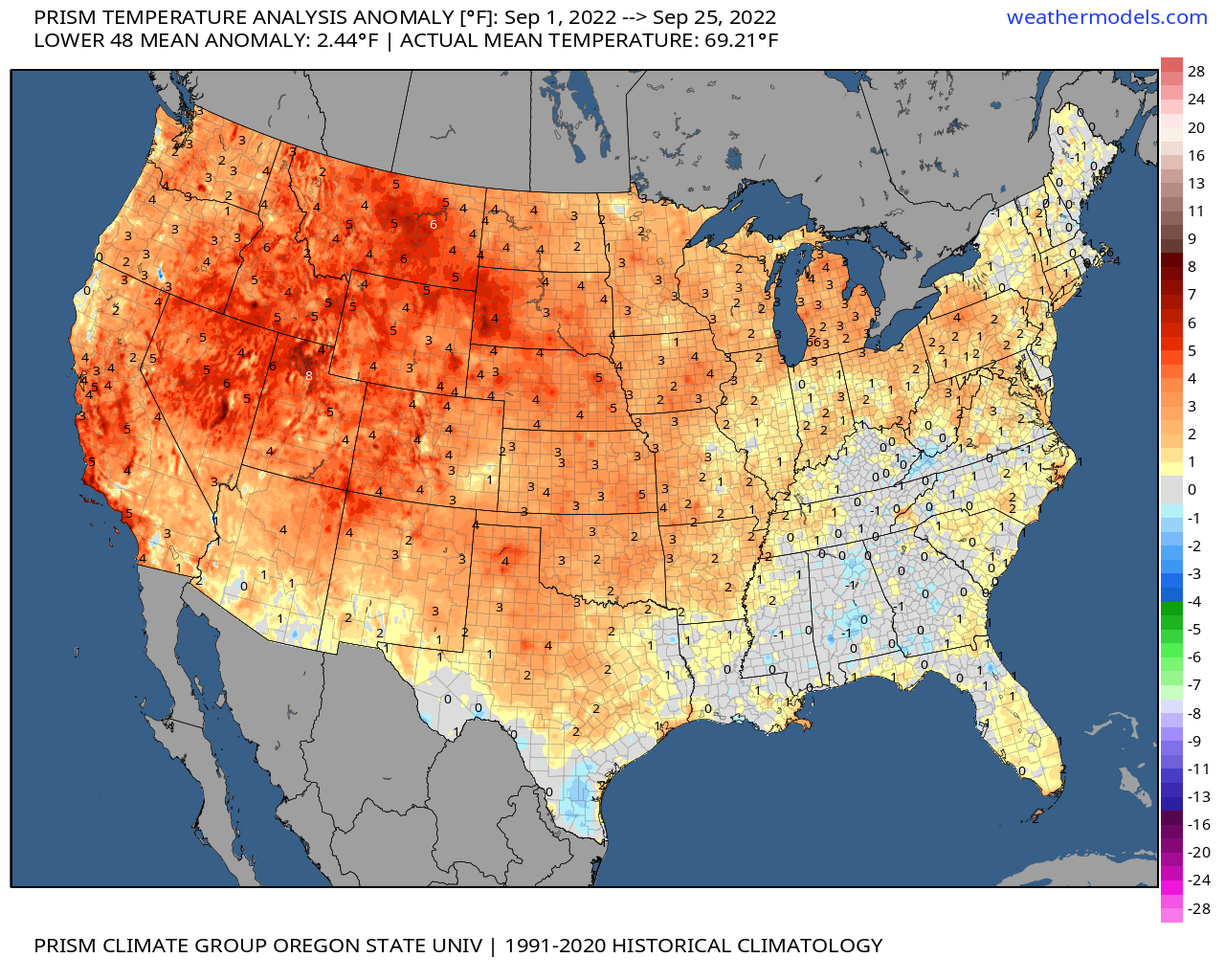 The State of the Atmosphere: Monday, September 26th, 2022

It's hard to believe we are in the final days of September, with October coming on quickly this next weekend. It's especially hard to believe given just how warm we've been compared to average – but what's new?

For Denver, September 2022 is running 3.4°F above average through the first 25 days of the month. While we've had a few cool days (the chilliest was September 10th where the high topped out at 51°F), most afternoons have been quite warm this month, with two days hitting 99°F for highs early in the month.

The Denver area is not alone in seeing the warm temperatures this September. In fact, most of the CONUS has been (well) above average, with the Southeast being the exception. Across the intermountain west, warm... warm... warm.

While nothing too hot is in the forecast through the end of the month, it does look like the Denver area will remain above average each afternoon through Thursday, with perhaps an average to slightly above average day coming on Friday. The average high for this time of year in the Mile High City is 75°F, and we'll be around 80°F to 84°F for most of the week.

You'll note in the planner above more seasonal weather is in the forecast as we kick off October, but by no means does the first week of the month look cold given the time of year. Instead, beautiful weather is on tap, with highs in the 60s and 70s, and lows in the 40s across Northeast Colorado.

Looking at the upper level pattern through early next week we see a couple of features to highlight. The first, of course, is hurricane Ian. Ian will move into the Gulf as a major hurricane on Tuesday, then make U.S. landfall late week somewhere along the west coast of Florida.

Closer to home, we see the ridge overhead over the next severals days that will deliver the above average temperatures to end the month begin to break down by late in the week.

A trough will move across the northern tier of the U.S. Friday and through the weekend, which will drop temperatures across our area for the final day-or-so of September and start of October. As you can see, the trough is not all that strong (indicated by a lack of deep blues we see with the current trough across the Great Lakes/Northeast and Ian), but still enough to break down the ridge and knock back temperatures for our area by the weekend.

What this means for precipitation for our areas remains to be seen. It looks like we could actually luck out with some showers and storms across the state (particularly northern Colorado) Friday through the weekend.

The European ensemble model has a mean forecast of 0.3" of precipitation for Denver from Friday afternoon through Sunday evening for Denver, with a pretty good spread in solutions for that period from much drier to much wetter.

Our probabilities show a similar idea, with an uptick in precipitation chances by Friday and Saturday:

We, like the rest of the country, will be keeping an eye on Ian this week, and of course an eye to the weekend around here to see what trends may appear with regard to our precipitation chances.

For now, get out and enjoy the last days of September, with some very beautiful, albeit warm, weather across the region!