Friday PM Update: Another Chilly Saturday with a Chance for Snow

The best chance for rain and snow this evening will be above 6,500 feet, but there is a chance to some of that makes it into the greater Denver area and south near Colorado Springs. Anything that falls this evening will remain light. 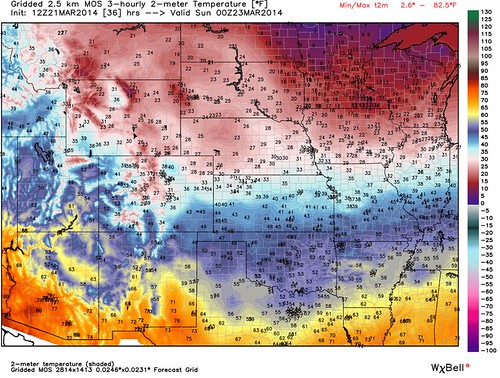 Short range, high resolution modeling does bring two "surges" of snowfall to the area over the next 24 hours. One tonight, and another Saturday evening. There is good consensus between these models and the larger scale models that both of these surges will not produce a whole lot of moisture. The larger scale models prefer the later Saturday round to bring the best accumulation, which seems likely. Should the bulk of any precipitation we do see come during the colder hours of the day Saturday, this would support some accumulation. That said, anything that falls during daylight hours may be a mix of rain and snow and that, in combination with warm surface temperatures, will cut way down on any accumulation.

With the first round, mostly midnight to 7am tonight, the mountains just west of Denver and the Springs may have the best chance at a few inches by the morning, but any accumulation will be minor for the cities.

Additional snow will try to fall during the day Saturday, with that final "push" in the evening before the system clears out by Sunday. All told, a few inches in the high country and another minor snowfall for lower elevations with 0 to 3 inches potential regardless of when it falls.

Keep in mind, that the separation between rounds means that round 1 snowfall will largely melt before the second, so total accumulation by the end of the storm is likely to be unimpressive, just like the majority of storms this year. Denver has yet to have a 4 inches or higher snowfall event this season.

With cloudy skies Saturday we won't warm much at all. Starting in the 20s and 30s, the afternoon will only warm about 10-degrees, before cooler air returns for the evening. An occasional breeze could hit 20-30mph across the state, but this system isn't nearly as windy as the past few.

By Sunday, increased sunshine will push highs closer to 50 for many on the plains. Will have updates as necessary, but please plan for a chilly Saturday and at least some snow!