Another chilly and unsettled Saturday has given way to another beautiful spring day across Colorado today. Temperatures in Denver have warmed to near 60 degrees after reaching just 36 degrees officially at Denver International Airport on Saturday.

Snow totals ranged from just a trace to 2 inches across lower elevations Saturday, with ski resorts reporting anywhere from 3 to 6 inches of new snow.

Another cold front moves through tonight which will drop our temperatures 10 to 15 degrees Monday, and bring a chance of snow showers to the northern Front Range mountains Monday. For Denver, biggest impact will be on the temperatures, as this front looks largely dry. Cannot rule out a stray flurry or snow shower at this time, but not expecting much of anything precip-wise.

Tuesday and Wednesday will be the pick days of the week. Temperatures will warm into the upper 50s Tuesday, with highs near 70 possible by Wednesday across the metro.

Our next system begins effecting the region late Wednesday, and will bring another round of rain and snow to the state through the end of the week. Tough to pinpoint impacts across northeast Colorado at this time as model spread between solutions remains quite large. Both the GFS and EURO are progressive with this system, but the EURO remains much deeper and colder, while the GFS is notably more open. With this, the 12z EURO deterministic was quite enthusiastic with moisture (roughly 0.8" QPF), but it's important to note there was little support at this time from many of its ensembles. For now broad-brushing cooler temps and at least a chance for rain/snow Thursday and Friday, but seeing little reason to get too excited about things at this point. 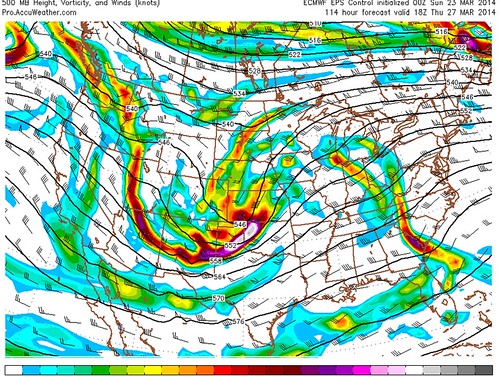 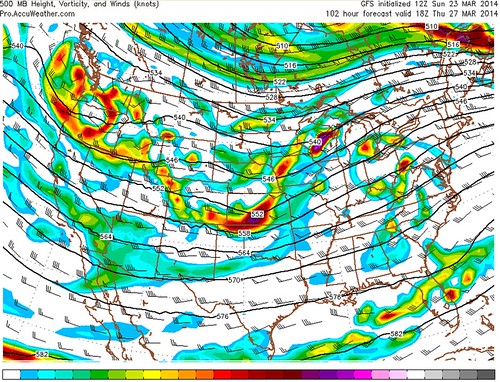 Tempted to favor the EURO at this point, but still plenty of uncertainty with several days to go. We'll see.

Beyond Friday high pressure looks to return, with warmer temperatures for the weekend. Still watching the last days of March and early April for more troughing in the west and a possibly a wetter storm track -- but confidence is pretty low here, so we'll leave that for a later date.

As you well know, I have been talking about the transition to El Niño for months. It has been…

Friday PM Update: Another Chilly Saturday with a Chance for Snow

The best chance for rain and snow this evening will be above 6,500 feet, but there is a…