The saying is probably more fitting for April based on Colorado's history. Then we'd have to shift "April showers bring May flowers" forward a month which is also more applicable.

No, March didn't come in like a fierce lion. It was chilly with highs in the 20s, but the snow was very insignificant. I'd rate the start of the month as an adolescent on the lion scale.

The month as a whole was really just a lamb. Only 6 snows for the month and not one of them over two inches. Considering March's average snowfall is 11.5 inches, our current 5.3 inches is not evidence to support any claim to an active month. The temperatures throughout the month were nothing but ordinary; it was an average month in that regard. (Average to the past 30 years, that is.)

Perhaps if we broaden our view to the state level we can find some stronger lion signals? There have been some good snows this month. Several ski resorts have above normal snowfall on the year, but few of them are above normal for March.

The sad thing about March is that we dried out a bit as a state. Take for example the Upper Colorado Basin. Snow water equivalent has been above average in 2014, but took a bit of a hit in mid-March. Mountain temperatures also ran a very average course for the month.

So, I think the lamb won out this March. However, if we shifted the saying to apply to April would we have better luck? Actually, yes. . . potentially.

Some of the city's biggest snows have come in April. On April 23, 1885 Denver received 23 inches from a storm. Here is the top snowstorm list for Denver -- look at how many occurred in April!

April of 2013 had over 20" of snow, but also followed a very snowy March with 23.5" of snow. The pattern last year was just more favorable for big snows. That's not to say it can't happen, especially if we have a pattern shift in the coming weeks with a developing El Nino to switch our storm pattern to a southwesterly one.

The PNA doesn't support that southwestern storm pattern shift in its 14 day forecast: 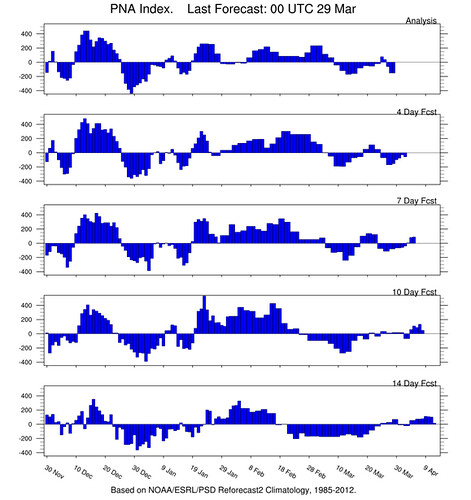 As snow lovers, we are clinging to hope for a midweek system to hit in the first few days of April. I think the "clinging to" may end up being a "desperately holding onto" over the next few days.

This incoming system has a lot of the right ingredients to work with. It has energy throughout the atmosphere, at times a closed surface and 500mb low, a swath of cold air to the north, and moisture. The determining factor this time will likely be two-fold: speed and path. 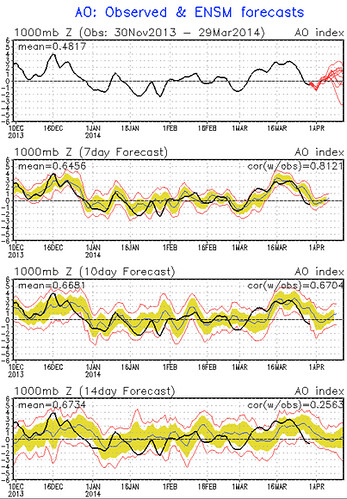 Too early to offer too much certainty around this system, but certainly one to watch as we head into the work week. We'll of course keep you posted as the system approaches, and update as necessary with trends in speed and path.

As you know, we spent much of the last month with one eye on the end of March and…

A Warm Last Weekend of March