Warm and Windy
We've got Tuesday as the pick day of the week temperature-wise this week, though none of the next five days look particularly chilly. The average high this time of year is 63 for Denver, we'll better that each of the next several days, with highs near 80 degrees on Tuesday.

The big downside to the warm temperatures through the middle of the week will be the breezy conditions across the state. I would expect we'll see a Red Flag Warning get hoisted for portions of eastern Colorado by the middle of the week as temperatures will be warm, humidities low, and winds gusty. There is already a Fire Weather Watch in effect for much of southeast Colorado for Wednesday.

Severe Weather Threat
Despite all the mild temperatures, our storm track remains active. We saw some rain this last weekend, and there's a chance we see more by the coming weekend -- even an outside chance we see a good soaking storm.

First we'll be tracking a severe weather threat across Texas, Oklahoma, and Kansas as we head into the Wednesday (day 3) timeframe. As it stands right now, impacts on the severe weather front from this system appear low for Colorado -- but proximity reminds us it's the time of year when severe weather starts to become more common here in Colorado.

The Storm Prediction Center has issued a "slight risk" outlook for the areas outlined below. 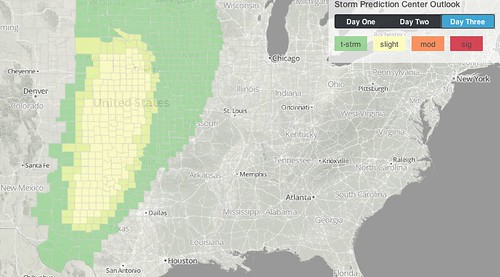 The biggest threat at this time appears to be for hail and damaging wind. That said, there will very likely be tornadic activity with this severe weather outbreak -- so if you live within the highlighted risk area, or have travel plans that take you across this area Wednesday, please make plans accordingly. We'll continue to update as the week progresses.

Weekend Soaker?
Our focus across northeast Colorado quickly shifts to next weekend after Wednesday. The GFS operational has been remarkably consistent in bringing a big upper level trough across the state this weekend and plentiful moisture. In fact, it's 12z brings more than 1.5" QPF to DEN Sunday through Monday night. This would mean a big time rain event for lower elevations and likely a good late season snow for higher elevations.

Plenty of uncertainty remains with regard to this system. That being said, even the deterministic ECMWF appears to be trying to come around to a bit wetter solution for the state after being largely dry previous runs. The GFS ensemble control run also looks more promising with it's 12z run, though ensemble members have been rather all over the place over recent days. Here's a look at the GEFS ensemble control run at 500 hpa for this coming Sunday -- a mean upper level low tracking across Colorado. Eventual track will be a huge factor with this system.

The differences between the GFS and EURO are significant enough that it's worth a good degree of caution before getting too excited about this system. Also let's keep in mind we are still nearly a week out, though this trough has been on the radar for some time.

Here's a look at the 0z EURO (left) and 12z GFS (right) at 500mb for next Sunday. Notice how much deeper and slower the GFS is compared to the EURO. 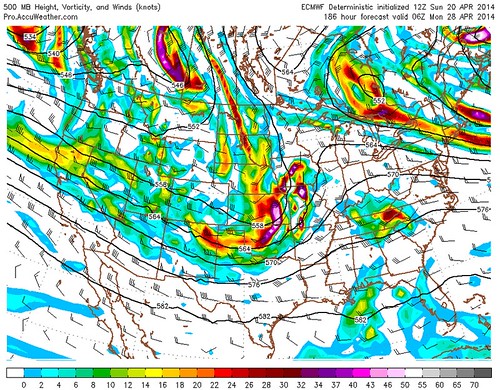 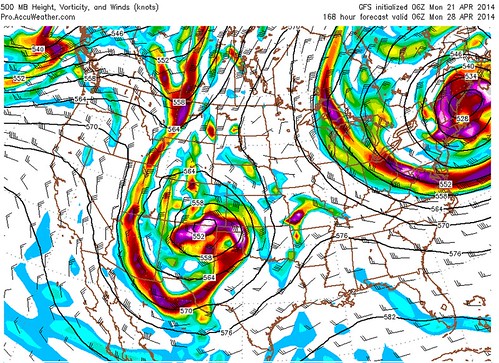 Somewhat surprisingly I might actually be favoring a deeper solution with this system as the GFS is trying to do over the faster more open solution on the EURO. One reason for this is it's clear the EURO has been trying to move toward a deeper solution over the last few runs. Another is that there might be enough blocking out in front of this system to slow it down. Even the Canadian that comes in rather unorganized, but then slows and deepens as it moves across Colorado Sunday -- a solution that would actually favor eastern plains over Front Range communities.

A lot to watch over the coming days. It's fair to say the State of the Atmosphere is active! We'll push updates throughout the week.

Watching for the Chance for Storms this Easter Weekend

A relatively warm weather pattern will stick with us through the weekend and into early next week. Temperatures Friday…