Early this morning the National Weather Service in Boulder issued a Winter Storm Watch for what could be a significant late season storm for the Front Range mountains and urban corridor. Snowfall is looking increasingly likely Sunday, and given the time of year it is, any snowfall accumulation could prove very destructive to leafed trees.

Confidence in snowfall accumulation is much greater above 7,000 feet, but all models have accumulating snow in Denver with this storm. Given the rain vs snow uncertainty for the city, totals currently range anywhere from 2 - 16" depending on which model you believe, while totals at higher elevations could easily be in excess of 10".

Now, we understand that you may see that range and laugh, or say that "boy, you guys are really pinning yourselves down". Please keep in mind that there are more variables with this storm versus a usual late winter or early spring storm. The temperature is more of an issue, the warm ground is more of an issue, and many times the models will struggle to handle an unusual storm at an unusual time of the year. You will see that reflected below. . . We are analyzing each model run to build a consensus of how much water will fall. With that baseline, we can begin to forecast valid ranges of rain vs snow that best match the temperature guidance for Sunday and Monday.

Moisture:
This storm could be significant even for those who see less snow and more rain. All of the models show a significant precipitation event unfolding across the region to varying degrees. Precipitation totals look like they will range between 1 and 2 inches for northeast Colorado before things are said and done.

The NAM absolutely dumps precip on areas that do-not-need-it to the north and west of Denver, the JMA also has the core of heaviest precip extending from northwest of Denver northeast to Nebraska. 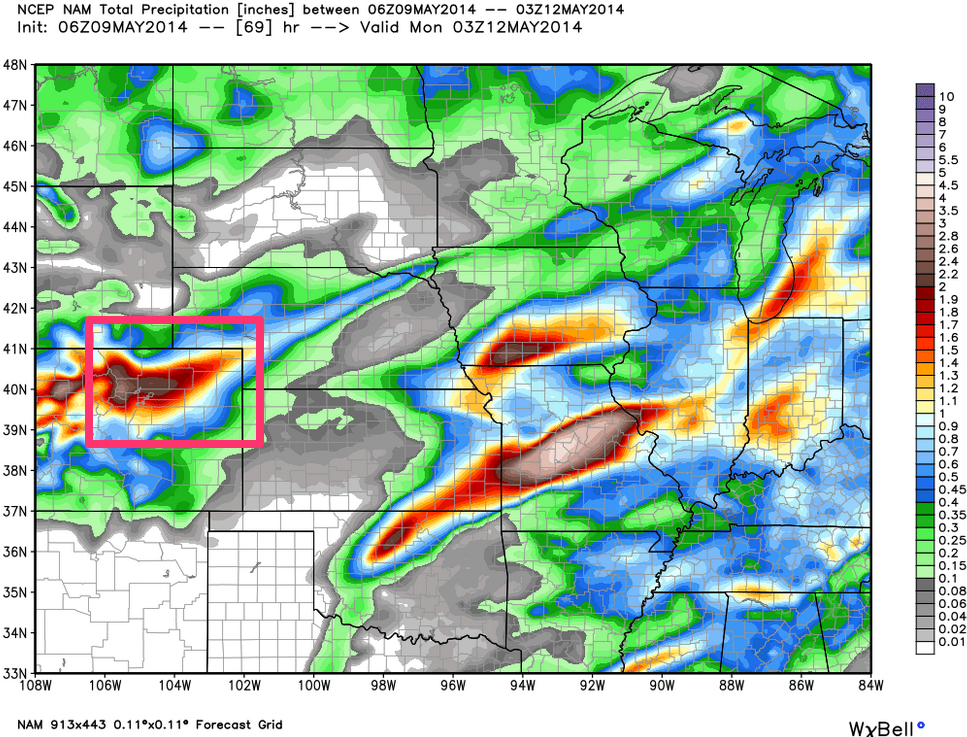 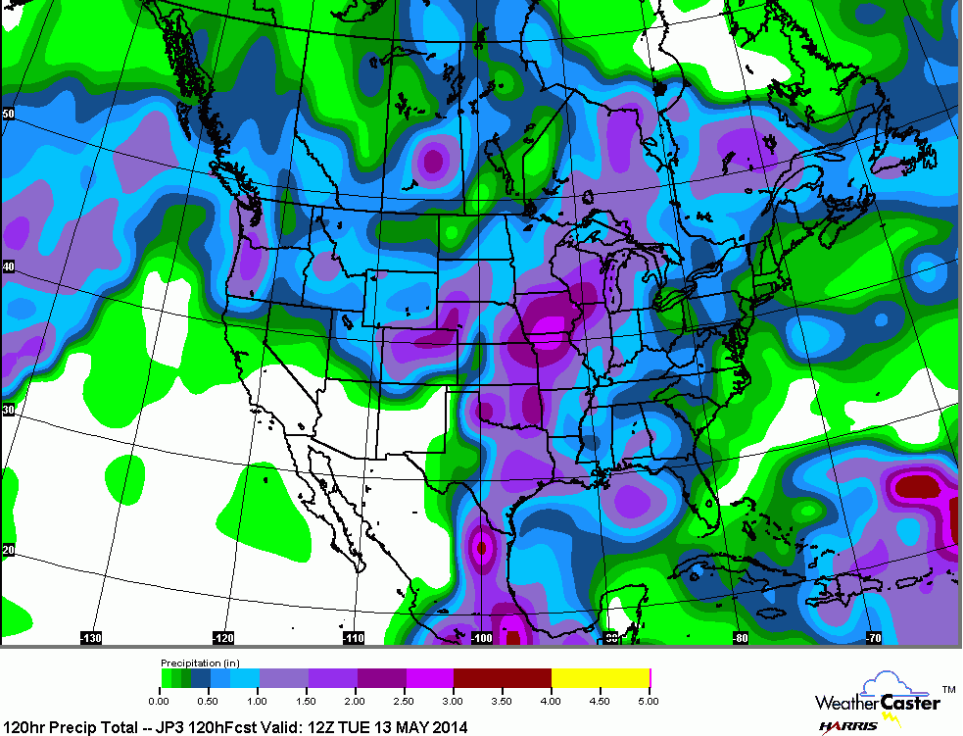 Upslope:
As one of us put it, the 700mb upslope reflected by the models with this storm is intense. That upslope at 700mb is a key component of the storm that is responsible for producing such high moisture totals. Plus, the upslope will likely be two fold: 1) east to northeast flow at 700mb on the front side of the storm, 2) strong northerly flow (upslope on the Palmer Divide from Denver to Monument) behind the cold front. This factor alone will likely keep the snow going for an extended period of time for the Palmer Divide, which is one of the prime locations to get smacked east of the mountains.

Strong Cold Front & Convection Potential:
Another element of the storm that is impressive is the strong cold front and subsequent cold air. That cold front will likely touch off convection (stronger bands of rain/snow showers, possibly with thunder) which could enhance precipitation rates. This could act to drag colder air aloft down to the surface, which could change the rain to snow in a more rapid manner. With higher snowfall rates being possible, this could also reduce some of the melting and make for better accumulation potential. While snow will readily accumulate on the grass, trees, and anything elevated off of the ground, the ground is still very warm and needs to be sufficiently cooled for the snow to accumulate. The heavier rates of snow could possibly achieve this. . .

Elevation and Proximity to City Warmth:
Folks that live away from the core of city warmth, and those that live at a higher elevation will also have a much greater chance at achieving higher snowfall totals. Locations on the west and southwest side of Denver, in the foothills, and on the Palmer Divide seem primed for some decent snow totals. Thus, the 4 - 9" inches the National Weather Service has posted in the Winter Storm Watch area may not be unreasonable if the more favorable elements that we have just discussed become reality. In fact with a colder storm, amounts over 9" in those favored areas that we just mentioned may be common. Keep in mind, the difference of a few hundred feet in elevation, and distance of a few miles will greatly impact how much snow you see. As with our other recent spring storms, the more rain you see Sunday, the less snow you'll see.

Duration: Models are somewhat split on how fast the storm moves in and moves out. It appears that rain will get going Saturday evening for parts of northern Colorado, but will wait for the stronger cold front to arrive on Sunday to really get with it. Once the cold front arrives on Sunday morning (earliest), rain will likely change over to wet snow for many areas, with precipitation rates ramping up. The elements discussed above then come into play to determine how this storm will unfold.

Snowfall Forecast:
The nature of this group is to offer a certain degree of caution when it comes to these systems and how much snow we will see in Denver. Keep in mind. . . it's been very warm, and with that surface temperatures will do a great deal of melting especially before sunset on Sunday. We'll be issuing a snowfall map soon.

Our biggest concern impact-wise with this system will be for all the trees with already a tremendous amount of leaves on them. Higher end snowfall totals would be catastrophic for them, so let's hope for the lower end. We will be watching the models closely for changes in path and strength, as those two factors will have a HUGE impact on snowfall amounts and the locations of the heavier snow.

Given the uncertainty that remains, especially at lower elevations, we'll hold off on a snowfall totals map for now. We'll continue to monitor developments today, and get an initial forecast very soon. A lot to watch over the coming 24-36 hours, so as always, stay with Weather5280 for all the latest.