After a mostly quiet winter season, our weather pattern got active in April and has remained quite active into May. We have talked about this at length, and got a bonus huge -- Mother's Day -- storm to boot. If you follow us here @weather5280 you were well informed about the overall active pattern and the big storm itself. Many are asking if the rest of the month will remain active, which is what I'll address right now.

Here is a look at the 500mb atmospheric pattern that the GFS and ECMWF are showing starting May 20th (GFS will be first, followed by the ECMWF image for the same timeframe) 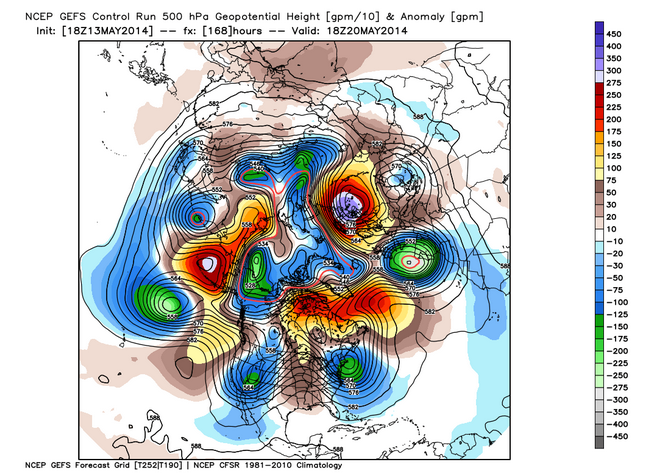 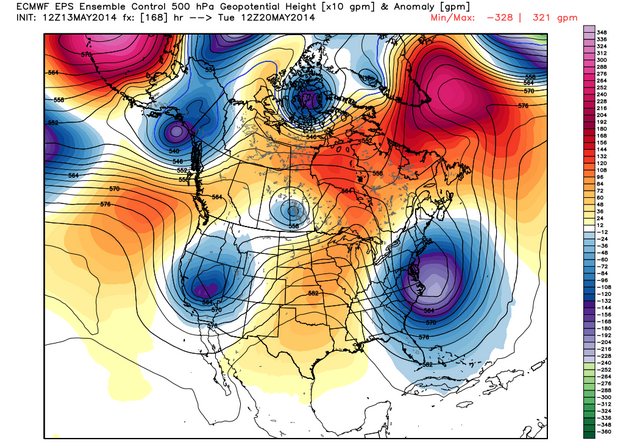 Notice that the two models are pretty much spot on with deep and closed low pressure over the Great Basin. The GFS is a bit farther east, but differences aren't huge, especially for this time range. 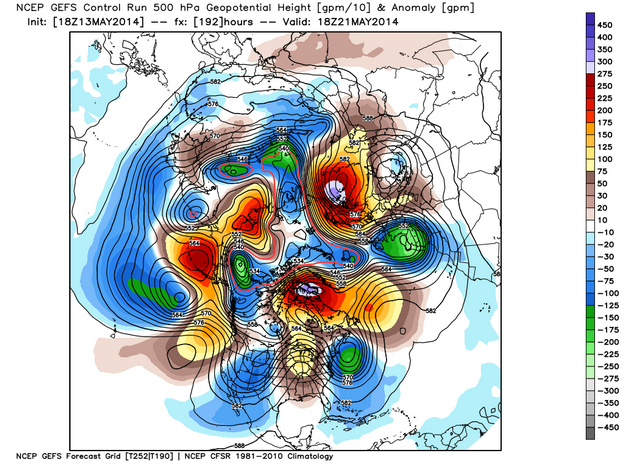 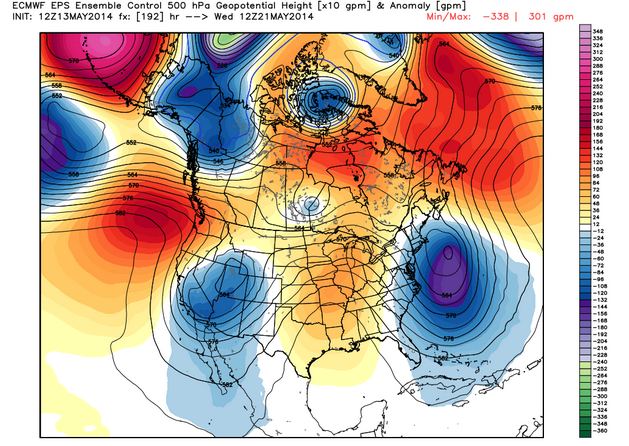 This is where the differences start to show up. Notice that the GFS moves the low into Southern Wyoming, while the ECMWF keeps the low farther west over Utah. East of this low is a nice ridge of high pressure that extends from the Gulf of Mexico to Hudson Bay. East of that ridge is a strong low pressure just off of New England. That my friends, is called an Omega Block. The pattern is shaped like the Greek Letter Omega, and is usually responsible for producing a slow and backed up pattern. So if I were a betting man, I would bet on the ECMWF's slower progression of the storm -- just for that simple reason. For fun, let's look at the following days to see how it plays out. 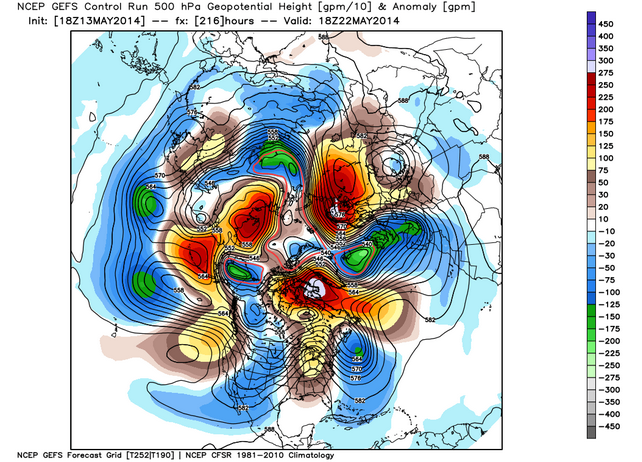 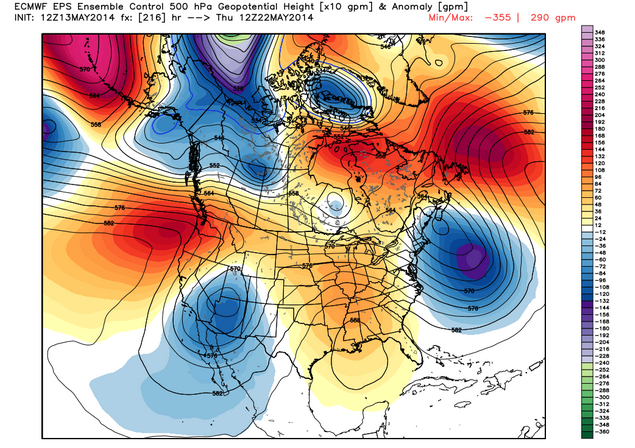 See the major differences now? Both models essentially have the same pattern, but the GFS takes the core of the initial storm to southern North Dakota, and leaves some remnant troughiness back to the southwest. The ECMWF keeps a nice consolidated closed low over northwest Arizona...again, slower progression due to the blocked pattern. 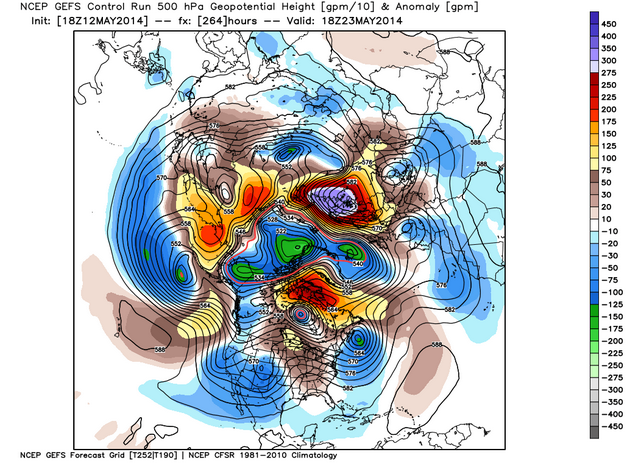 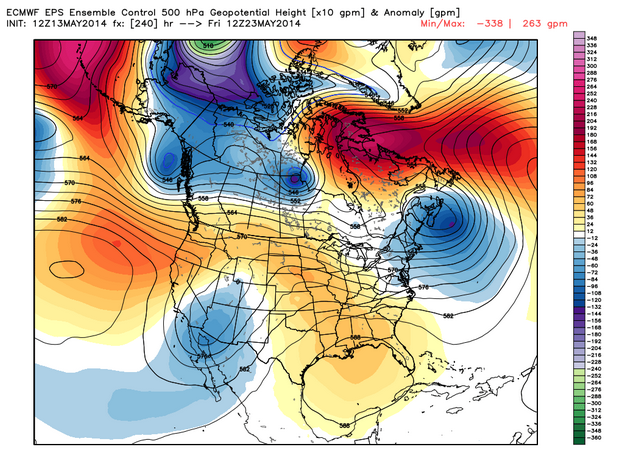 On the 23rd, the GFS brings out the remnant energy it had lagging behind as a negatively tilted but weak closed low over Colorado. The slow and steady ECMWF, keeps the bulk of the energy back to the southwest over Arizona. To me, it seems that the GFS is having a harder time resolving the strength of the ridge that will exist over the Midwest and The South. The ECMWF seems to think it and the farther downstream low will act to create a stronger block and thus a slower pattern. 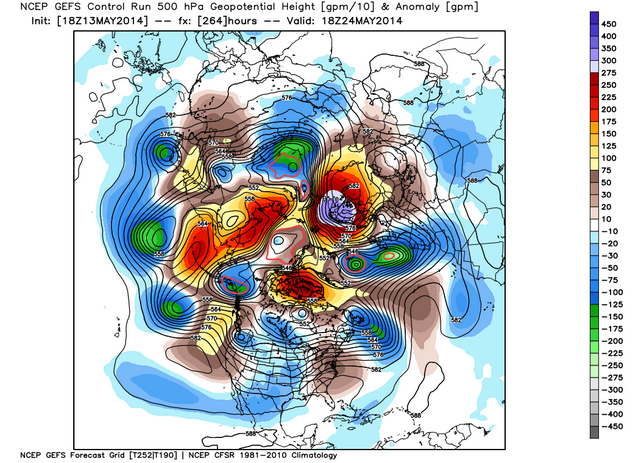 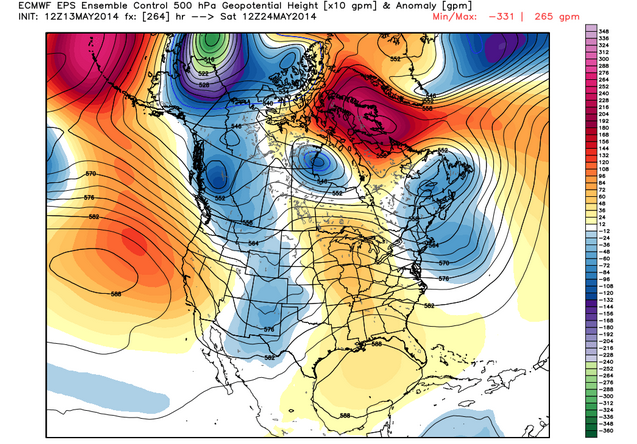 On May 24th, the GFS has a very messy' yet flat pattern, while the ECMWF has the main energy that has been stalled in the Desert Southwest moving through the Southern Rockies. The whole while, it is maintaining the integrity of the blocking pattern that exists downstream. Again, this is why I see the ECMWF as being the winner from the 20th through the 24th. 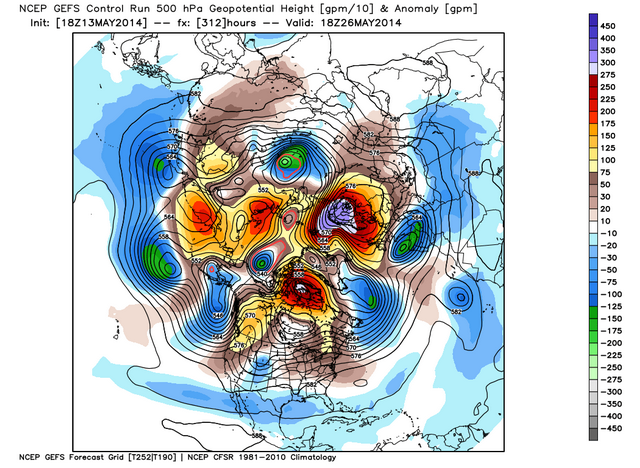 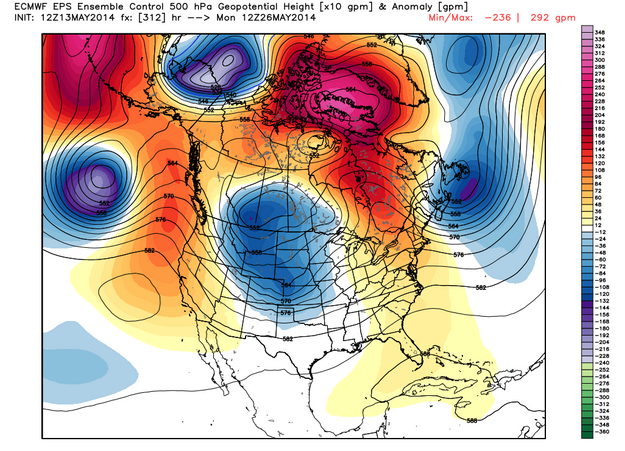 Fast forwarding to the 26th, notice how the GFS already brings in another system to Northern Colorado. The ECMWF seems to combine/phase the energy that weakened and came out of The Southwest, with the next storm dropping southward from Canada. Which is correct? I am still betting on the ECMWF. . . 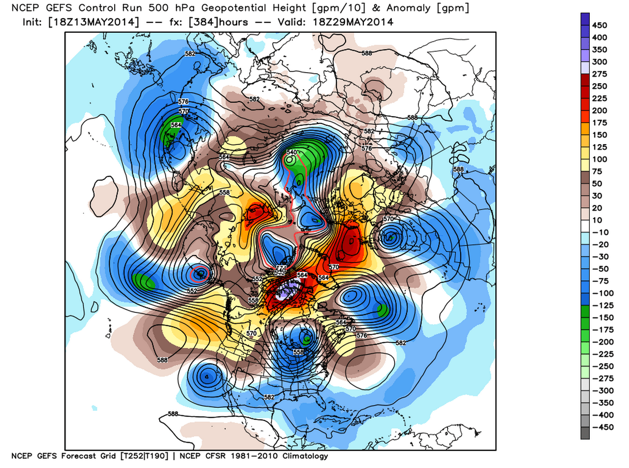 A last look at the GFS shows the storm moving into the Midwest/Great Lakes and leaving us pretty quiet. However, notice the next strong and closed low just off the coast of California...that appears to be the next storm in the pipeline.

What does all of this mean? Well, there is a lot of talk on social media about the upcoming active pattern and the possibility of a lot of rain/snow for Colorado and big severe storms to our east and I felt compelled to share the details with you. While a lot of folks are betting on the GFS to give them this active weather pattern, I think it will be the ECMWF in the end that gives the more accurate forecast.

The blocking will be an issue, which means a slower pattern should be the favored one. I would expect the GFS to jump on board with this in the coming days. The devil is always in the details, which are too far down the road to really know at this point. However, anytime there is a strong and closed low to our west in late May, chances are we will get some moisture. It is how we get that moisture and when, that we will have to resolve over the coming days.

GFS Scenario
If the GFS were to pan out, there would be several chances for showers and storms at lower elevations, with rain and snow at higher elevations. Because it also brings some pretty significant energy through Colorado, we would likely have bouts of strong to severe thunderstorms too.

In recent runs, the GFS had been targeting all of Eastern Colorado with some significant rain totals between the 20th and 29th. . . EVEN THE SOUTHEAST PLAINS! The GFS setup would also produce repeated rounds of severe weather in the Plains and Midwest. . . tornadoes, large hail, flooding rain, the whole nine yards.

I continue to think that the number of chances for moisture are a bit overdone. That being said, I think the amount of moisture the GFS is putting out could be in the ballpark. Why? See below. . .

ECMWF Scenario
The ECMWF model is slower in moving the storm out of the Desert Southwest, but it is also a bit more consolidated and farther south than the GFS. That would mean less chances for moisture, but possibly one bigger and more significant event than the GFS is showing. With the ECMWF, everything would be on the table for Colorado between the 23rd through the 26th, with the best show between the 23rd and 24th.We could even see possible heavy snow AGAIN in the mountains, with significant thunderstorm activity east of the mountains; moisture would not be in short supply either, as Gulf of Mexico moisture would make it to Colorado to meet up with this storm. This storm is a lot warmer than the Mother's Day Storm, so I highly doubt we would have snow at lower elevations. On the backside of the storm, we would remain cool, windy, and possibly showery, as the storm wraps up to our north and east.

I know it is a lot to digest, but this is how we figure out the weather. It is easy to just look at the storm and follow a particular model. However, to truly figure it out you have to look at other things that the model is forecasting; sometimes those things are less sexy than the actual storm, but in the end determine exactly what that storm will mean for you.

We'll be updating you on the progress of this pattern in the coming days...

Chance of Showers and Storms Next Two Days, Warmer Temps by Sunday

We've seen rain and snow showers all week across much of Colorado, but those have been spotty at best,…

Rain changed to snow across the urban corridor early Sunday morning and continued for many through early Monday. The…