One of the biggest tools the National Weather Service (NWS) relies on when issuing severe weather alerts is a network of trained spotters for visible ground truths of what a storm is doing beyond what's indicated on local radar. Spotters, trained by the NWS as part of their SKYWARN program established during the 1970s, can be an incredible asset during a severe weather event. The reliability of this asset, however, relies on spotters a) keeping fresh on their understanding of what they're actually seeing, and b) passing along accurate and timely information to their local NWS office.

The weather is a complex animal. Understanding what you're looking at, and accurately disseminating that information in a timely and concise manner, can be a challenge with a rapidly evolving supercell, especially in a highly populated location such as Denver. With the emergence of Twitter and other social media channels, information can travel at an incredible rate -- regardless of its accuracy.

It can be difficult enough to understand what you're seeing when observing a storm with a naked eye, let alone through an image on Twitter. For example, say that a trained spotter or meteorologist tweets an image of a cloud and claims that the cloud is a funnel, tornado, or what-have-you -- it can be difficult to verify that claim based on a single still image. Is it rotating? Are they seeing something we are not? Is it a wall cloud or just a low cloud? Like in a game of telephone, this information can quickly become jumbled.

Saturday tornado warning, briefly
Saturday night (5:33pm) Weather5280 received a report of amateur weather radio chatter of a possible funnel southwest of Denver. Having a good visual of the storm I was immediately skeptical; radar supported my skepticism. Before I could respond with my doubts -- the NWS had issued a Tornado Warning on the storm, which we had to run with -- at this point it is assumed a trained spotter or meteorologist had a better vantage of the storm and/or radar was indicating circulation.

Where the breakdown occurred is unclear, as the storm probably should never have been tornado warned. The NWS in Boulder has a great responsibility in issuing these warnings, and overwhelmingly does a fantastic job in doing so. The combination of misinformation from ground-truth spotters, the rather complex set up, and large population in the storm's path, were likely all contributors in prompting the warning -- right or wrong. Had the storm produced a land spout or otherwise, the NWS would have certainly had questions to answer regarding why no warning was issued.

The storm was outflow-dominant. Where the clouds were looking most ominous is also not typically where we'd expect a tornado to form. Radar was not indicating clear rotation. The storm looked scary, the clouds were low, and there was enough hail to probably support a severe warning, but not a tornado.

Whether a tornado warning should have been issued Saturday evening may now be a moot point. This is how it goes sometimes. The question is whether or not this is one one-time event, or if our communication channels for severe weather are in fact at issue. Last week was filled with bogus reports to the NWS in Boulder, which can be terribly difficult on their end to dissect, and is seemingly an unfortunate trend of the times.

Here's a look at the tornado warned storm Saturday. 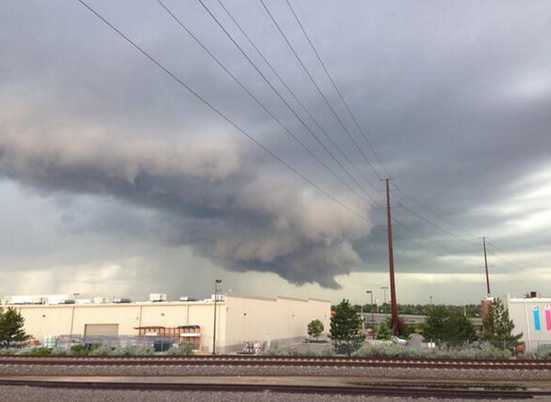 Settle down Colorado, we know weather. Right?
It was no doubt a wild week of weather across Colorado. We've been talking about this for weeks now. Has it been anything we're not prepared for? Has it been anything we haven't seen before? Let's not act like these are the first severe storms we've ever seen -- Colorado sits primed for severe weather every spring and summer.

Unfortunately, as storm chasing becomes more popular, there is a certain segment of the spotter community that either a) doesn't care about broadcasting misinformation or b) doesn't know the difference.

This caption shared by Central Nebraska Stormchasers Wednesday might take the cake for biggest offender of the week. The caption reads "large violent tornado Denver Colorado". This, as @stormpics correctly points out, is #notatornado, but rather a whole heck of a lot of rain and hail.

This!! MT @stormpics This is how you lose credibility, misinform & panic the public. #notatornado #embarrassing pic.twitter.com/czlo7IE76V

Less detrimental, but highly annoying is also the refusal for local media to report tornado "reports" as what they are: reports. In fact, they are classified by the SPC as PRELIMINARY, meaning much of the time they haven't been checked for duplicates or false reports, but are taken straight from the spotter that has called them in. If you inspect last week's notes, you'll see several that are likely duplicate reports, and or hardly reassuring confirmation that spotter calling in the report actually had a visual of the tornado they were reporting. How many pictures did we see of actual tornadoes out of Colorado last week? I suspect final numbers from the SPC will look quite different.

What we tend to forget these days is that if you don't know, THAT'S OK. The beautiful thing is, you can ask! Community and spotter reports are incredibly valuable during a severe weather event, but if you're unsure, go ahead and share them with a thread of uncertainty, rather than matter-of-fact.

Funnel cloud vs Tornado
In short, a funnel cloud is a rotating funnel-shaped cloud that has not made contact with the ground. A tornado usually begins as a funnel cloud, becoming a tornado when contact is made with the ground. For an excellent read on the different types of clouds one might see associated with a severe thunderstorm, take a look at this post from our friends at the Capital Weather Gang a few years back.

From the NWS glossary site:

Funnel Cloud A condensation funnel extending from the base of a towering cumulus or Cb, associated with a rotating column of air that is not in contact with the ground (and hence different from a tornado).
Tornado

A violently rotating column of air, usually pendant to a cumulonimbus, with circulation reaching the ground. It nearly always starts as a funnel cloud and may be accompanied by a loud roaring noise. On a local scale, it is the most destructive of all atmospheric phenomena.

"RTs > accuracy" (@islivingston). Retweets are greater than accuracy -- now doesn't that seem to be the truth. The fact of the matter is, the weather is impactful and dangerous enough that more often than not we don't need to stretch the truth in order for the "wow factor." If you're having trouble on social media, do us all a favor and find a new approach rather than hype and misinformation abuse.

Twitter can be an exquisite and powerful tool, but only when used effectively and honestly. Mistakes do happen, especially during the rush of getting information out in a timely manner during a severe weather event.

If you're interested in learning more about severe weather and becoming a trained spotter for the NWS, I'd strongly encourage you to attend a spotter training class. Even if you don't want to report, these classes are very informative of what to watch for when severe weather hits.

When it Comes to Drought Relief, El Niño isn't the Only Player

We have addressed El Niño in previous posts, and what it could potentially mean or not mean, in the…

Memorial Day Update: Warmer and Drier for Tuesday and Wednesday

A quick update today to look at the rest of this short work week. Showers this afternoon have been…