A look back at June
Denver has seen very typical June temperatures this month (as of press time, we're running -0.2 degrees below 'normal') with 92% of normal precipitation at Denver International Airport. Because of the scattered nature of convection this month, most areas in the Denver metro area have seen near -- or in some cases, above normal precipitation. 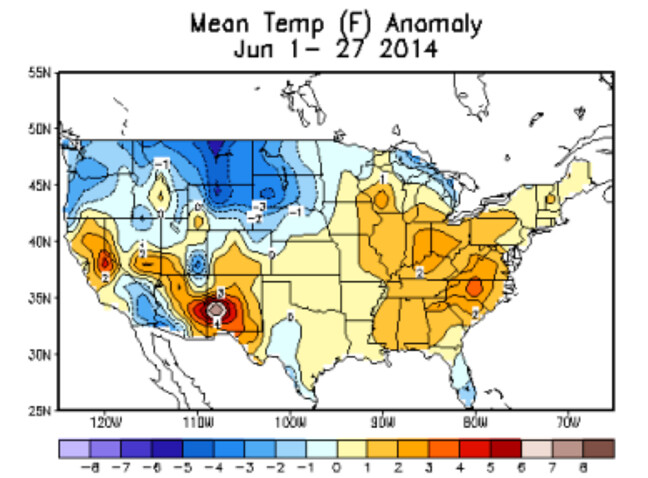 As a result, wildfire risk overall is substantially lower than last June statewide. Why? This time last year 100% of the state was seeing at least abnormally dry conditions or worse, and nearly 80% of the state was experiencing severe drought (or worse!) conditions. Fast forward to this year and less than 50% of the state is experiencing abnormally dry conditions or worse, and less than 20% is seeing severe drought (or worse) conditions. That's a major improvement, and one that should translate to a substantially lower wildfire risk as the summer wears on (compared to last summer). 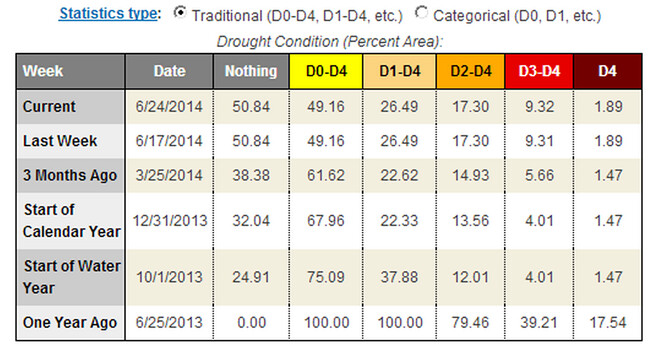 The month of June has seen a range of temperatures from 42 degrees (near-record cold on June 15) to 94 degrees on June 26. Including today, we have now seen 5 days this month/season featuring >90 degree readings. Compare this to last June, when we saw 14 days >90, including one 100 degree day, and you can tell that this June has been far more tolerable heat-wise than June of 2013!

Sneak peek at July
My focus in this post is not so much on the month ahead -- in case you missed Brian Bledsoe's post earlier this week featuring a long-range and monsoon outlook you can check it out here -- so much as it is on the weather for the week ahead. That said, based in part on near-normal temperatures and precipitation in June, and the expectation that our forthcoming monsoon may get active mid-to-late month, odds favor near or somewhat below normal temperatures across the greater Denver metro area during the month of July coupled with near to somewhat above precipitation. (There is a strong linkage between soil moisture levels and air temperatures during the summer months.) 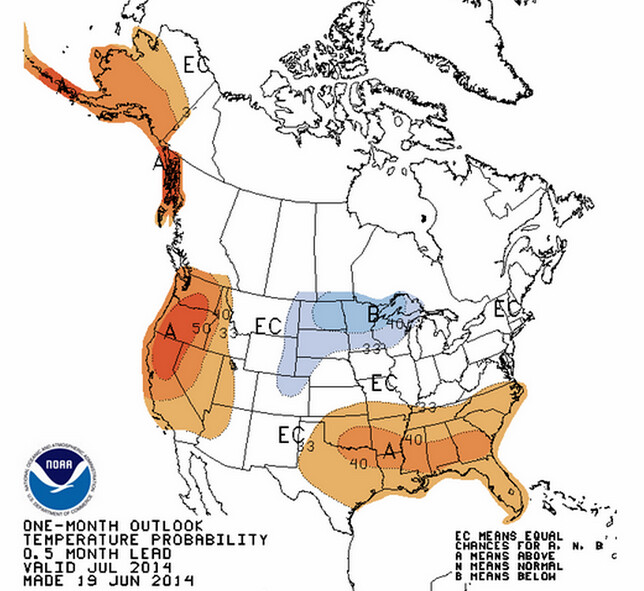 The week ahead
Sunday's hot temperatures more or less presage the conditions we can expect much of the week ahead, with the notable exception of a respite from the heat Tuesday into Wednesday. Crunching the numbers, I expect temperatures Monday, June 30 through Sunday, July 6 to average near 88 for highs and 58 for lows -- which would make the week, on the balance, almost exactly near 'normal' compared to climatology. Let's break it down day by day. . .

Monday will be quite warm and predominantly sunny with little or no chance for precipitation. Highs will be near 90, but a mostly dry cold front will push through the region during by mid-day. That will bring in cooler air from the north by Monday night, with very pleasant overnight lows in the low-to-mid 50s.

Tuesday will be a peach of a day, with mostly sunny skies and temperatures only topping out in the mid-70s -- well off the normal high for the date in the upper 80s. There is a slight chance for some scattered thundershowers to develop during the late afternoon or evening hours, but most locations will remain dry. It will be quite comfortable Tuesday night, with lows primarily in the low 50s. (Note 850mb temperature anomalies below as a result of dip in jet stream to our north.) 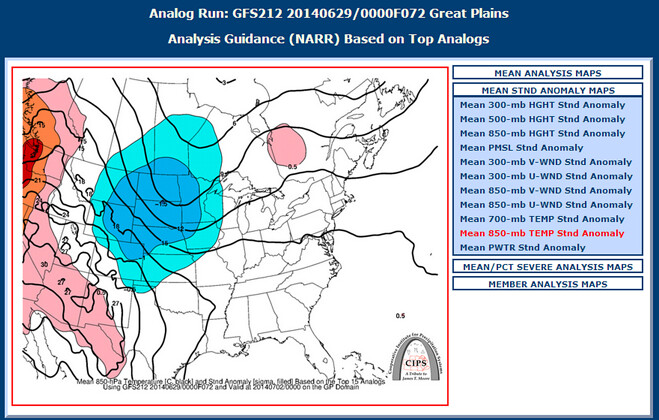 Temperatures will rebound a bit on Wednesday, with partly to mostly sunny skies, but we'll still be below normal, with afternoon highs in the low 80s and overnight lows in the upper 50s. Again, we stand a slight (<20%) risk of scattered late day thundershowers, but as with Tuesday, most spots stay dry.

Temperatures will be noticeably warmer on Thursday as southwesterly flow aloft takes over. Highs will be near 90, with comparatively mild overnight lows near 60.

July 4th weekend outlook
The outlook for Friday, July 4 and the long holiday weekend is for mostly sunny skies and slightly above normal temperatures. Expect highs Friday through Sunday to be in the low (to possibly mid-) 90s, with mild overnight lows in the low 60s. Each day features a low chance for scattered thundershowers, but at this time I do not expect any organized severe weather threats over the weekend at this point.

Having grown up in Colorado, the past spring and start to summer remind me of those in the 1980s…

Given the fact that our spring and early summer, together, have given us some much needed moisture (for most…