Stormy Outlook for Colorado Through the Period

As we discussed on Monday, Colorado is entering a more active period for afternoon storms after a brief lull to start the month. We have chances for afternoon storms in the forecast each of the next seven days, with a few of those days being very good chances. If you missed Brian Bledsoe's monsoon outlook from late June, definitely check it out as it outlines what we think will be a good monsoon season for much of the state.

Today's storm chances may end up being the lowest of the next several days for the Denver metro area. With that said, storms that do develop could become severe, especially east of the Denver area. While analogs would suggest the severe threat may be greater than currently forecast for Denver, it's unclear just how far west the strongest storms will develop. Most of the high resolution models keep best storm development east of Denver today, with high based storms for the most part in the city. We'll see. 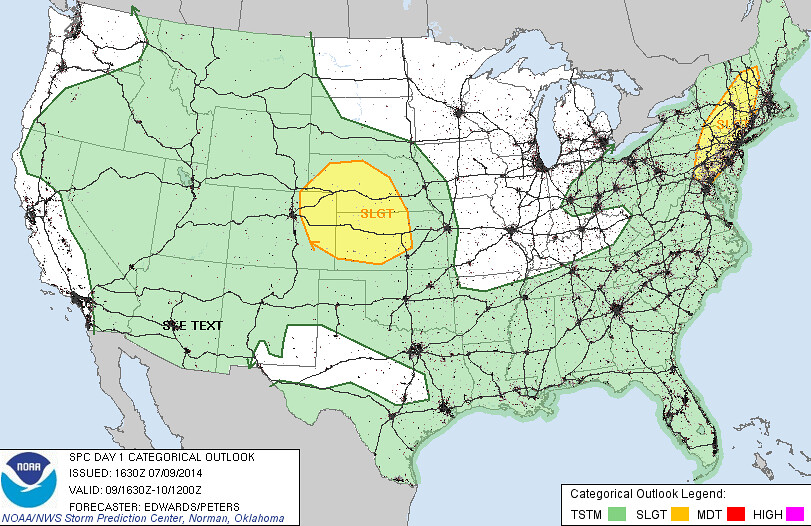 We bump up storm chances a bit Thursday, and keep them in the 30 - 40% range into next week for Denver and the Front Range. While these are good chances for afternoon storms, keep in mind this means there's also a good chance you don't see storms on any given day.

Precipitation Forecast
The Weather Prediction Center's seven day outlook is downright wet for Colorado. While possibly overdone for some locales, this gives a good sense of the active pattern we expect through the weekend and into next week statewide. 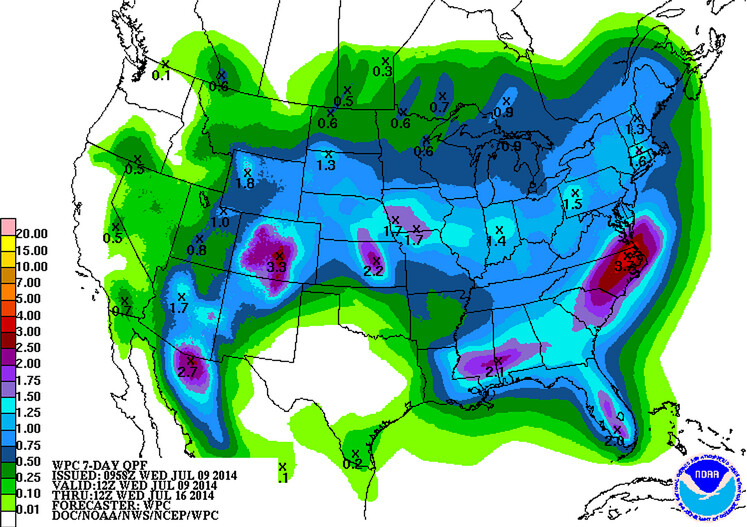 Both the EURO and GFS support pretty good totals as well, with the greatest potentials looking to be across south central Colorado and northeast Colorado. 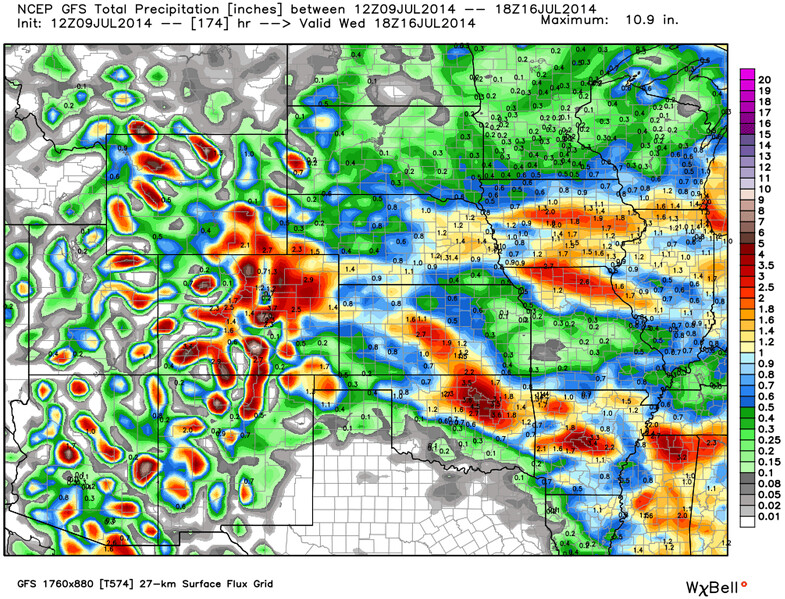 As is typical this time of year, storms start to slow down increasing threat of flash flooding. Please be wary this monsoon season, and pay close attention to flood watches, advisories, and warnings. There are currently no flood advisories out for the Front Range, but a Flash Flood Watch has been posted for <a href="http://forecast.weather.gov/wwamap/wwatxtget.php?cwa=gjt&wwa=flash%20flood%20watch'>southwest Colorado through Friday.

Temperatures
Temperatures will be up and down over the next week as well. After a brief break Tuesday from the heat it's back to the 90s to end the week. Afternoon highs over the next several days will greatly depend on where and when storms develop -- earlier cloud development will help keep temperatures down a few degrees.

Overall, we're expecting temperatures to average near normal for the period, with some days several degrees above, and others below. It is a ways out, but as it stands, it looks like our next best shot at well below normal temperatures could come next Tuesday and Wednesday, with a good chance for rain as well. 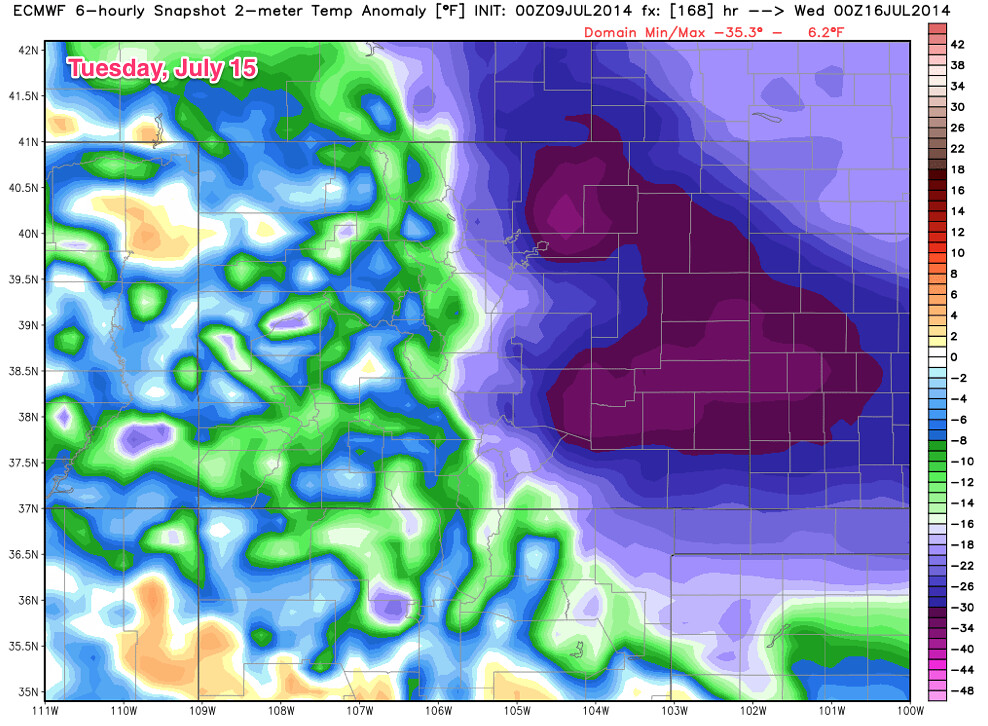 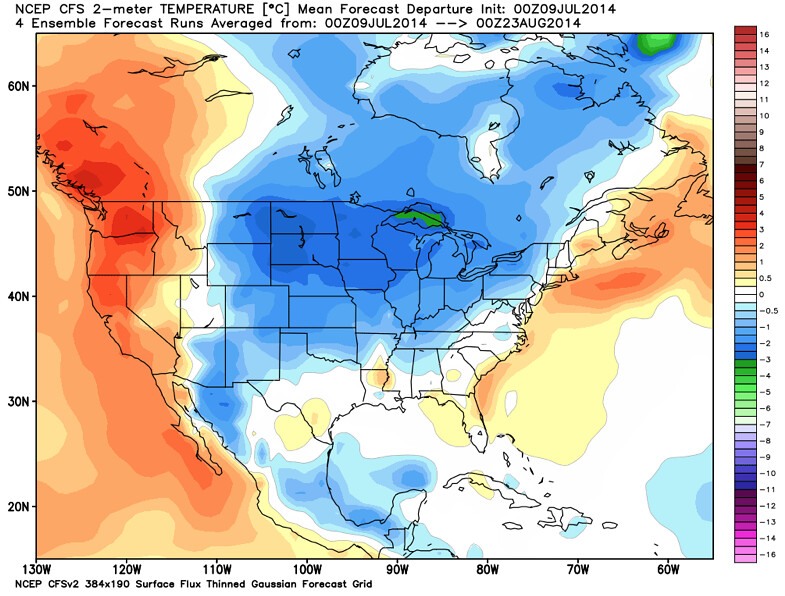 We'll keep updates coming as we narrow in on best storm chances through the next week. We'll also keep an eye on on any severe threats that develop, and post updates as necessary. For the most frequent updates, join us on Twitter (@weather5280), and if you haven't already, subscribe to weather5280 as well!