Drought recovery across southeast Colorado comes at a price. The parched earth struggles to handle the rapid heavy rainfall like we saw last night, leading to enhanced flooding threats and insult to injury to farmers and ranchers in the area.

Heavy rains brought dangerous flash flooding to much of Colorado Saturday, including some of the hardest hit drought areas of our state. The NWS Advanced Hydrologic Prediction Service’s precipitation analysis estimates that anywhere from a half inch to over three inches of rain fell over southeast Colorado yesterday afternoon and overnight. 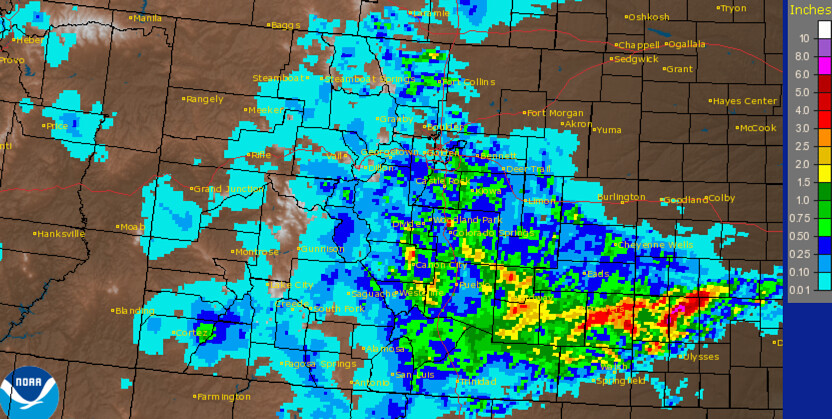 Then compare that to the most recent drought monitor…

The seven days prior were equally impressive for eastern Colorado (does not include yesterday’s storms). The drought relief continues. 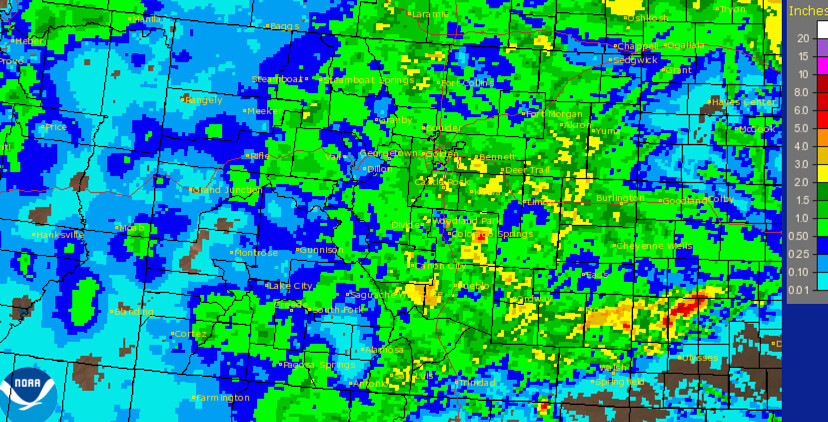 Flooding forced closures of highways across the area, including highway 50 into La Junta, Colorado, where underpasses became flooded and impassable. Here’s a capture of the flooding outside Rocky Ford Theater northwest of La Junta Saturday night.

More rain in forecast
We’re not out of the woods yet with regard to the flooding threat. More rain is in the forecast for the coming days. A Flash Flood Watch remains in effect through this evening for much of south central Colorado (mainly from Monument south to the stateline). Storm that do develop today across southern Colorado could produce more heavy rain and flash flooding.

Greatest risk areas will be burn scars along the Front Range foothills, and then east across high drought impact areas. That said, slow moving storms will be capable of small stream and urban flooding anywhere they park themselves over the coming days.

Here’s the GFS precipitation forecast through Wednesday for Colorado (left), and the WPC three day QPF outlook for the United States.

It is shaping up to be an interesting (and chilly?) next few days across eastern Colorado. We’ll discuss the cooldown for some and our next severe weather threat in a different post. Stay tuned!