The cooler air we’ve been promising for some time now has arrived, and will continue to bring temperatures well below seasonal norms through the end of the week. Wednesday looks to be the coolest day of the week with highs in the low to mid 70s for Denver, and likely a few locations in the 60s across the Plains. (Some spots could see near record-cool highs for the date.)

The focus over the coming days will not be the temperatures, however, as the threat for flooding rain will be our primary concern through midweek and beyond. Models have fluctuated in where the heaviest rainfall totals will occur through Wednesday, but there will be a few regions we will be watching very closely, and most of the state should at least see some rain.

General setup
The setup for the coming days is not atypical for this time of year in that we’ll have ample moisture to work with through the middle of this week, and quite possibly continuing off and on well into next week. Take a look at this water vapor animation of the last 24 hours across the United States. Notice the stream of “moist” air flowing into the southwest and into Colorado. Late in the frame you can see dark colors over southeast Colorado, these were the storms that brought flooding to this part of the state last night.

We’re expecting the water vapor loop to look very similar over the coming days. You’ll also notice the large trough digging into the upper midwest. This is responsible for the cooler-than-average temperatures being ushered into the middle of the country.

The combination of this moisture stream and a stalled front over the coming days will mean a heightened flood threat for the region. The greatest threat for heavy rain across Denver, northeast Colorado and the higher terrain west of I-25 appears to be Tuesday afternoon through Wednesday when PW values are highest. That said, ingredients are in place again today (similar to yesterday) to support some strong, slow-moving storms this afternoon -- so that’ll need to be closely watched. The greatest threat for storms today will be west of I-25 and through the Colorado high country.

Flash Flood Watch
At this time there are no flash flood watches issues for northeast Colorado and the northern Front Range. This could very well change in the coming hours, as again, Tuesday and Wednesday look potentially very wet.

A flash flood watch is in effect for most of southern Colorado, however, and will likely remain so through much of the next several days. The current watch goes through midnight tonight, and includes all of the southern I-25 corridor, including the high flood risk burn scar areas like Waldo Canyon.

There’s been a lot of buzz over recent days with how this setup compares to last year’s September floods. While we’re watching the flood threat very closely, it seems irresponsible to make that connection at this point. Remember, this is the time of year where it’s typical to get flooding and flash flooding in Colorado, and the atmospheric setup is not exactly the same.

Unlike during the early summer weeks, storms in late July and August are moving much slower -- which increases the flood threat. Rather than focusing on how this does and does not compare to late last summer, let’s use that as a reminder of the threat flash flooding does pose to our region, especially at higher terrain west of I-25 and over burn scar areas. Please heed all watches and warnings over the coming days.

The NAM/EURO/GFS differ on who gets the heaviest rain over the coming days, but all broad-brush most of the eastern mountains, I-25 urban corridor, and into the eastern plains with 0.5 to 3 inches of rain, with locally higher amounts. Where storms stall, or train, we could see certainly see higher totals. Today’s 12z suite of both the GFS and NAM appear to try and pull the heaviest precipitation further north than previous runs. We’ll see. 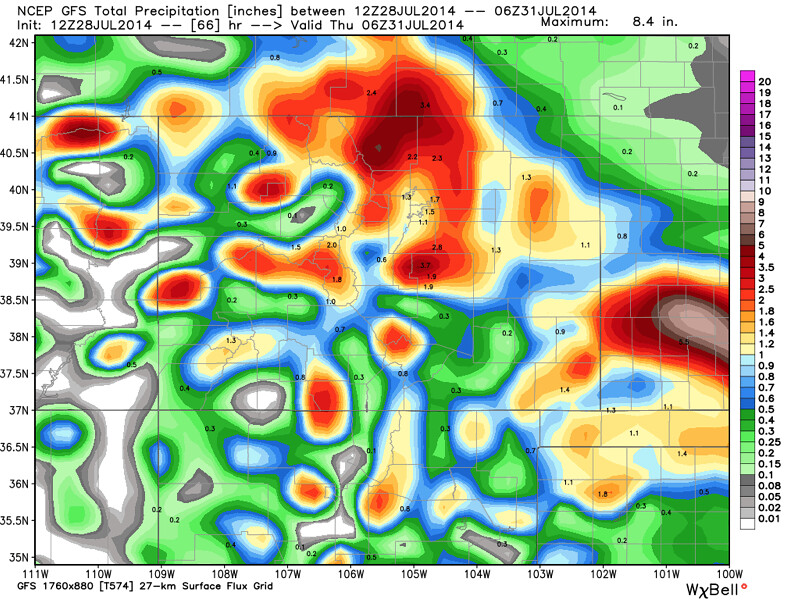 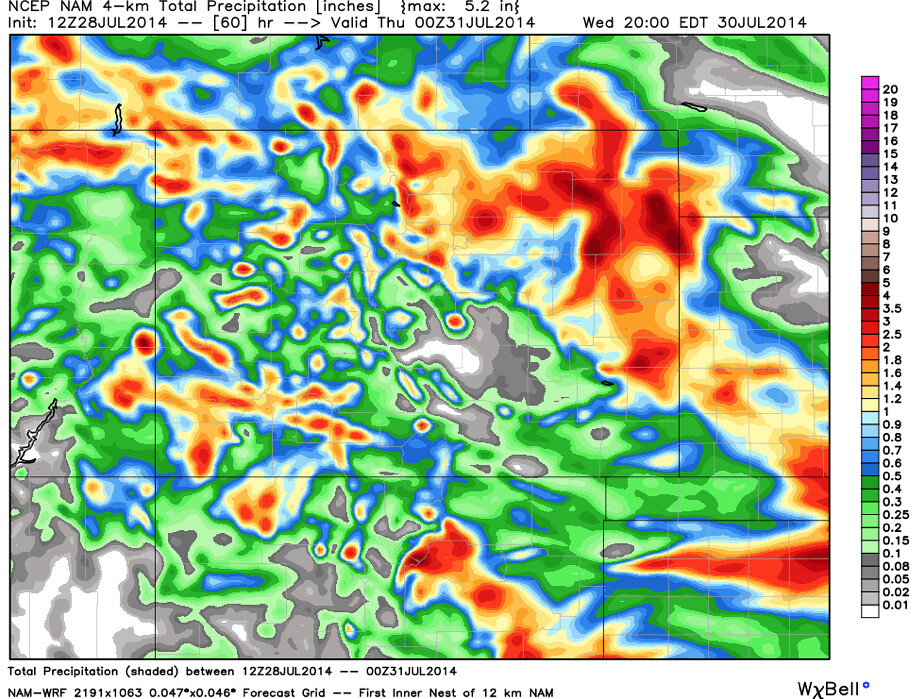 We’ll keep on top of everything and offer updates as needed. Again, greatest storm chances today will likely be over higher terrain to the west, but could see a few storms push east through the afternoon and evening hours. A greater threat for heavy rainfall begins Tuesday afternoon, and will likely continue well into Wednesday, if not through the day Wednesday.

To stay ahead of the storm, subscribe to Weather5280. Also find us on Twitter (@weather5280) where we’ll have our most frequent updates over the coming days.

Heavy rain reached northeast Colorado early this afternoon, and has really grown in intensity over the last hour. It…