Warmer week ahead and storm chances
Temperatures this week will run very close to normal for this time of the year following last week’s fall-like temperatures. Highs are forecast to be in the upper 80s and low 90s Monday through Friday, varying day to day largely based on any storm chances and afternoon clouds that form.

Monday’s highs will be in the mid to upper 80s for the Denver area before a better chance for storms develops by afternoon across northeast Colorado. Best chances for storms could remain just northeast of Denver, but we’ll go ahead and bump up chances to ~30% for Monday even in the city. Both the NAM and GFS have PWAT values over an inch for Monday afternoon, especially just north/northeast of downtown Denver. Storms that do develop ahead of the approaching shortwave will be capable of heavy rain, wind, and possible even some hail mixed in.

Storm chances stick around Tuesday, with a very similar setup in place as Monday. Temperatures should be a bit cooler as well with more cloud cover in place. Wednesday and Thursday look drier, with highs around 90. It makes little sense to rule out a stray storm on any day of the coming week, but at this moment Monday and Tuesday look like the best chances at anything organized, and then again possibly Friday.

August
Beginning August 2nd the average daily maximum temperature starts to decline in Denver, and will continue to do so through the end of the year. Last week we saw average daily highs peak at 90 degrees F, by September 1st that number will have dropped to 83 degrees. 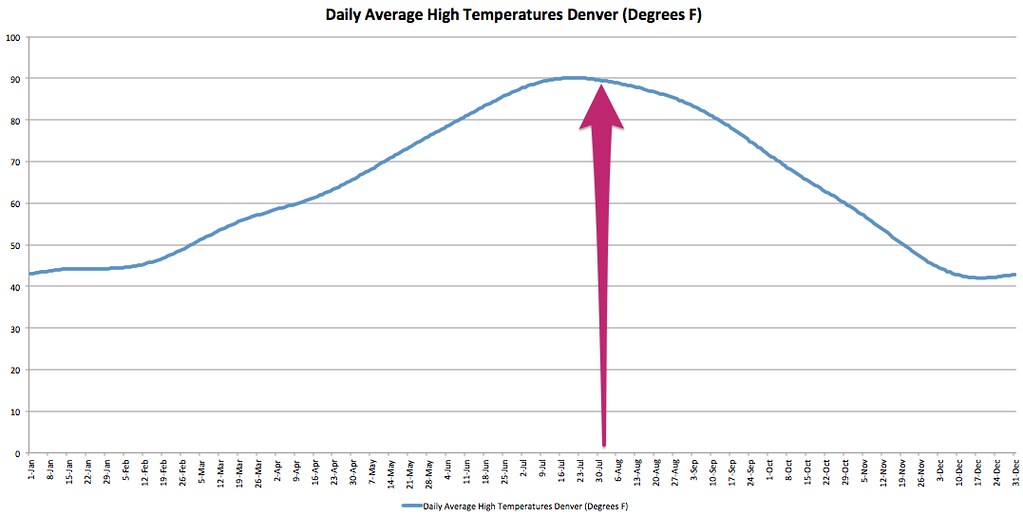 We continue to expect this August to hold much of the same we’ve seen this summer for the state. Temperatures near normal, with at or above normal precipitation for the month. Despite two very memorable cool shots this past July, the month ended almost exactly normal temperature-wise at just 0.3 degrees above normal. Our top analog year (2009) was slightly below normal for precipitation in August with just 1.14 inches recorded at Denver International Airport. We continue to think the current pattern favors this August to be bit wetter than that, however.

Here’s a look at the CFSv2 2-meter temperatures (Celsius) through the end of the month. A continued monsoonal flow should help keep temperatures over the intermountain west in check over the coming weeks. On average, Denver sees 11.5 days with temperatures 90 degrees or above during the month of August. 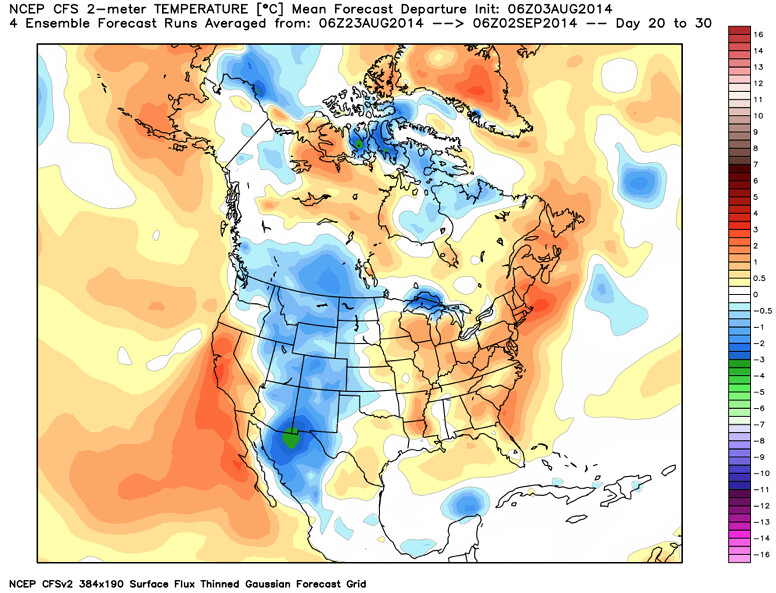 Just a brief update today as we head into the first full week of the month. We’ll keep a close eye on storm chances over the coming days, and pass along updates as needed. Overall not a terrible looking week ahead, with temperatures very comfortable for this time of year, and a few chances for storms.

As far as first weeks of August go, this one was just about as nice as it gets. Afternoon…

Wednesday was one of those days in Colorado that nearly all conversations started with “it feels like Seattle, not…