Thursday marked the 10th consecutive day of above-normal temperatures across central Colorado, and many folks may be wondering when this heat will abate. Well, eyes are now on a noticeable pattern change that will take place over the next week -- though it won’t exactly happen overnight. Indeed, before we eventually see much cooler temperatures, we need to get through the ‘infancy’ of the upcoming pattern change (Sunday night and Monday), when severe storms may occur over eastern Colorado. We will have more on this possible threat in coming days.

As for the much cooler temperatures we expect will try build into the area by the second half of next week, the operational runs of the computer models are still somewhat split on solutions. However, the model that nailed the chilly air mass of 3 weeks ago (Canadian GEM) is advertising much cooler air, and possibly at least some mountain snow, by late next week. Have a look temperature forecast from its operational run for next Thursday at 6pm: 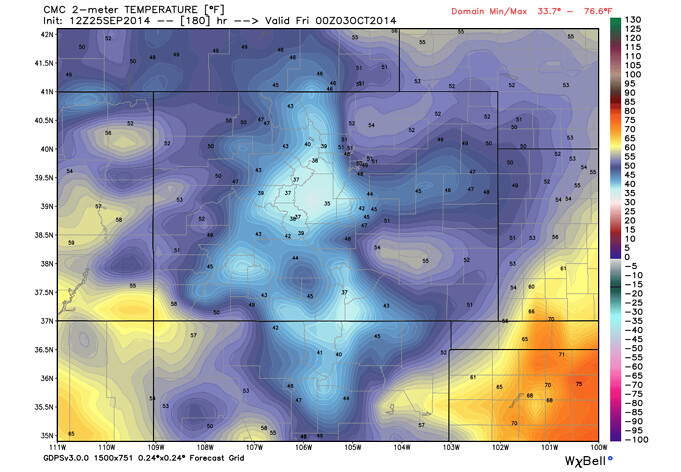 While this type of airmass isn’t unprecedented for this time of year, it is certainly a change from what we’ve been having. Plus, look at the ensemble mean temperature output for September 30th through October 5th: 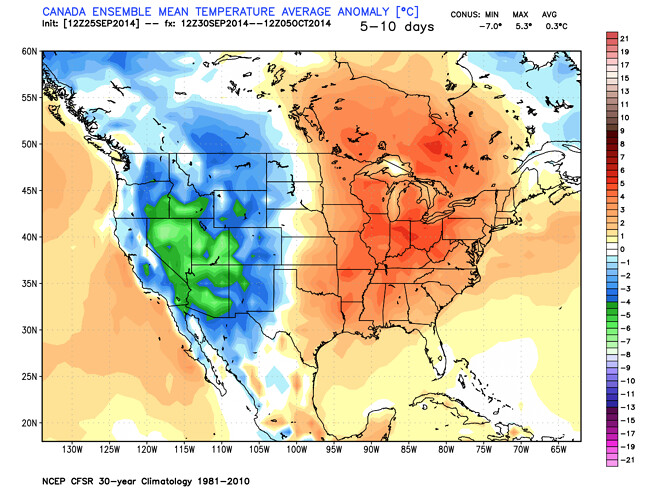 Most of that blue shading in Colorado would come from that storm system later next week. You can see it is clearly showing a cooling trend for an area that has been very warm as of late. It is also interesting to note the the ECMWF ensembles have been noticeably cooler than the operation run, and the GFS is trying to come in line with this thinking too. Bottom-line, the signs are there for change to much cooler weather ahead...

What about snow? Well, it is far too early to speculate about that, but if the main energy comes through on the right track and we can get cool enough (as the Canadian GEM suggests), then we could be looking at something like this: 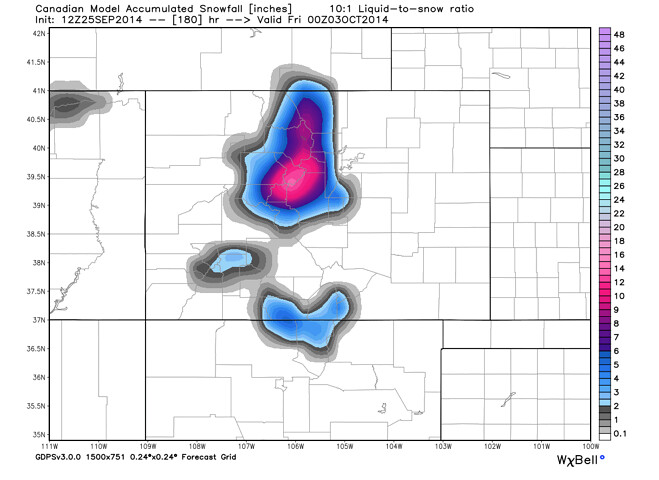 The above map is total projected snowfall from the storm system later next week, courtesy of the Canadian GEM model. Granted, most of the snow would favor the mountains. However, some light snow or flurries could impact parts of the Palmer Divide...if we cool enough. Also, keep in mind that this is still a full week away, and models may shift back and forth between now and then.

We’ll take a closer look at any severe weather threat Sunday and Monday’s system holds later this weekend, and offer an update on what we’re watching for late next week in the State of the Atmosphere. Just a heads up that the pattern...no doubt it’s a changin’!

The ABC’s of NWP

Numerical Weather Prediction or NWP, a popular abbreviation in the weather community, is a mathematical way to solve for…