Well, we've certainly gotten off to an active start weather-wise for the first few days of 2015! What with the active last 7-10 days of December, we've had busy few weeks of weather across the Front Range.

With this post I'd like to do a little wrap-up regarding the weather we've experienced over the past few weeks, as well as December as a whole, and also update you on how things look in terms of weather impacts for Denver for this coming week and the following one.

A look back at December
Though it may now feel like a while ago -- heck, it was last year -- recall that the first two-thirds of December in Denver was primarily much warmer and drier than normal. In fact, we didn’t have any measurable precipitation until nearly halfway through the month, December 14, and what we did receive that day fell in the form of rain as opposed to snow. However, in multiple Weather5280 posts we had been urging snow and cold-lovers not to lose faith as we believed the end of December and early January showed promise for a colder, snowier pattern developing.

That pattern change did flip, as promised, towards the end of the month (around December 22), when we saw December’s first measurable snow -- about 1” at Denver International Airport (DIA). The rest of the month was much colder and snowier than normal. In fact, that last week of the month of December averaged a whopping 16℉ colder than normal, with a sizeable 11” of snow falling during this period at DIA.

January off to a cold, white start
The weather for these first four days of 2015 has picked up where we left off at the end of December; that is, we’ve been both colder and snowier than usual. In fact, we had accumulating snow during the first day of the year. If that’s not an auspicious sign for snow-lovers, I don’t know what is. Upslope flow developing behind an Arctic front dropped 1.8” of snow officially at DIA. However, this system was a bit of an over-achiever, especially for the eastern suburbs of Denver. Some folks picked up to around 5” from this event.

Another Arctic front swept across Colorado on Saturday, and, like the Thursday event, upslope flow developed behind its passage. DIA officially picked up 1.6” of snow, but, again, some locations did better -- particularly those east and north of Denver. This was another fairly widespread 2-4” event for many. In the past two weeks, then, DIA has picked up 15.4” of snow, which is much above normal for this period -- and an average of more than 1” of snow a day. 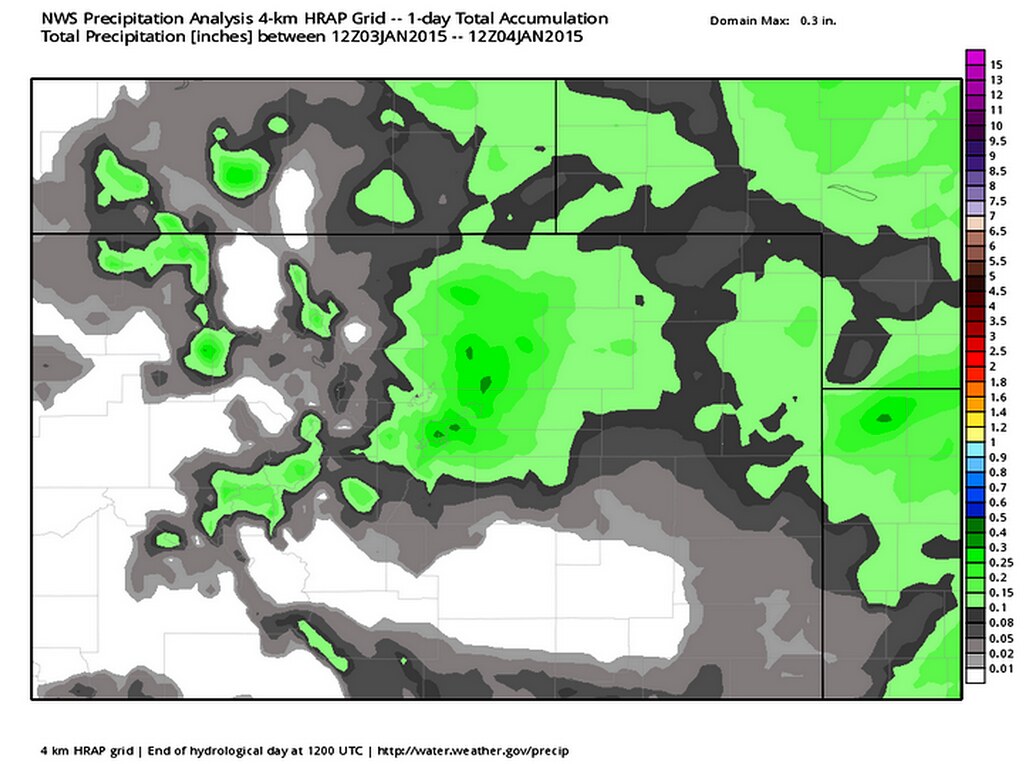 So, we’ve established that cold and snowy conditions have prevailed for the last week of December plus the opening days of January 2015, but is this pattern set to continue? Read on for more...

The week ahead
Suffice to say that the week ahead will be far less active in terms of weather than the past two weeks for Denver. That is because an upcoming plunge of cold air will only give northeast Colorado a glancing, and very transient blow; its wrath, so to speak, will instead be focused on bringing near-record to record cold for some areas of the Midwest, Great Lakes and Northeast by the latter half of this coming week.

At press time, DIA had only made it up to 20℉ for high on Sunday as we spent the day stuck under an inversion. Expect a major rebound in temperatures for Monday, however, as abundant sunshine boosts highs well into the mid-40s, and perhaps to near 50℉ in spots. In fact, I wouldn’t be shocked if a few, typically warmer, locations make in into the low 50s -- which will feel downright balmy compared to temperatures over the past few days. We stay relatively mild Monday night, with lows dropping to the upper 20s in most spots.

Tuesday will be similar to Monday, with plenty of sunshine and highs primarily in the 40s to near 50. Clouds may increase during the second half of the day ahead of an approaching cold front. In fact, a few snow showers associated with this cold front cannot be ruled out for Tuesday evening into Wednesday morning, but I think most spots remain dry. Colder air will drop lows to the mid-to-upper teens by Wednesday morning.

Wednesday will feature varying amounts of clouds and sun -- more of the former in the morning; more of the latter in the afternoon -- with a slight chance of an early snow shower. It will also not be nearly as warm as Monday or Tuesday, with highs probably struggling to eclipse the freezing mark. However, the core of the coldest air will remain well to the north and east of Colorado. 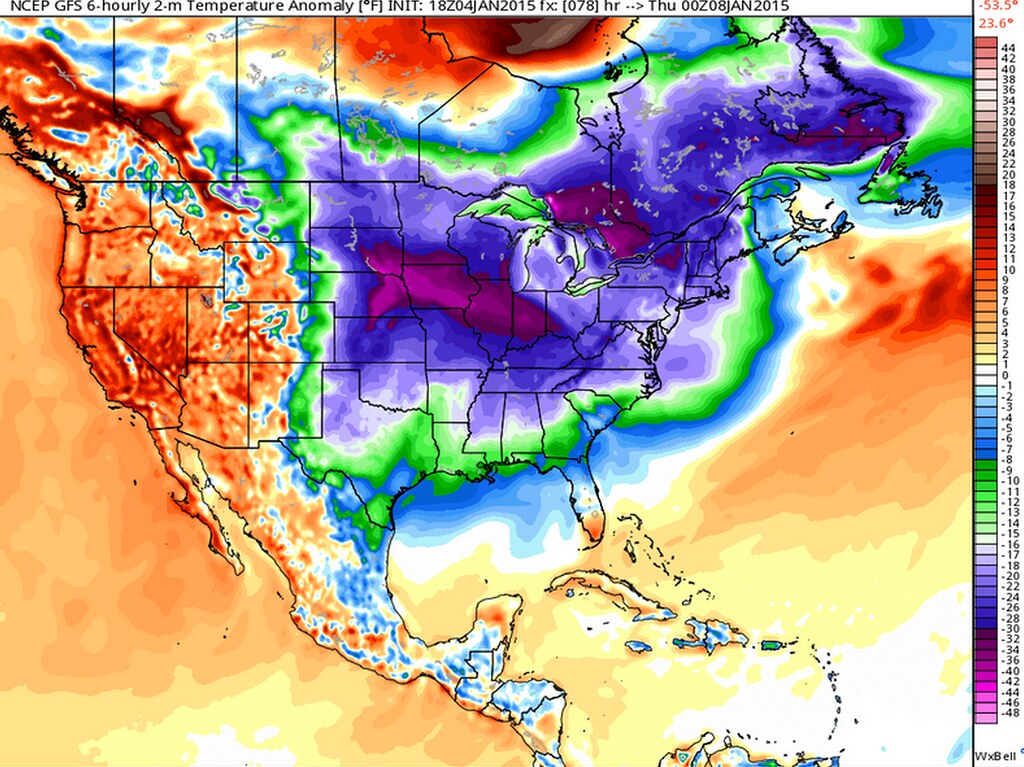 Thursday may be the mildest day of the week, though it will start off on the cold side -- with morning temps probably in the low 20s. Plenty of sunshine during the day, however, will likely boost highs to 50℉ or above; in fact, some models even push us into the mid-50s.

The outlook for Friday into the weekend is for predominantly sunny days and fairly clear nights -- as weakening high pressure to our west builds in -- with temperatures much closer to seasonal norms: that probably means highs in the 35-40℉ range, with lows primarily in the teens. We will keep our eyes on a possible weak trough which may try to push through on Saturday, but at the moment little or no moisture appears to be at play with this system.

What about further out?
The outlook for next week, at the moment at least, is for fairly benign weather for our neck of the woods, with temperatures probably staying near- or somewhat above-normal, with lower than normal chances for precipitation and/or snow. Indeed, the Climate Prediction Center’s 8-14 day outlook calls for higher than normal chances for above normal temperatures during this period. 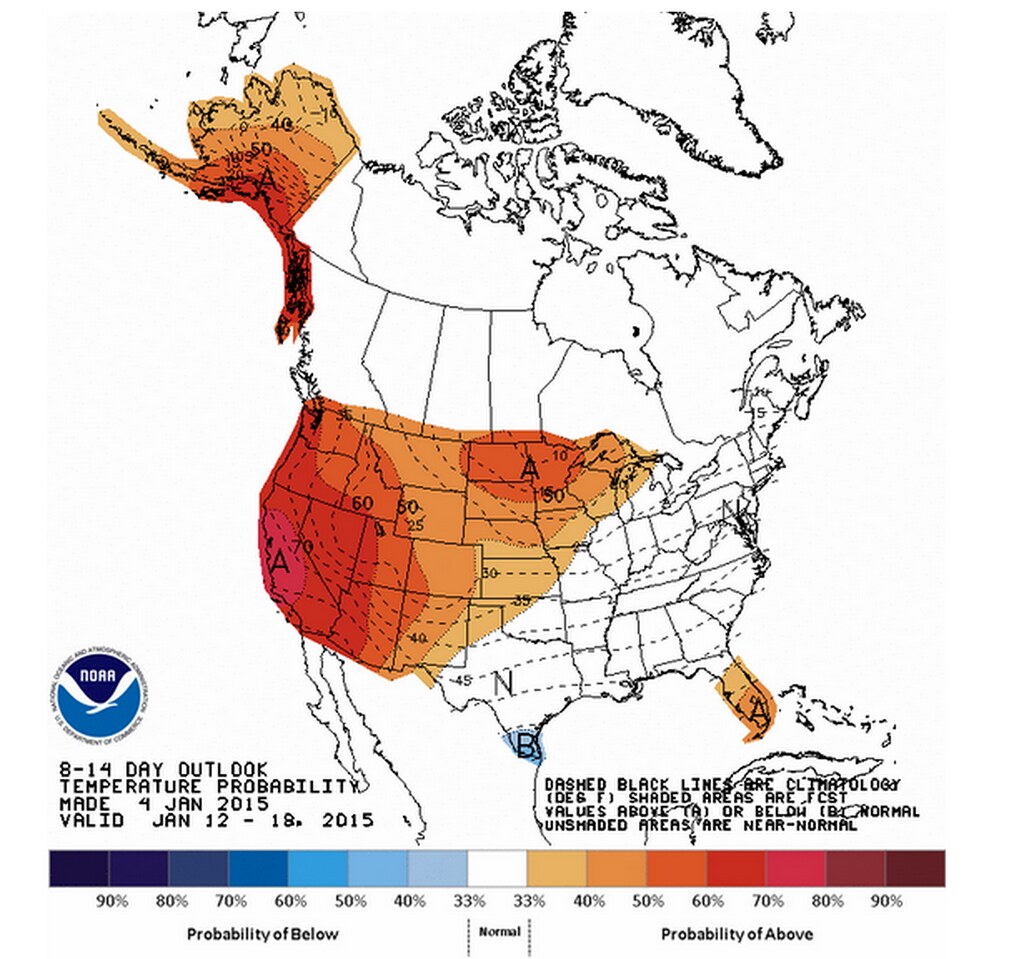 So when might snow and notably colder temperatures return for our neck of the woods? I’m sure we’ll tackle that in an upcoming post this week on Weather5280. Until then, enjoy a period of relatively uneventful mid-winter weather for the greater Denver metro area.

Chinook Winds Eating the Snow Away

Chinook winds are just another incredible weather phenomenon many of us are familiar with living along the Front Range.…