Lots to cover here, so I am going to jump right in. The persistent pattern that has kept winter at bay for most of us, is still persisting in the form of a warm and mainly dry ridge over the Western US and cold/wet/snowy trough over the Eastern US. This is generally the pattern that has prevailed since fall of 2013 and is easy to spot today: 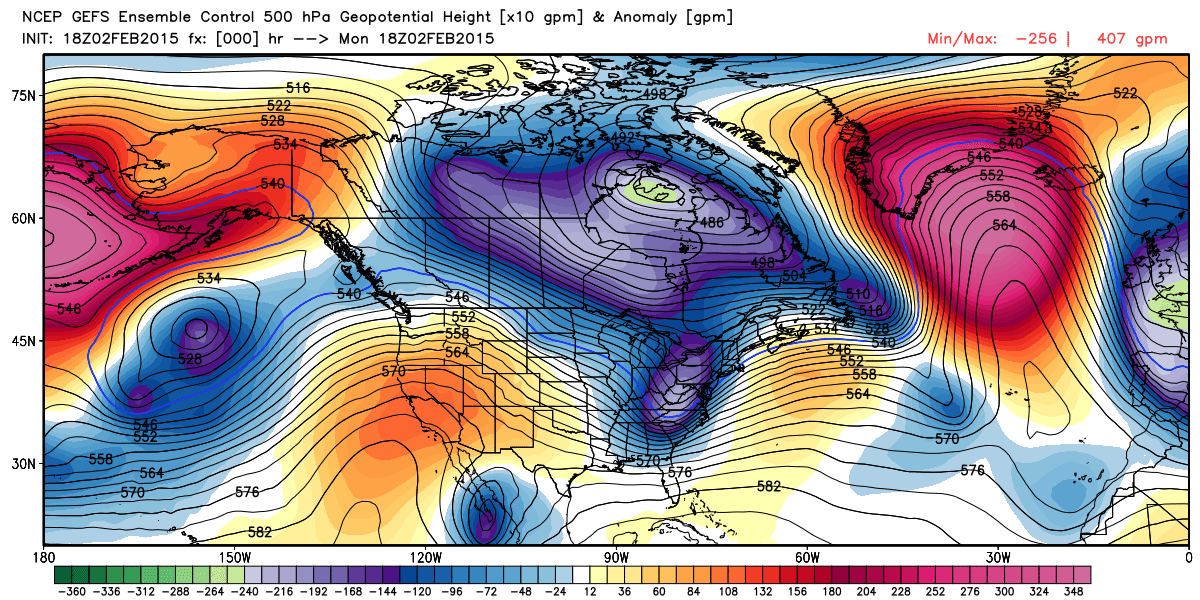 You can clearly see the western ridge and the eastern trough that was initialized on the 18z GFS 500mb Ensembles today... That ridge was responsible for giving California one of the driest January's on record. Extreme northern and portions of southern California received some moisture, but much of the state was VERY dry. You can see the moisture totals for the past 30 days here: 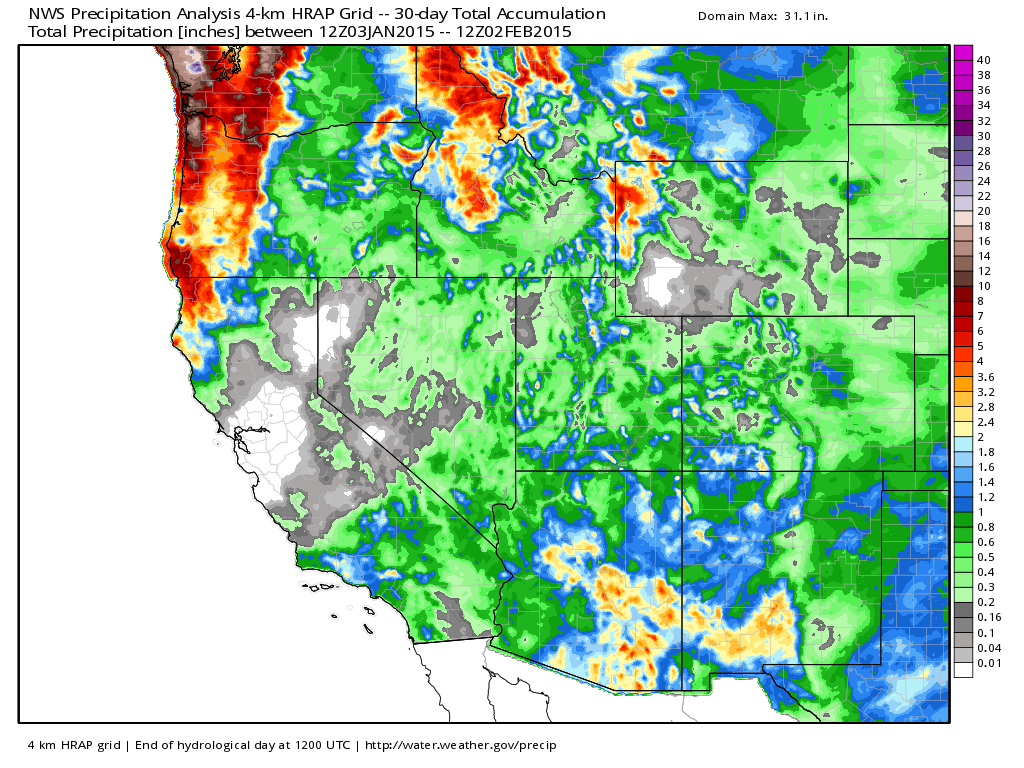 While this pattern kept big storms largely out of California, it greatly benefited Arizona, New Mexico, Western Texas, and parts of Southern Colorado. In fact, Colorado Springs recorded the 4th wettest and 4th snowiest January on record with 13.5" of snow and 0.87" of liquid. Pretty impressive stats for a month that is usually one of the drier months on the calendar... Denver officially finished with 7.2" of snow (~110% of normal) and 0.38" of liquid.

Back to California... The pattern that is set to unfold for California is more reminiscent of the December pattern which clobbered the state. From the GFS, this is the total expected precipitation and total expected snow for the next 10 days: 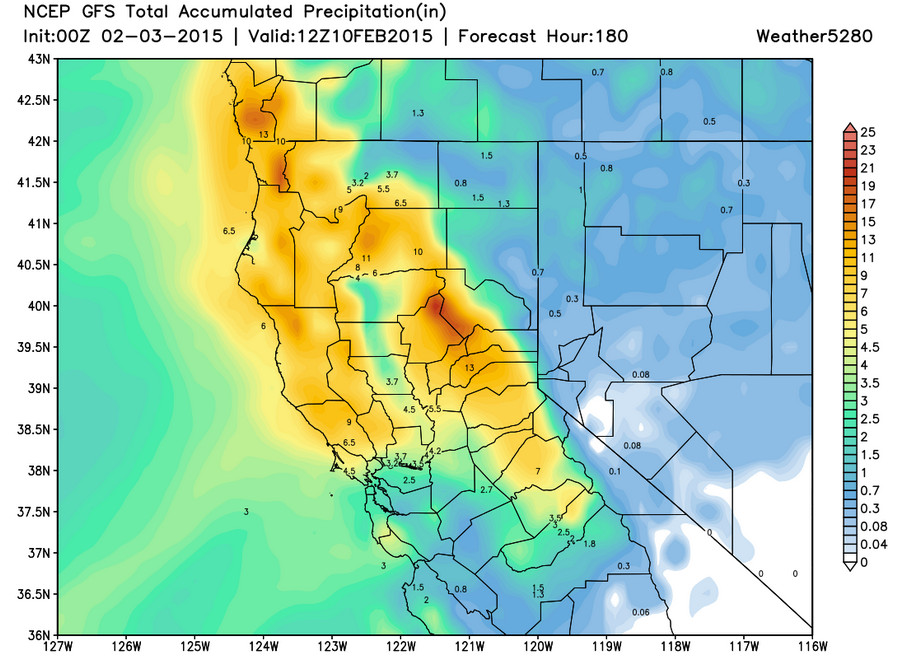 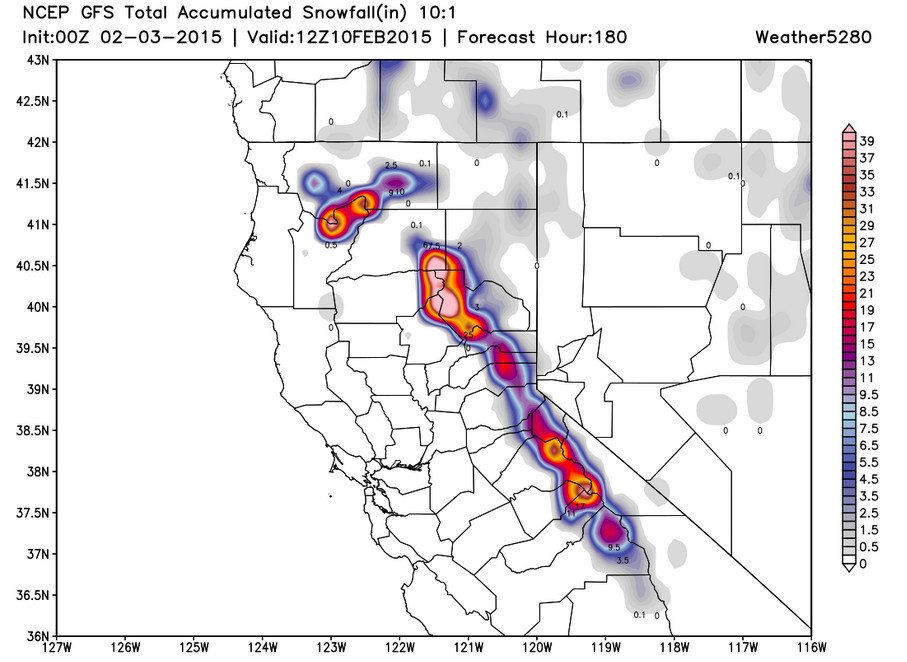 Other models are in good agreement with this scenario too, making it a pretty high confidence forecast. This will go a long way in helping with the drought that continues to plague the state. Which leads me to my next thought...

Many forecasters will tell you that this year has behaved in a very similar way to last year. In many cases it has looked very similar, but last year didn't offer nearly as much moisture for California to this date. Plus, southern Colorado and neighboring areas were parched compared to what has occurred more recently. So, things are different...the western ridge isn't quite as persistent as last year, and we have a southern branch of the jet stream which has been quite active. These two facts alone continue to keep me bullish on spring moisture for Colorado and the entire region. After looking at the ECMWF Weeklies today, which take us into early March, I was more than encouraged. While we have "a whole lotta western ridge" to get through the first half of this month, the model showed the pattern breaking down late this month into March. This would be right on schedule with what we've been advertising for months...A LATE SHOW.

While the jury is still out on just how cold or not cold we will be this spring, the LATEST JAMSTEC model continues to keep the whole country (including Colorado) colder than normal for March, April, and May:

It also keeps a large part of the country (including Colorado) wetter than normal for the same time frame:

How has the JAMSTEC been performing? Well see for yourself...the graphics below show what it had in the forecast from the November run for December through February:

I would say it has been doing just fine: cold south and east, warm north and west. The above normal moisture for California was obviously front loaded in December. The dry January will be offset with what looks to be a very wet start to February. It even hit (slight dry signal) on what was a very lackluster December and January for the Central Plains and Midwest. It put Colorado in the red (warmer than normal) and the white (normal precipitation). However, it had wetter than normal conditions just to our south which has panned out beautifully.

The fact that the JAMSTEC has been performing quite well, makes me have a high confidence level in this model. Plus, it has been saying for months that we were going to have a cold and wet spring. Given the fact that the PDO remains positive, we will likely continue to have some sort of weak El Nino influence (despite it being far from traditional), and we have been getting moisture at a usually dry time, makes me think March, April, and May will prove fruitful.