The first eight days of March have been cold ones across Colorado and much of the United States. Some of the coldest U.S. temperature anomalies have been across eastern Colorado, with many locations averaging from 5 to 10 °C below normal month to date. 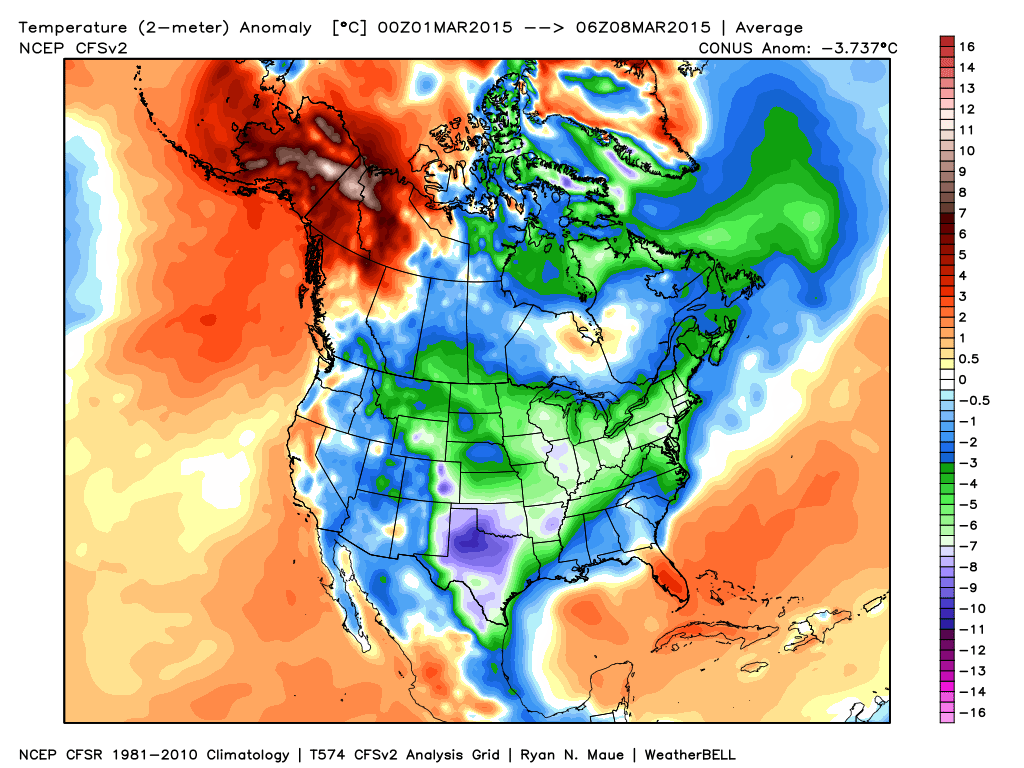 The coming week will be quite a bit different with high pressure bringing warmer and drier weather to the west, and eventually pushing east as well. Here's the forecast anomalies (°C) for the next 5 days from the GEFS, warmth overwhelming the pattern for now. 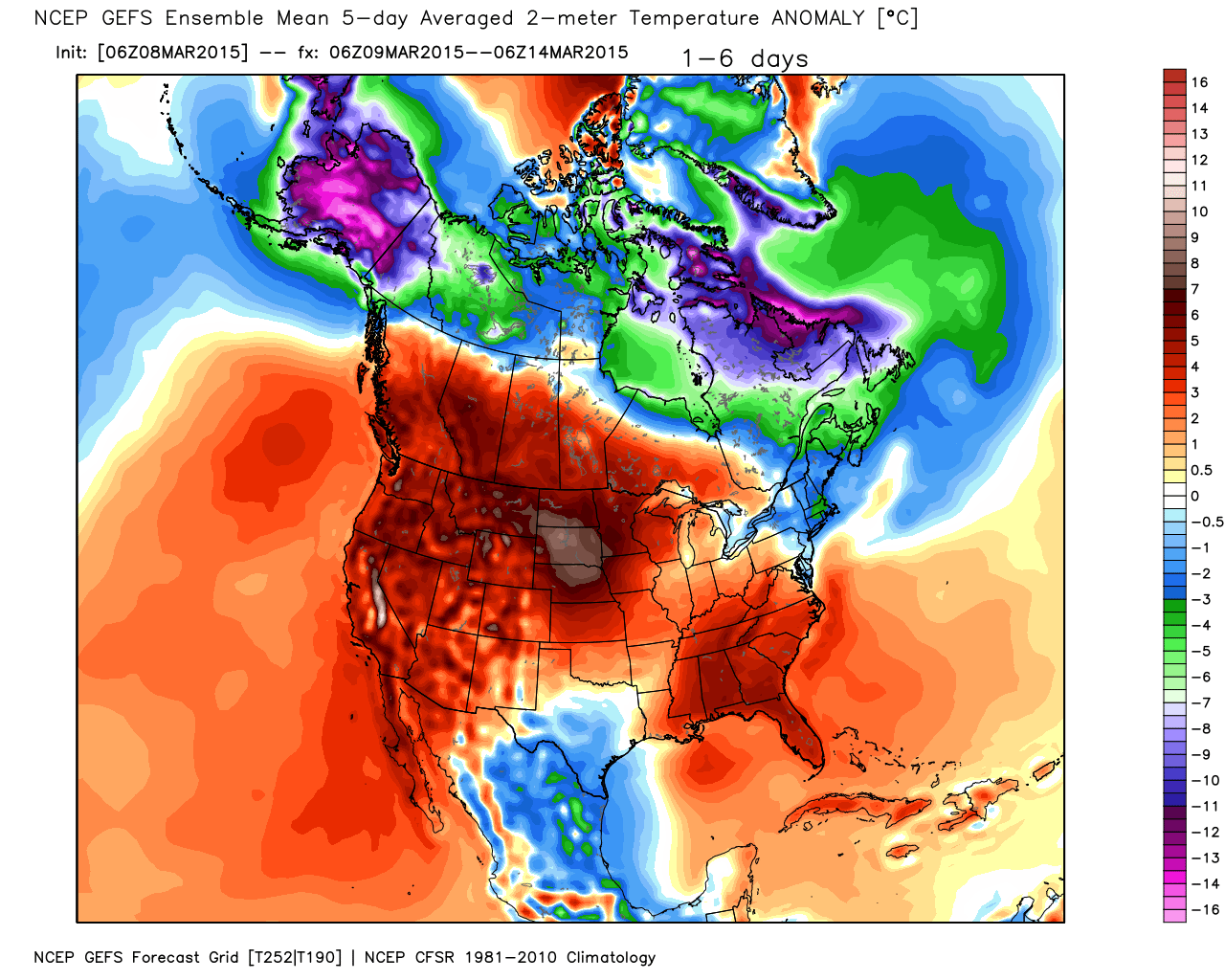 The big question now becomes, how long does this warmth hold? As Brian discussed last week, we do expect colder weather to return, but timing remains the question.

Much like our last shift to cold (ending now), look for the east/northeast to start cooling first, before the cold eventually works west again for the second to latter half of March.

Week One
Until we see this shift, expect generally quieter, warmer weather to prevail across the west and central U.S. The next system we'll need to watch for Colorado will come at the end of this week – but some big questions here.

The Canadian has been most bullish, but given the model's wet/cold bias this time of year, not too much weight being put here. The GFS/EURO also have a wave of energy pushing across the state Thur/Fri with the main energy breaking off and digging south into southern New Mexico. For now, looks like at least a chance for some mountain snow, and may some rain/snow at lower elevations, though those chances are low at this time.

Week Two
The following week I'd like to leave ourselves with a bit more wiggle room as this starts to get closer to the timeframe of when we'll look for our pattern shift once more.

Operational models are tending to continue the anomalous warmth into week two, with the GFS producing highs near 70 on the 17th... The GFS is also pretty fixed on producing a day 10 storm for Colorado (what's new), though on today's 12z run, that'd be rain for Denver. Again, the details are less important here.

What we do see starting to happen in the medium range models is a tendency toward a more active/colder pattern by the 17th to 22nd timeframe. Both the GFS and EURO have the AO/NAO and EPO going negative around this time, which is generally a cold pattern for the central/eastern U.S. This is reflected in their ensembles as well. Here's a look at today's 00z GFS 850 mean temperature anomaly forecast for March 20th, notice the warmth over Alaska, and a colder eastern 2/3 of the lower 48. 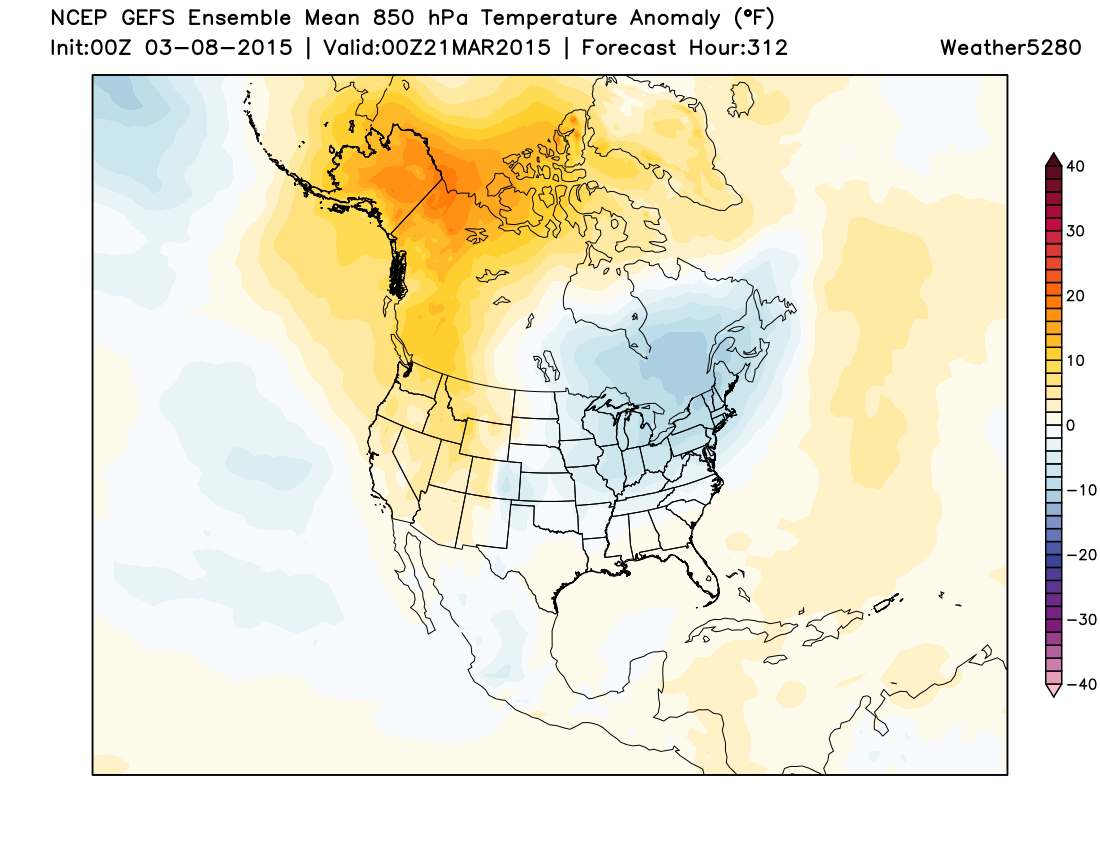 There are, simply put, too many disagreements here though to get too fixed on an specifics. The GEM ensemble for the same period as the GFS above is very cold across the central U.S. and back into Colorado, while the EURO ensemble means keep the ridging quite a bit further east (Colorado warmer) through the 23rd (end of run).

This tug of war between the models is expected. Not only given the time of year and pattern, but again we're talking about 10(+) days out. For the coming week the task will be watching how thing progress, and working on getting a better handle for timing/changes we can expect in the longer term.