In yesterday's State of the Atmosphere I made a comment about how horrible the global models have been recently. Last night, the GFS took the cake, producing one of the greatest forecast flips any of us ever remember seeing.

Its 00z run produced what would be a record-setting snowfall for Denver later this week with >50" of snow for the southeast suburbs assuming 10:1 ratios. Six hours later the same model cut totals by nearly 100% to ~0.5" at DIA. By 18z today it was all but dry for the entire eastern part of the state. Did we believe 50"? No, nor do we necessarily buy its 0.5" solution – the point is, what a mess.

While the GFS is the biggest mess, no doubt, other models are struggling as well. In yesterday's update we discussed how the GEM wasn't really biting and that we were ignoring it for the the time being. Today it's one of the wetter models for northern Colorado.

The EURO has been a bit more stable but varies in which part of the state it favors. Currently it's favoring southern Colorado (generally south of the Palmer Ridge), cutting Denver's QPF forecast by nearly 75% since last night's run. The difference being between it and the GFS, is that overall these are smaller shifts, not just WET / DRY for all of eastern Colorado. The EURO still slams a good portion of the state.

Track and speed remain keys
We'll continue to ignore possible snowfall accumulation details for the time being outside of noting that a significant snow is certainly on the table somewhere across the Front Range and eastern Colorado.

The big difference between the models and their run-to-run inconsistencies revolve around how they are handling the upper level feature we discussed yesterday. Both track and speed will be key in a) who gets heavy precip/snow, and b) how much and how prolonged the event is.

We expect better agreement to emerge tonight as our main feature comes onshore in the northwest US. Until then there's a lot of different scenarios still on the plate.

Take a look at last night's 'epic' GFS 00z run at 500mb (top) compared to its 12z run this morning (below). Notice the nicely circular, textbook cutoff at 00z gets strung out by 12z, with some energy dropping very far south, and another closed low trying to develop to the east of Colorado. 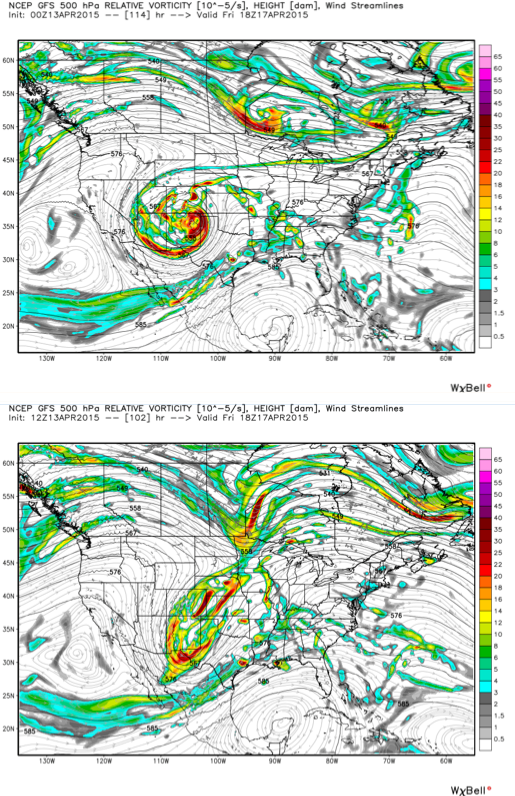 So while the 06/12z GFS completely lost our storm, and the 18z NAM is DRY into Friday, and the EURO seems to be favoring a more southerly solution... there are still some models showing a more significant look for northeast Colorado.

The operational Canadian model for example looks much more like the 00z GFS did, and after being one of the driest models on Sunday is now one of the wetter models for northern Colorado. 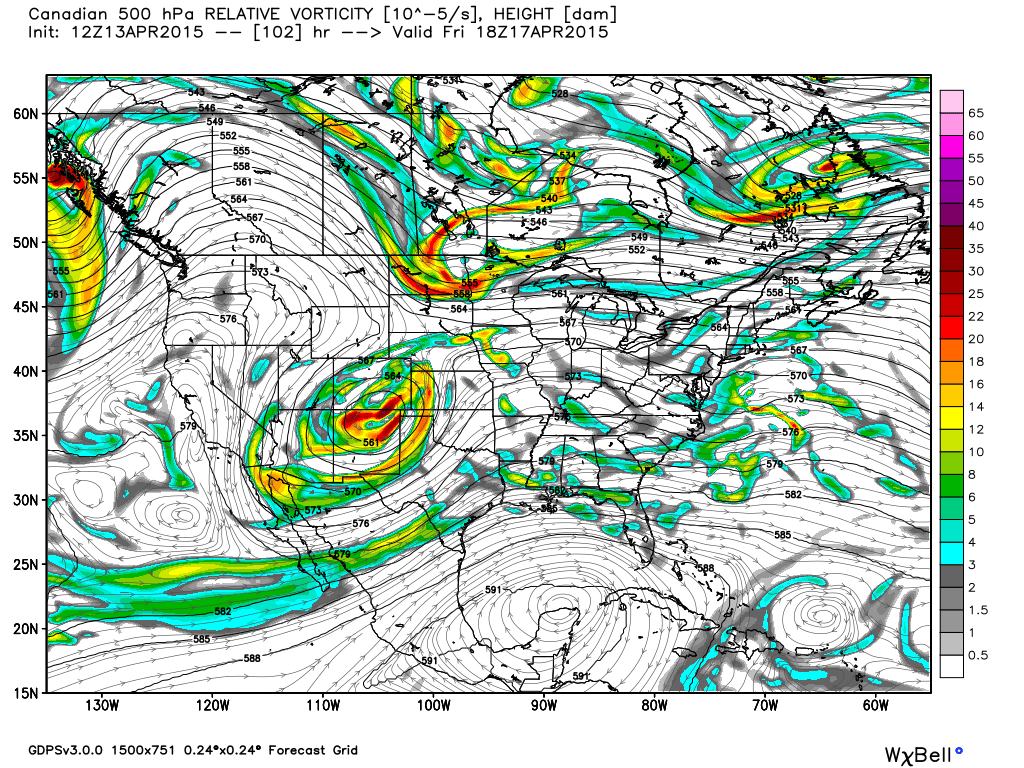 Assuming for a moment the recent GFS runs are wrong, and we do get a strong closed low to move through the Four Corners region Thursday – the next question is what happens next. Some models try and take the upper level feature south at this point, while others slowly progress the low east along the Colorado / New Mexico line. The latter would mean we see rain and snow continue into the weekend, with greater probabilities of seeing a significant event for much of eastern Colorado.

Keeping score
For now it makes little sense to model hug too closely since as you can see they-have-no-clue. While we sit back and anxiously await tonight's runs... here's more or less where we stand ("in short"):

Clearly there's a lot still to be resolved. As mentioned above, we're hoping for better consistency and should be able to start to narrow in on some solutions after tonight's model runs as our UL low comes onshore. For what it's worth, there's been more stability around each model's ensemble runs, which should suggest we may see solutions converge somewhat tonight as well.

We'll plan to have another update out tomorrow but probably hold off on doing one tonight and just let things sit for a bit. If you don't already, definitely follow us on Twitter where we'll likely be posting some updates this evening. Tomorrow we'll get things all squared away and just what kind of end to the week we're going to have.

If the week ends sunny and dry I'll be glad we didn't jump on the record-snow bandwagon I saw around town last night, as fun as it looked.