Wrapping up a wild week of May weather
What a week of weather across eastern Colorado. From flooding rains, to heavy snow, to accumulating hail, to tornadoes... we saw just about it all. In today's State of the Atmosphere we'll take a look back at the last seven days, an a quick look at warming trend for the week ahead.

Please note that although the snow has ended for most, our below normal temperatures will stick with us through Monday. A Frost Advisory goes into effect Sunday evening and extends through 9am Monday morning for all of northeast Colorado. Any tender vegetation should be protected against the cold.

Snowfall totals
We'll begin with the snow that fell overnight. Snow began falling in earnest early Saturday evening and continued much of the night for many across northeast Colorado. Below is a look at the latest snowfall analysis through early Sunday morning. Heavy snow across western Nebraska and South Dakota, with a band of moderate snowfall extending southwest into Colorado. 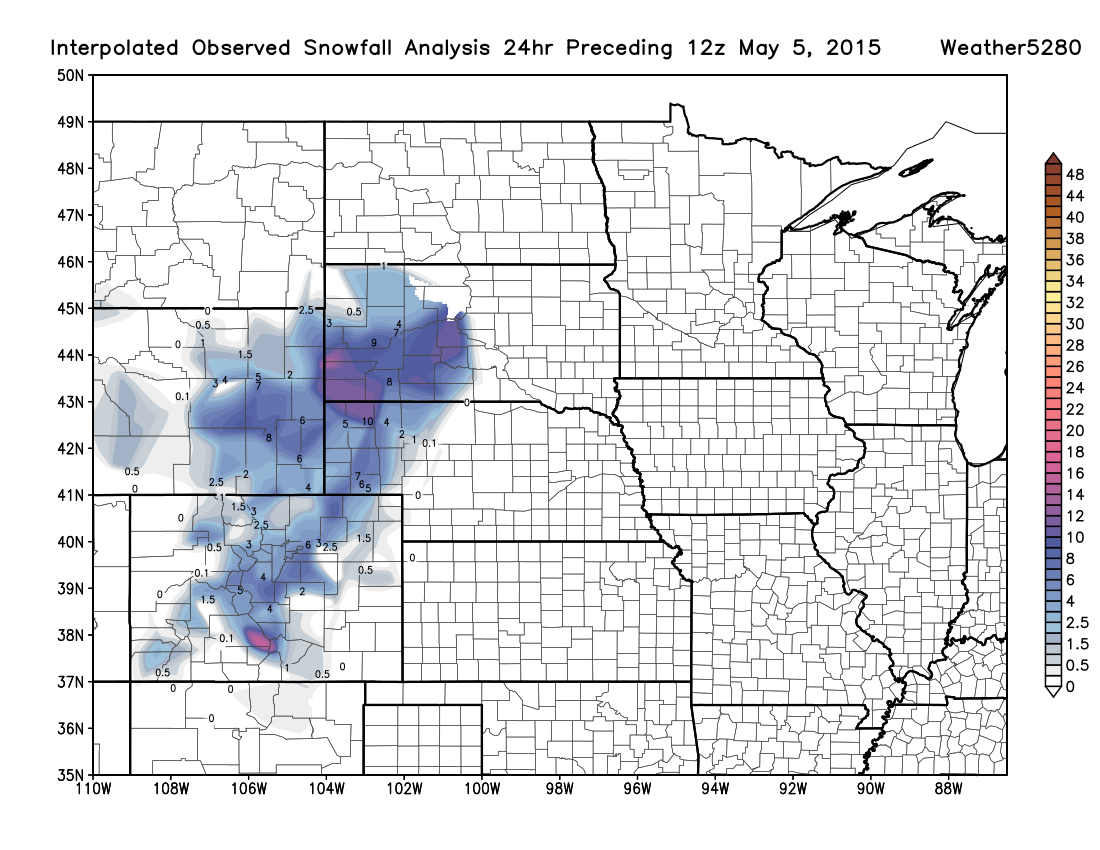 A bit of a closer look at Colorado shows where the heaviest snowfall fell around the metro area. Denver International Airport recorded 4" of snow, a general 3 - 4" falling across the city, with 4.3" recorded at our station downtown. Southeast Aurora took the snow-cake with 8 - 9" being recorded. Also note the lighter snowfall totals north and northeast of the metro, a feature we discussed at length over the last week. 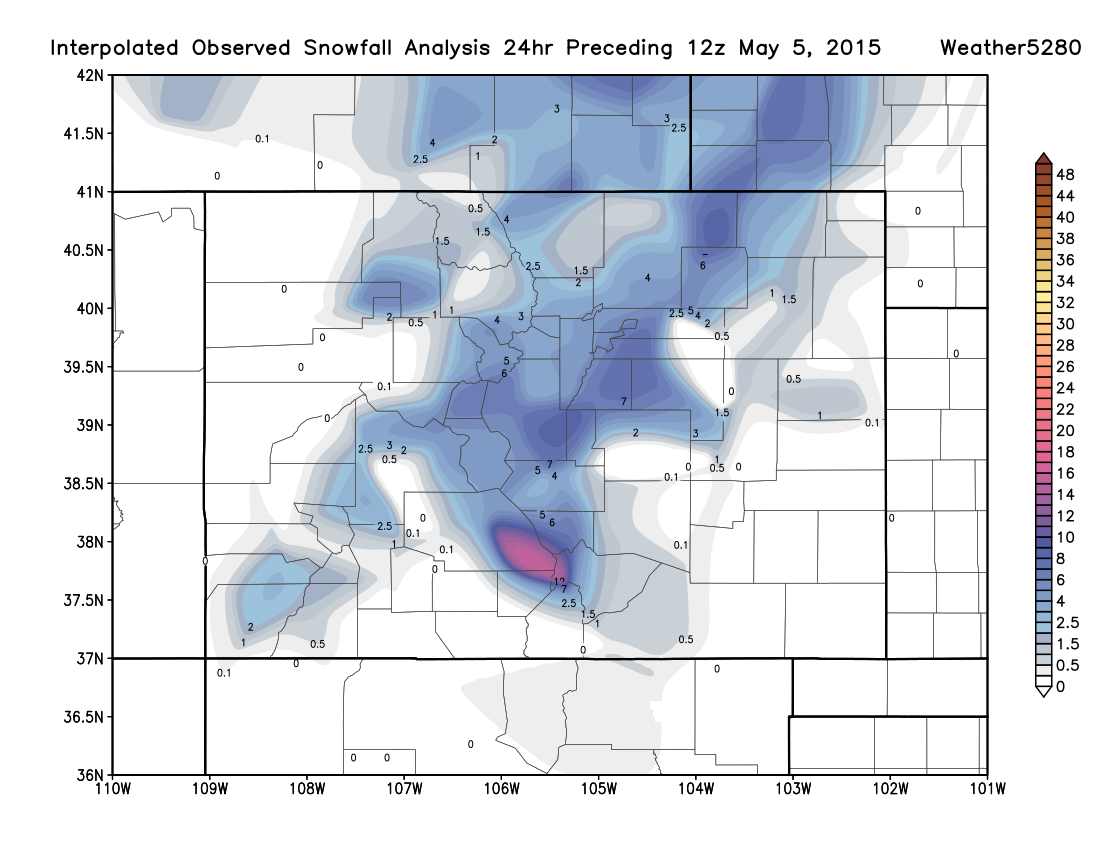 Overall we're very please with how our forecast worked out. On Friday we went with 1 - 4" for Denver, bumping that up to 2 - 6" early Saturday. We also had a streak of heavier snow across the eastern metro area extending northeast which we discussed several times over the last week. This trowal formation was responsible for the heavier snow south and east of the city, quite easily depicted in this radar loop from last night:

A tricky forecast, but again happy where we ended up, especially given the huge spread in forecast totals issued yesterday by all the different outlets. Frankly, the 3 - 5" across most of the metro did enough tree damage we should be happy there wasn't more.

Severe weather
It was the most active severe weather week of the year both for Colorado and the United States. Of the 138 preliminary tornado reports between May 3 and 4pm MDT May 10, 14 of those were in Colorado. Texas, Oklahoma, Kansas and Nebraska also had a very active week, accounting for most of the other tornado reports.

The map below shows all the reported tornadoes (yellow dots), and National Weather Service issued tornado warnings (red polygons) between May 3rd and today. Clicking the tornado reports will show which state and any associated comments with the report from the SPC.

Justin Hughes captured this stunning image of a tornado southeast of Kit Carson on Saturday around 5:15pm, rounding off the day of severe weather across the Plains of Colorado. 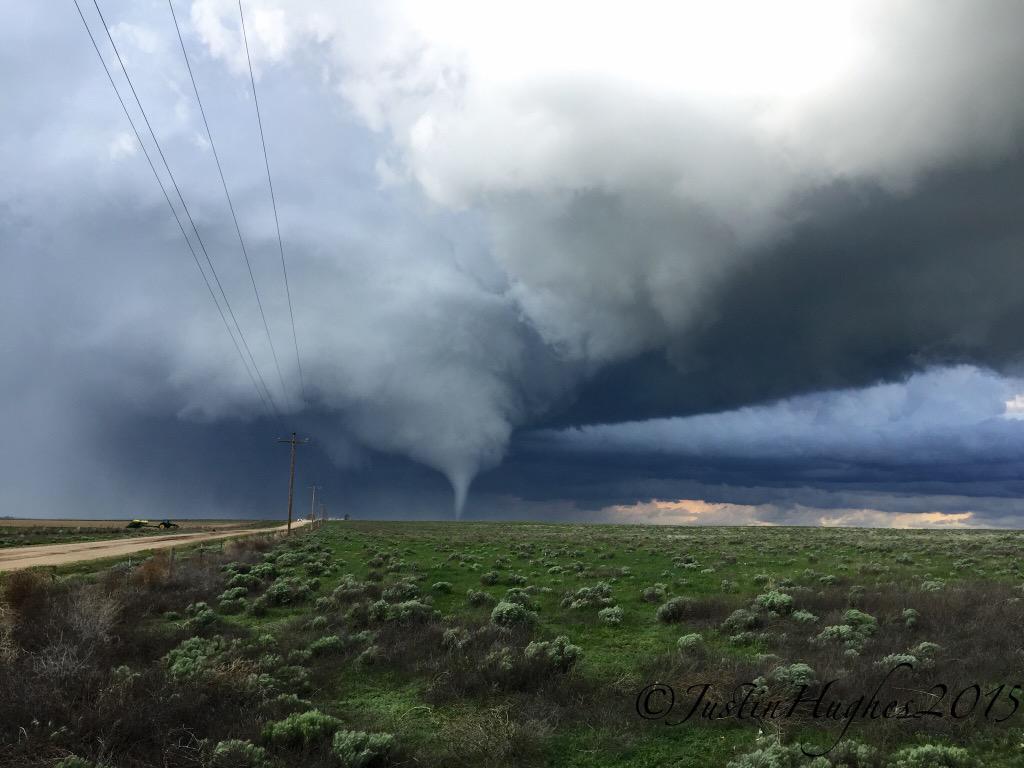 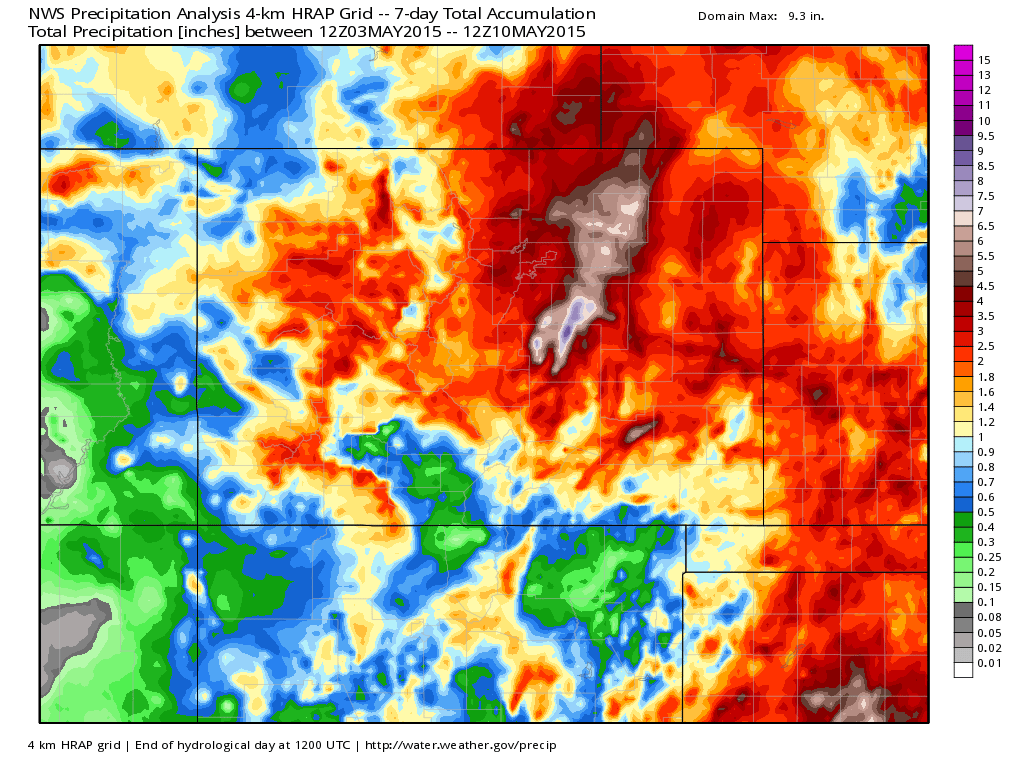 At the Weather5280 station in downtown Denver we've recorded 4.12" of precipitation on the month now, with 2.12" being the long-term average for the entire month for Denver. Across the Plains some locations have seen 5 times the normal amount in just the last seven days, with even some very respectable totals across the southeast corner of the state!

The week ahead and beyond
The week ahead will feature a warming trend for eastern Colorado, and we're likely to see at least a few drier days than we've seen in quite some time.

Monday will remain cool across the region with highs expected to top out in the mid to upper 50s in Denver. By Tuesday, however, temperatures return to near normal to slightly above normal with highs through Friday expected to be near 70 degrees in Denver.

Afternoon storms will return to the forecast for the middle of the week and again by the end of the week. While not as wet overall as last week expect some locations to do okay with afternoon storms. Latest global models keep a handful of shortwaves pushing across the region through next weekend which should help to enhance shower and storm activity at times. A look at the 18z GFS through next Sunday shows some QPF for all of the state, with possibly some of the greatest totals across portions of western and southwestern Colorado. Will need to watch next weekend for possibly something more organized, but a long ways out still to worry too much about that. 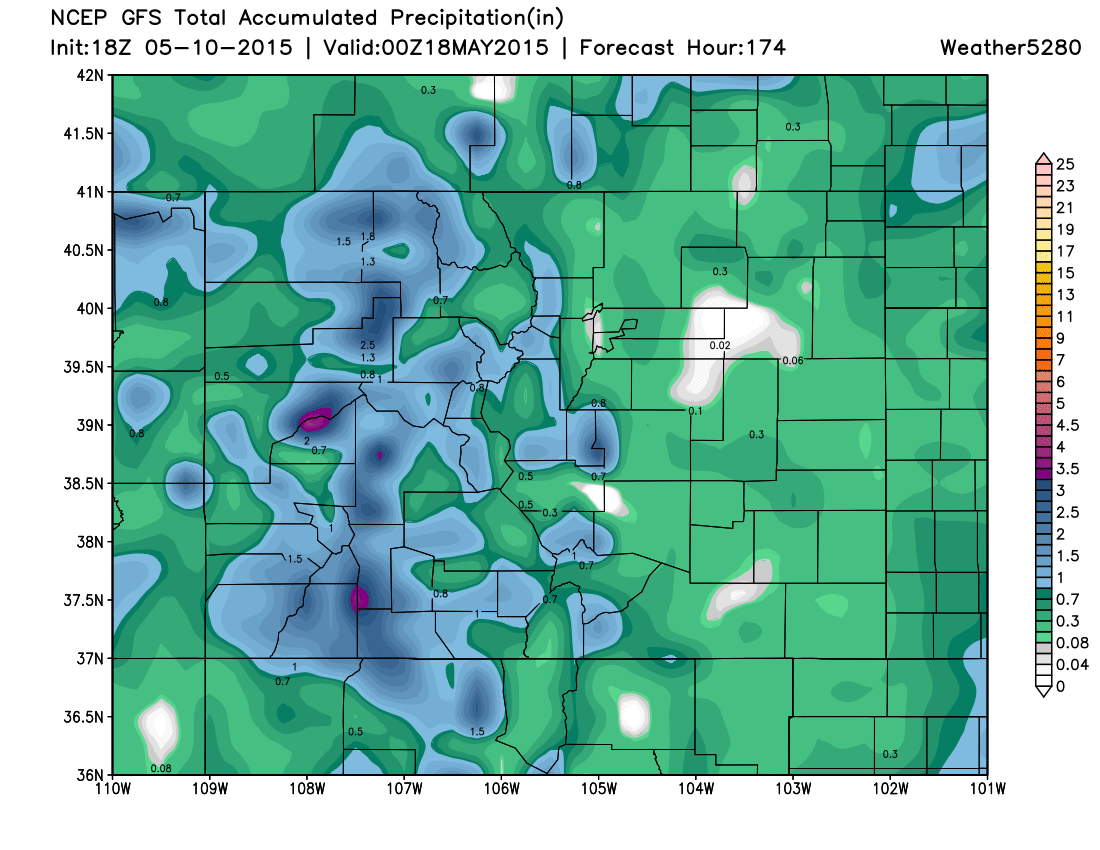 The western U.S. looks to remain troughy through the extended period so no reason at this point to discount more active weather for the state anytime soon. The late show continues.