Month-to-date precipitation totals across Colorado are impressive, particularly across eastern Colorado. May normally sees about 2.12" of precipitation in Denver making it the city's wettest month on average. Through the first 20 days of the month this year DIA has recorded 3.37" of precipitation, which is actually less than much of the metro area which has seen between 4 - 6" of precipitation this month.

Surrounding Denver we've seen even more impressive rainfall this month. Portions of Adams and Morgan counties are running more than 7" above or over 600% of normal for the month, with totals now breaking 10" in many spots since May 1st. Below is a map of the month-to-date totals from the NWS, the purples and pinks indicate totals >7". 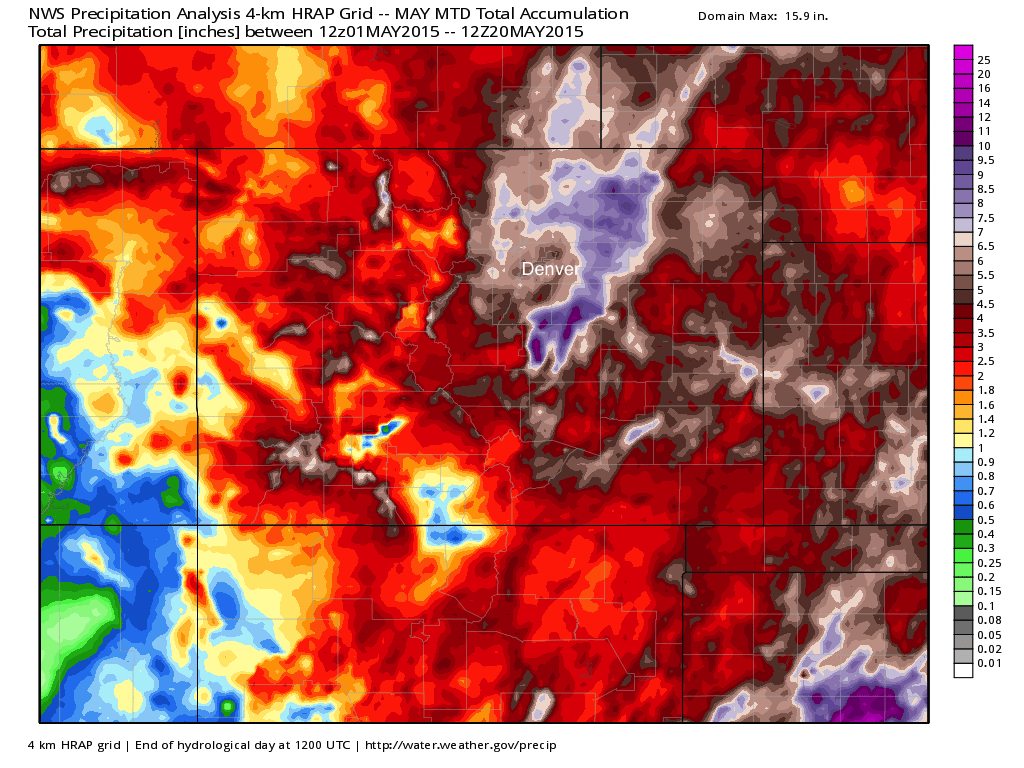 Since January 1st, DIA has recorded 8.45" inches of precipitation, which is a noteworthy 3.64" above the normal to date of 4.81". Many locations across the metro area have already seen >12" of precipitation on the year!

May hasn't just been wet in Colorado, but regionally too. The weather pattern has been persistent in delivering troughs out of the Great Basin, bringing heavy rains to the central Plains states. Below is a look at month-to-date departure from normal (percent) for the U.S., note the drier than normal conditions on both coasts, with the southern and central U.S. doing very well. 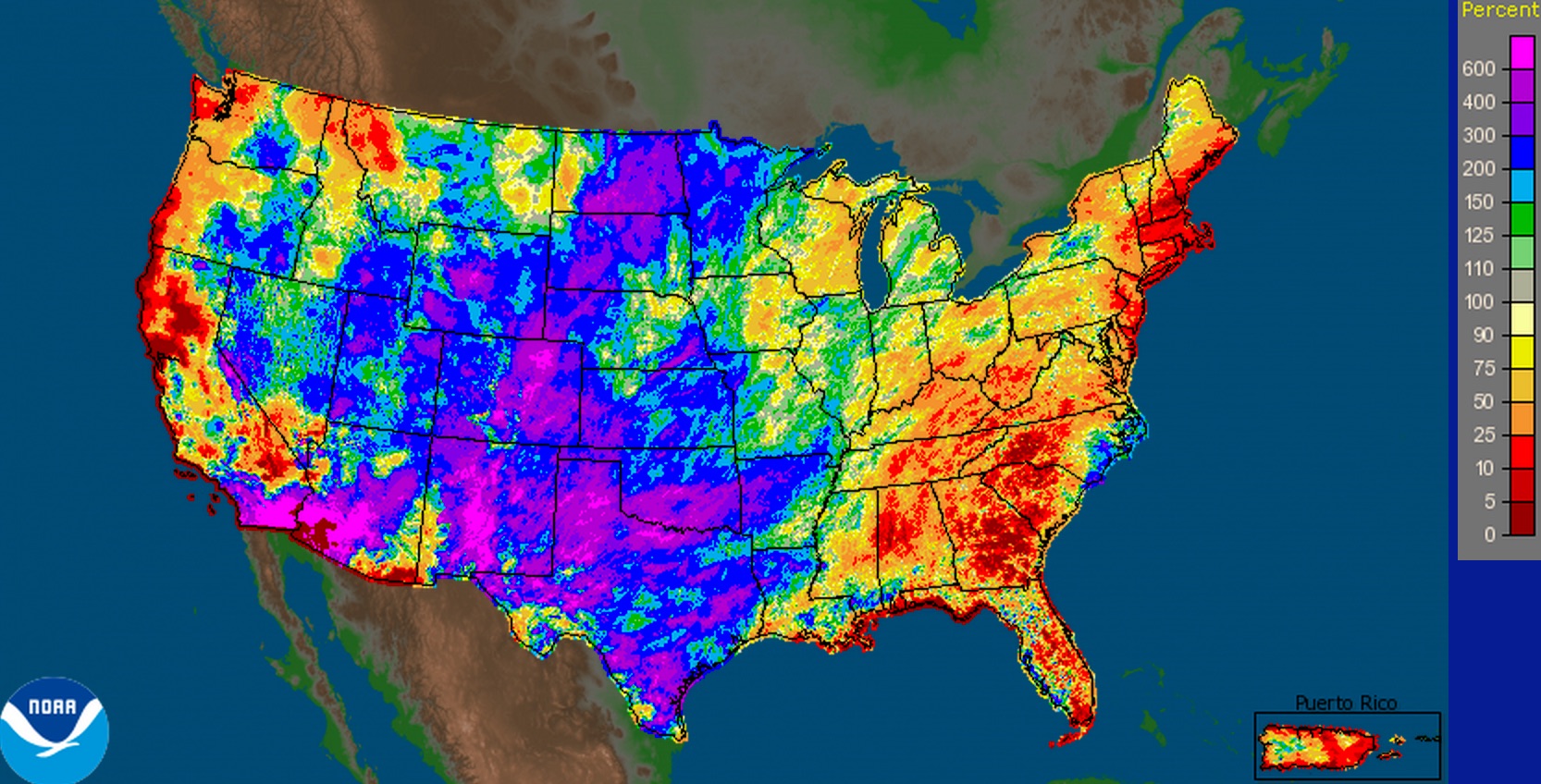 Colorado drought update
Last week we updated you on the huge drought improvements on going in Texas, so today we'll take a look at Colorado. Many people have been asking if all this wet weather means the drought concerns are a thing of the past... The answer is, yes and no.

For southeast Colorado the recent stretch has been huge... Take a look at the latest drought monitor released this morning: 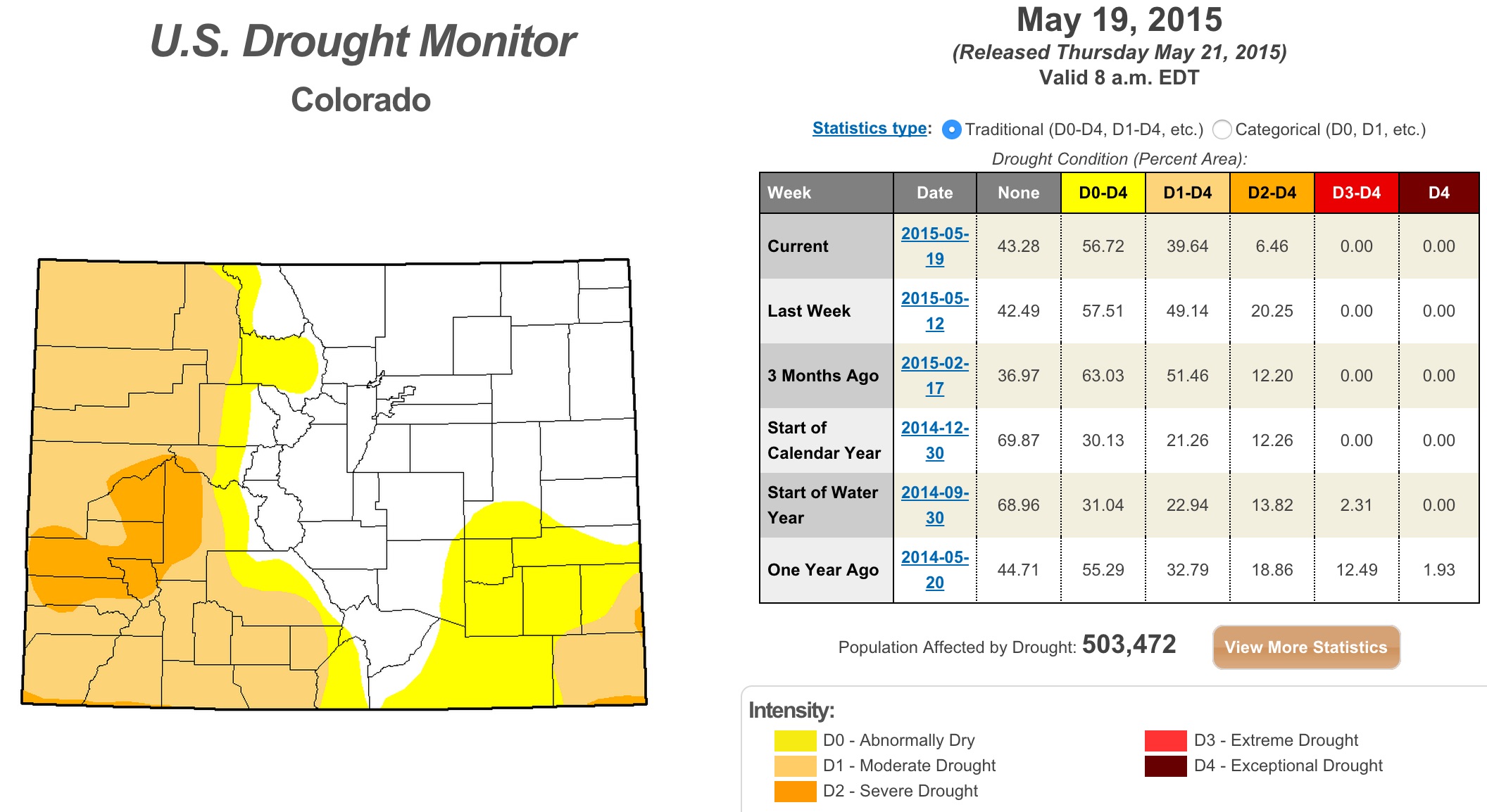 A couple things to note here. We've seen precipitation statewide over recent weeks but the heaviest has been focussed across eastern Colorado. Therefore, western Colorado continues to deal with moderate drought after a below-normal snowfall season. That said, we've seen a 15% drop in the "Severe Drought" category over the last week, much of which was across the western half of the state.

For southeast Colorado the drought improvements continue. Now mostly all "Abnormally Dry" with the extreme corner of the state still running a bit drier. Compared to one year ago however... 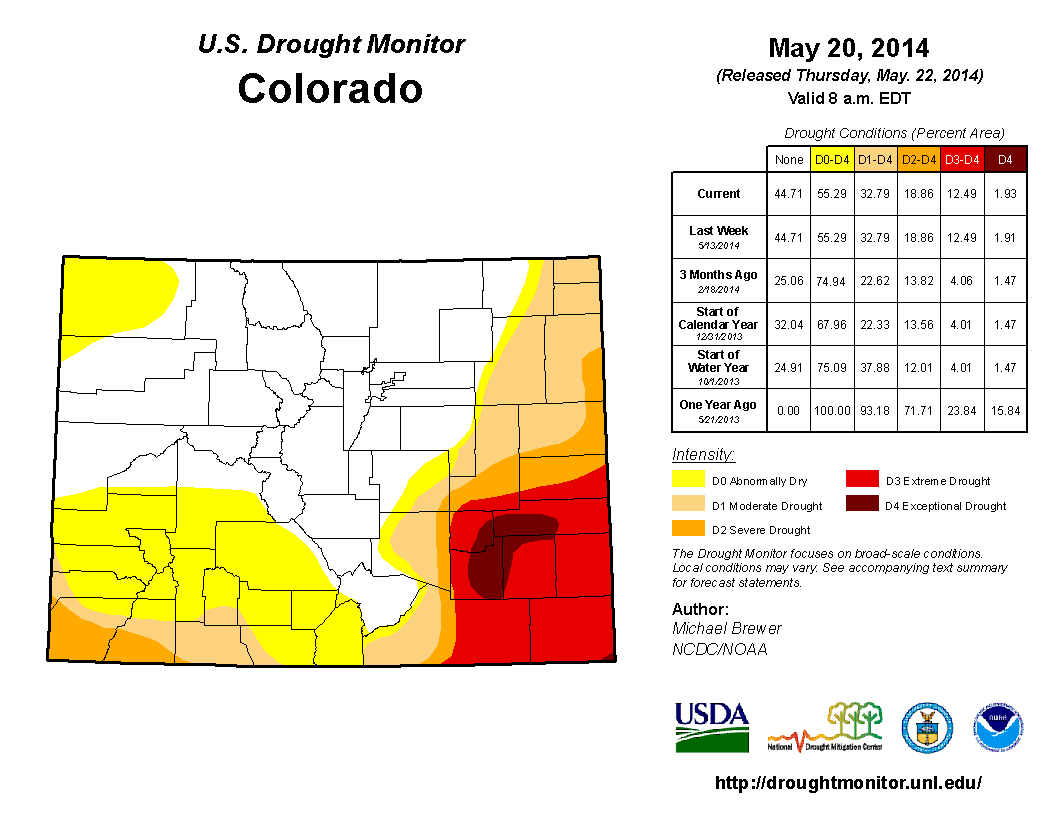 For northeast and central Colorado the streak of wet weather means no drought conditions, a trend we should all hope continues as long as possible. While western Colorado continues to hurt from a lackluster winter snowfall, the recent cooler weather accompanied by rain and snow has certainly helped slow the melt and ease the dry conditions this spring, if only marginally for now.

More rain is in the forecast through the weekend for the region, with likely some severe storms to contend with Saturday as well across eastern Colorado. We'll have an update on the Holiday weekend later today.

Anyone who's lived here for any length of time knows that these periods of wet are few and far between. Let's take it down a notch when complaining about the recent rain. The heat will be back and the sun will return. Drought is always knocking on the doorstep.