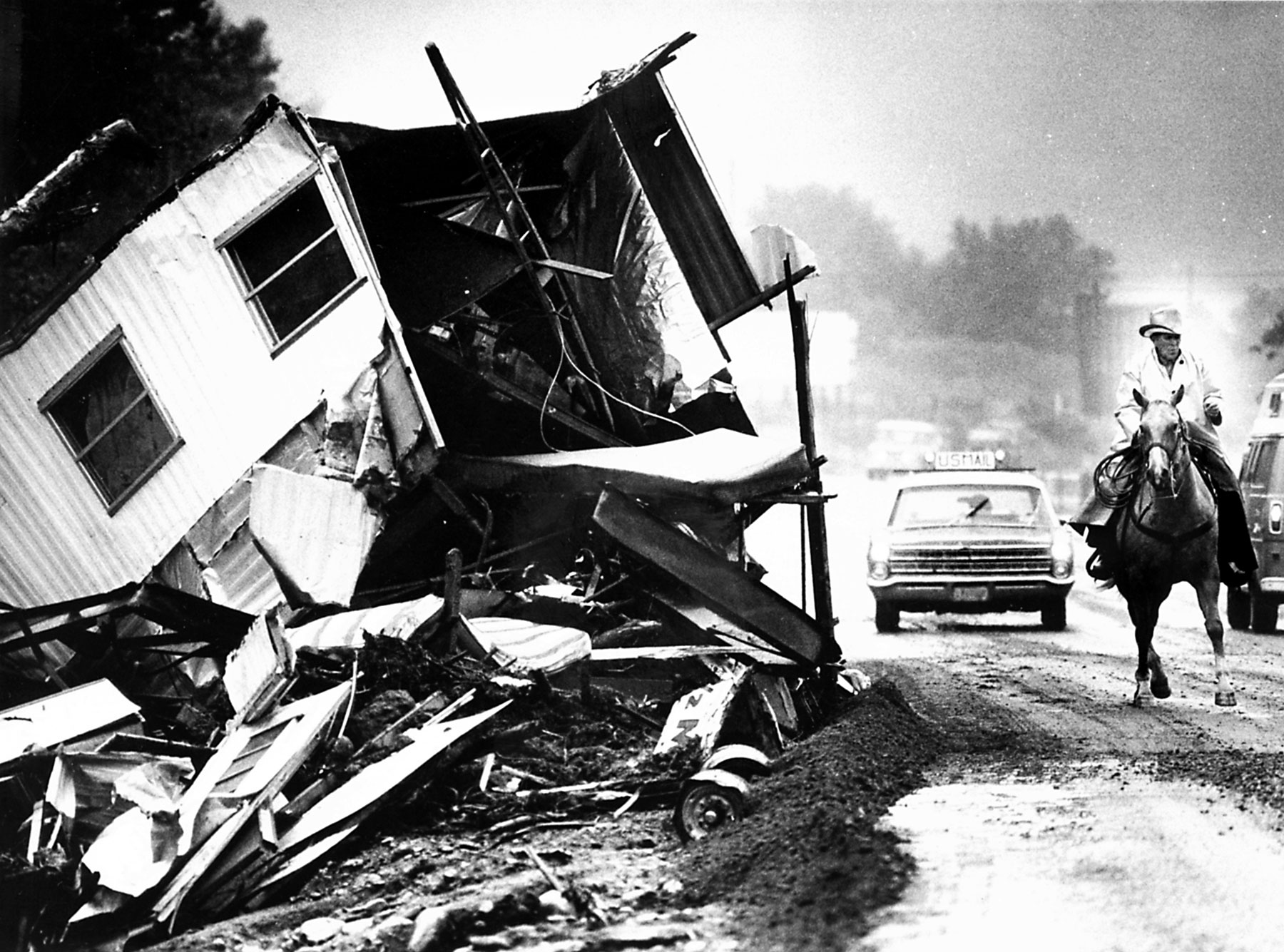 What's Denver's Weather Like in July? Climate Normals and Extremes 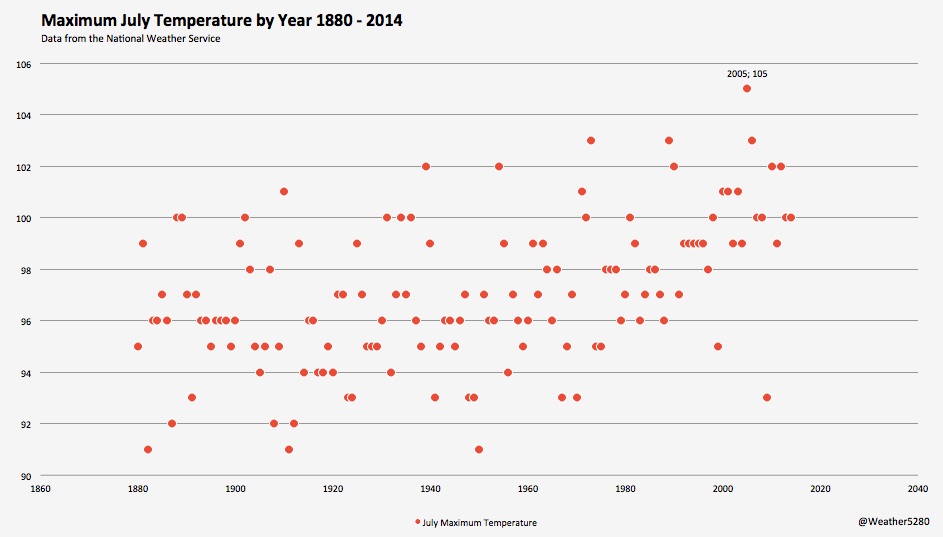 The average daily maximum temperature for Denver continues to climb through much of July, from 87° on July 1, to 90° on July 31. Shortly after the end of July the daily max temperature starts to drop again, back to 89° and falling through the end of the year beginning August 2nd.

Precipitation
July is also the city's second wettest month on average, thanks in large part to increasing 'monsoon' rain during the second half of the month. The month typically starts slow for precipitation in Denver, as there's usually a bit of a lull following the city's wettest time of year May and early June. As the month progresses so too do the monsoon rains, thus the month usually ends wetter than it starts.

A typical monsoonal pattern may look something like this. Where tropical moisture is pumped into the southwest, around a high to the east and low to the west. This extra available moisture helps promote storm development and widespread activity during the latter half of July and on into August for not only eastern Colorado, but Arizona, New Mexico, and the Colorado high country as well. 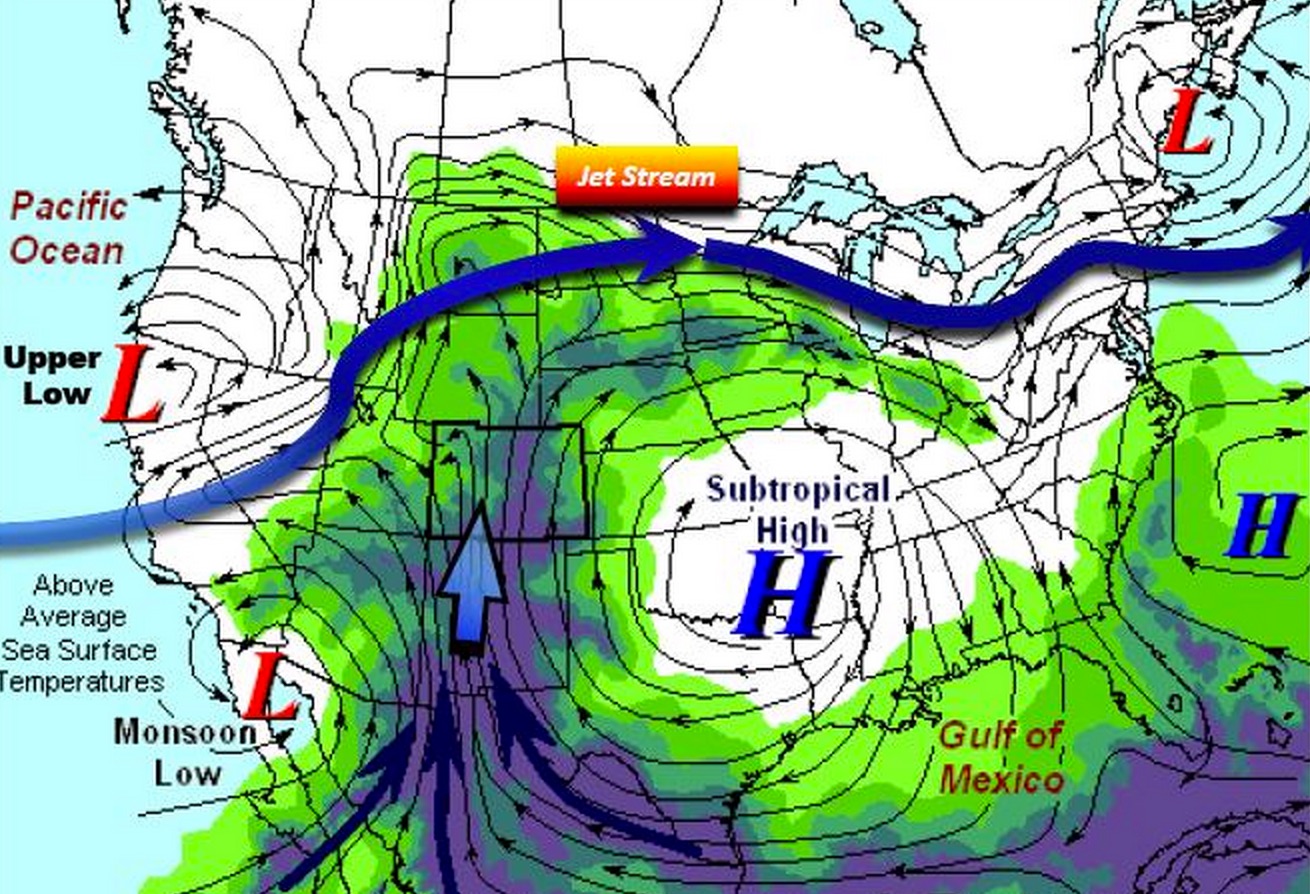 Storms in July tend to move much slower than those seen during the early warm season, and can pack a tremendous amount of moisture. With that, somewhat unsurprisingly, the month lays claim to some of the state's most destructive floods in recorded history. 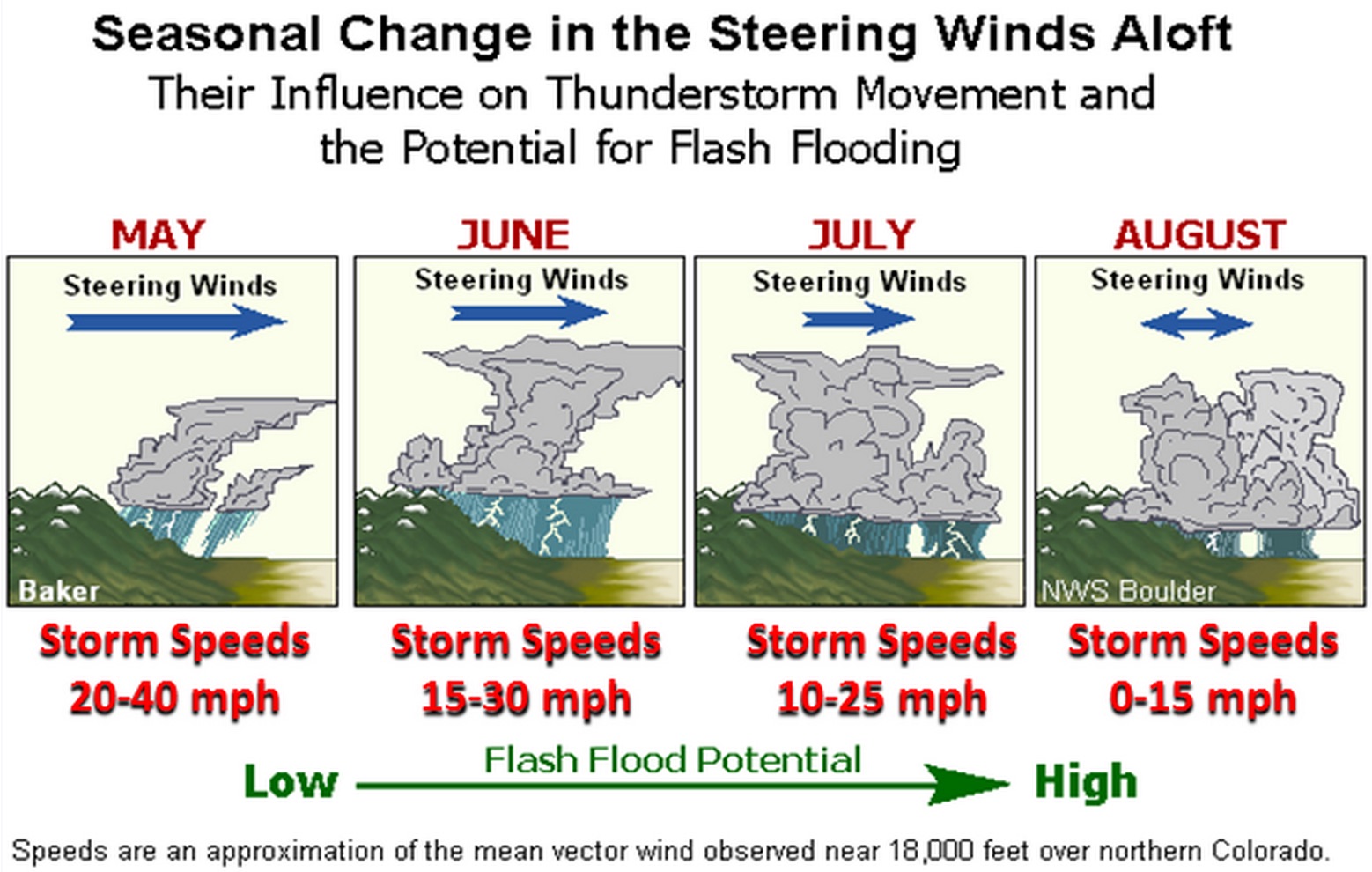 The Big Thompson flood of 1976 occurred on the last day of the month, July 31st of that year. A nearly stationary storm high in the canyon produced more than a foot of rain over the course of just a few hours, sending a torrential wall of water down the canyon – sweeping away boulders, cars, campers, and buildings. It was a very busy day in the canyon as Coloradans were celebrating the state's centennial. The flood became one of the state's deadliest, killing 145 people. In all 418 houses were lost, 138 damaged, and 150 business were either lost or destroyed. 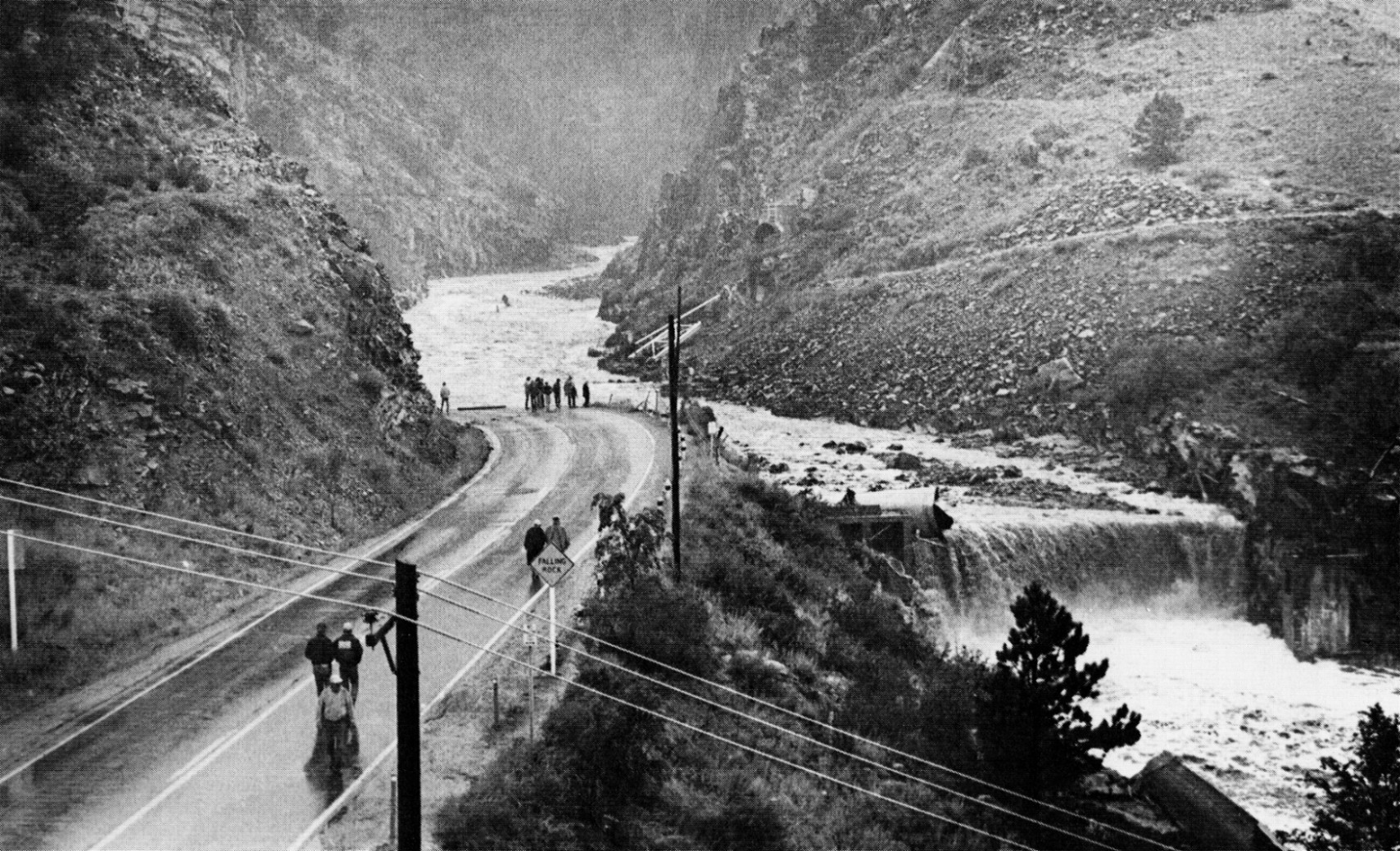 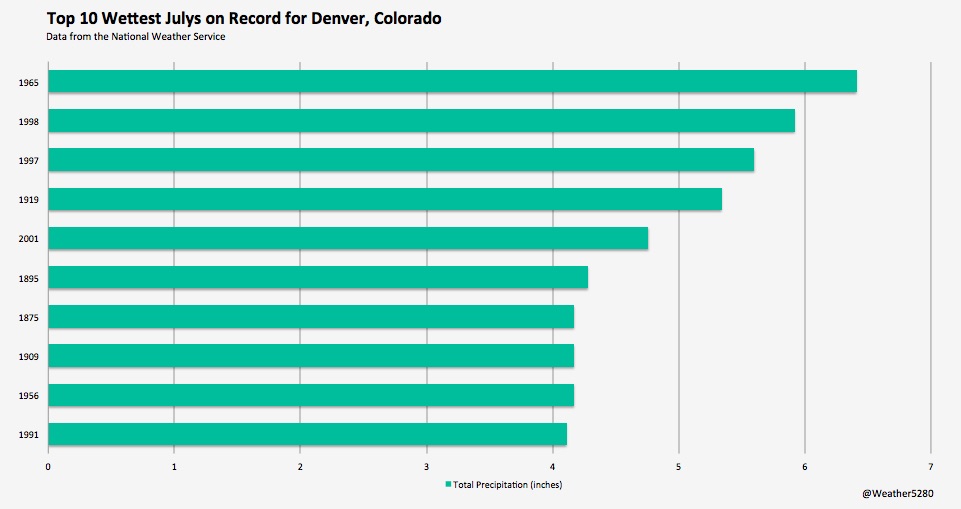 Fire weather season
Mid June through mid July can also mean extreme fire weather for the state, especially in years of drought or when the monsoon is less pervasive. In 2012, for example, the state saw two of the worst fires in its history. The High Park fire which was contained on June, 30th 2012 destroyed 259 homes west of For Collins, and the Waldo Canyon Fire which wasn't contained until July 10, 2012 destroyed 347 homes on the west side of Colorado Springs. Together the fires burned over 105,000 acres. 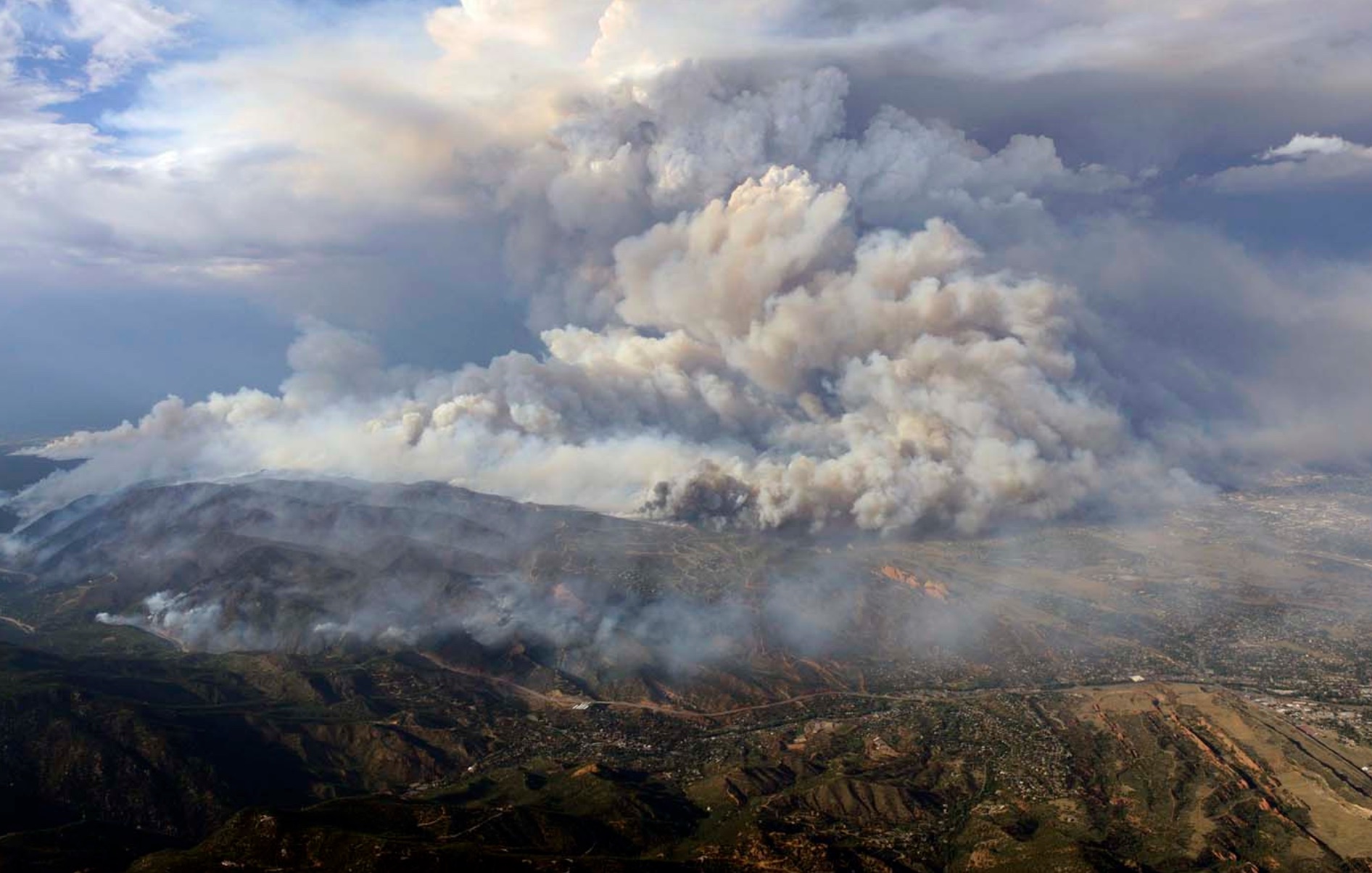 This year we expect the fire danger to remain relatively low, especially as compared to recent years. At 2,265,750 acres burned nationally year-to-date the U.S. is currently experiencing one of the worst first years (by acres burned) since 2011. The Pacific Northwest and Alaska are experiencing a bad fire season. Currently only one fire is burning in Colorado, it is located in the northwest corner of the state and is at 527 acres. The greater concern this year will instead be the potential for an active monsoon season for Colorado, though the fire threat is never zero statewide, especially in periods of drier weather.