July has picked up right where May and June left off, with continued good precipitation for the state. Through the first eleven days of the month, much of the greatest positive precipitation departures from normal have been in and along the Front Range mountains, with the eastern Plains seeing some drying, especially as compared to recent months.

Denver International Airport has recorded 0.60" so far this month, which is just 0.03" below normal for the date. The COOP station at City Park has recorded 0.86" so far this month, with 0.95" at our station. On average, Denver records 2.16" of precipitation in July, with the second half of the month typically seeing more moisture than the first. Below is a map of total precipitation through 12z July 12 for the state: 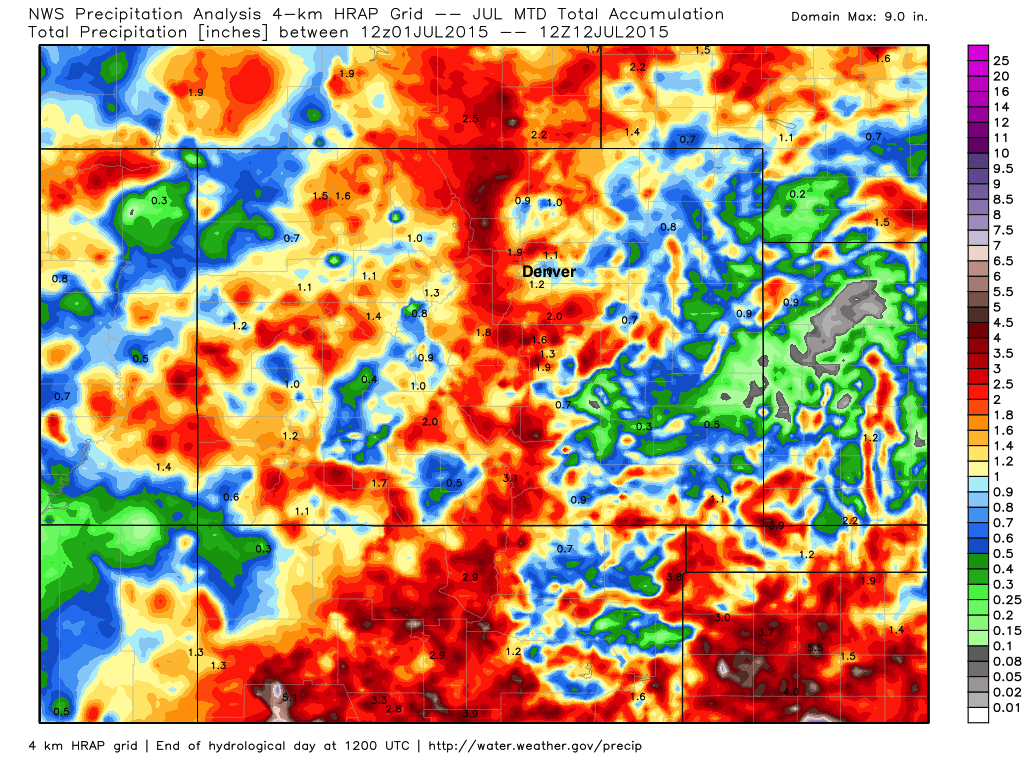 As for temperatures... the last week was impressive. Denver is now averaging three degrees below normal for the month. In fact, much of the country is running much below normal to date through the first 10 days of the month, with the exception of the northwest which started the month with record-breaking heat: 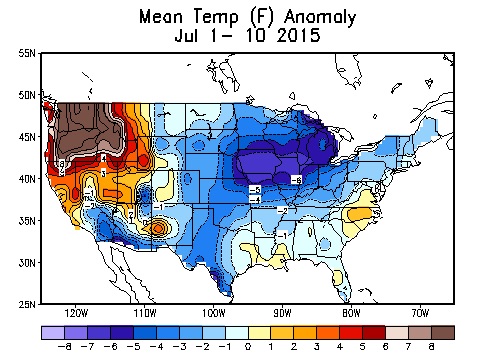 The week ahead
Hard to believe, but the week ahead takes us into the second half of July, already. As we move into what's on average the hottest couple of weeks for Denver, there will be little change to our overall pattern we've seen this weekend, with a warm week on tap.

Precipitation chances will vary day-to-day, but will exist each day as we have seen all summer. Temperatures will be warm – from the mid 80s to low 90s depending on day and location. This will translate to highs averaging near-normal for the week, with overnight lows likely running a few degrees warmer than normal the normal of 59°.

Precipitation chances will be greatest for the mountains again this week, though a few days will feature decent chances across the Plains, depending on how storms evolve off the Foothills and if capping can be overcome. For the first half of the week, Tuesday may feature the best storm chances for the metro areas, though don't rule out locally strong storms on any given day.

A look at today's 12z GFS accumulated precipitation forecast (through Friday) map shows very clearly the plume of subtropical moisture being funneled into the state, with greatest QPF forecast for the mountains: 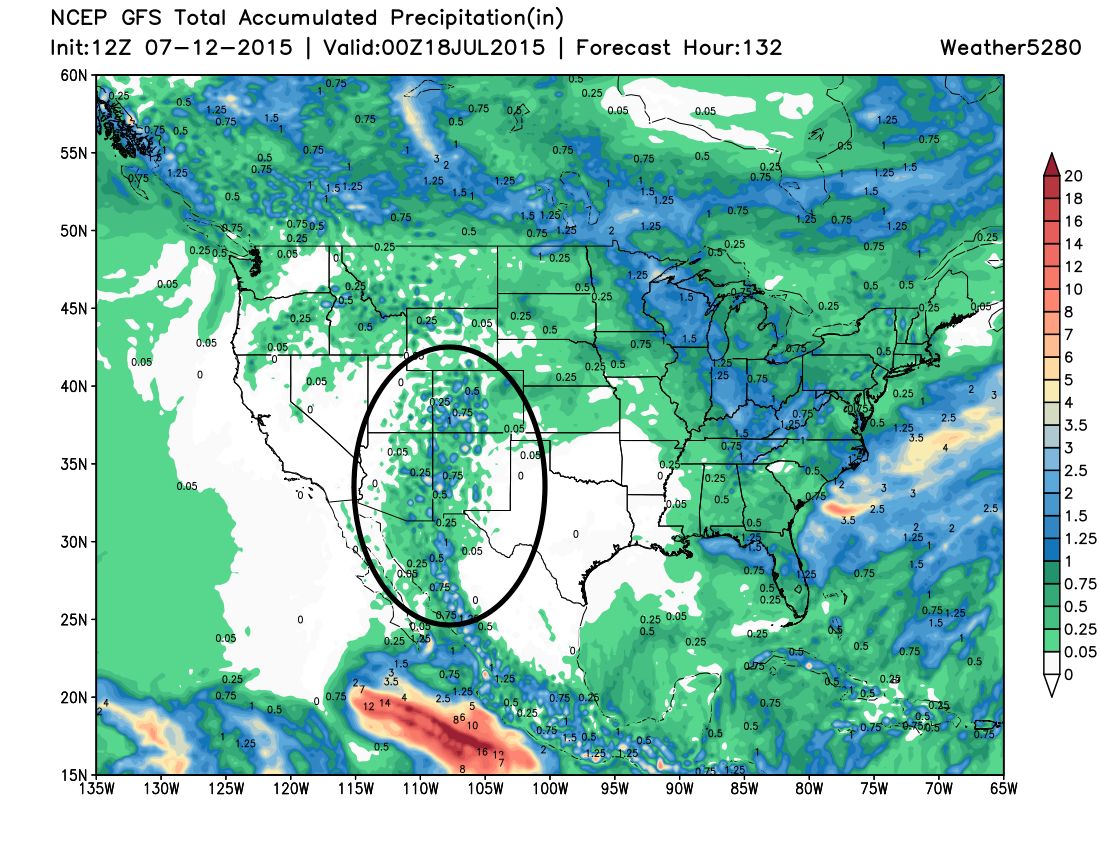 And a look at just Colorado precipitation through Friday (try not to take too literally): 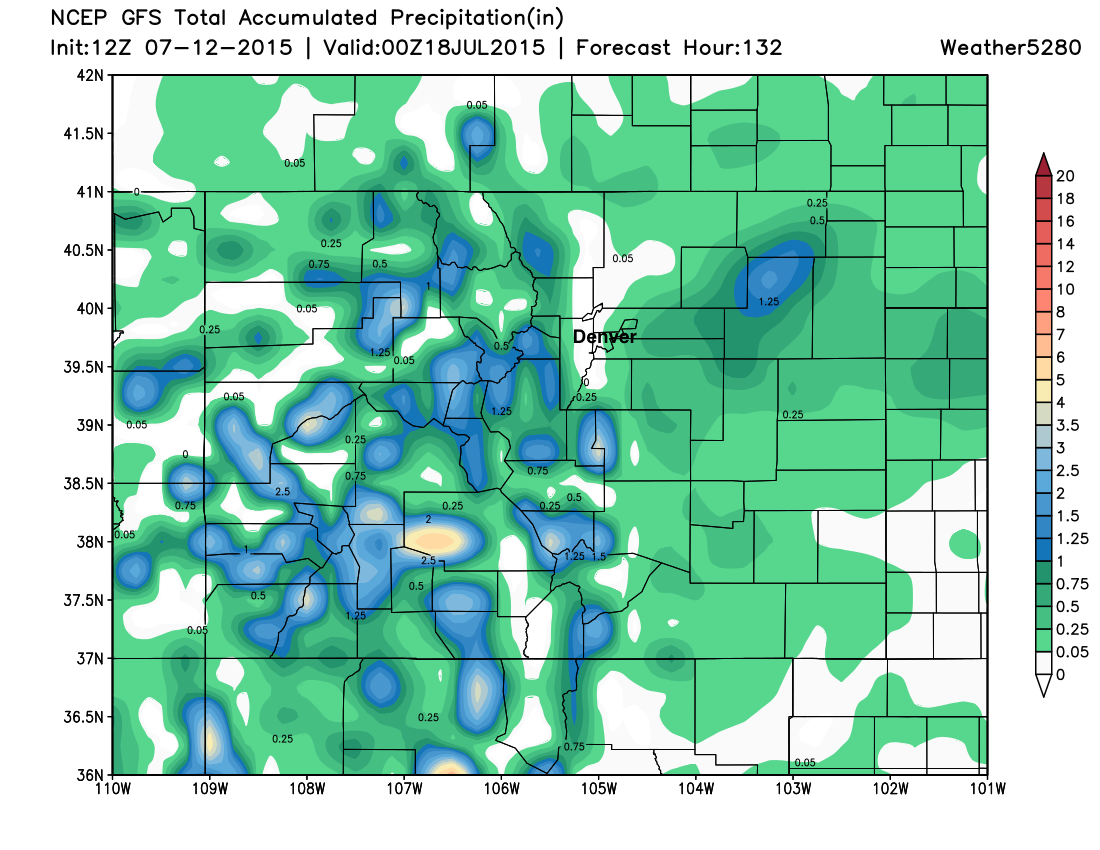 Overall a very typical and transient pattern in place, which should keep any extended periods of hot weather at bay, and precipitation chances rolling.

El Niño mention
If you missed our update to start the month on El Niño definitely check it out. Brian Bledsoe has spent much of the weekend analyzing analogs, so look for discussion surrounding these in the weeks to come. We're also working on a handful of other related articles, so while the weather may slow from time to time, we keep working to stay on top of our long-range outlooks has we head toward the second half of summer, and eventually fall.

Current SSTs are impressive, leaving no doubt about the El Niño underway – a very classic look. What's important to remember (and you'll see us address over the coming weeks) is that there are other factors at play, despite the attention Niños get. Note in the anomaly map below how warm the Gulf of Alaska remains, and the cooling the the northern Atlantic. These are both key factors when we start thinking about what kind of winter may be on tap this year. 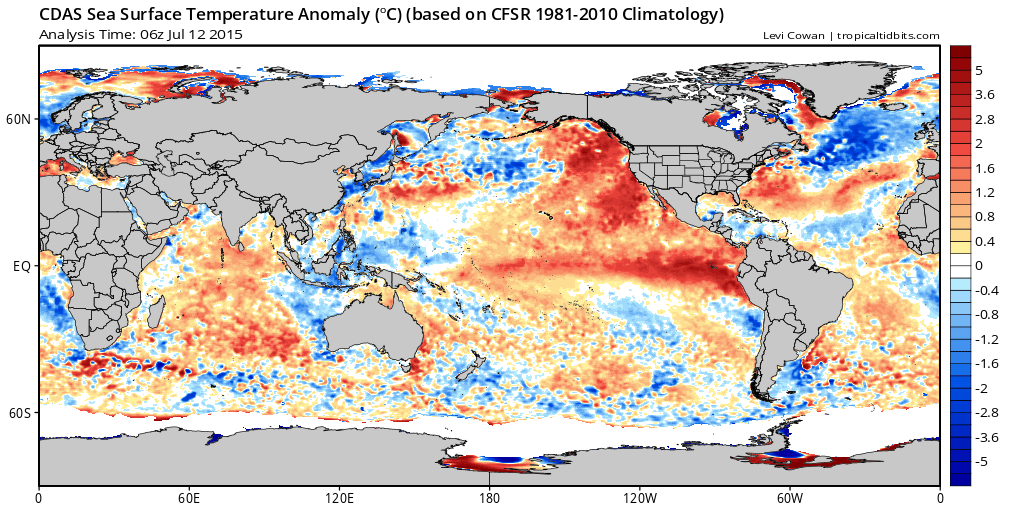 An exciting time, and a lot to track as the large-scale pattern continues to evolve. We'll offer updates through the week on and potential (widespread) wetter days. In the meantime, prepare for a typical summer week with storm chances each day, and of course subscribe to weather5280 to stay up to date on all the latest.