Subtle Differences to Previous El Niños Key to Winter Forecast, And Why the PDO Matters

There are a lot of comparisons to the El Niño of 1997 taking place right now, and while certainly an analog to this year, there are some differences to keep an eye on before jumping head-first into the repeat boat.

Each El Niño is its own animal. When looking at analog years, it's important to remember that what's happening in Niño regions isn't the only factor to weigh. It's important to also consider things like: where the Niño is occurring within the greater long-term cycle; is it in its first or second year; what is the current state of the PDO (how about the AMO?); do we expect a cooling PDO or warming over the next 12 months; and of course what similarities in strength and positioning this El Niño shares with prior events.

Below are two maps comparing July 1997 (left) and July 2015 (right) sea surface temperature (SST) anomalies. There are several takeaways from this image. The first, is the establishment in both years of a strong El Niño signal. This, however, is where the similarities start to break down. Note the incredibly warm water in the northern Pacific this year compared to 1997. Also note the very cold water in the northern Atlantic, warm Indian Ocean, and warmth of the east coast of Australia, then compare to 1997.

If we look at another "Super Niño" year, 1982, we see even greater differences in SST anomalies for July, not only in the northern Pacific, but also in the Niño regions. With that, despite eventually evolving into a strong El Niño, 1982 is currently not one of the analogs we're using.

These difference are important, and despite the excitement around this El Niño, can lead to largely different weather patterns as compared to prior Niño events. Today we'll look specifically at the PDO.

The PDO
The Pacific Decadal Oscillation, or PDO, refers to long-term ocean temperature patterns in the Pacific. While we are currently in a long-term "cool" or negative phase of the PDO, the PDO can still go positive from time to time, generally for shorter periods of time. The PDO went positive in early 2014 and remains so today, though we continue to think it'll drop back negative within the next couple of years, if not much sooner.

A positive PDO, as we are experiencing now, means warm surface water along the west coast of north America, with cool water in the north-central Pacific, while a negative PDO is opposite. Ignoring all other factors, positive PDOs tend to promote ridging over the western U.S. during the winter, while negative PDOs promote troughing. 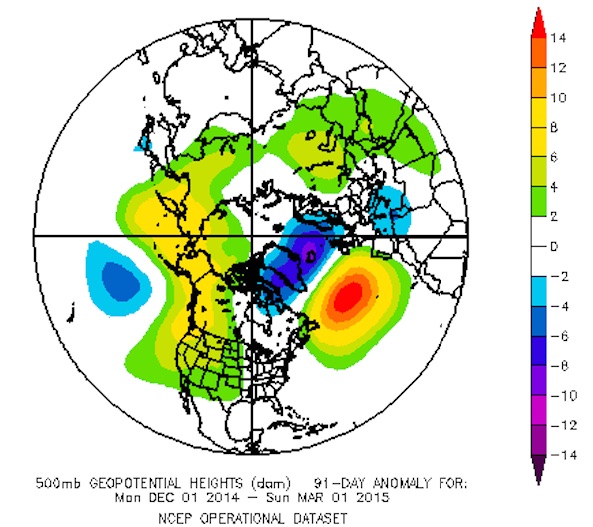 For Colorado, the role of the PDO is more of a delicate balancing act. While generally speaking the warm phase of the PDO is better for precipitation across the state through the course of the year, when the western ridge is too strong – it can seriously hurt snowfall across the state during the winter months, and generally keep our winter temperatures up as well (ala 2014 - 2015).

The challenge in long-range forecasting for Colorado often stems from finding the "sweet-spot". Given our location geographically, we're often right on the edge of either a western trough/eastern ridge or as has been the case in recent years a western ridge/eastern trough. The strength of both, coupled with other drivers (such as ENSO) all come together to drive our winter weather pattern, for better or worse.

With regard to the PDO, there are a few interesting things to consider when comparing this year's Niño to '97. The first is, the PDO was very positive in July of 1997 at 2.35. This June (which is the latest PDO index available) the PDO was 1.54, notably lower. However, if we look at the SST comparison image above, one would suspect the PDO this year has increased since June with very warm water off the coast of North America. Again, a strongly positive PDO may again promote ridging in the west this year, despite a more pronounced El Niño present.

Analogs
Suppose nothing changes between now and October (and it will) here's what our current top analogs look like for precipitation (left) and temperatures (right) for October through April. These are largely based on current SST anomalies and similar multi-year periods.

Interestingly enough, the top analogs which favor higher July PDOs do not show pronounced ridging over the extended Oct-Apr period. This is largely due to the fact many of these years saw a big drop in PDO between July and December. In 1997, for example, the PDO went from strongly positive in July 2.35 to 0.67 by December. The question is, what will the PDO do this year, something we'll a better idea of over the coming months. Also taking such a large subset of months can be a bit misleading as the cold/precip can be front or back loaded (or both) with dry in between. In this case, a look at these analog years for just the Dec-Feb winter months actually shows a similar pattern to what's shown above.

In a "typical" El Niño year, Colorado will see greatest precipitation early in the season, and in spring, with often drier/milder winter months (Dec-Feb) in between. The fear of course (for snow lovers anyway) is that a persistent strong PDO would exacerbate this with the presence of a western ridge. Given the analogs we are currently favoring, one would suspect that while we will have to deal with ridging from time to time, should the PDO break down a bit as we head into the next few months... this will be less of a problem. Time will tell.

Impacts on upcoming snow season
Simply put, we still just don't know. While many are optimistic this El Niño will bust California's drought, we remain more cautious given the state of the PDO and other considerations. Is it possible we see above normal rain and snow this winter along the west coast? Yes. A given? No.

Related: "The Hype Continues..." a look at what El Niño may mean for California resorts from Open Snow.

For snow-lovers across northern Colorado, you'll likely want to wish for the PDO to come down a bit, so the ridge isn't quite as resilient this year. At face value (and mind you we're in mid July right now), it looks like southern Colorado would be more favored for below normal temperatures and above average snowfall as compared to northern Colorado this winter. The key going forward will be, not only the evolution of the El Niño, but also the PDO. A persistent ridge this winter would be awful news for those in the west and northwest banking on El Niño to come through with moisture, and a crap-shoot forecast for northeast Colorado.

While the focus today was around the PDO, as mentioned in the opening there are more factors to consider as well. In future posts will talk about the SOI, AMO, and likely start laying out in more detail some of the analog years we are using and why. Lastly, Matt Makens is also busy crunching some numbers on El Niños and Denver snowfall, some of which may surprise you.

Key takeaways from today should be:

Not already following Weather5280? Subscribe today to be kept up to date with all the latest weather from Colorado and abroad.