A quick State of the Atmosphere today as our typical summer pattern continues. For Denver, the last week was very warm, with an average high of 92° (roughly 3° above normal) over the last seven days. The warmest day of the week came on August 5th, when Denver International Airport reached 96° degrees F for a high.

For precipitation we did a little better over eastern Colorado as compared to the week prior – though for those living in the northern urban corridor, the week was still largely dry.

The Week Ahead
The week ahead should very generally feature temperatures a little cooler than last week, with most days staying in the 80s, and low 90s for highs. Monday and Tuesday will be the coolest days of the week with highs in the low to mid 80s behind the passage of our next cold front, before warming for the second half of the week to near-normal.

With the cooler temperatures Monday and Tuesday I do think we see a better chance for storms in and around the Denver area. The biggest concern may end up being a cap-bust, but considering how dry we've been across much of the metro areas, a better chance is still a better chance at this point.

The NAM is trying to agree with this, with the 4km NAM producing some nice rainfall across the area Monday evening. The 12km NAM is less impressive for the Denver area, keeping best activity around higher terrain southwest of Denver, and again east/southeast of the city. We'll see. 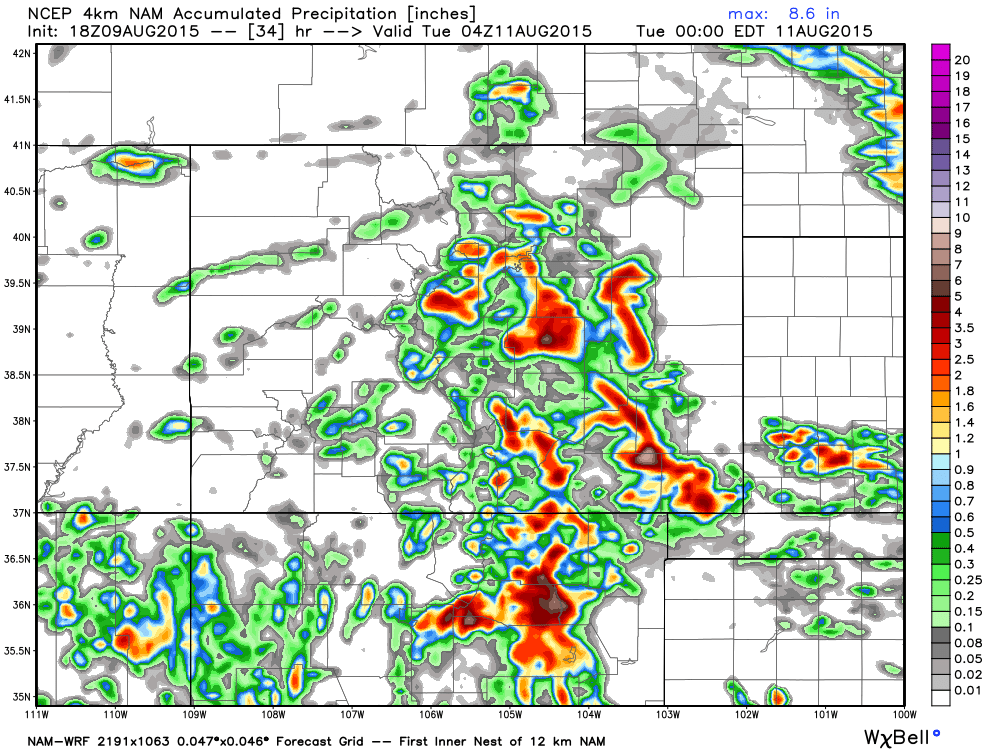 A quick look at the latest GFS for QPF through the end of the week also shows slightly better coverage than we've seen in recent weeks, though again largely unimpressive for the urban corridor. 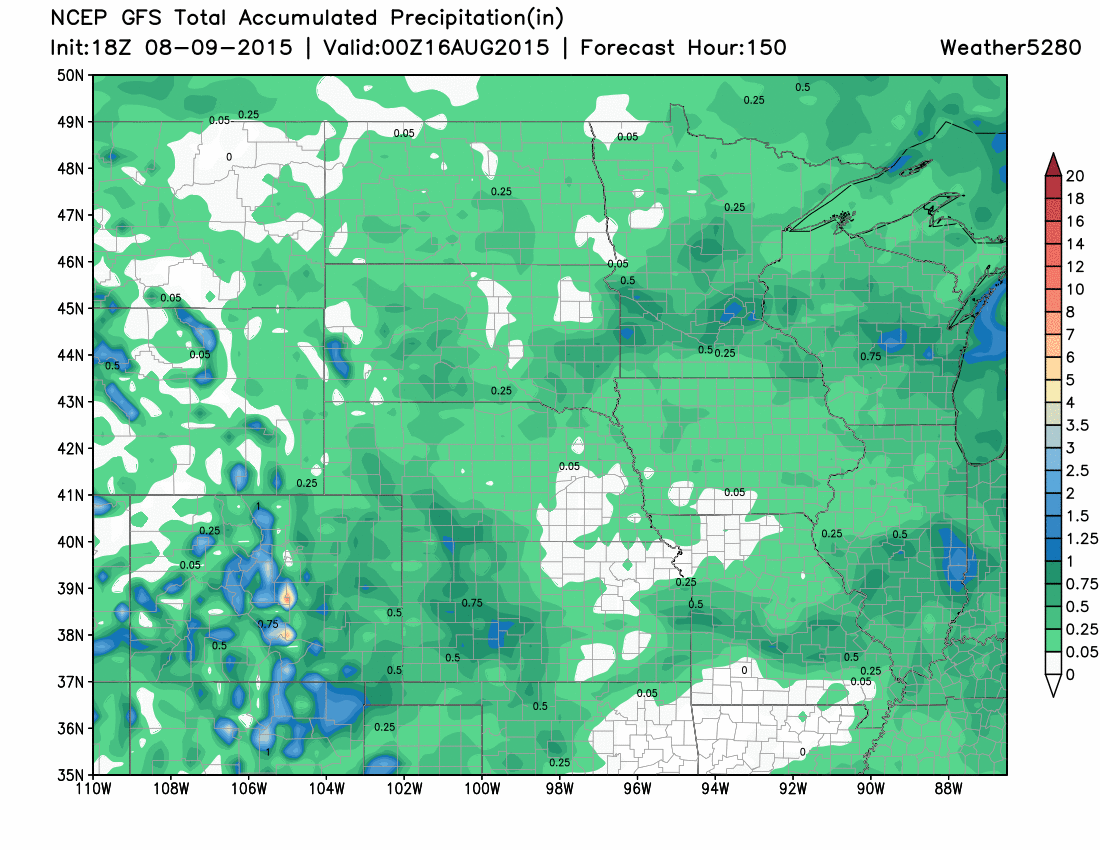 If we can get storms to fire on Monday (or Tuesday) they will have the potential for produce locally heavy rain. PWAT value are forecast to climb near to >1" for much of eastern Colorado both days. The question will be, will we have enough instability to work with to get storms going for the metro areas. 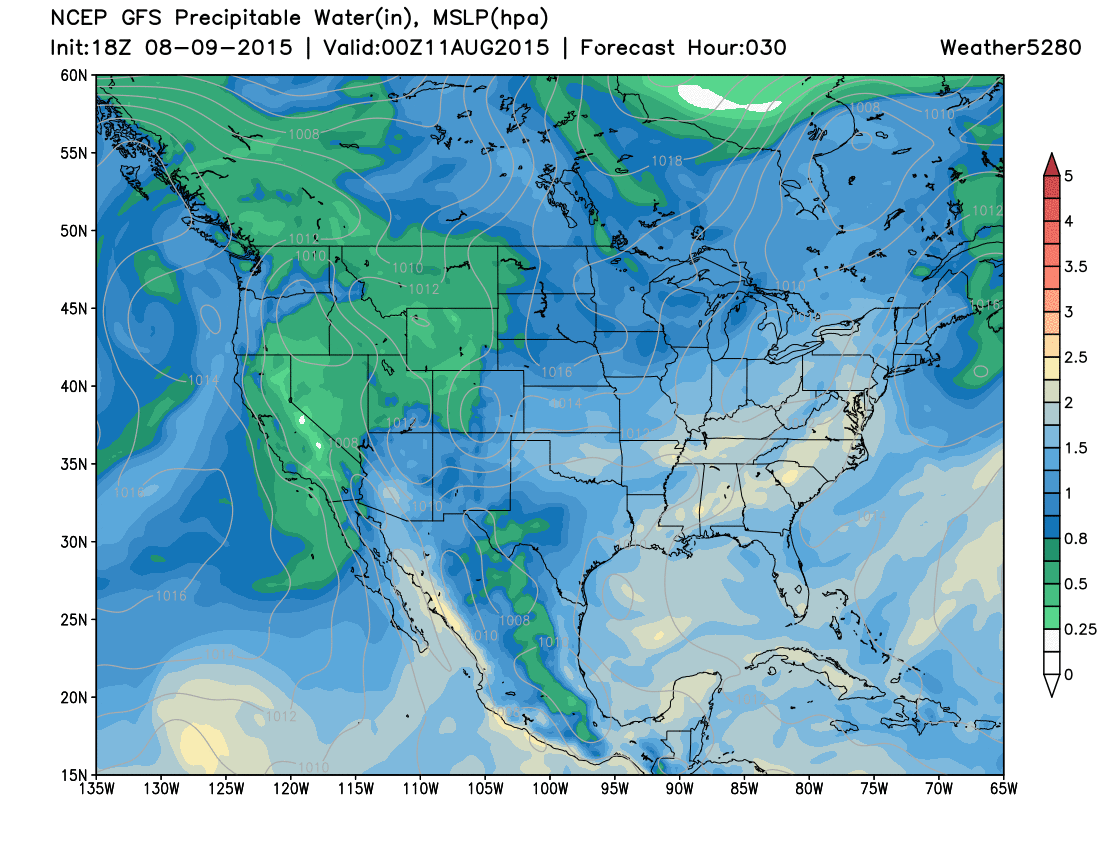 Cruise control
As we look to next weekend and beyond we really look to remain in cruise-control. At a high-level, I'd say that we look to have more moisture to work with over the next period and with that I'm a bit more optimistic we see greater shower/storm activity than we have in recent weeks across eastern Colorado, but for now not overly excited about any given impulse or another. The GFS/ECM/Canadian globals models all look better with regard to moisture over the next 10 days, but where exactly that ends up, and how much of it we see remains to be determined. The Euro is favoring a more southern bias in subtropical flow, while the Canadian is further north. The GFS is somewhere in between, but not as wet overall. All in all, cautiously watching the potential for a wetter pattern as we head later into the month of August.