I'd be lying if I said the SOTAs over the last month or so haven't been somewhat difficult to write. Outside of a few stormier days, the weather across the northern Colorado has been pretty straightforward recently; our more active over the next few days should likely came as a nice change of pace for many folks tired of the recent fairly boring weather.

Today we've got a lot to talk about.

First, however, let's look back at this past week as the state actually saw quite a bit of rainfall over the last seven days, though I know this wasn't true for everyone. Also note the month-to-date totals as we are now halfway through August. It's been wet across much of southern Colorado as well as for northern New Mexico, the Texas panhandle, and extending into western Kansas and Nebraska.

Temperatures over the last week were quite warm as well, including a cook-an-egg-on-the-tarmac 98° at Denver International Airport yesterday. This tied the record high for the date, set back in 1960 and was also the warmest reading we've seen all summer. Only two of the last seven days saw below average highs for Denver, with the average high for the week running 3° above normal over the last week at 92° F.

The other big news over the last week was around, what else, but El Niño. While some were busy coming up with the most creative name for this year's event, Matt Makens put together a great post -- without any hype -- on what El Niño can mean for Colorado. If you missed it, check it out now.

The week ahead
The week ahead will feature some of the coolest temperatures we have seen in months, with overnight lows possibly dropping into the upper 40s Tuesday night for Denver (!). Ahead of this dramatic temperature drop will be the threat of severe weather across eastern Colorado, both today, and again Monday, and possibly even Tuesday for some.

The severe weather threat today will be greatest across northern Colorado, extending into the northeast corner of the state this evening. We're already seeing strong storms firing along the Front Range this afternoon, producing severe weather and flooding rains. The storms will continue to develop and push east through the afternoon and into Sunday night, capable of producing hail, damaging wind, flooding rain, and a tornado. 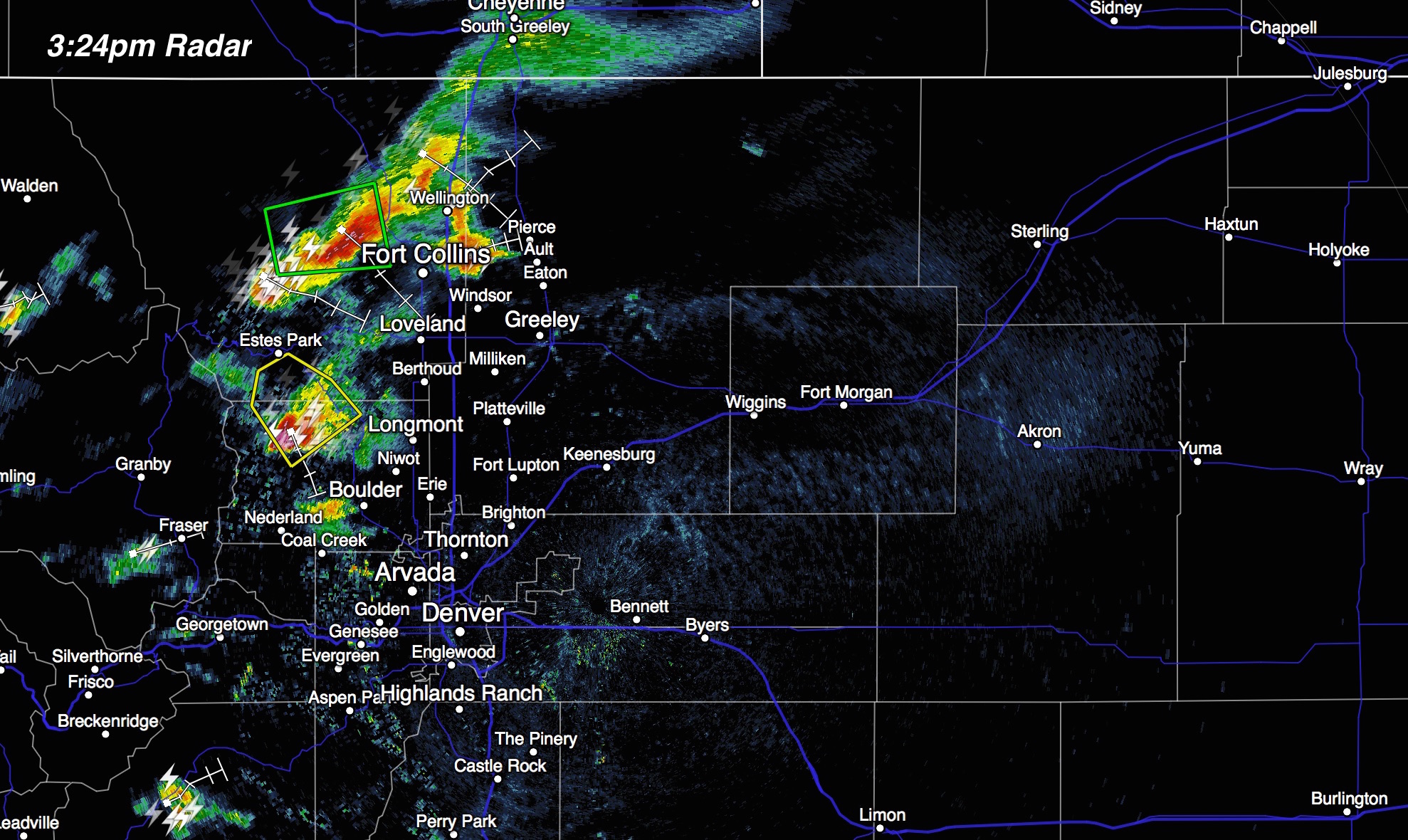 By tomorrow, the severe weather threat grows to include most of eastern Colorado, with hail and damaging wind being the primary threats. It's a bit unclear how great the tornado threat will be at this time, but certainly don't rule it out at lower elevations. There will be a good amount of moisture around Monday, decent instability, and enough shear to keep things interesting. Forecast models are showing CAPE values >2000 across the Plains Monday afternoon, with shear (at least briefly) reaching 40 - 50kt across northern Colorado. The latest 4km NAM shows the greatest ingredients coming together by late afternoon Monday, though timing will need to be watched over the next 12 - 24 hours.

CIPS analog guidance still suggests an active day Monday as well, though doesn't look quite as impressive as it did yesterday. The severe forecast remains a bit tricky for Monday, still, as there will be number of ingredients in play, and a layer of more stable air around in the morning that will need to be mixed out too.

Rainfall totals over the next three days will be all over the place depending on who ends up under storms and who doesn't. Today packs a threat for flash flooding across the eastern Plains where the NWS has issued a Flash Flood Watch for Morgan, Logan, Phillips, Sedwick and Washington counties through 3am Monday.

With PWAT values remaining high Monday storms will again be capable of producing flash flooding, but where that greatest threat ends up being will be a bit of a wait and see.

Today's WPC precipitation forecast calls for the greatest totals over far eastern Plains through hour 96, with some heavier totals along the Front Range as well. Some of the higher resolution models are a bit wetter for the metro areas than the large scale models, so we'll have to see how it all shakes out. If the NAM has a good handle on things, Monday afternoon could be very wet along the I-25 corridor. 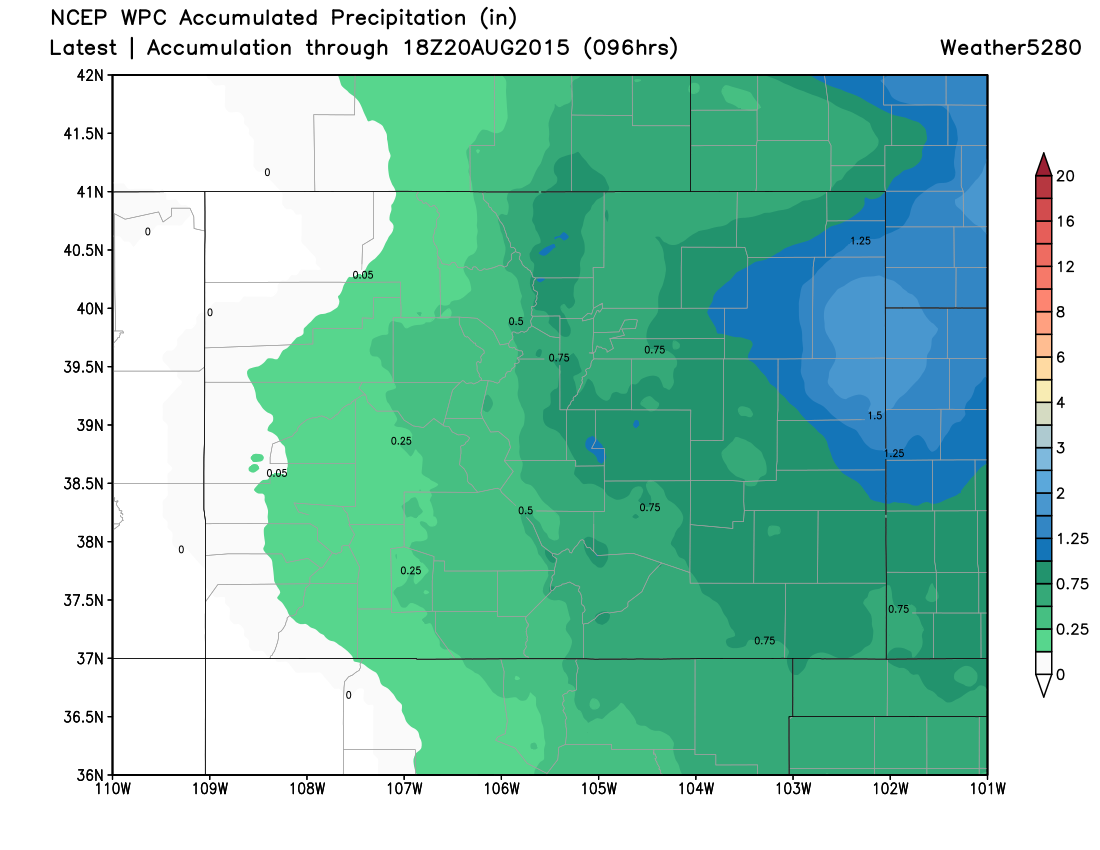 August chill?
The other big story of the week will be dramatically cooler temperatures by Tuesday and Wednesday, with highs in the 70s for Denver, and overnight lows possibly dipping into the 40s for some locations along the Front Range.

Remarkably, the GFS MOS guidance has a low of 48° Wednesday for Denver, and NAM MOS 46°. The record low for the date is 48° F, so we could certainly be flirting with that record if colder solutions verify.

The upper level trough responsible for these cooler temperatures is an impressive one for this time of year, and will swing through the northern tier of the United States through midweek before eventually ejecting northeast over the Great Lakes. 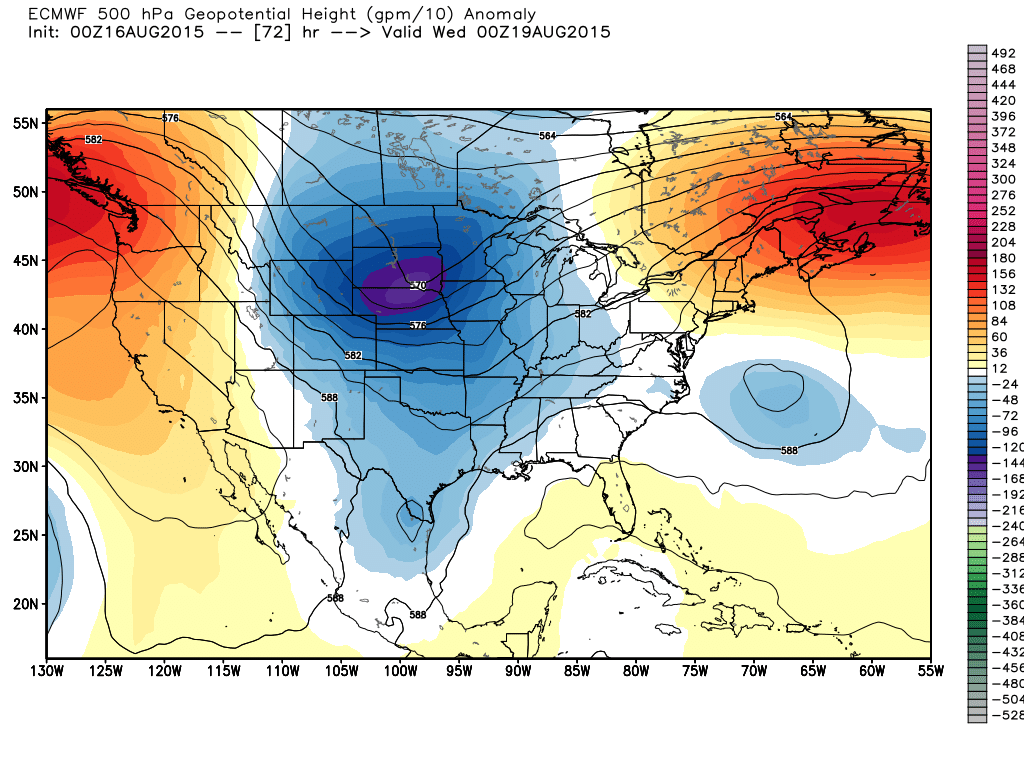 Temperatures behind the trough will run from 24 - 40° below normal for the northern Plains, with afternoon highs in Denver running 15 - 20° below normal Tuesday and Wednesday. In the animated GIF below, note the colder temperatures pooling across Montana and Wyoming, then diving south and east before moderating as the trough lifts northeast.

And the operational runs for Tuesday evening (left) and 18z Wednesday (right):

As for precipitation, Tuesday and Wednesday (while cooler) will also be drier than today and Monday. Some differences still remain in how fast this trough progresses, which may mean a slightly better chance for precipitation Tuesday, but overall the trend will be toward more subsidence and drying behind the passage of the front early Tuesday.

A longer look
There are a lot of interesting things going on in the weather as we head into the second half of August. The CFSv2 has the eastern U.S. getting progressively warmer as we head into September, and subsequently cools the west. While I think the east does warm up, I'm more skeptical of this pattern setting up too strongly and holding, and would actually hedge toward a bit cooler middle of the country for September, which better aligns with some of the analogs we are using.

In any case, a lot of conflicting signals out there, so plenty to watch. At the very least, I would hedge toward a more interesting second half of the month for Colorado than the first, beginning with a pretty active next 48 hours, then we'll see what we can get going beyond this week.

We'll have more on the longer range outlook in the coming days, and also give some thoughts on the 10 year anniversary of Katrina – which is quickly approaching. Finally, while the Atlantic tropics have been quiet this year, we are entering that point in the season that we'll need to watch for development, even in a year that has largely been non-existent.

Enjoy the reprieve from the heat, and subscribe to weather5280 for all the latest.