What's Denver's Weather Like in September? Climate Normals and Extremes

Is September the perfect month in Colorado? Quite possibly. While known for its warm sunny days and cool crisp nights, September can feature just about every type of weather as well – from severe storms, to heavy snow, to extreme flooding. September 1st marks the start of meteorological fall, and thus kicks of a season of change across the state.

Temperatures
In September, we see a 12° temperature drop in the average high from the first day to the last day of the month. Denver starts the month with an average high of 84° F, but ends the month at a (dare I say) near-perfect 72° F average high. The city's overnight lows also fall off dramatically, with the average low dropping from 54° to start the month, to a chilly 42° by the 30th.

September isn't known for its heat, but it certainly can get hot, especially in the first week or two of the month. The month's record high of 97° has been reached six times since 1872 – most recently on September 5th and 6th, 2013. The record coldest temperature for the month occurred on September 29, 1985, when the mercury dropped to 17° F in Denver. 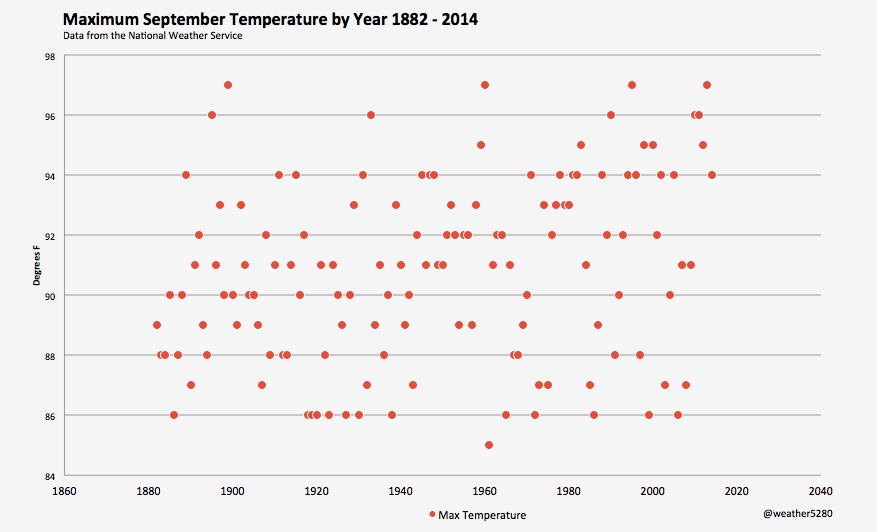 Snowfall statistics
September is considered the first month of Denver's "snow season", averaging 1.3" of snow from 1981 to 2010. While no snow has been recorded in August in Denver, the earliest snowfall on record came just a few short days into the month of September, occurring September 3rd, 1961.

Many Septembers record no snow at all, however, with 85 of them in the last 133 years of record-keeping recording no snow at all. Since 2000, for example, Denver has only seen one September with measurable snowfall, and one year (2014) with a Trace of snowfall. That one year with measurable snowfall was way back in 2000, when 0.2" of snow was recorded at Denver International Airport. The two decades prior, however, were a completely different story, with eight of the 20 Septembers recording snow. 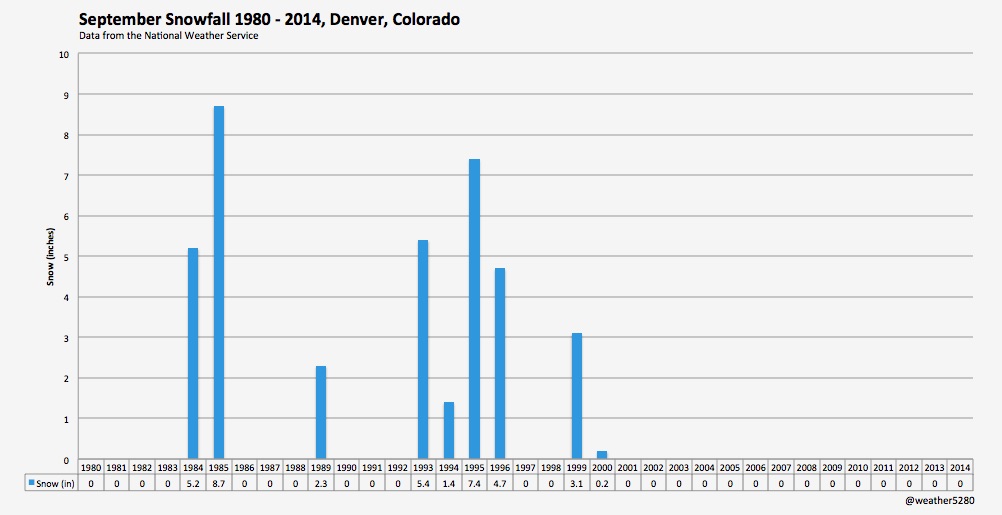 Most September snowfalls are just a few slushy inches, as the ground is still very warm, and systems this time of year aren't typically packing winter cold. That said, there have been a few notable September storms that have brought very heavy, damaging snow to the city. The greatest 24 snowfall total for the month occurred in 1936 when 16.5" of snow fell between the 27th and 28th of the month. Here are the top 10 snowiest Septembers, with 1971 taking the cake recording 17.2" of snow: 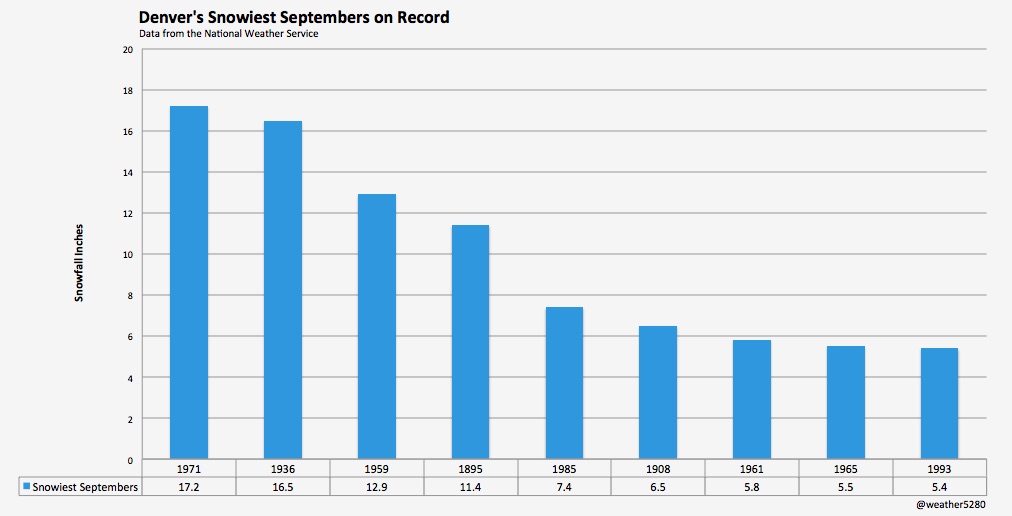 Normal, however, isn't always the case. September in Colorado is still susceptible to influences of a fading monsoon, and can sometimes see heavy rain (and snow) from remnants of tropical storms in the eastern Pacific.

In September of 2013 the Front Range saw catastrophic flooding, with 17.24" of rain falling in Boulder over just eight days. Denver recorded its wettest September on record too, with 5.61" tallied at Denver International Airport. Despite officially recording much less rain than many of the metro areas saw, the city still broke the old record set back in 1961 by nearly 1". 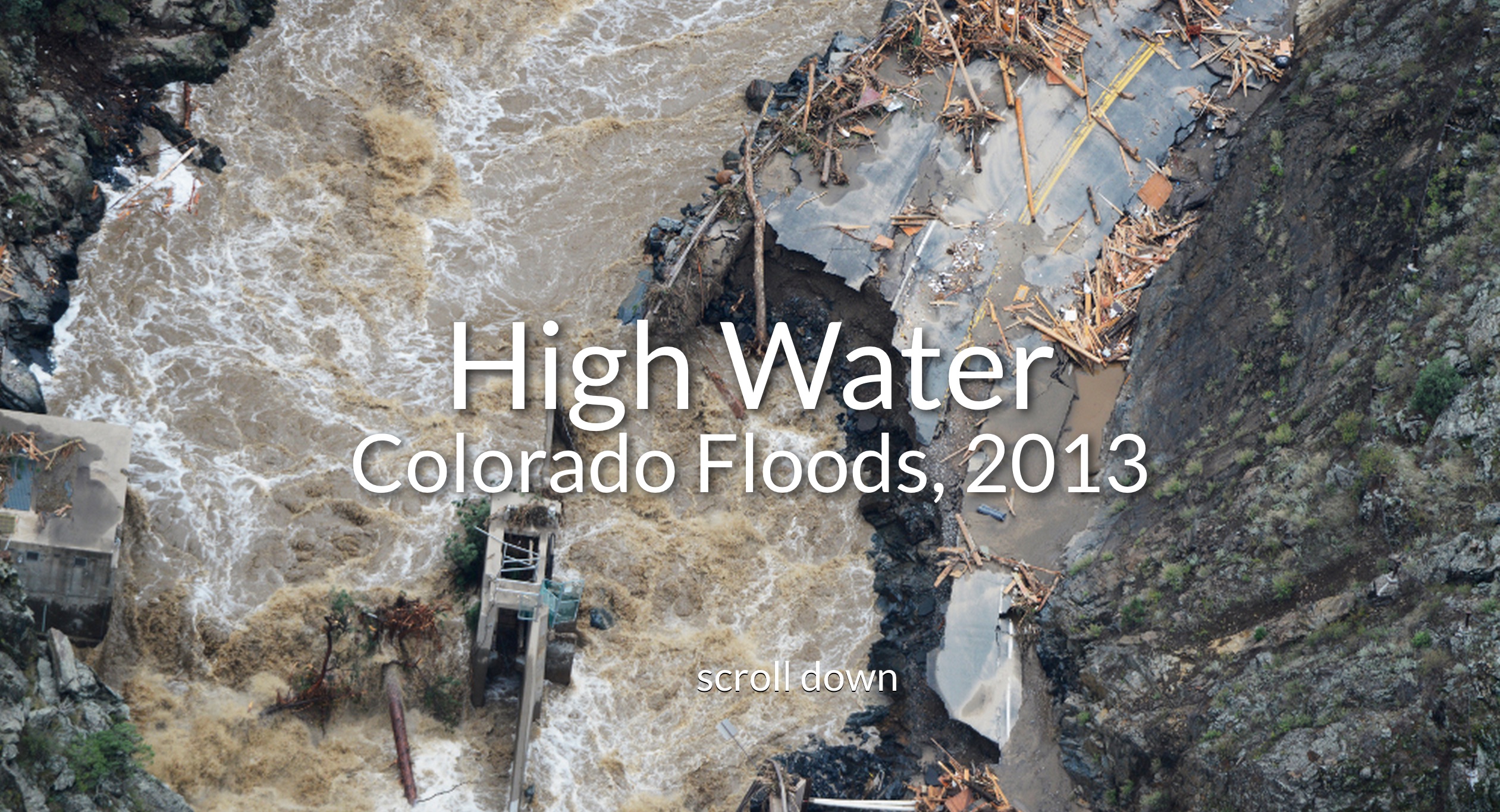 Despite the full wrath of Mother Nature the month is capable of producing, September days are more typically associated with being warm and tranquil, with hints of fall chill at night. During the second half of the month the leaves really start to change in ernest in the high country as well. If you have the opportunity, head to the hills in the coming weeks, before the snow and cold begins to set in for the winter!