A Few Comments on Next Week's System

Just a quick post this evening with some thoughts about next week. Yes, the models (at times) are going bananas with snow, but you know the old saying: don't put the sleigh before the snowstorm. Or something like that...

First of all, it's great to see this system showing up, despite the inconsistencies. We've been saying three things for several weeks now: the first being that the storm track would get active and remain active at least through mid November, the second that with each progressive week the systems would get slower (and snowier), and the third being that we liked something in the 17th to 20th range. Additionally, a big storm in either October or November would fit the analogs we've been using for several months now.

What's becoming evident is that someone is likely to get hit with a lot of snow next week, but what's not yet clear is exactly who and to a certain extent exactly when. The target area, if you will, is from northern New Mexico into the Texas panhandle, western Kansas, Eastern Colorado and north into southeast Wyoming and western Nebraska. Models appear to be favoring on of two scenarios: a classic eastern Colorado dumping, or a Texas panhandle/western Kansas wallop. Depends on the model, depends on the day, depends on the run.

Unlike when people Tweeted out the one run the EURO deterministic model had with 30" of snow for Denver for this past week's storm, there's a bit more support in the modeling for this event this go around. All the global models have shown it (though some lose it every once and while too), and their ensembles are much more intriguing than in recent weeks too. Here's the latest GFS (left) and GEM (right) 500mb ensembles for early next week, a big old trough plowing into the west, closing off, and pushing east:

Now, these would yield two different results, but the point is they both have the trough, and it's a mean looking one. The EURO ensembles are actually less impressive looking, and appear to be trying to split the energy a bit more + are a bit faster with the southern trough, but, for KDEN the ensemble mean for snow is actually greater than its deterministic for maybe the first time this season, so that's something. Maybe?

There will be a lot to watch over the next several days. As Bledsoe pointed out on Twitter earlier this afternoon, models are literally forecasting anywhere from 0 - 24" of snow across eastern Colorado by the middle of next week, so please resist the urge to hang your cap on any single run at this point. What looks likely is some snowfall event in the region, but where that ends up is really a crapshoot at this point. My gut says that if this thing is going to miss it'll miss because it digs too far south then east for us. The split showing up in the EURO ensembles is a bit concerning.

Just for fun (it's Thursday and there's no weather) take a look at this sampling of GFS snowfall forecasts for next week. The first from Nov 10th goes nutso for Denver, the second, from last night is similar, but for the most part spares Denver, the third from 18z this afternoon shows basically nothing for Denver, and well.. socks western Kansas. Fun to watch, but a great example of why we (mets) should resist the urge to share a single run of this models... HUGE variations every 6 hours. 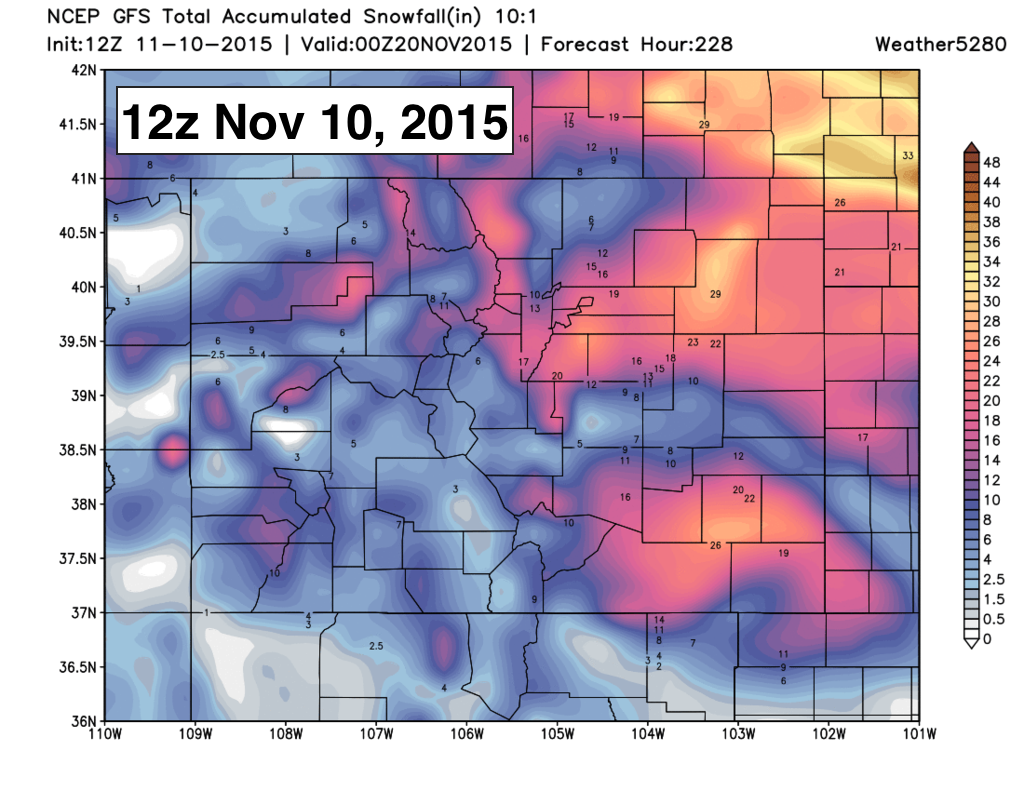 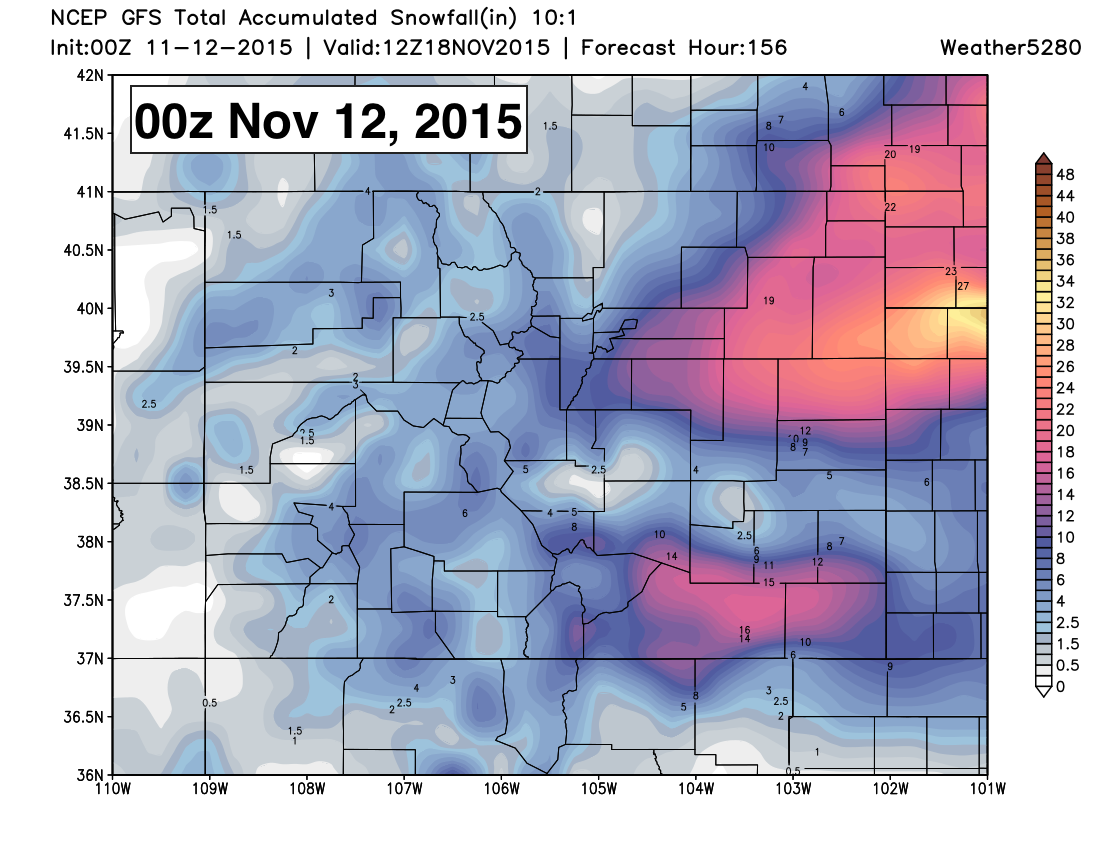 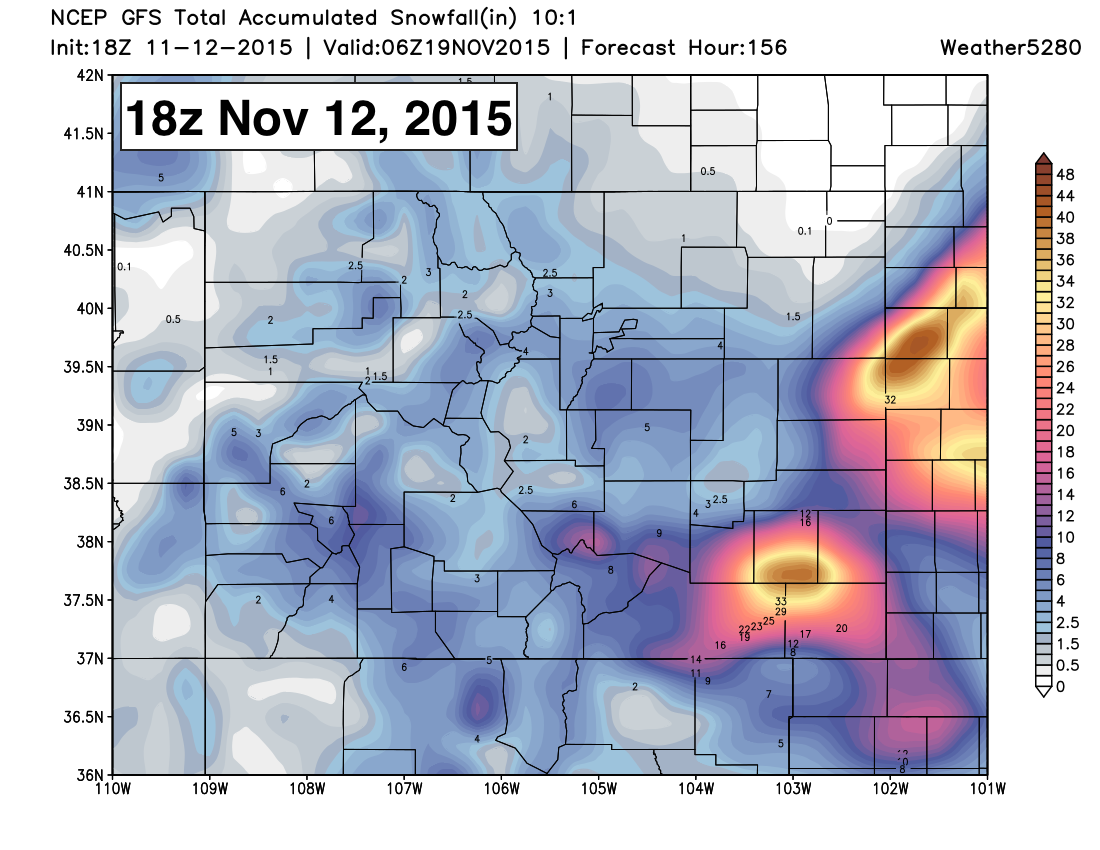 Maybe it's a trend east with the heaviest snow today? The 12z GEM would disagree.

Lots of fun to be had, stay tuned!