Forecast Bust is a Snow-Lover's Boom!

Northeast Colorado buried in snow as winter storm slams region
As kids – and even still for some of us adults – there was a hope with every storm that it would over-perform well past what forecasters were predicting. It seemed to hardly ever happen; more often storms would under-deliver than over-deliver. Every once and a while though, staying up all night would finally pay off, with snow piling higher than one could have ever imagined.

As forecasters, these are also the storms that keep us up at night. Not only because the excitement, all these years later, still drives us past the point of exhaustion, but also because the stress and responsibility in issuing the best forecast possible for the public weighs heavy. It can be truly conflicting to issue a forecast, not want to be wrong, but at the same time watch what happened last night and not be excited to see your forecast go out the window. If you're going to bust on a snowfall forecast, this is the way to do it. Way better than the 6 - 12" storm that yields a dusting of snow.

We hope that in recent days we stressed the impact this storm was capable of producing. Travel today across northeast Colorado is in fact treacherous, not only because of the deeper than forecast snow, but also the very well forecast high wind, reduced visibility, and continued snowfall. While we resisted the urge to bump snowfall totals twofold (threefold?) at the last minute last night, we hope you read our update suggesting this over-performer was a real possibility. We could have upped our totals to 5 - 10" last night, though at that point it hardly would have been a forecast. The National Weather Service in Boulder made the correct decision late yesterday evening to issue a Winter Storm Warning as it became clear this storm meant business. For us, it made more sense to concede we’d likely end up (well) low with our forecast totals, but avoid making dramatic changes as the snow began to fall. We’ll take the bust (or boom!), and carry on.

We hope all of you proud owners of our Weather5280 shirt were wearing it this morning, as conditions overnight were exactly what the shirt was modeled after!

So, what happened?
Short-range hi-res models have struggled of late, but last night in combination with solid initialization they correctly latched onto this being a high-impact event. The GFS never really caught on (even at 15:1 snow ratios), and was too progressive with the upper-level low, while the 00z ECMWF finally jumped on board with more significant totals in the end.

The long and the short of what happened may simply boil down to the system evolving into a deeper cutoff low than modeling had forecast, and thus slowing long enough and dipping a bit further south than anticipated for a prolonged heavy snowfall event. When things align just right, we know how incredibly efficient snowmaking can be across northeast Colorado and along the Front Range, particularly when temperatures are in the low 20s.

Below is a comparison between the 00Z run of the GFS on December 15 for 12Z on December 15, and the observed 12Z analysis. Notice how the GFS was more progressive with the upper-level low (top) than what happened in actuality (bottom). The Denver metro area was also located in the exit region of a cyclonically-curved (counterclockwise) jet-streak. This infers that we were in a favorable spot for upper-level divergence, thus leading to enhanced upward vertical motion, and ultimately the formation of clouds and precipitation. 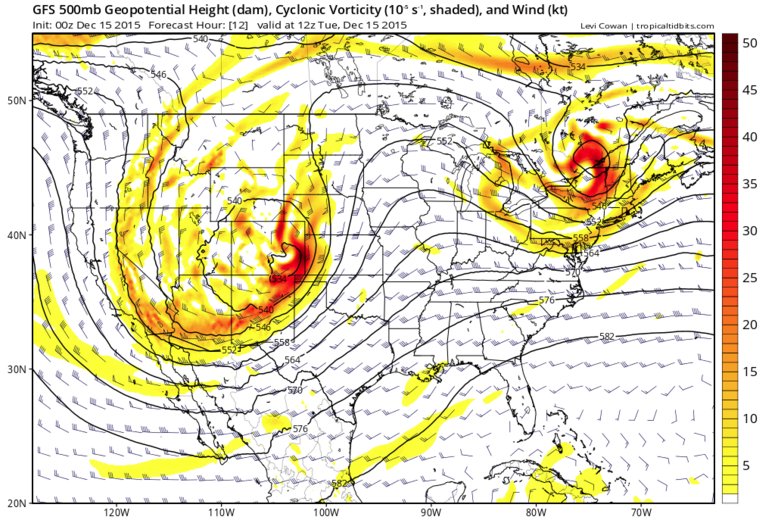 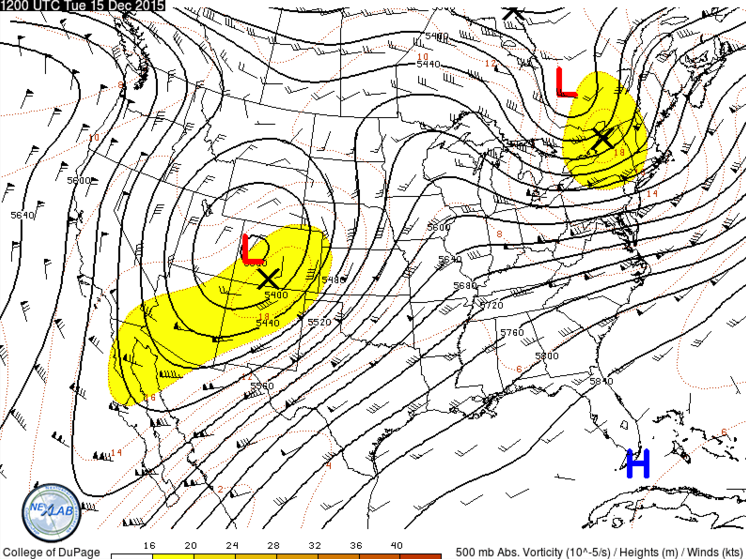 After looking at the 12Z observed sounding today for KDEN, we can see that the moist layer extends up to around 600 mb. The north/northeasterly upslope was also fairly deep. This profile is also conducive to the formation of dendrites, which increases the snow-liquid ratio. To maximize dendritic growth, you want the -13° to -17°C layer to be fairly deep and saturated. The shaded blue area on the temperature profile denotes the dendritic growth zone.

Looking at the vertical wind profile, we can see that winds are northeasterly near the surface, backing to northerly up to around 600 mb. This counterclockwise turning, or “backing” of the winds with height, implies cold air advection within this layer extending from the surface to 600 mb. 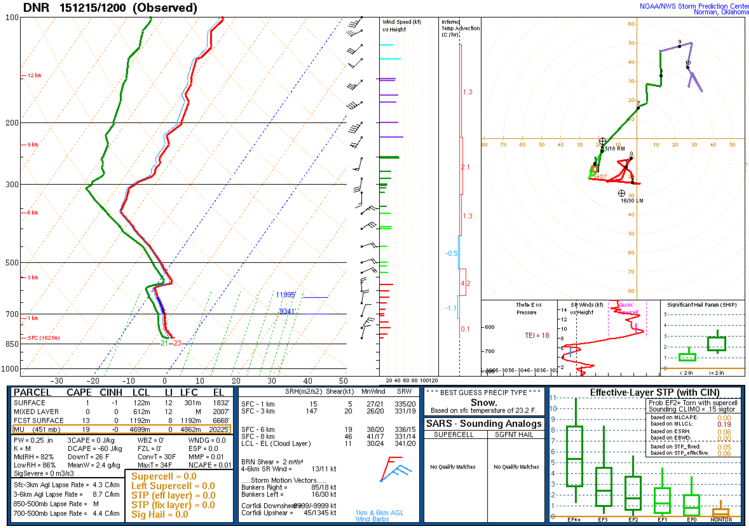 Below is a water vapor image from 16Z (9 AM MST). The brighter shades implies greater moisture content in the mid and upper levels of the atmosphere. Areas of lift can also be seen in the bright, solid white regions. A quintessential dry slot can be seen further east into Kansas denoting subsidence. 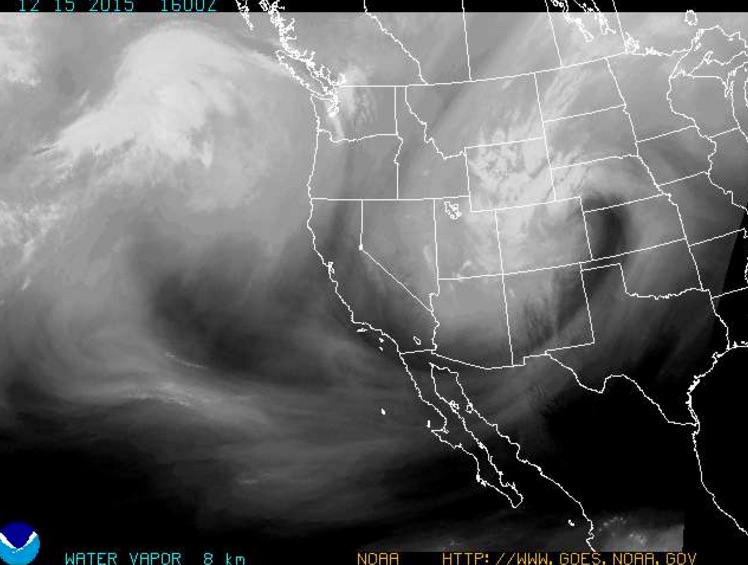 The 12Z surface analysis shows how the Denver Metro was in a favorable spot for upslope. The cyclonic circulation around the surface low resulted in northerly and northeasterly flow, forcing this air up the foothills and Palmer Divide.

In short, the ingredients that are necessary for an impactful winter storm came together, with Denver being in a favorable location. The jet streak dynamics were in place, giving us an enhanced source of lift, along with the position of the low giving us deep upslope. In addition, the system was not as progressive (read: fast) as the models showed initially, which gave us a longer duration event. In retrospect, we maybe should have better anticipated the deepening of the low given how 'stout' the ridging is in the east. Unlike the systems that we saw earlier in the season, temperature was no longer an issue with this storm. This resulted in a higher snow-liquid ratio than we've seen this season, which we calculated to be roughly 15:1 to 17.5:1 depending on your location – fairly typical for the region during winter.

Snowfall totals
Totals across northeast Colorado range from 6 to 14", with drifts of two feet making accurate measurements difficult. At our station, which is located 2 miles south of downtown Denver, we recorded 10.25” of snow through midday. Denver International Airport, where Denver’s official weather records are kept, recorded a storm total of 6.7” of snow as of 11am (number likely will go up a bit when final report is made).

Our forecast was low virtually everywhere, so pick your favorite location to highlight the bust. The biggest differential likely came in Perry Park (southwest of Denver) where upwards of 17” was recorded by midday. We’ve got a list of other totals, their forecasts (as of yesterday afternoon, not considering last night’s update), highlighting just how much this storm over-performed.

Northeast Colorado isn’t the only place seeing good snow in Colorado. After a slow start to the month the mountains have seen great snow over the last week, with an additional 1 to 2’ of snow falling over the last 24 hours. FreshyMap is looking oh-so-good today with fresh powder for all the resorts. 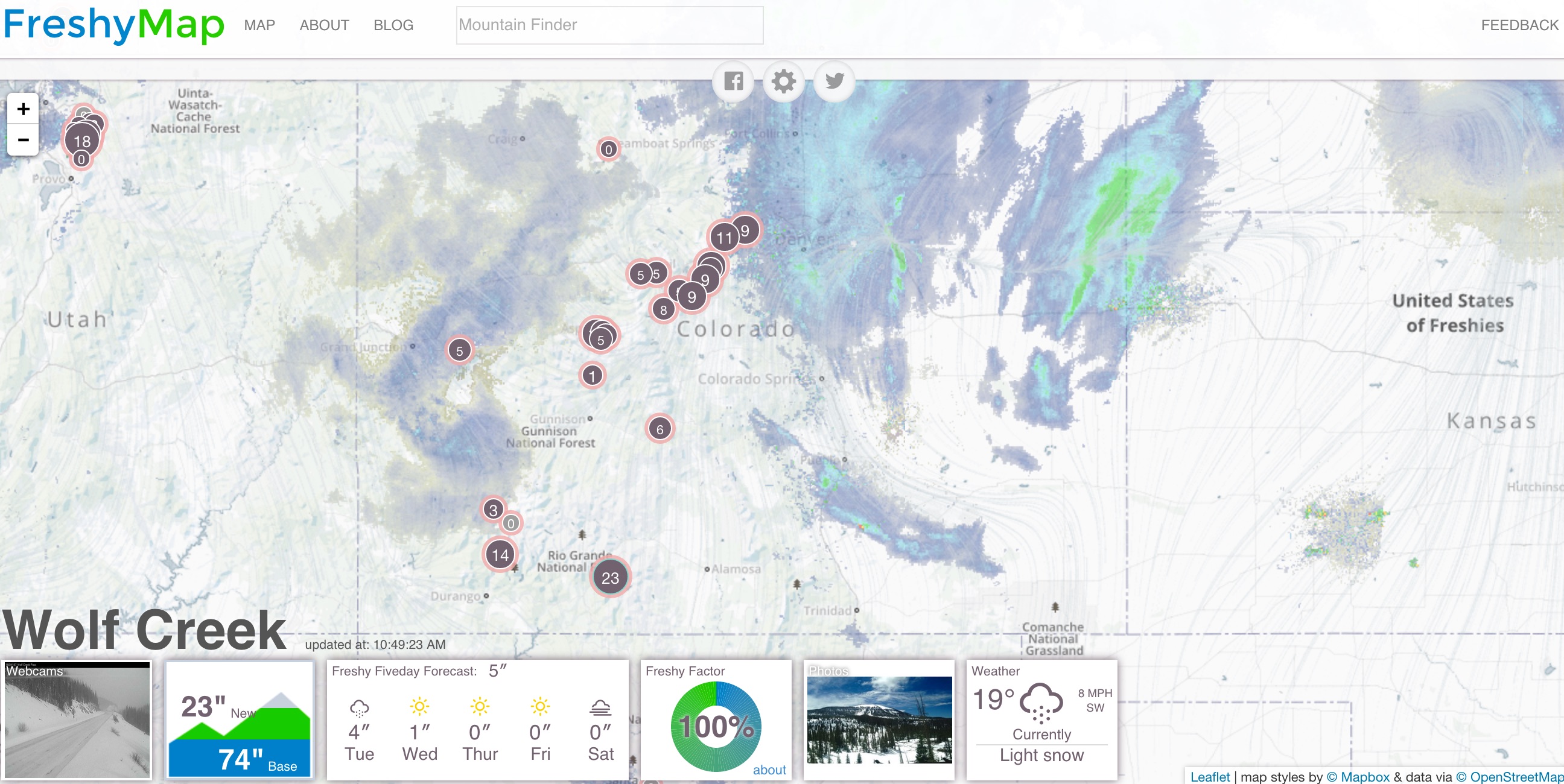 And here is a map of storm reports to the National Weather Service for northeast Colorado (we'll continue to update as more totals come in):


There will be many takeaways from this system, not the least of which being that snowstorms are notoriously difficult to forecast for the Front Range. We’ve had a pretty good stretch going [extending back into last season](/tag/snowfall-totals/), but this system did a pretty good number to that streak. As we said last night, it’s been a long time since we’ve had a true over-performer, so we’ll happily take the bust and enjoy the fresh snow heading into the holidays!

We’ll see some melting over the next few days as the sun returns, but not much at least until the end of the week. Temperatures will remain near and below freezing through Thursday, with another reinforcing shot of cold air Thursday, with scattered snow showers possible.

Many of you already left your snowfall reports here, but we’d love to see more! Share your reports and photos in the comments below.

We'll leave you with this image graciously shared with us from Larry Pierce of the fresh snow in Steamboat today. Winter in Colorado doesn't get much better than today. 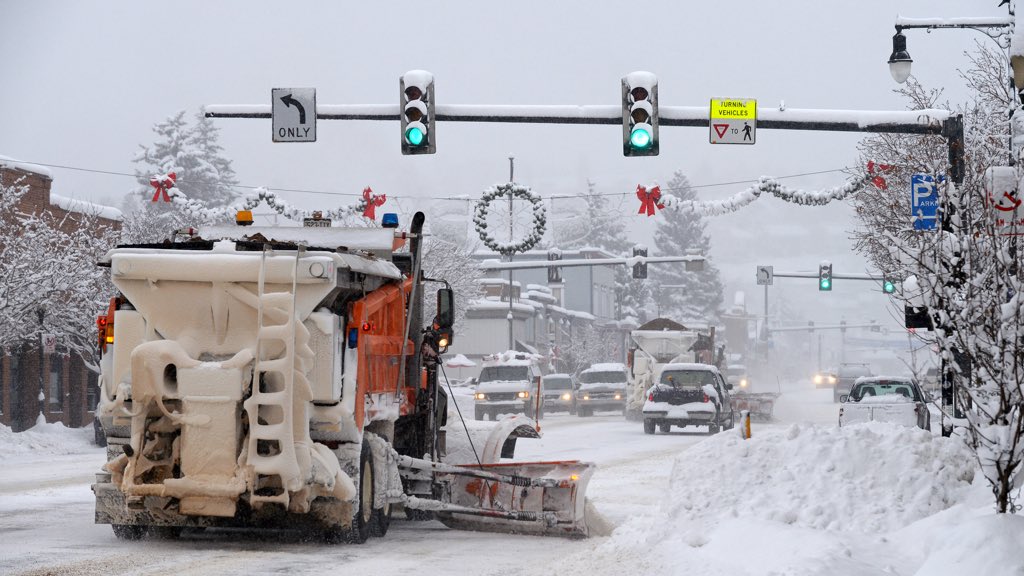 Collaborative post from @brendansweather, @FroahDaMan and the entire @weather5280 team.