The Christmas countdown continues. Some of you may be measuring your advent calendars with a snow chance countdown. Well, unless you are in the mountains your countdown can probably stop at one more chance. The city isn't likely to see snow now through Christmas Eve, but may see snow falling on Christmas Day.

In any given year, odds are actually against a Denver white Christmas, both in terms of snow on the ground and active snow showers. This from the NWS Boulder office.

If having a white Christmas means having one inch of more of snow on the ground on Christmas Day, then the chances are about 38 percent (44 days in 115 years since snow depth measurements began in 1900).

On the other hand, if a white Christmas means having measurable snowfall (0.1 inch or more) on Christmas Day, then the odds drop to about 14 percent (19 days in 133 years since snowfall measurement began in 1882).

Historically our snow chances for Christmas come down to timing, usually hitting the dry part of the flow. This year, maybe the timing will be a bit different. Let's take a look...

The pattern remains progressive and shallow, at least through mid week. Meaning, the troughs that are to come through are moving quickly and are not strong. This was the case with the quick moving trough that passed overhead during the Bronco Game. Did you notice it? Probably not outside of a few rain and snow showers drifting across the Front Range. This pattern also leads to a lack of truly cold air, thus don't expect much of a cold snap to hit soon.

The teleconnections do not indicate a change other than to shift the storm track to a more northwesterly one by the end of the month – indicated by the top left panel. 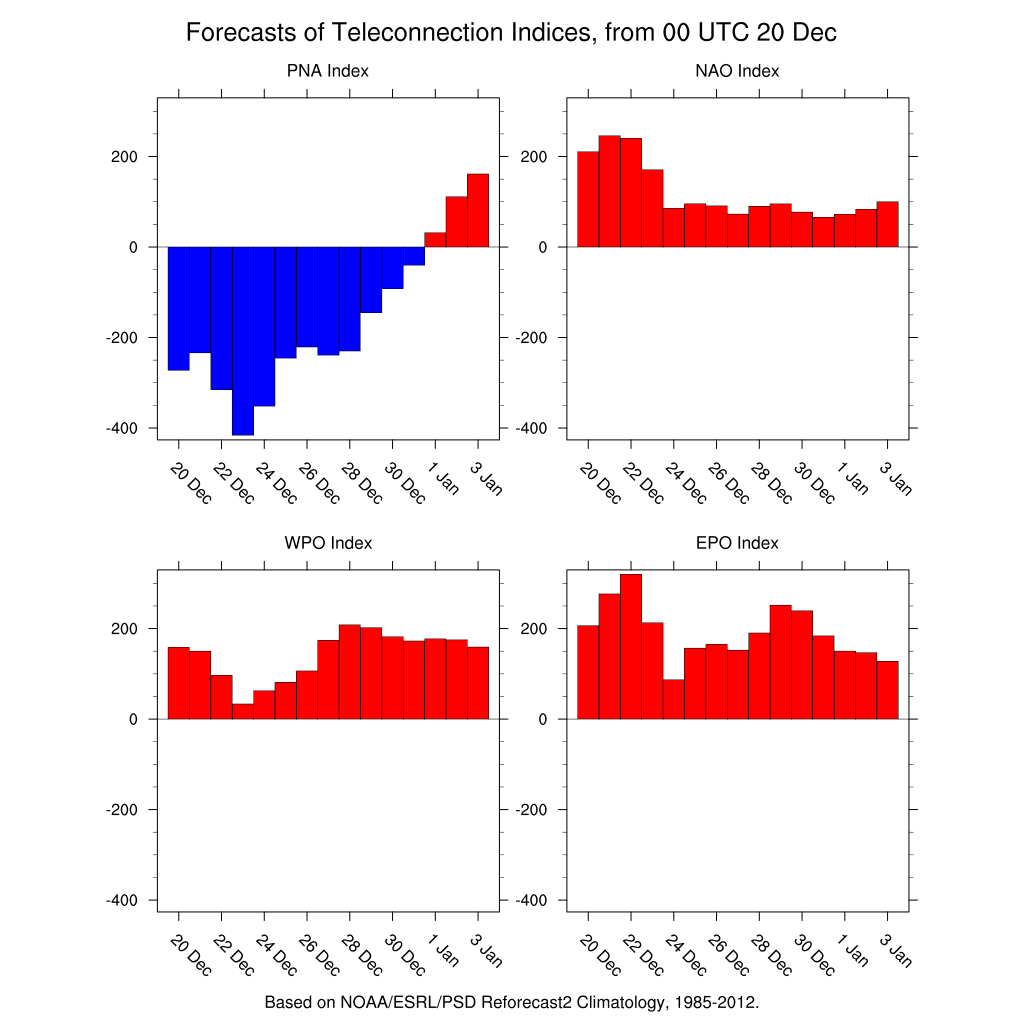 As the PNA index values become positive the storm track becomes northwesterly for the state.

That doesn't mean a dry and hot forecast. It does imply a drier than average pattern for the plains and Front Range. The question is will we see another system or two come through before the PNA potentially heads positive? With a shifting northwesterly storm track our temperatures are likely to remain around to below average.

With that said, expect a week of temperatures in the 30s and 40s through Christmas Day. The week will be mostly quiet, too. That is until the next system moves over the state late in the week and next weekend.

The west facing mountain ranges love a storm track like what we are about to go through. Skiers and riders will have daily chances for fresh powder, really piling up through the end of the week. Here is the GFS forecast for snowfall by Christmas night - impressive for the ski areas: 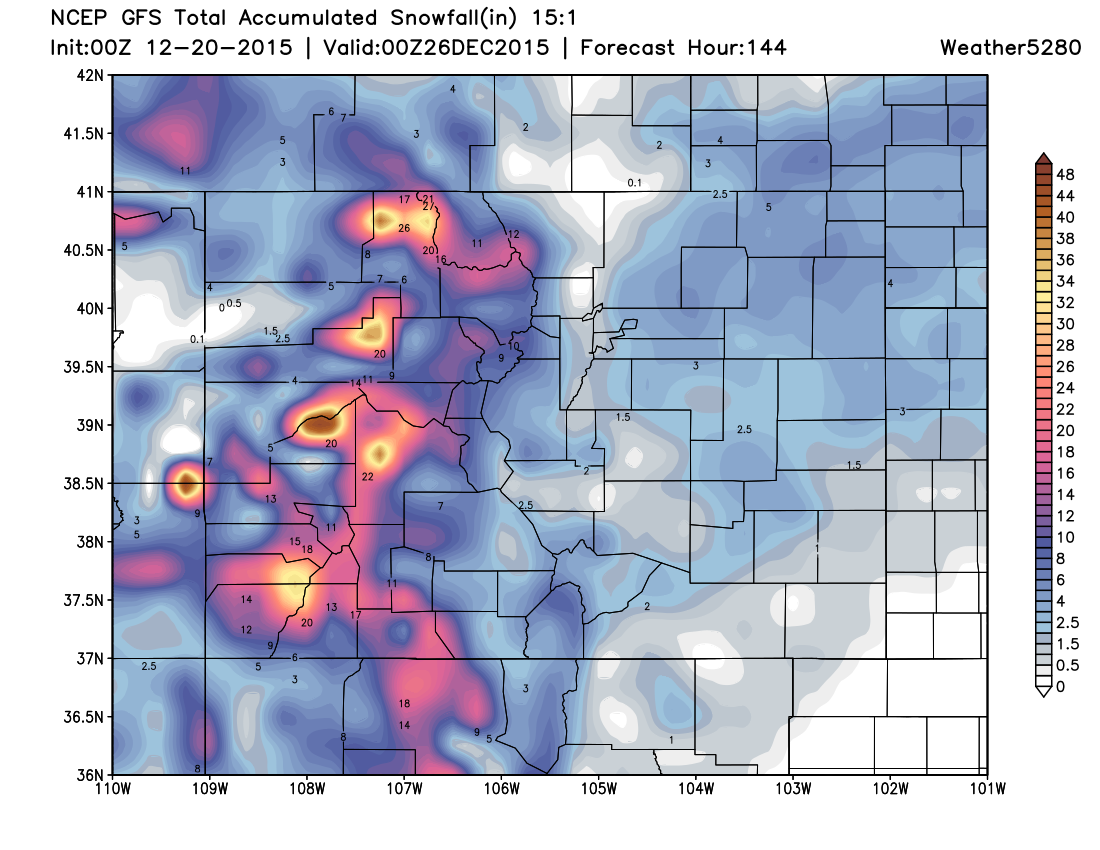 You can cycle through the snowfall forecast to see 6-hourly accumulations throughout the week if you check out our models page.

If you do cycle through the modeling you see a chance for snowfall is timing out to move over the city Christmas Day. As shown above, at this time the GFS projection shows the chance for some accumulation. Again not major, but could be well timed for Bing Crosby and others dreaming of a white Christmas. This, of course, is something we will discuss more thoroughly later in the week. In the meantime, ski resorts are grinning ear-to-ear with the forecast for the week.

As for details surrounding the system to end the week and next weekend... we'll refrain from going too deep into a forecast just yet. Simply put, there's almost no consensus between the models, their ensembles, and even themselves run-to-run. At times the operational models are dumping heavy snow across eastern Colorado, only to be be dry the following run. There are basically three scenarios... 1) it completely cuts off and dives extremely far south by the weekend, 2) it comes across as an elongated open wave (as today's 12z GFS suggests), or 3) becomes a bit more consolidated, but hangs onto a more northern storm track, diverted north by persistent ridging to the east. A few of those solutions would mean a good chance of snow across eastern Colorado by the weekend... while any other combination would mean basically nothing. 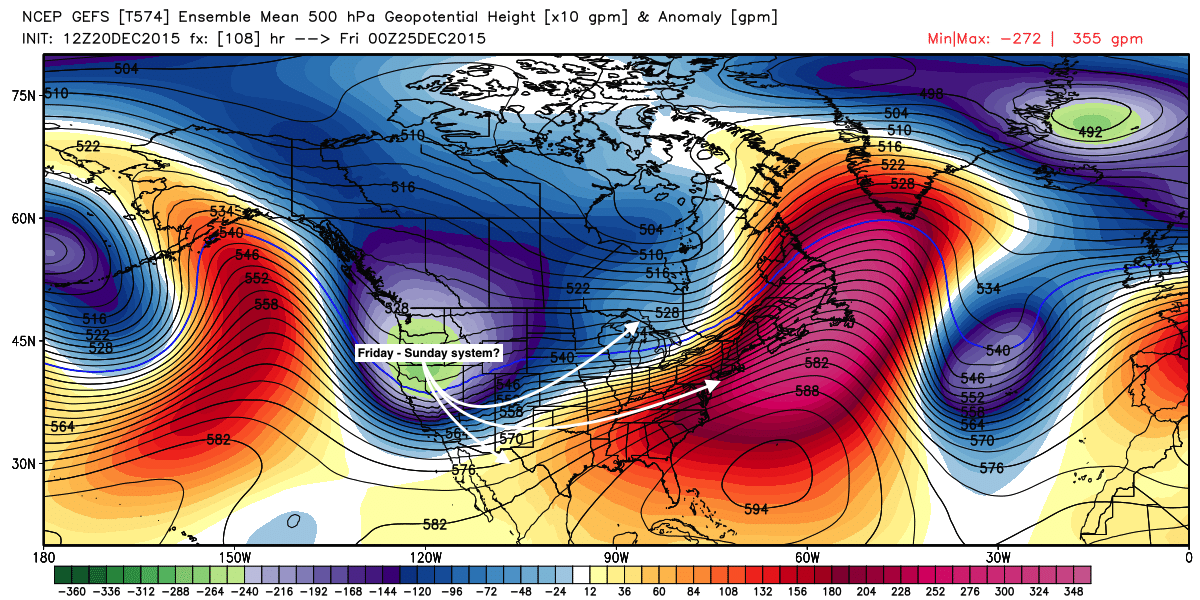 To end last week there was great agreement between the GFS/GEM/ECM ensembles to pull this thing way south... today there's less agreement, and ensembles are generally looking more progressive with this system than slower. Today, modeling is just a mess – the 12z ECM produces a good snow for eastern Colorado, while it dives the ULL into north Texas, WAY too far south to support so much snow. Given the PNA and Niño, the most likely solution is this thing ends up digging too far south for anything appreciable across northeast Colorado. So, needless to say but, plenty to watch over the coming days... so stick with us through the week for updates.

For a broader perspective on the current season, and the spring/summer outlook, you should check out the most recent posting by Brian Bledsoe. It discusses the weakening of El Nino and a return of La Nina, that could mean an active winter and spring.