It's hard to believe that this will be the last State of the Atmosphere of the year. We hope you all had a wonderful Christmas and enjoyed the beautiful snowfall Friday across the northern urban corridor and northeast Plains. We recorded 1.8" of snow at our station just south of Downtown, with 2.3" of snow at Denver International Airport. Here are the 24 hour snowfall totals ending yesterday Morning: 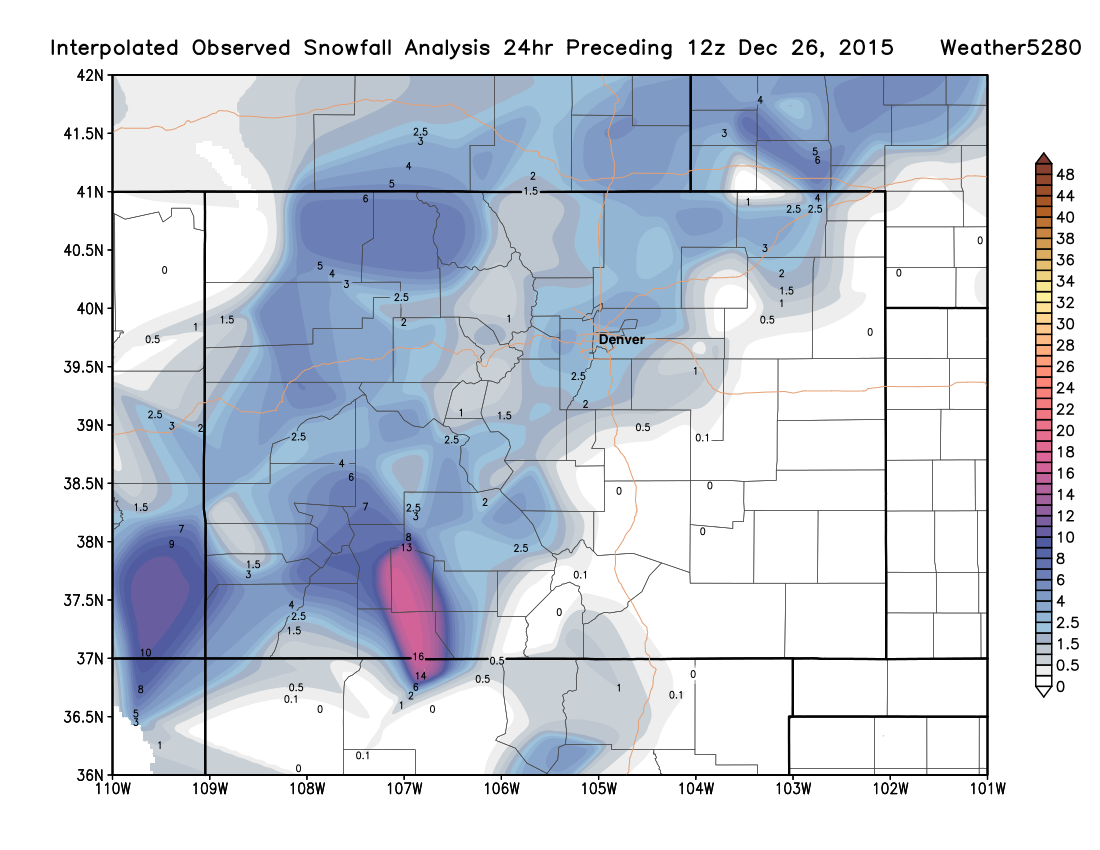 Through today, Denver has recorded 11.3" of snow in December, several inches above the 8.1" normal for the month. This puts the city's season-to-date snowfall at 22.6" officially, which is 1.8" above normal to end December. While some light snow is possible Tuesday, these (in all likelihood) will be the final snowfall tallies for the month, or close to.

A quieting pattern
What has been a very active second half of December for the western United States will end the last days of the year very quietly. Some lingering winter weather advisories across portions of the west today, but otherwise the extreme weather has moved into the middle of the country, with winter weather alerts from New Mexico and Texas to the Great Lakes and Maine. In the warm sector, another round of severe storms and flooding will be likely Sunday and Monday as this system gradually moves east.

Take a look at the active warning map from the National Weather Service as of noon Sunday. For Texas it's blizzard warnings in the west, and tornado watches in the east, and just about every type of weather in between. For Colorado, all active weather alerts have expired: 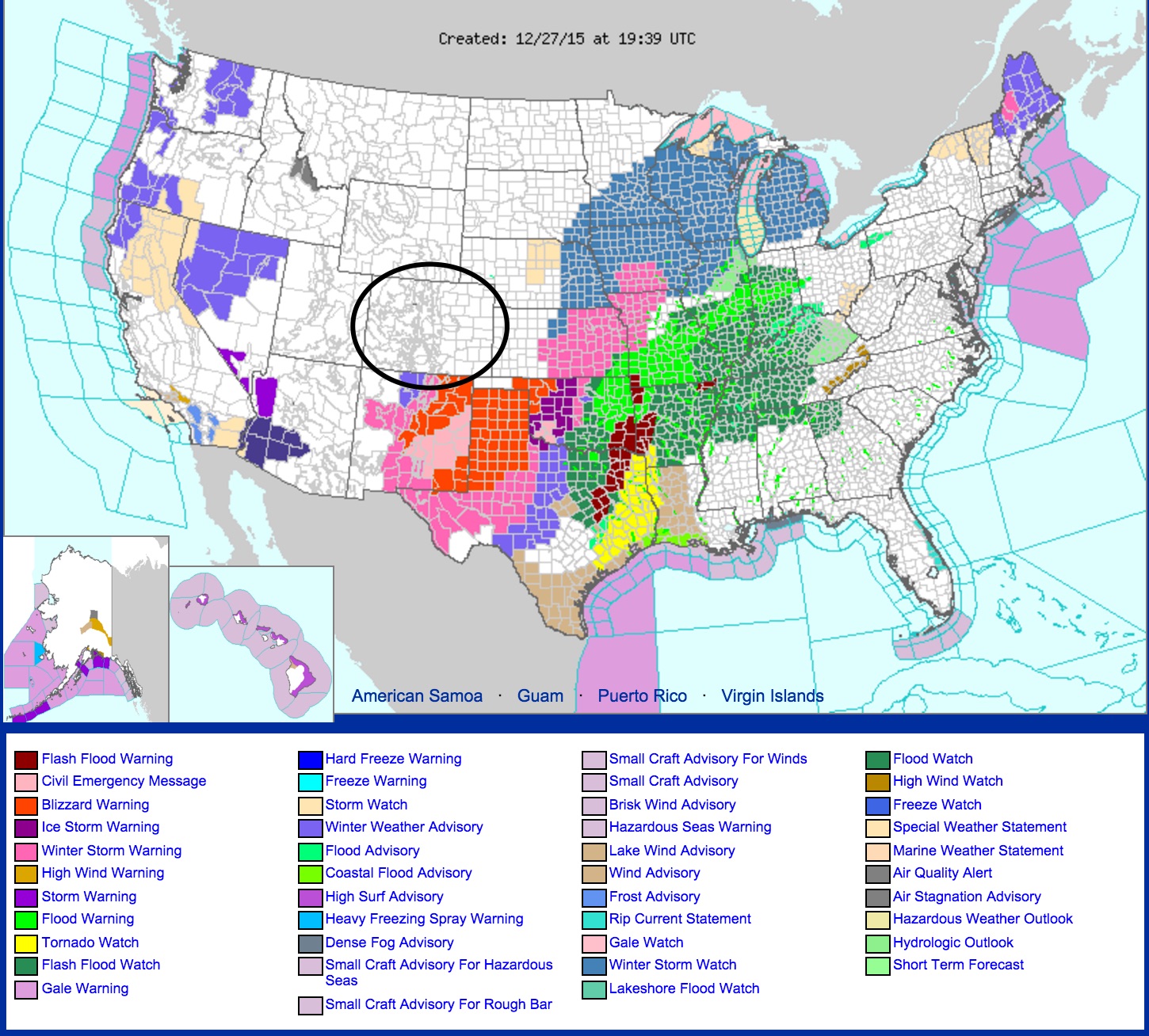 This is all tied to this big cutoff low we were tracking last week, which is now digging tracking along the U.S./Mexico border, before turning northeast tonight. 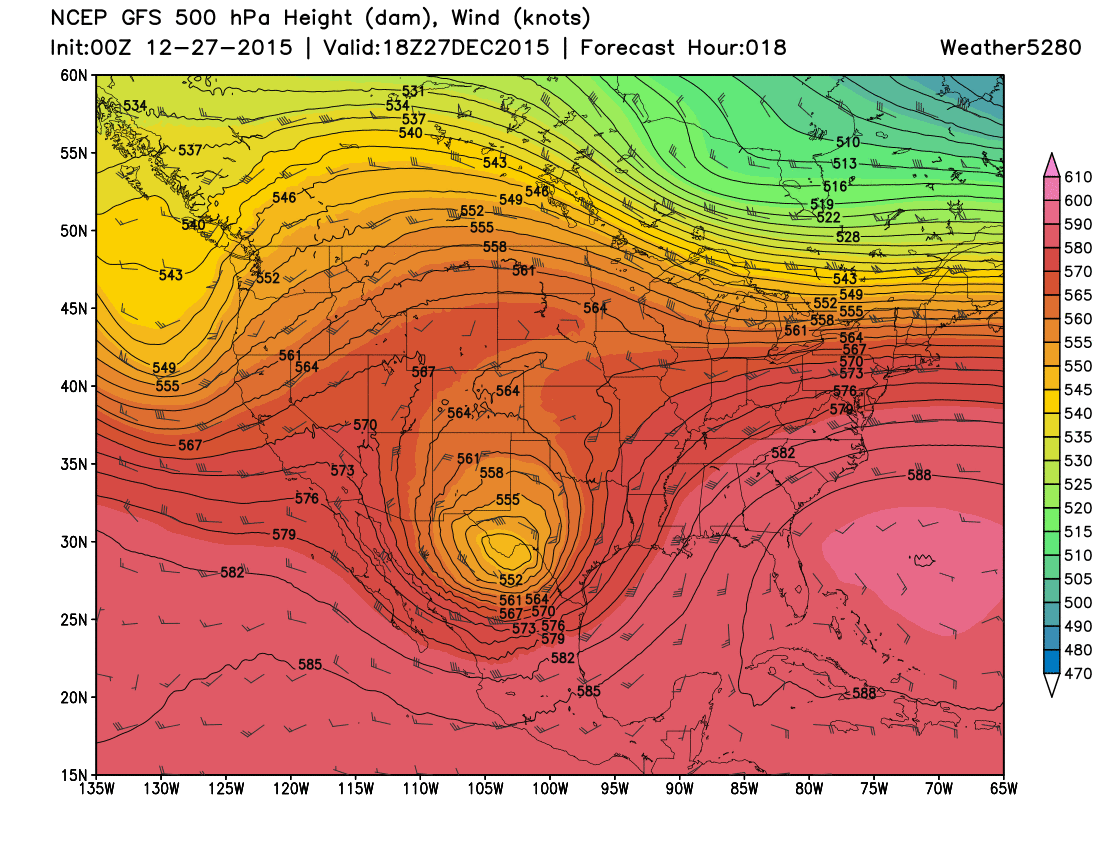 For Colorado this system was a miss. So while portions of New Mexico, west Texas, Oklahoma, and Kansas see heavy snow and blizzard conditions to end the weekend, our weather has turned cold but quiet across the state. The quieter pattern which has settled in to end the weekend will stick with us for awhile now.

The week ahead
The main story for the next week will be the continued cold across Colorado, with off and on light snow for the mountains, but only small snow chances at lower elevations.

A quick look at the 12z GFS snowfall forecast (assuming 15:1) shows this, spotty mountain snow, and maybe a bit of light snow for Denver and the Palmer Ridge. 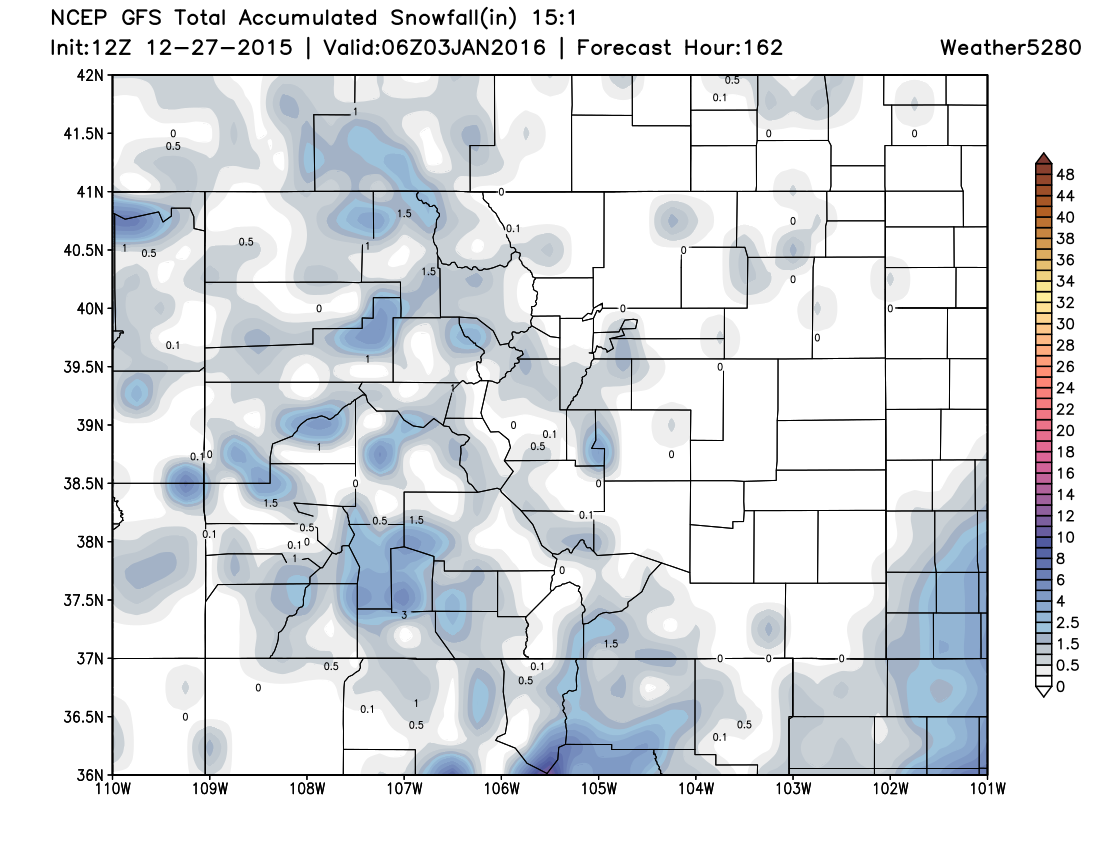 Meanwhile, temperatures will just be cold through most of the week. We'll see a reinforcing show of cold air Tuesday, and possibly again late in the week before temperatures begin to moderate by next weekend. Highs each day in the 20s for Denver will be likely, with overnight lows in the single digits most nights. Tuesday looks to be the coldest day of the week, with highs near 20 degrees, and a slight chance for light snow by the evening: 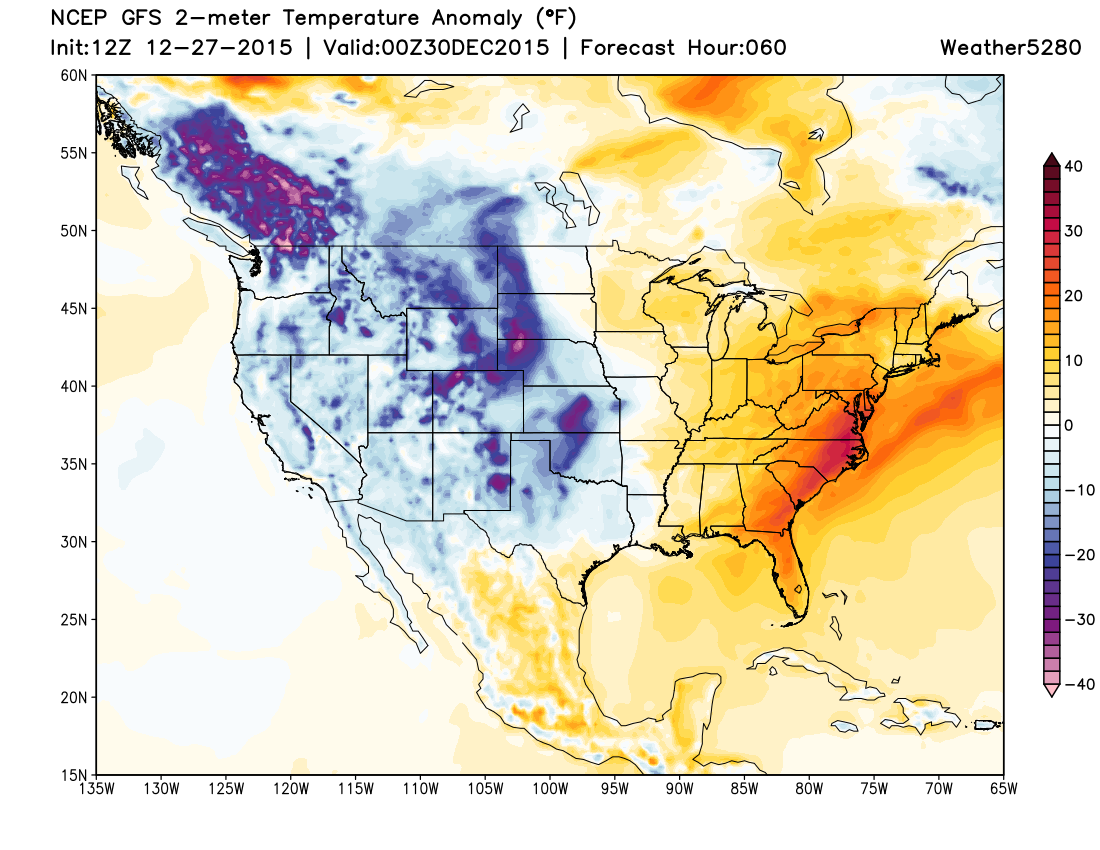 Eventually those cooler temperatures will work their way east as well. By January 1st, 2016 most of the country will be experiencing temperatures below normal, something we haven't seen in some time: 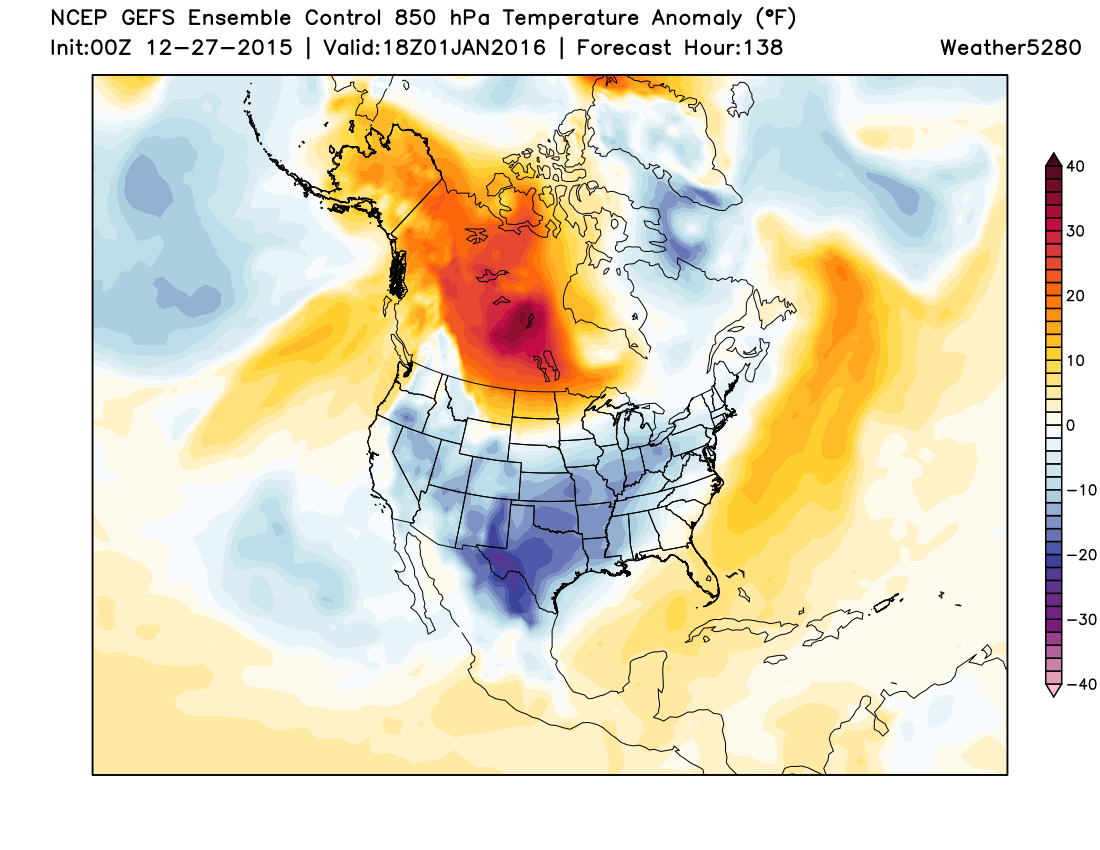 As we get deeper into the period, a split flow pattern develops and will work to keep much of the west quiet for some time. Really, once this system underway today clears, there will be a period of quieter weather nationally. We'll see ridging develop in the northwest this week and maintain so through the first few days of January as it looks right now, before possibly breaking down by the middle of the first week of January. This pattern will mean the east will finally remember it's not summertime, but may not supply any big winter wallops that way either. With a split flow, will need to keep an eye on the southern storm track, but as of now after this system clears, models really aren't picking up on a hold lot through the weekend.