It is Stock Show time y'all so where is the continued arctic cold and ice?

Well, we seem to have the ice part taken care of in most areas. However, the cold was here and now departs. From here we warm-up for most of the week, and melt some of that ice. That is, until another system arrives by the end of the week. This next system - at this time - doesn't appear to be quite as strong as the one from last week.

Let's quickly recap that previous system. The past week was cold for Denver, with some snow as you know. 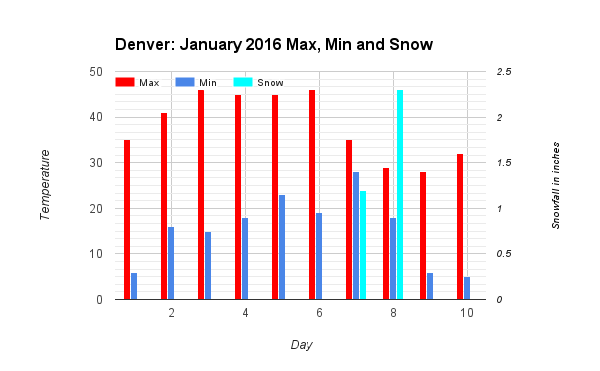 This winter, so far, doesn't necessarily fit the generalized El Nino pattern of a warm and dry season. Yet, the MJO (Madden-Julien Oscillation) and AO (Arctic Oscillation) provided some ingredients to give us a stormy pattern with some cold temperatures.

That combination of MJO and AO will be changing for the remainder of January and that change could mean fewer storm systems relative to the first half of winter and potentially longer periods of warmer temperatures.

I'm working on something to help explain the MJO and AO for future posts...I'm still working on it though.

The Week Ahead
I mentioned the next potential system is headed into the area by the end of the week. Until then, temperatures for Denver will be warming and conditions will be dry. The warm-up will be felt most for those in Denver and south through Castle Rock. 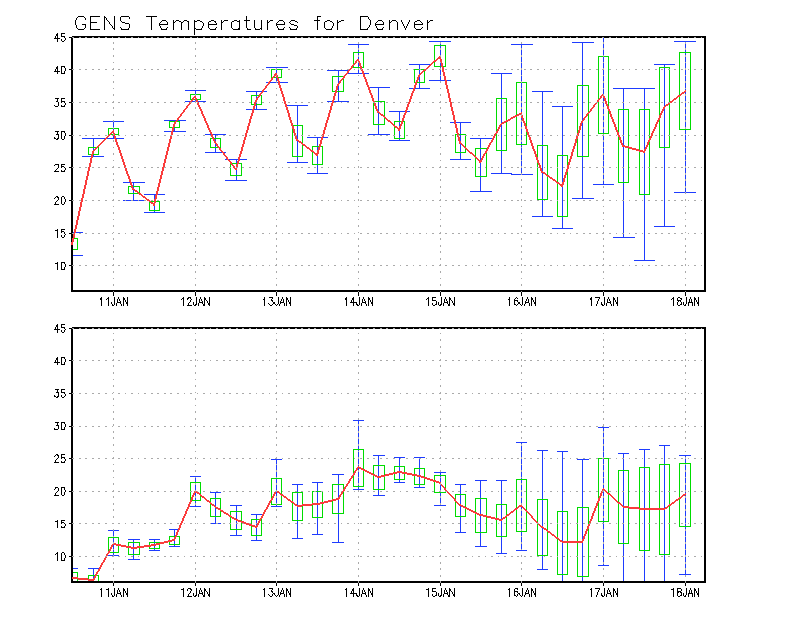 So for the city we are looking at highs in the middle 30s Monday, near 40 and above Tuesday through Thursday, and then some possible cooling thereafter although there's a wide range of possibility on just how cool.

Warm-up Will Be Slower For Some
Those to the north have been affected by some cold air drainage (prolonged stretch of cold days due to cold air settling into these lower elevations along the Platte valley) and foggy days, too, as a result. The fog and cold will slowly dissipate daily for these areas near Fort Collins, Loveland, and Greeley. Yet, your warm-up likely won't be as quick as your friends to the south.

There is still a chance for fog in that low-lying river valley as the cold air drains into it each night. Here's a visual of the fog potential through the next few days:

These warmer temperatures will take a bit of a hit by the end of the week and for the weekend as the next system passes by. Right now, this system appears weaker than the last in terms of cold and snow, we'll see.

We will update you throughout the week as to the snow chances and amounts, and the temperature impact as well. Right now, plan on cooler days with chances for snow starting by Friday. I'll leave you with a look at how the snow chances look as of Sunday's data.