Through the first half of January, 2016 Denver's mean temperature is running -2.6° F below normal. In fact, much of Colorado is running below normal for temperatures as well, with the general exception of the far eastern Plains.

Nationally it's been a bit of a mixed bag for temperatures, but coming off a record-setting warm December for the United States, January thus far has certainly been more winter-like across much of the nation. The warmest temperature anomalies through the 15th were up across the Great Lakes and midwest, with the cold hanging on in the west. 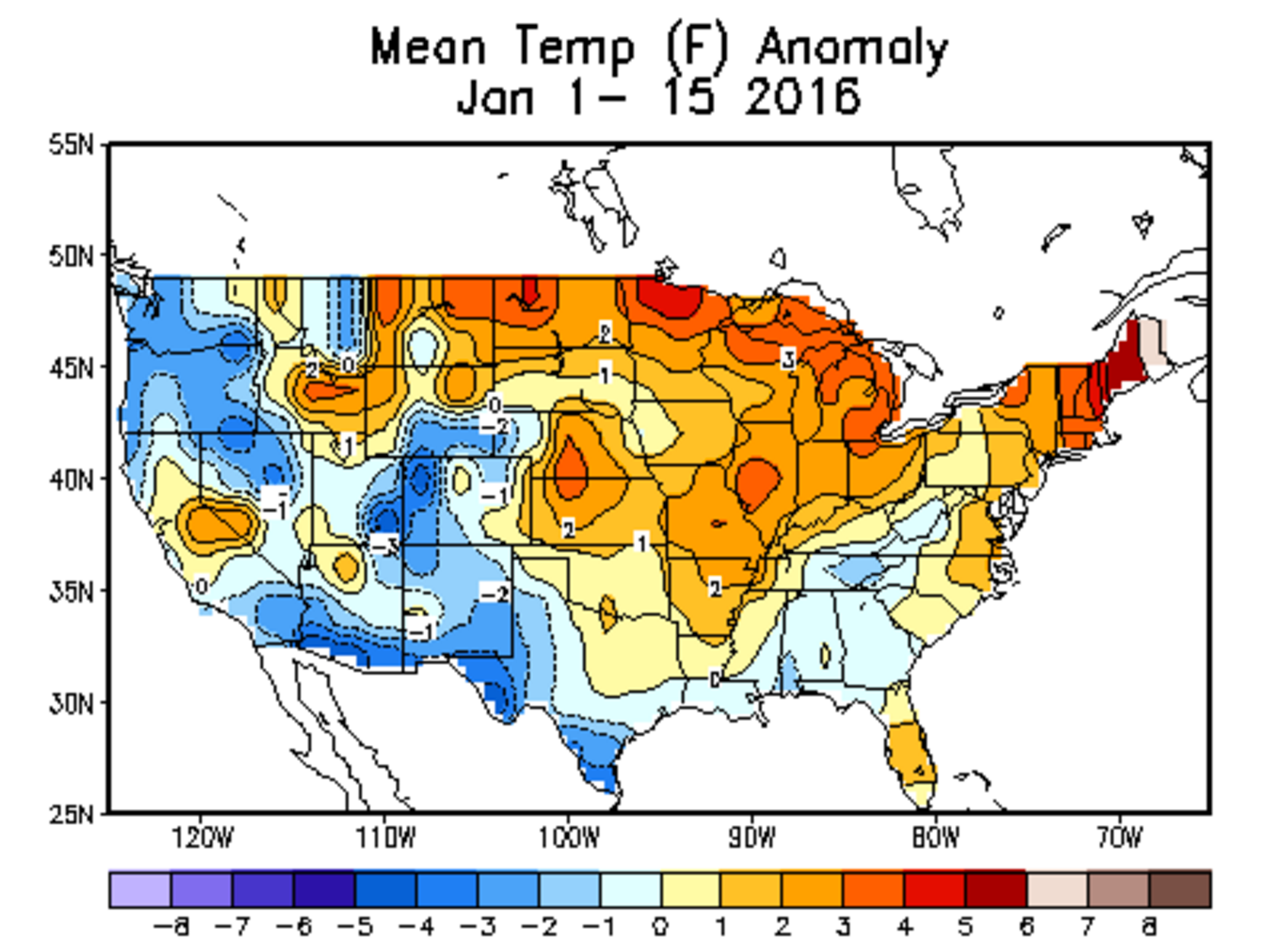 Where it's been warmest across the northern Plains states is also where we will find some of the coldest temperatures over the coming days, with highs this weekend below zero for places like Minneapolis and International Falls, MN. Here were the temperatures by mid afternoon today across the Great Lakes, brrr! 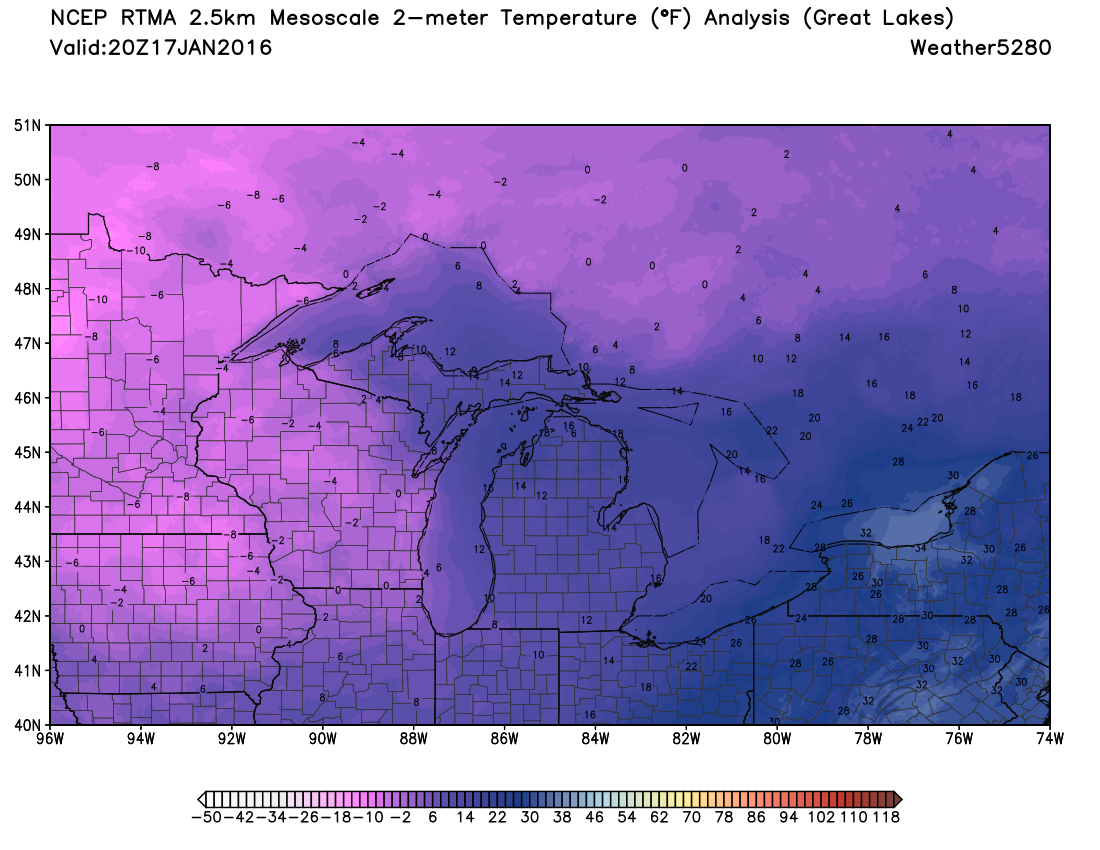 For Colorado the month has been pretty typical – the mountains have seen some nice snow (always a bonus this time of year!), and even across the Plains we've seen some accumulating snow. Through today, Denver has recorded 3.5" of snow officially at Denver International Airport. With an average of 6.6" for the month of January, we're sitting almost exactly where you'd expect us to be halfway through the month.

The week ahead
The week ahead looks a lot like last week, best snowfall chances will again be confined to the high country with near-normal temperatures across the urban corridor for most of the week. We'll need to watch a couple short-waves through the course of the week for scattered snow showers and breezy conditions across eastern Colorado, but otherwise expect warmer temperatures by Monday, with highs in the 40s through the middle of the week.

The 12z GFS shows this nicely, with light snowfall potential northeast of Denver, but odds not looking great in the city for snow this week: 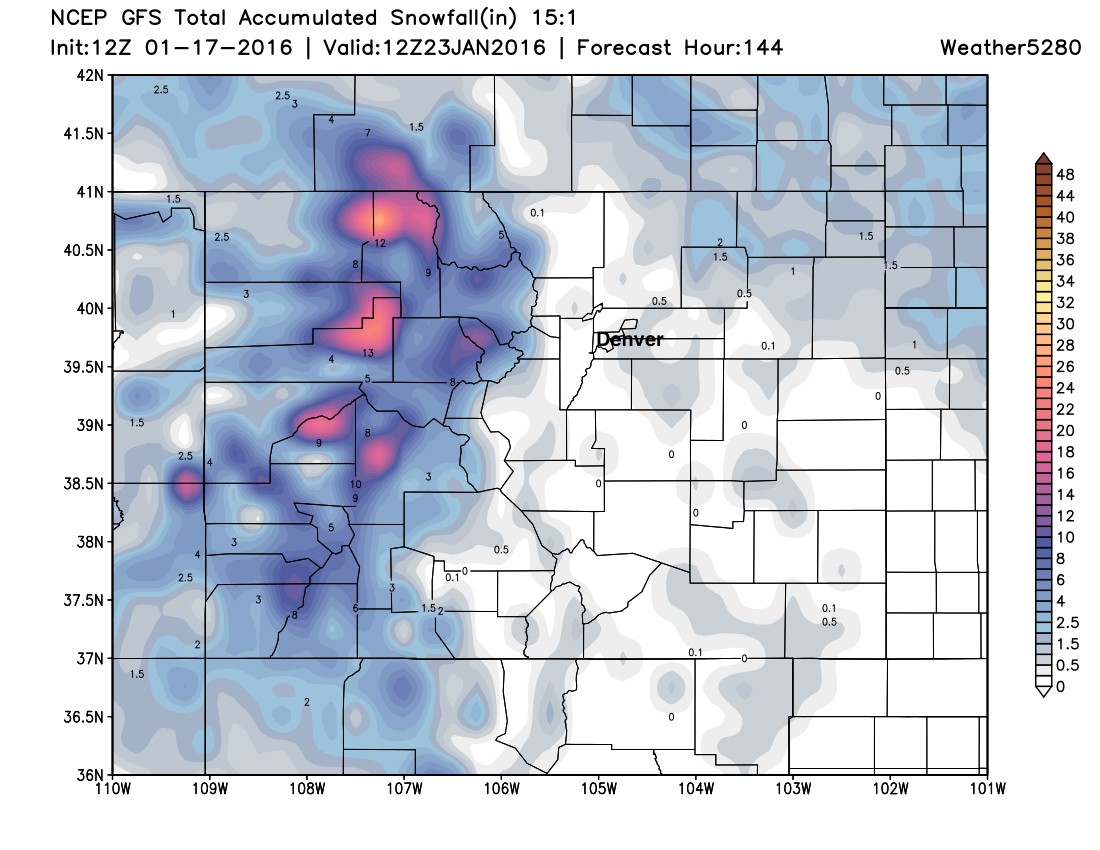 The bigger weather story will be what happens (or doesn't happen) well east of us, as global models are in decent agreement that winter storm will impact the mid-Atlantic states and portions of the northeast late in the week and next weekend. A lot to be watched here as models have consistently been forecasting (incorrectly) big storms all this month for the northeast, but this one may finally have better legs underneath it. If your travel plans take you east late in the week, you'll want to stay up to date on the latest forecasts for the region.

Models are currently forecasting a shortwave out of the west to phase with the northern branch and deepen a big ULL over the mid Atlantic to end the week, while pumping the ridge in the west. This should quiet our weather across the state for the second half of the week, and leave a potentially interesting setup in the east. Here's a look at GFS forecast 500mb by Friday night: 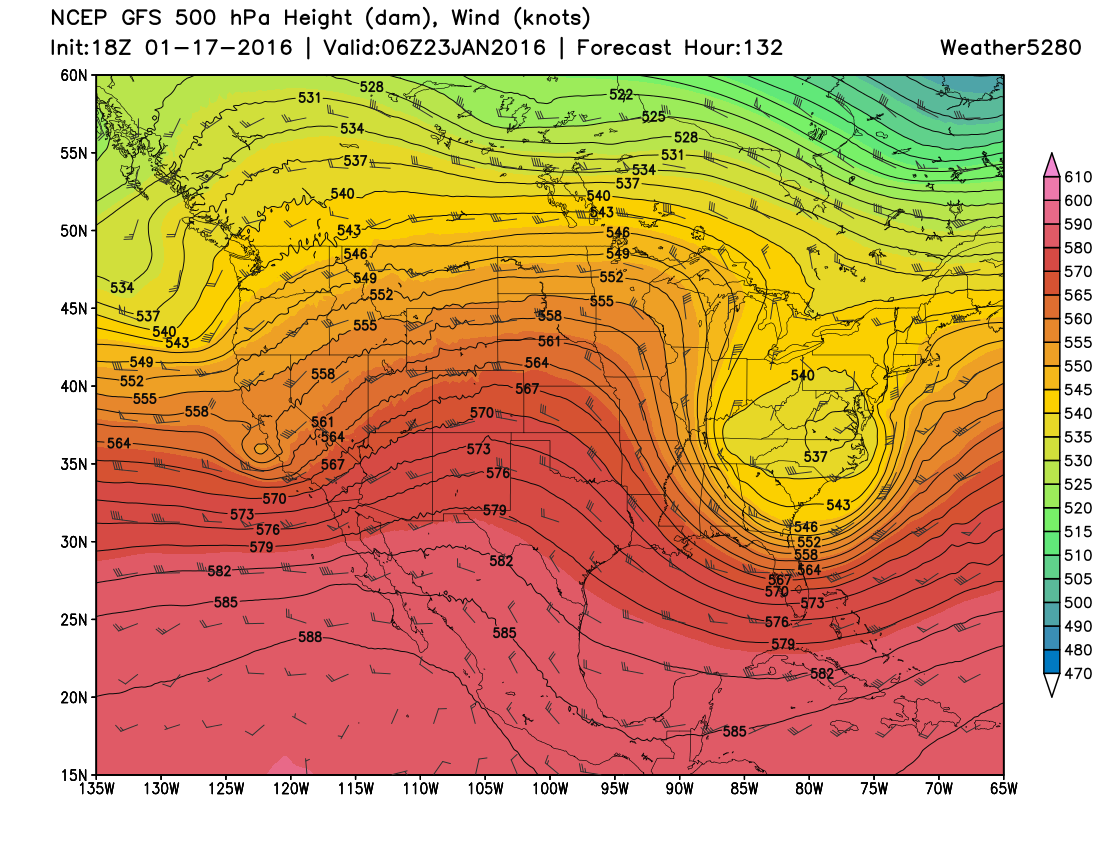 And the surface map from the 18z GFS: 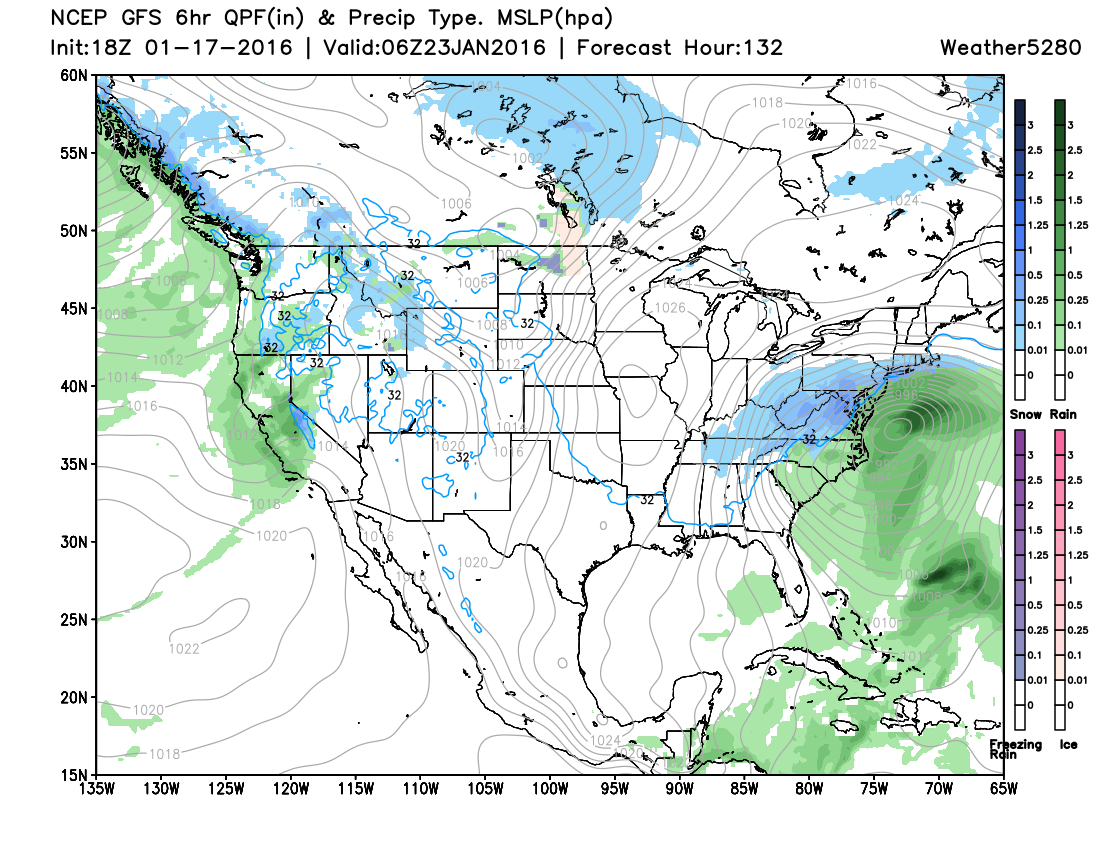 Of course this will require a LOT of moving parts to align just right for a big snow, and we're seasoned veterans in watching good setups fall apart, so... we'll see. 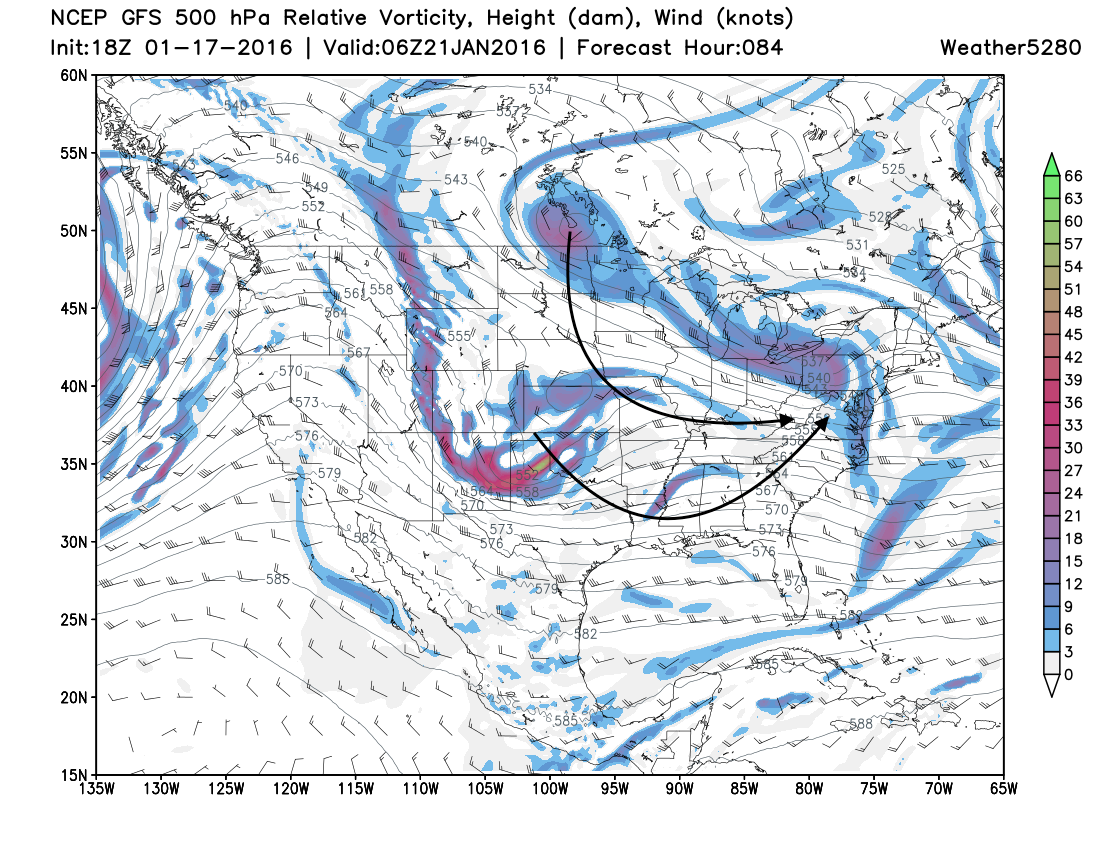 Again, the pattern has been threatening for some time now, so in many respects the 'signal is right' – we'll just have to see how things progress as we move through the week, the disturbance for this late week east coast system is still well off the west coast, out over the Pacific.

As for our weather, and when will Denver's next chance for a snowstorm come? That may be awhile as we watch this pattern play out, and likely focus on the time period after day seven, at least.

One teleconnection we watch to see if a change in the pattern is coming for our neck of the woods is the PNA. As you can see, it's been pretty steady and positive this month, and isn't looking to change any time soon: 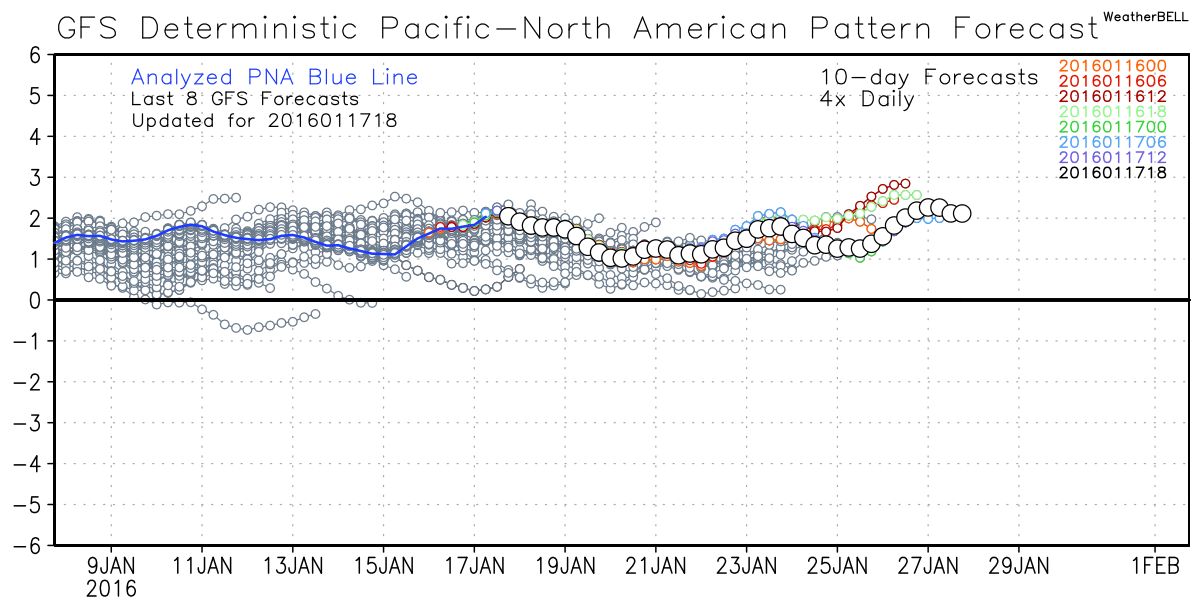 That said, the European weeklies showed the PNA dipping negative by the end of the month and first week of February, and global ensembles have been suggesting troughing will reestablish itself in the west by the last part of January and early February as well.

Here's the 18z GFS ensemble mean, showing ridging redeveloping over the east, with troughing in the west to end the month: 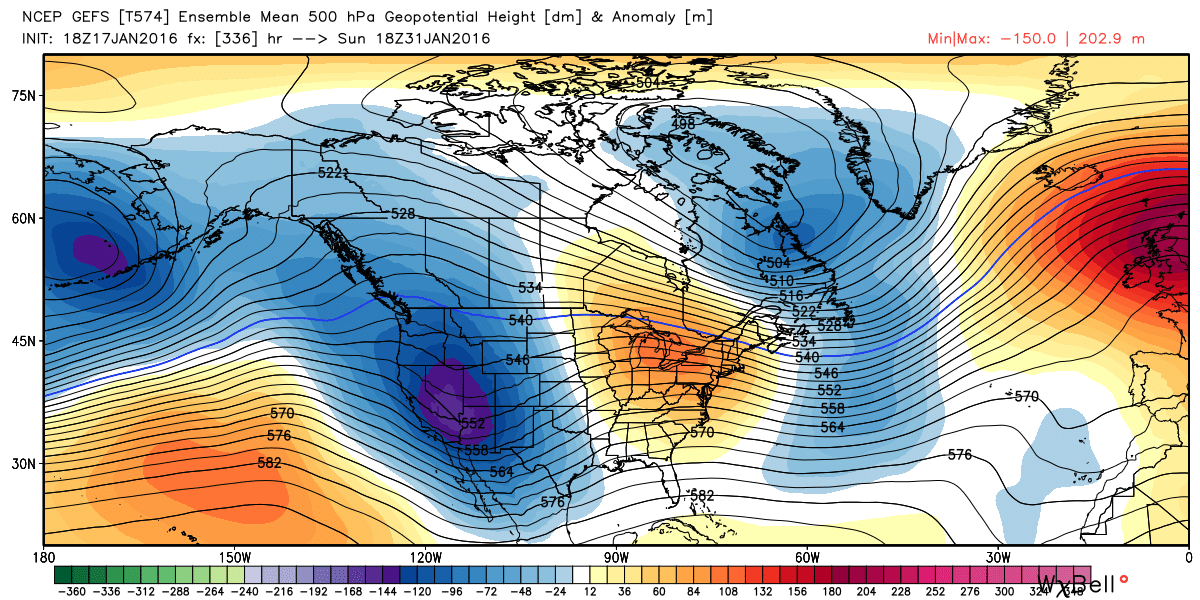 The EURO ensembles have been even more relentless showing this western trough, so we'll see. At this point it feels a bit early to fully embrace this solution as operational models are less enthusiastic about flip late-month, and we'd like to at least see models showing some changes in the PNA/better signal from the MJO before jumping on this completely.

Enjoy the week ahead, state tuned, and of course... Go Broncos!