You've probably seen numerous graphics depicting how much snow we may see or may not see with this system over the course of the last week. Social media certainly has the market cornered in that regard lately.

However, we at Weather5280 usually do not like to put out totals too early due to the delicate nature of our storms and the various things that impact their output. A LOT CAN CHANGE IN A VERY SHORT PERIOD OF TIME. But, we recognize that many folks want more than just the word "significant" or "heavy" when they digest storm data. You want a number or numbers... We understand.

As we watch the latest data roll in tonight (hey Friday!) we thought we'd share some modeled precipitation maps with you for this storm. Please don't take the model output to the bank, as it is still early. As we've discussed all week there's still lots of wiggle room with how this thing eventually tracks, and with that... expect these numbers to fluctuate as we head into Saturday and beyond. 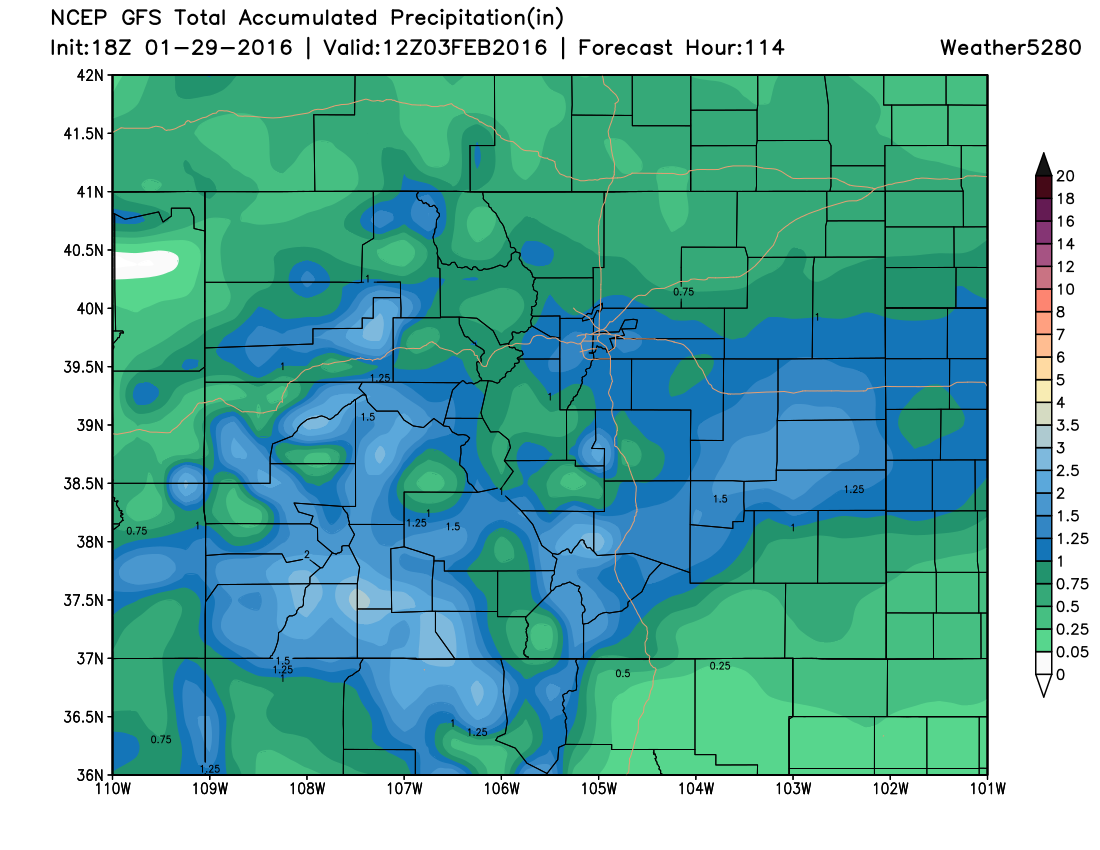 Yes, the GFS model is putting out over an inch of total liquid, from Saturday night through Tuesday night. Keep in mind, we think the lion share of that will fall late Sunday night into Tuesday. With the airmass being colder (as we've talked about) we think the liquid to snow ratio will likely end up around 15:1. That means for every inch of liquid that falls, it will equate to 15 inches of snow. You can do the math by looking at the map. Yes, there are some pretty wild totals being forecast by the GFS. However, this isn't something that is new – the GFS has been pretty bullish on precipitation totals for a while now.

12z ECMWF Model
While we can't show you precipitation totals or snow totals from the European Model, we can relay to you that its output is pretty bullish too. While the totals are distributed differently in time (remember, the ECMWF model suggests more may fall on Sunday than the GFS), it is still forecasting precipitation totals in excess of 0.75" for most areas of Eastern Colorado. It does bullseye the higher terrain west-northwest of Denver and Fort Collins, I-70 and Palmer Divide, and locations to the south and southwest of Pueblo.

Here's a downscale ECMWF WRF produced by WeatherBell that shows a similar look discussed above. Note one item of concern here for south side of the Springs... green blob indicating lower QPF. 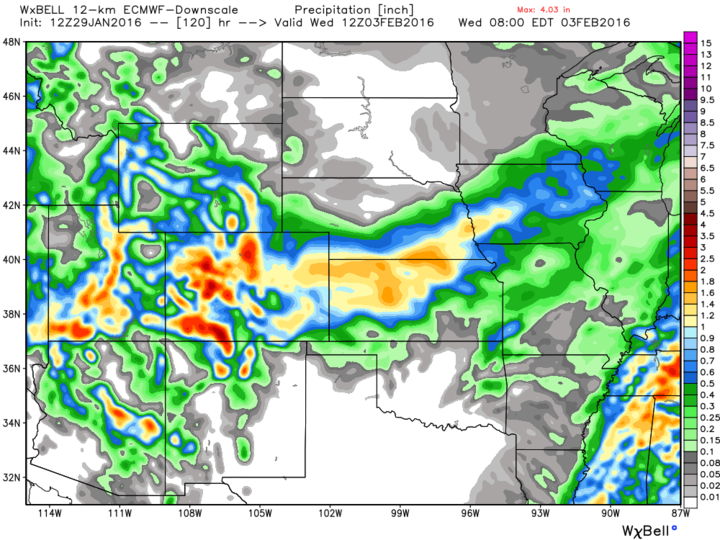 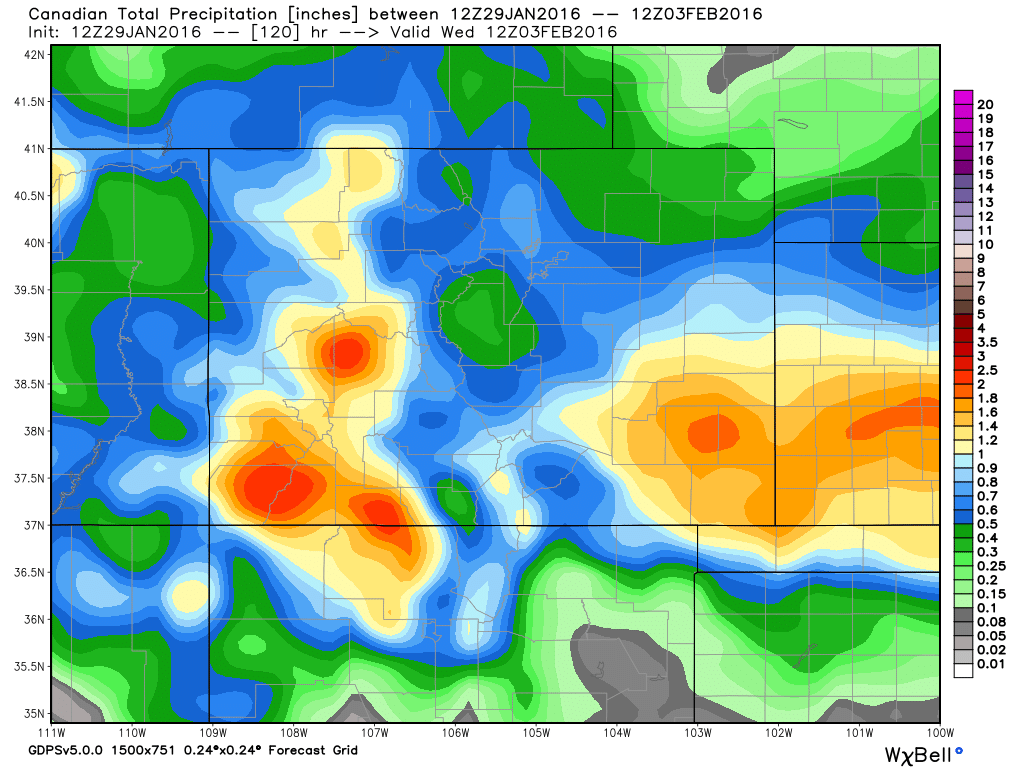 As you can see, the Canadian model hammers the southeast part of the state with the heaviest totals. Total liquid in excess of 1.50" means snowfall totals could approach two feet in that bullseye. While lesser totals are found farther north, they are still significant. Denver and the Palmer Divide would get in excess of 6 inches of snow, with amounts closer to a foot northwest of town.

00z NAM
The 00z NAM just came in and it's producing impressive numbers. It only extends through early Tuesday morning, so keep in mind the model still has snow falling at which point this cumulative QPF forecast is valid for. Needless to say, if right... big snowfall numbers for eastern Colorado: 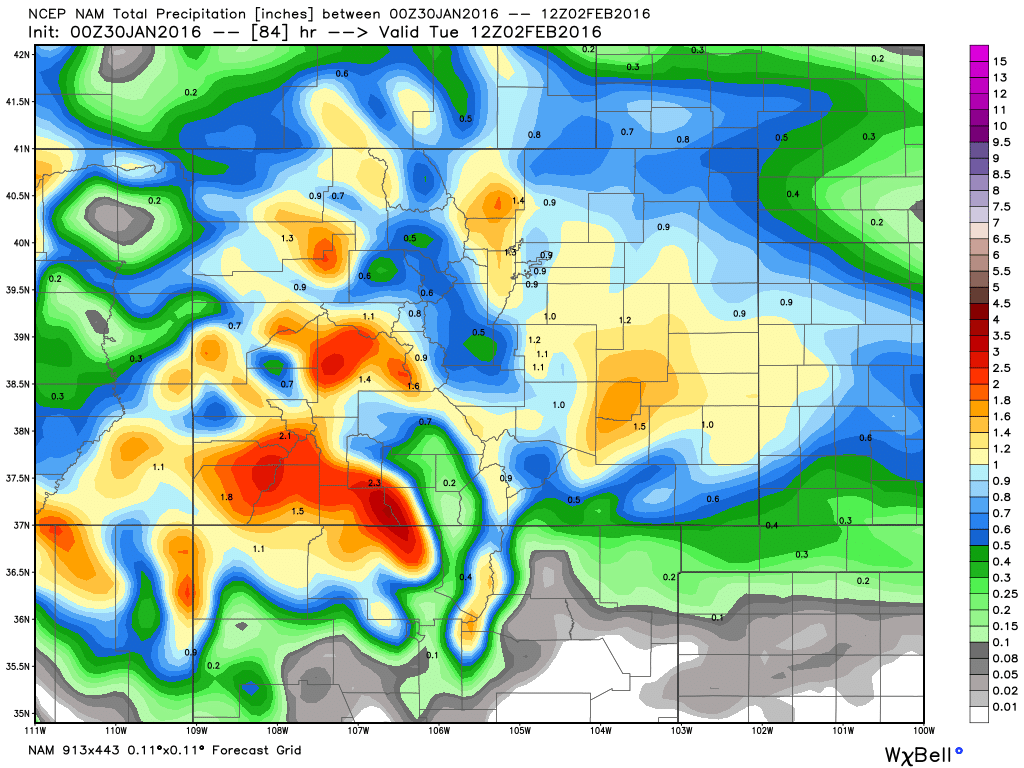 Model Bullseyes
With almost every computer model run, these bullseyes shift around and change value. What's important to note at this point, is that with each consecutive run the remain in the ballpark, even if the details change. That continues to give us confidence that significant snow is likely going to occur across much of Colorado. If that main storm track shifts just a bit farther south or north, the implications are huge. That is why we are still reluctant to put out totals this early... not because we don't know that they may be significant.

As for where we sit with snow totals tonight... it'd probably look something like this for Denver. Playing a bit more conservative on the high side for now, as we wait to see how concerned we need to be about the low tracking too far south. Should things stay on track, expect to see the probabilities in the middle of the pack come up over the next 24 hours or so. 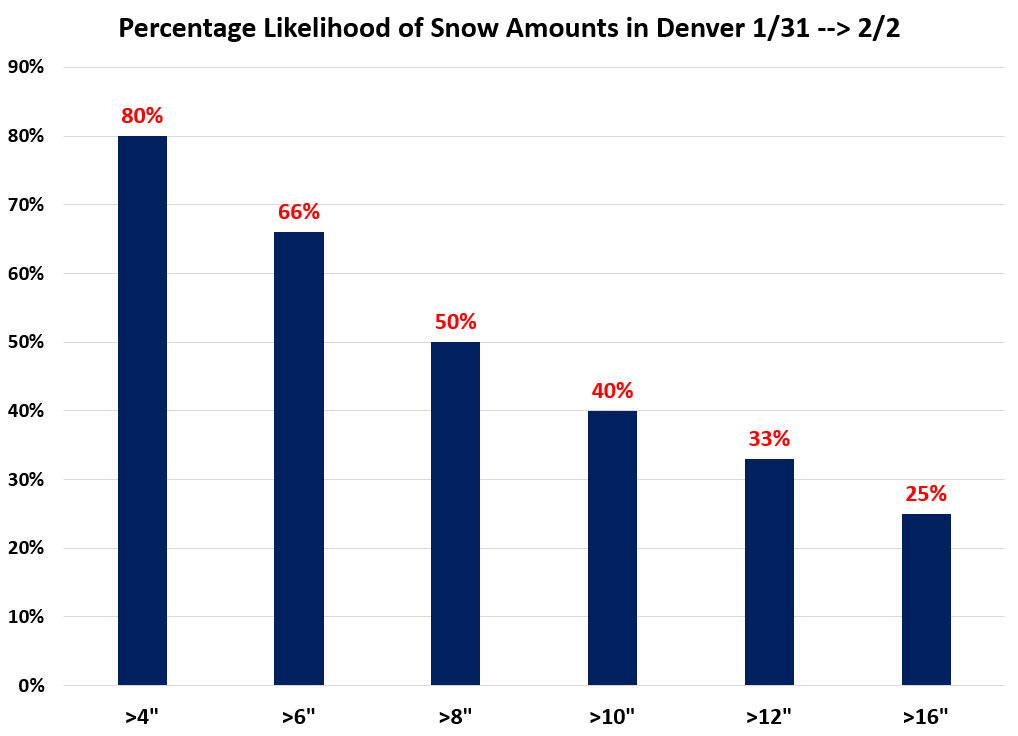 Impact
We believe that the overall impact is what is most important, and will continue to stress that. The impact on travel (both ground and air), schools, workplaces, ranchers and their livestock, etc., will likely be a negative one due to WIND and snow. Simply put, we like planning for things like that more than a specific number. Because that number can mean many different things to many different people. The impact, my friends, is something we will always stress over a specific number.

Bottom line... focus on the potential impacts and we'll work on getting an initial snowfall published soon – likely Saturday. As you can see above there's ample precipitation being forecast by the models, the low is forecast to track near the sweet spot for heavy snow up and down the Front Range, and we're working with what so far as been pretty consistent modeling thus far. All good signs if you're looking for a good snow.