Our hot July comes to a very pleasant end this evening, though not after another day of very warm temperatures in the city. We reached a high of 96°F at noon at our station (94° at DIA), but have since cooled nicely with afternoon cloud cover, showers, and storms across the region. 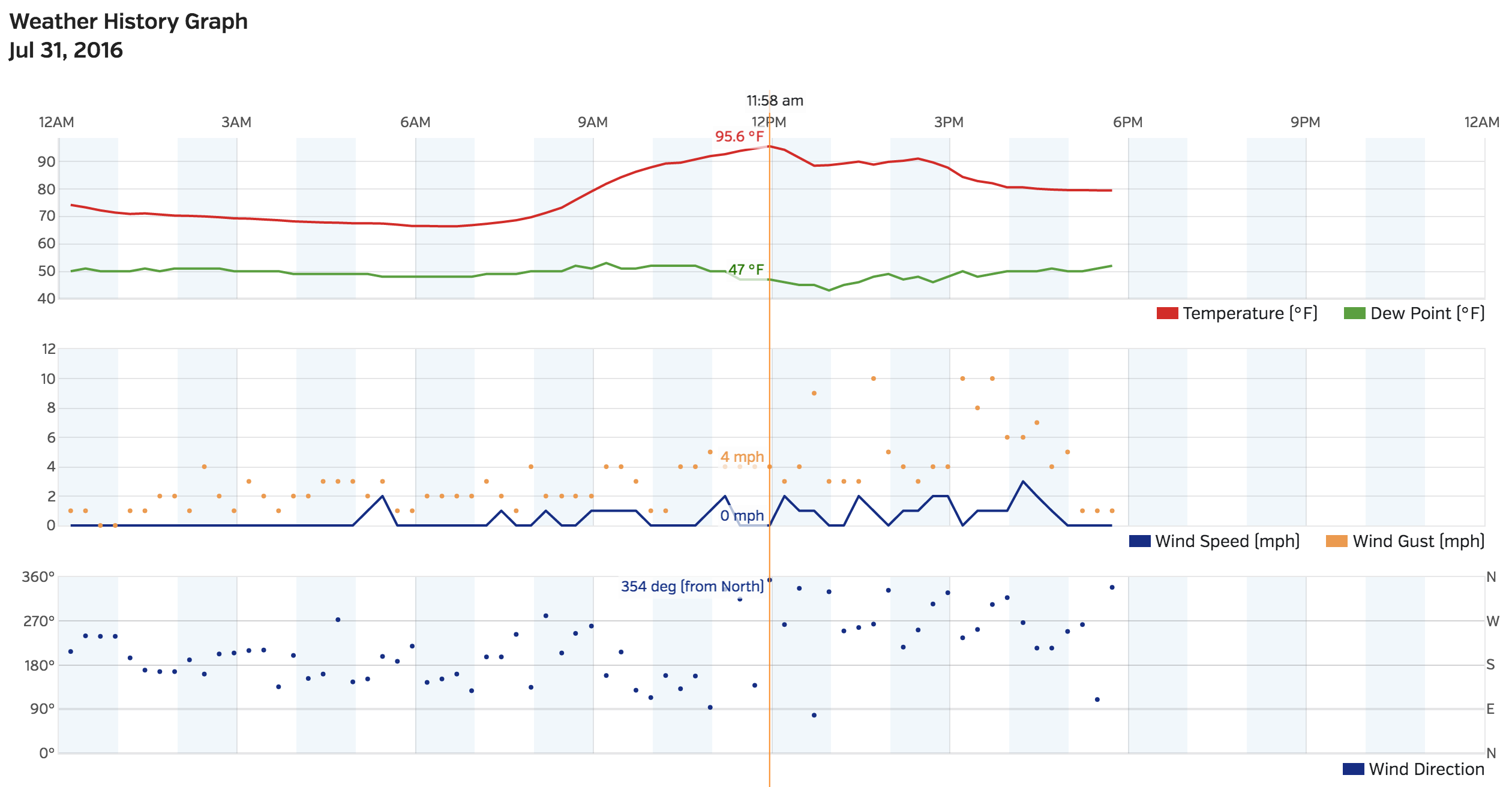 So far today Denver proper has remained mostly dry, and it looks like this may remain the case through the evening as the heavier storms move out east across the plains. As of early evening there were still showers and storms along the northern I-25 corridor, but storm activity was quiet in the Denver area.

Really, as goes today so went most of July. It was a hot month for the state, with Denver's average temperature ending 2.0°F above normal. And, with just 1.06" it looks like it'll end an inch below normal for precipitation as well – barring any stray showers or storms tonight. The month saw an impressive 21 days that were 90°F or warmer (compared to 16 last year, but well short of the record of 27 set in 2012 and 1964). The warmest day of the month occurred on July 10th, when DIA reached a high of 102°F, breaking the old record for the date of 99°F set in 1955.

The week ahead
The week ahead starts out looking very much the same as the last several weeks: highs in the low to mid 90s, with isolated to scattered storms each day. It's not until the latter half of the week that we finally see a better chance for storms and cooler weather across the state.

By Thursday we see the ridge shift a bit further east, which will allow a pretty good looking southwesterly flow to transport moisture-rich subtropical air back into the state for Thursday and Friday and Saturday. The first image below shows the positioning of the ridge by early Friday, with the second showing the precipitable water anomaly forecast from the GFS for Thursday night – well above normal (green) across the southwest and Colorado, indicating good moisture supply. 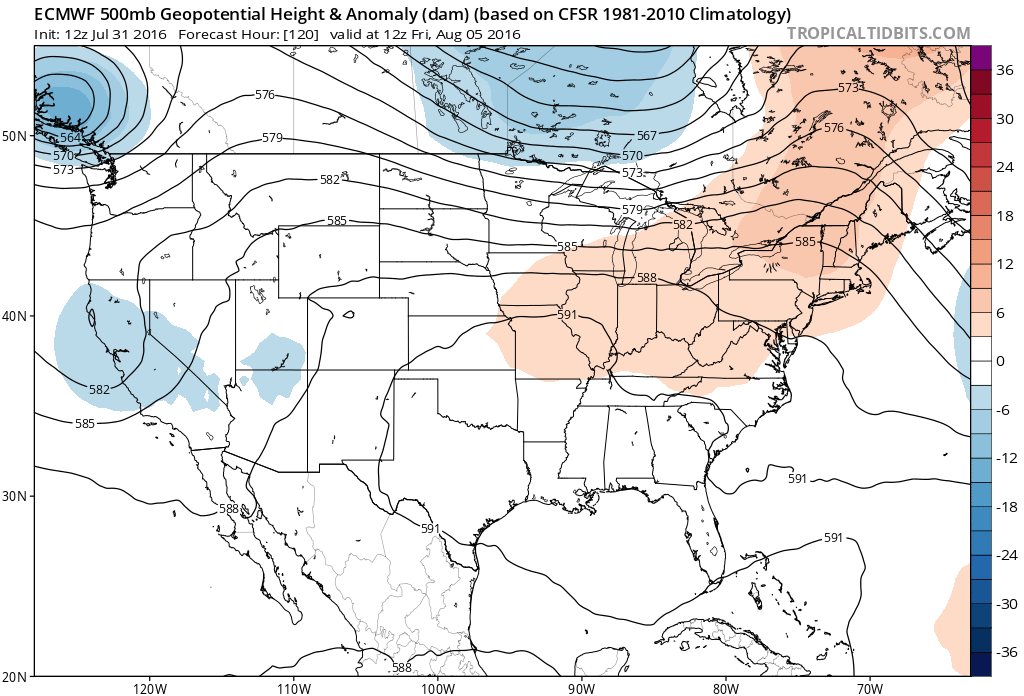 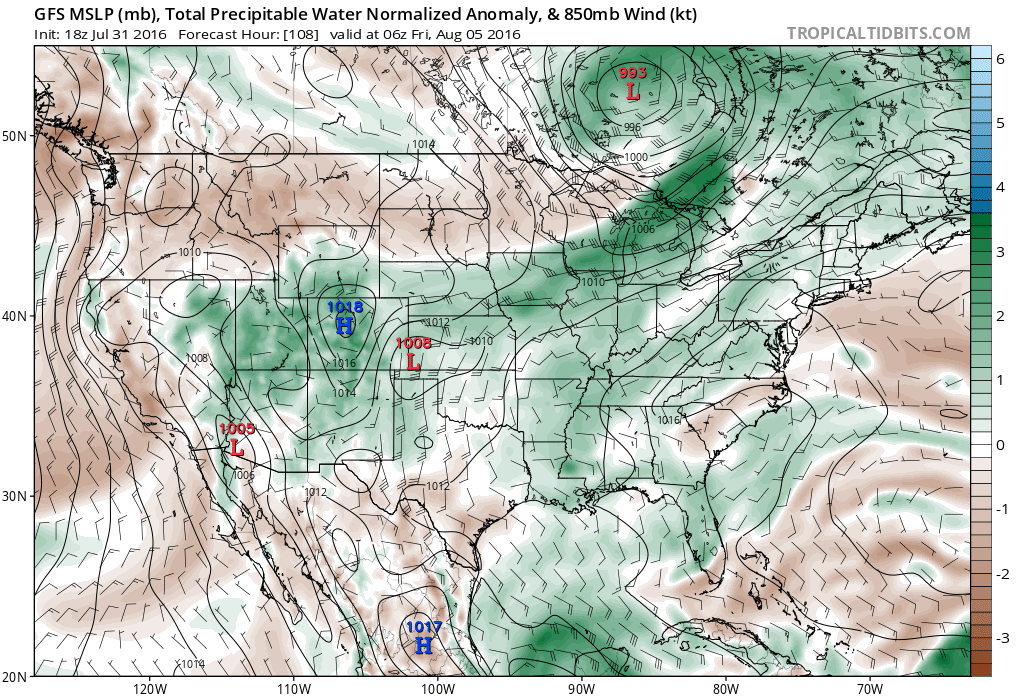 Additionally, we'll be tracking a pretty strong cold front to move across the state Thursday, which should not only supply some upslope for us Thursday, but will also go a long way in knocking down our temperatures a bit, at least for a day or two. The map below shows the GFS 2-meter temperature anomaly forecast for Thursday, with it projecting temperatures to be below normal (blue) across the northern plains and northeast Colorado, with the well-defined front stretching across southeast Colorado northeast into Nebraska. 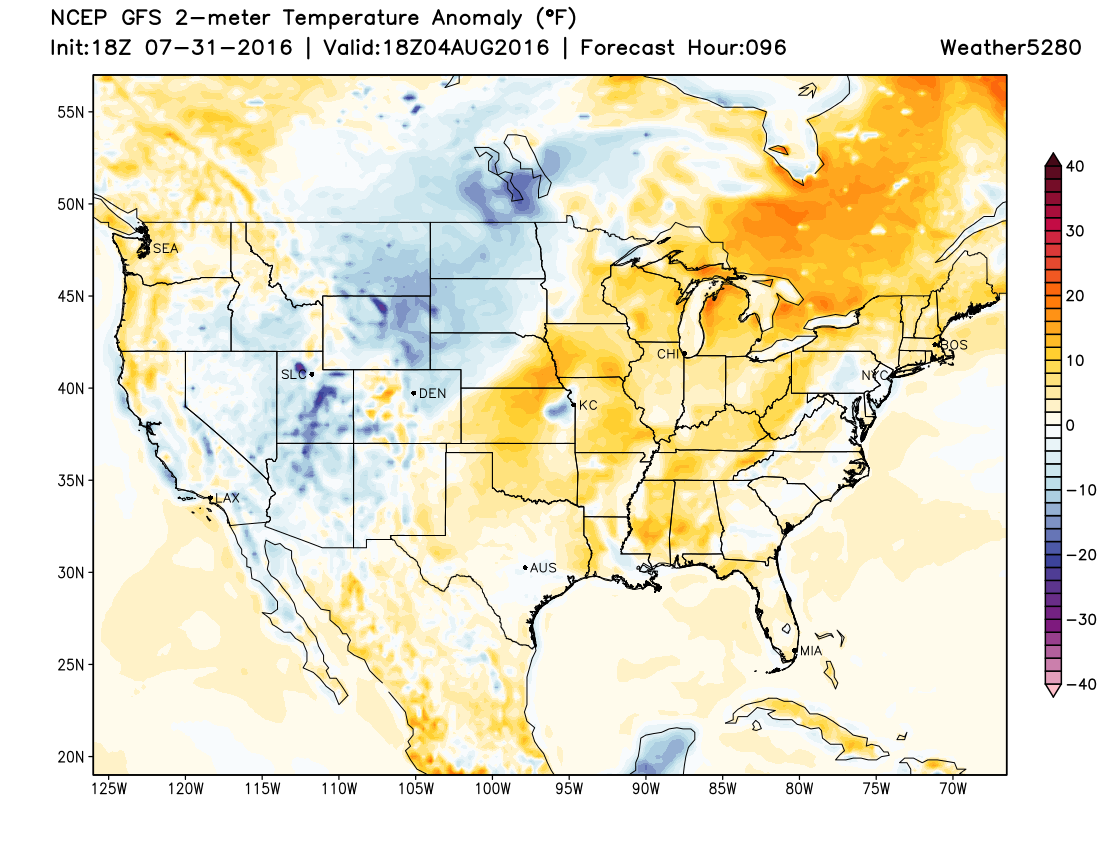 By Friday we'll see even cooler temperatures across eastern Colorado, with what looks right now like a good chance of rain for many locations across Colorado: 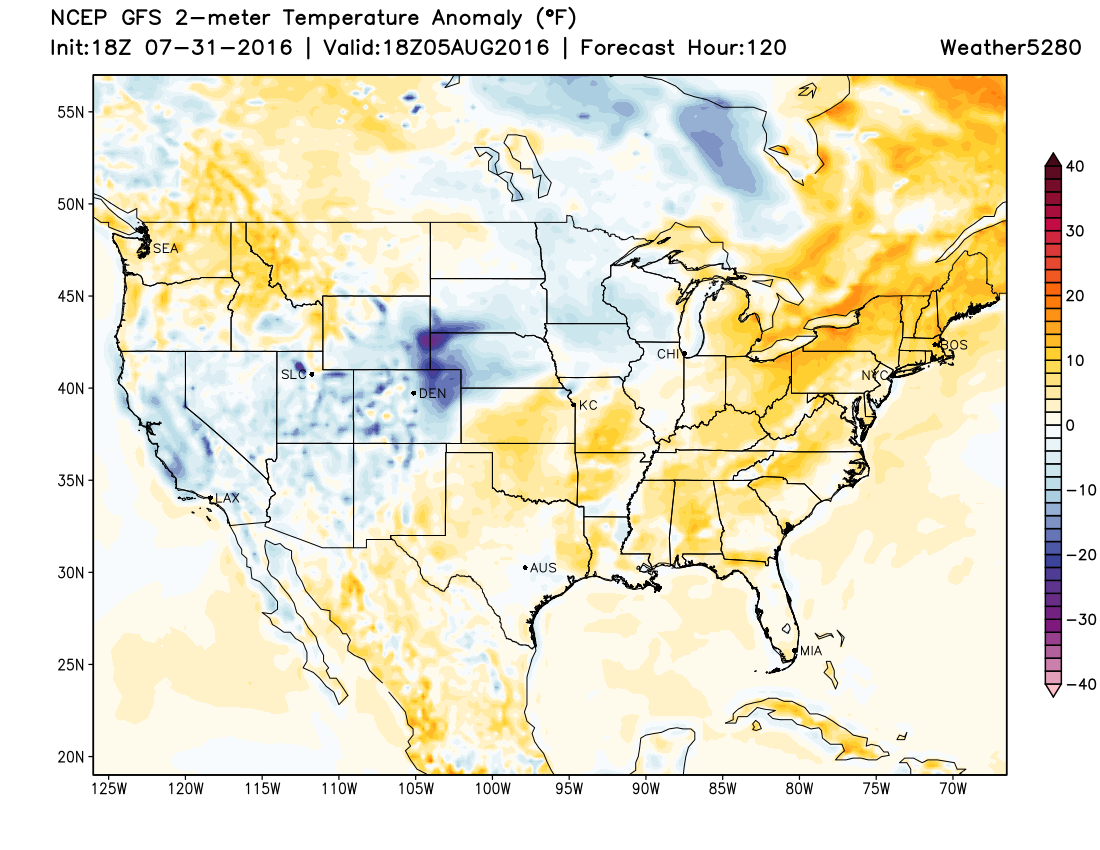 As for precipitation... still some time to see where the heaviest rainfall well end up, and of course a lot will depend on who gets lucky with storms on Thursday. The latest GFS shows rainfall totals >1" for the Denver area from Thursday through Saturday, while other models (and other runs of the GFS for that matter) focus that precipitation elsewhere. Today the EURO really focuses precipitation across western Colorado, for example, while today's GEM centers on all of southern Colorado. Here's the 18z GFS forecast from today: 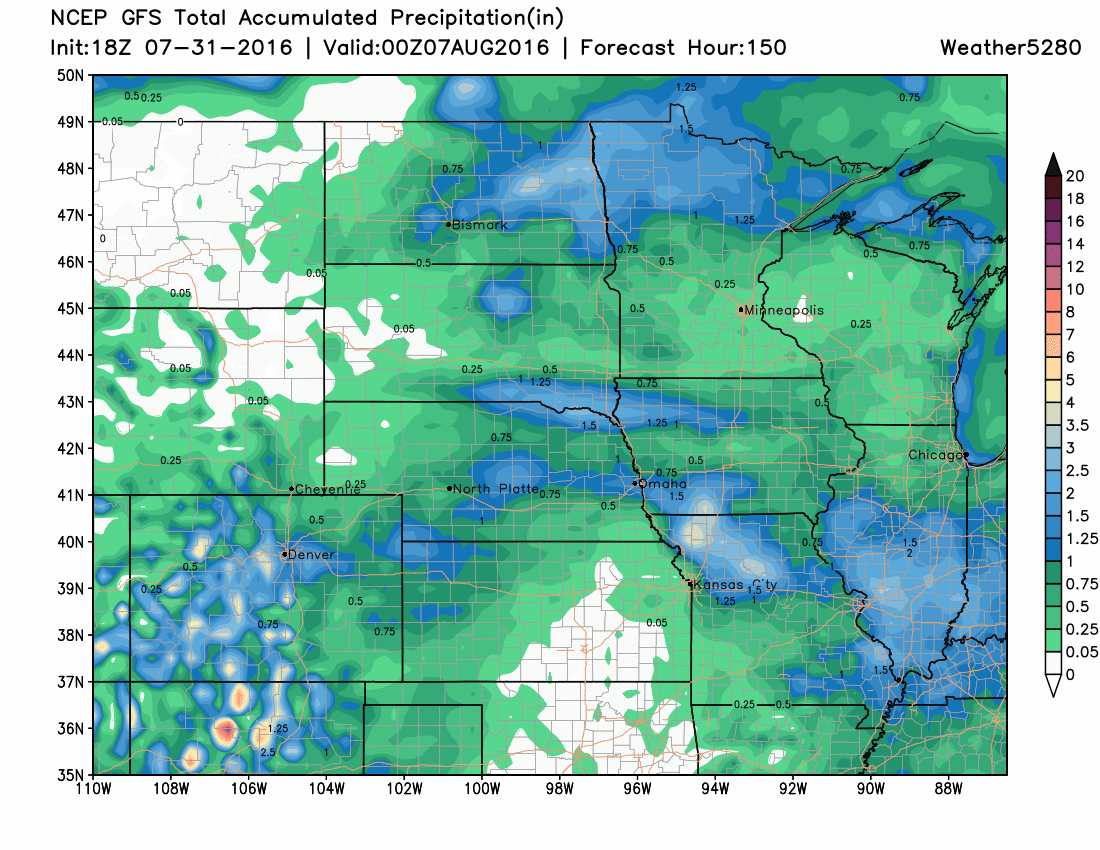 A quick look at the national view shows that good moisture flow across Arizona, western New Mexico, extending up into Utah and Colorado for the end of the week: 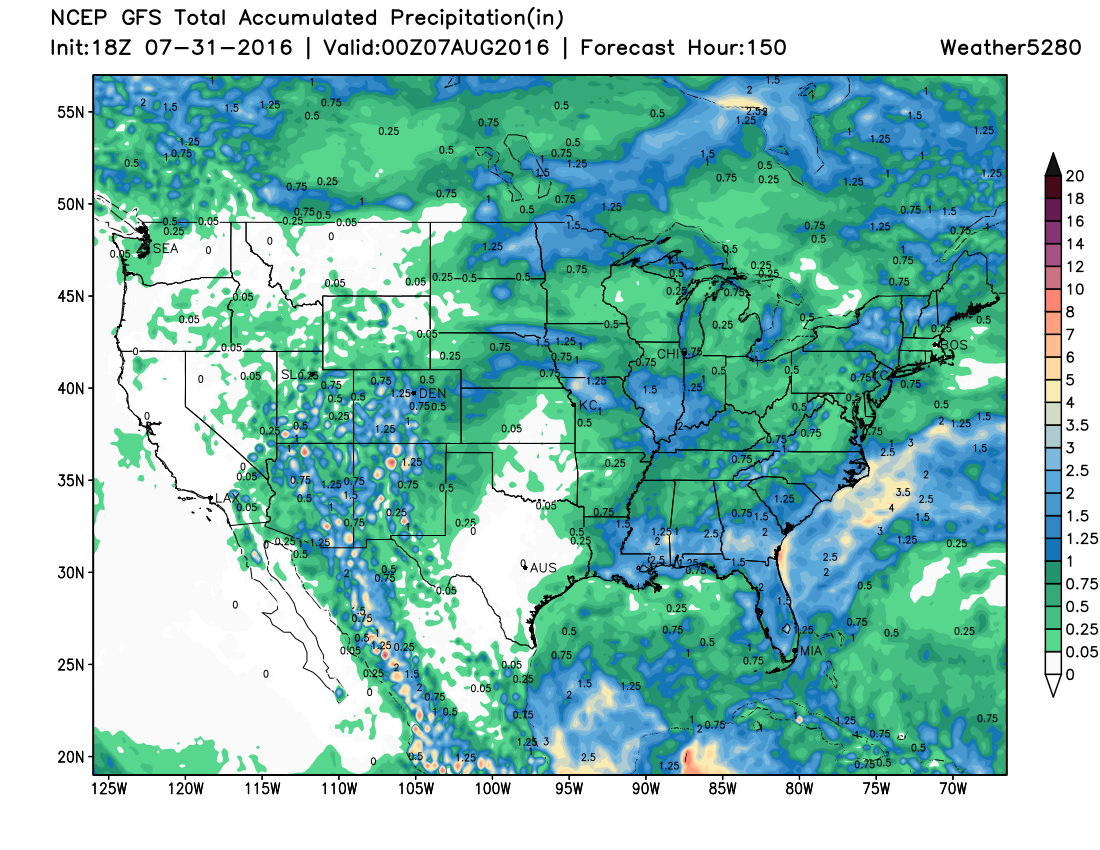 So, still some time to track the details, but for now plan on warm temps and precipitation chances on the low-side to start the week, with cooler temperatures and better rain chances arriving for the state come Thursday. As of now, Thursday looks to stand the greatest chance for storms to turn severe, with more of a heavy rain threat for Friday.