Cold Start to the New Year after Mild Finish to 2016

2017 forecast to begin with another arctic outbreak across U.S.
As we discussed in this week's State of the Atmosphere, we're still tracking some very cold air which is set to slide south for the first week of January 2017. This will mean another round of bitterly cold temperatures for Colorado, as well as another chance of snow.

Much like the pattern we saw during December, this one setup isn't necessarily favorable for a big snowfall along the Front Range. That said, we do expect to see some snow over the course of next week, and with such cold temperatures in place, we could see a few inches fluff up in many locations. In general, we'll be looking at a prolonged period of light snow potential, with snow showers possibly for several days next week with the cold air in place.

GEFS Forecast
Take a look at the graphic below. It's the GFS ensemble forecast (multiple variations of one model) for the next 10 days in Denver. The top chart shows forecast temperatures. The red line is the mean temperature of the 20 ensemble members, while the whisker plots show the forecast spread. Note that for the next several days... there's good agreement in the temperature forecast, but as we head into next week we see a greater spread. ALL members are much colder for next week, but some are VERY cold, while others are just cold. The blue line shows zero degrees, note that the mean forecast dips below zero several times next week.

The bottom chart shows 6 hour QPF (or precipitation) forecasts for each of the ensemble members. For this example 16 is highlighted, and it shows light QPF for upwards of 50 hours next week. You can see that all of the members have some moisture forecast, but they vary in intensity of that moisture, and timing. This leads to a relatively high confidence we'll see some snow next week, but exactly how much and when is a bit more uncertain. 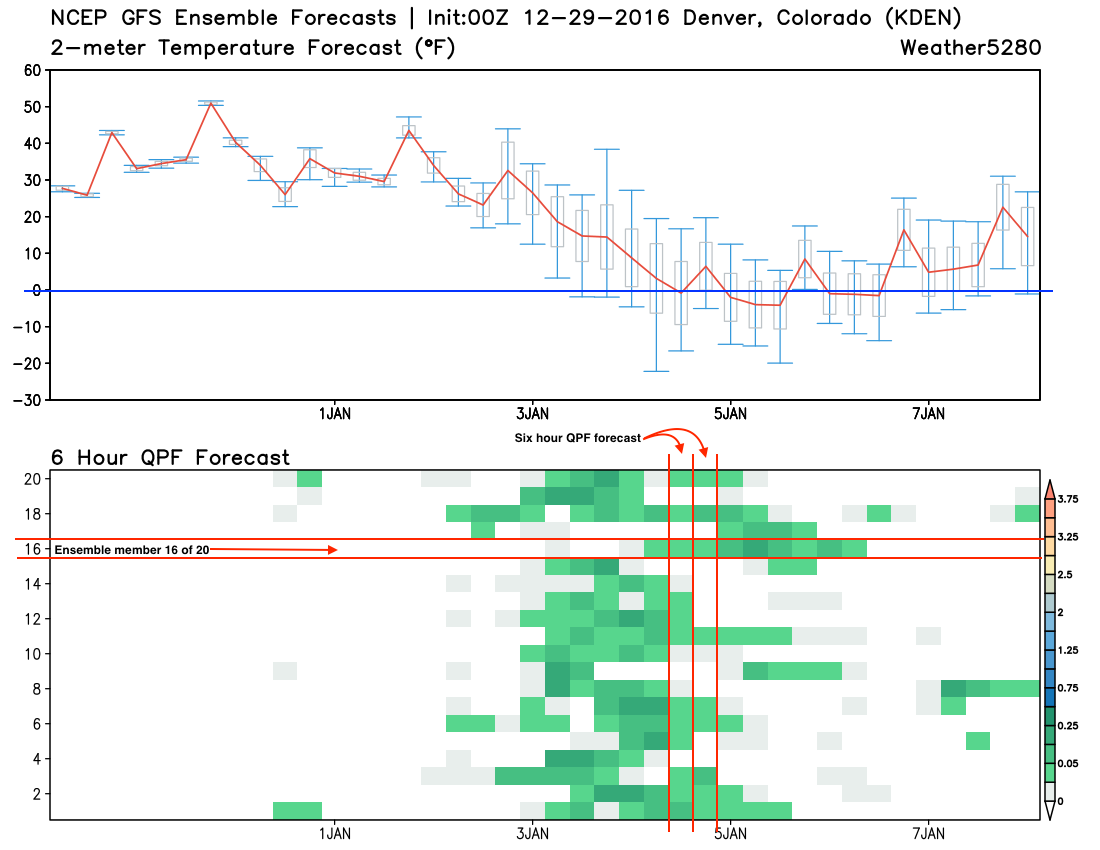 CPC Outlook
With these expected changes, we see the CPC issuing a very cold outlook for the 6 - 10 day period across the U.S., with the focus of the cold across the intermountain west: 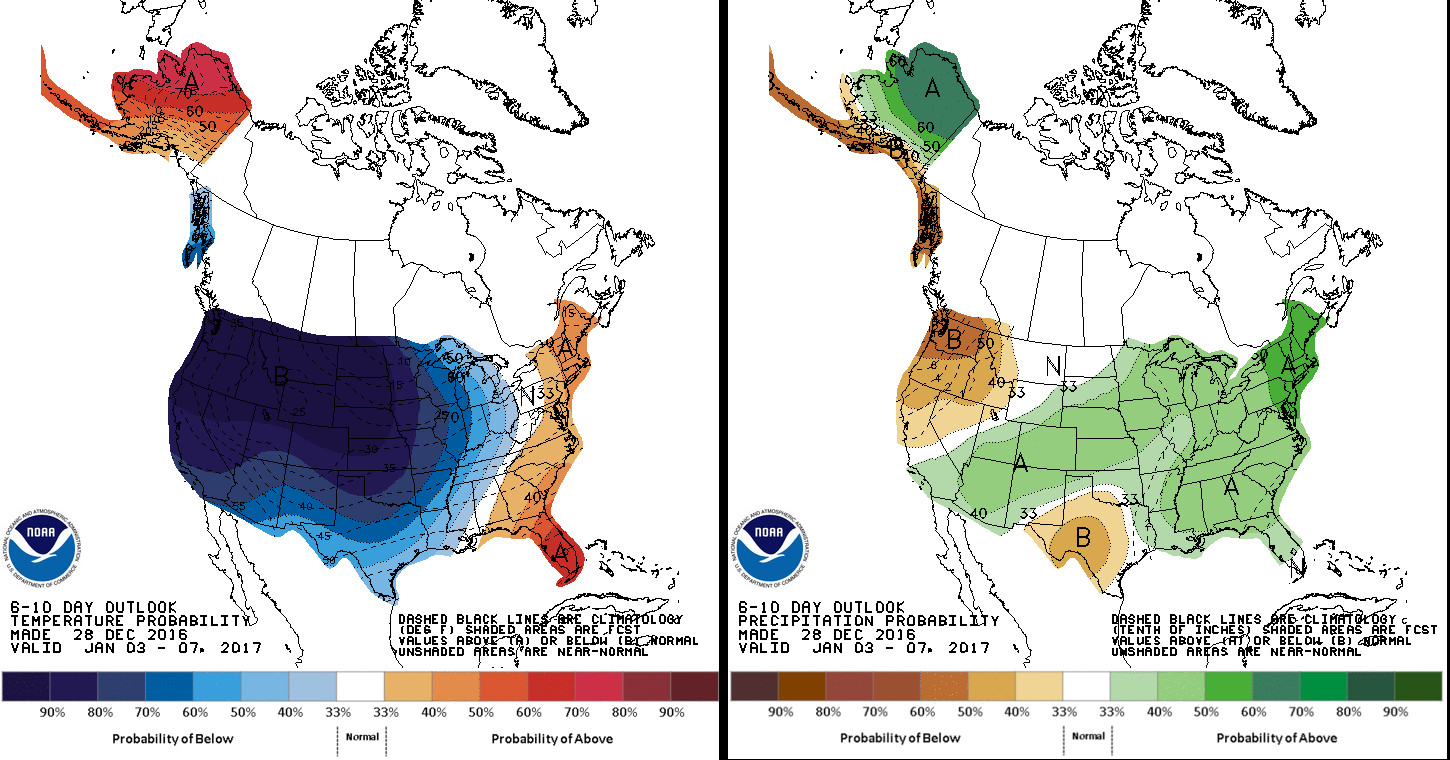 Interestingly, they also have all of Colorado under decent probabilities for above average precipitation – which, while we see a good setup for the high country to see some more good snow, it could be the plains struggle a bit in that regard. Time will tell.

How cold?
This is the big question and likely one we won't be able to answer with confidence for a few more days.

As the title of this post indicates, we'll be quite warm in Denver over the next several days, with highs Friday near 60 in the Mile High City. Temperatures will be a bit cooler for the weekend, but still near seasonal norms (in the 40s) before much colder air begins seeping in on Monday.

Monday through Thursday of next week look to be quite cold. Latest MOS guidances and ensemble mean forecasts from both the GFS and EURO suggest highs in the teens for Denver for several days, with overnight lows near or below zero.

Here is a look at the 12z operational forecast from the GFS of 2-meter temperature anomalies (departure from normal). Of course for context you'd need to know what "normal" is, but it does a great job showing the above average temperatures we're expecting to end the week, being replaced by bitterly cold temperatures next week – especially across the intermountain west and northern tier of the United States, where the purples show up:

And here's a look at actual 2-meter minimum temperatures forecast over six-hour stretches next week. A LOT of below zero reads for the west/north-central U.S. with this outbreak:

More on the snow, please
Again, the snow may not be the big story with this pattern next week. Cold will rule the headlines, but we do expect to see a least some light snowfall from time to time really anywhere from Monday through the end of the week. As we get closer we will be able to better pin down timing and impacts in this regard. With high snow ratios and several disturbances progged to move through the state next week, areas of decent snowfall can not be ruled out, either.

For now, plan on more good snow for the high country, as well as a good chance of snow along the I-25 urban corridor and out east across the plains.

Forecast totals currently range from just a Trace of snow to several inches of snow depending on which model (and which run) you're inclined to believe. While it's far too early to say for certain, it does appear probable that with high snowfall ratios, and several short waves moving through the region next week, that some locations could see several inches of snow before all is said and done.

Not to be taken too literally, please, here is a look at the latest GFS snowfall forecast for north America over the next 10 days. With all that cold air pooling into the United States, we could see a bit of snowfall pretty far south over this period, with most (if not all) of Colorado at least seeing some snow. 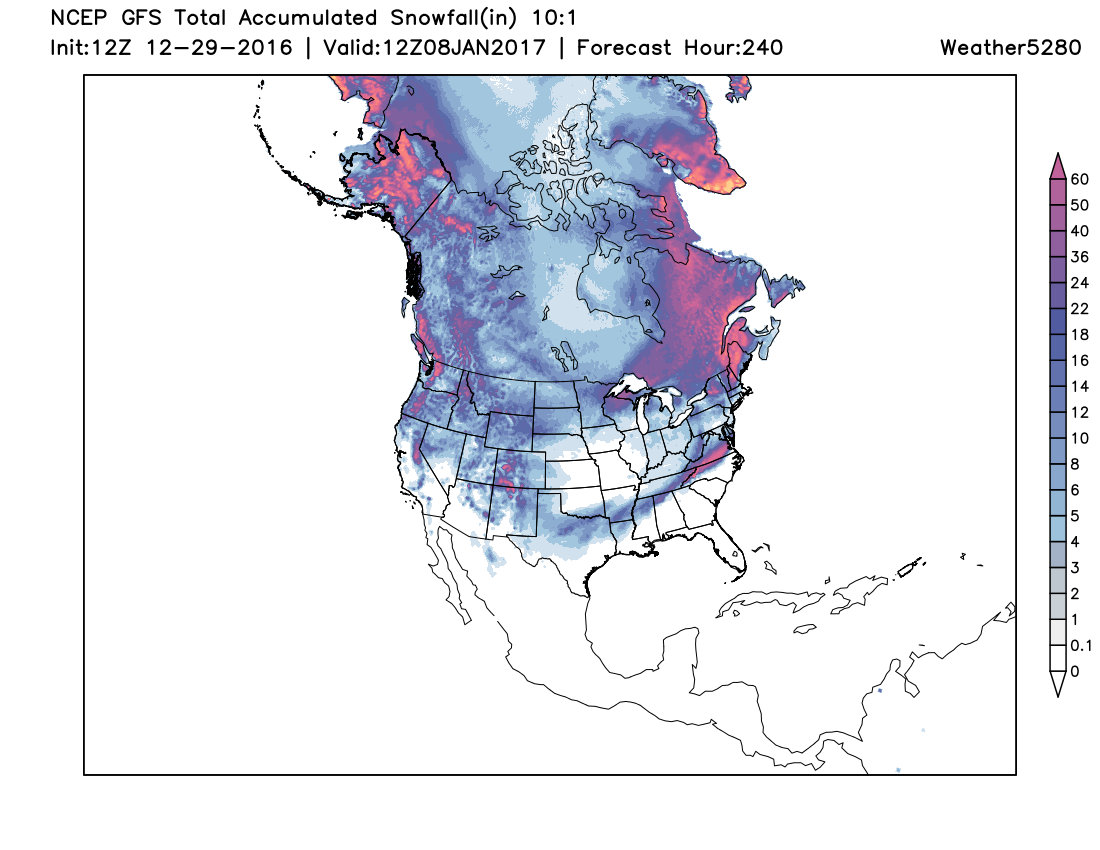