A Look Ahead as Record Warmth Continues Across Eastern Colorado

Just after noon today we were sitting in the mid 70s across the greater Denver area. The record for the date is 70°F for Denver, which we've already bested by 3° officially at Denver International Airport this afternoon.

So, is winter over?

The good news is, it's certainly not over in the high country. Statewide snowpack is currently running at 144% of normal (the blue line below) which FAR outpaces any recent year (including the relatively good 2014 season).

The mountains are forecast to see a bit more snow over the holiday weekend, even as eastern Colorado continues to see temperatures WELL above average, with mostly dry conditions (perhaps some rain showers by Sunday?).

The latest GFS snowfall forecast shows this potential through Monday, with the greatest chances for accumulating snow being for the higher peaks of western and southwestern Colorado. 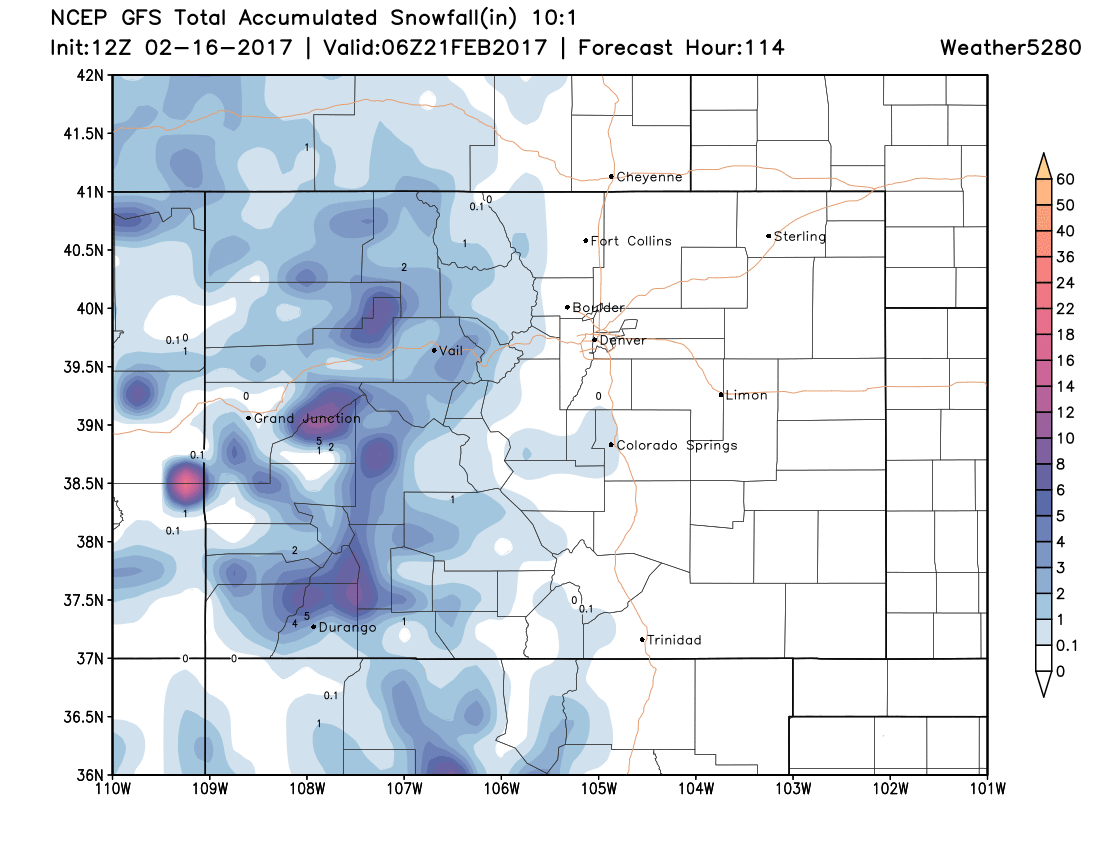 The question, of course, is will winter continue to evade eastern Colorado through the end of February (longer?) or will wee see winter's return before the end of the month.

This is a hard question to answer. It looks like our best chance for snow will come sometime in the 23rd to 25th timeframe, with perhaps another system sliding through as we transition into February. Unfortunately, for snow lovers anyway, neither system appears to be a lock. In fact, models today are virtually all snow-free for the urban corridor through the end of the month.

At the same time, there's plenty of time of that to change, and plenty of uncertainty in currently modeling – especially with the system around the 24th. Last night we saw nearly all of the operational global models bring the track of the low much further south than we are seeing today, which would put the Denver area in a better position to see some snow.

A more northerly route appears to be the favored play at this point, however. Most of the ensembles have been insisting this, and we continue to see more often than not their operational runs remain too progressive and far north for much impact along the Front Range. Here's the latest GEFS mean forecast for next Friday – the blues indicate a system to watch, but you can see that the main 'dip' scoots northeast of Colorado, rather than digging south. 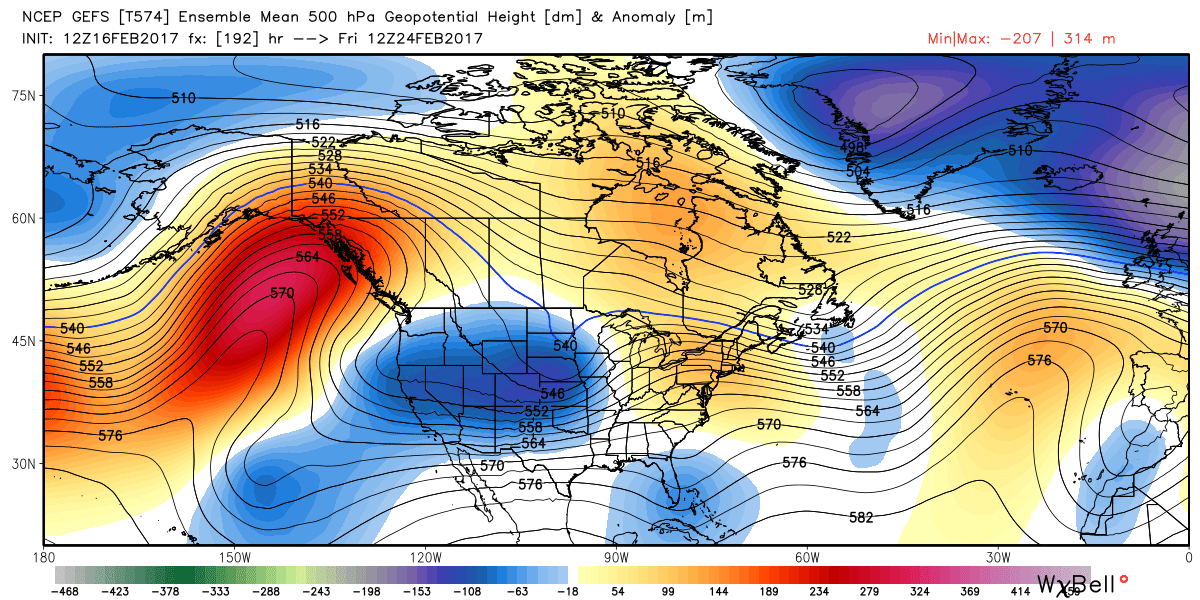 By the end of the month, we see a tendency for the trough to end up a bit more centered across the United States. While this would indicate certainly a colder finish to the month (and start of March), it's not a strong signal for snow across eastern Colorado either. Some quick-hitters along a frontal boundary? Sure, but a good, slow-moving digging trough, perhaps not. 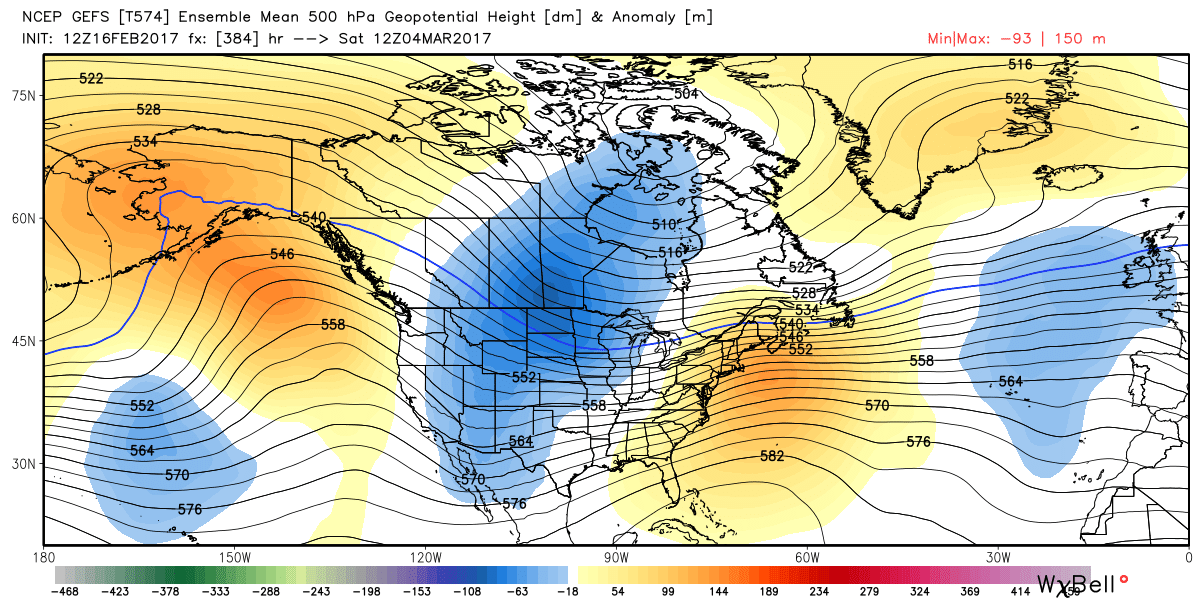 In short, it looks like our pattern gets a bit more active as we head into the middle of next week, and while more mountain snow looks likely through the remainder of the month, what happens east of the Rockies is up for debate. As we saw in December and January, this pattern can deliver, but for all those that missed out – it's quite easy to see how we could get through the next three weeks or so without any snow to boot as well.

For more on the extended outlook, take a look at our recent Insider post as well!