Well, just in case you've been lulled in to summer mode with the recent string of warm weather... today's modeling would say not so fast. Operational models, ensembles, you name it are painting a pretty wet and chilly period ahead as we end April and begin May.

But first, a quick look at precipitation over the last several days as we finally saw the return of moisture across portions of the state to end this past week. As Matt Makens said would be the case, the greatest precipitation from this latest event ended up from Denver north and northeast across the plains. While a ho-hum event for some of the metro area, GREAT to see some moisture up north, and of course always a welcome sight out east. Totals upwards of 1" are denoted in the yellows and reds below: 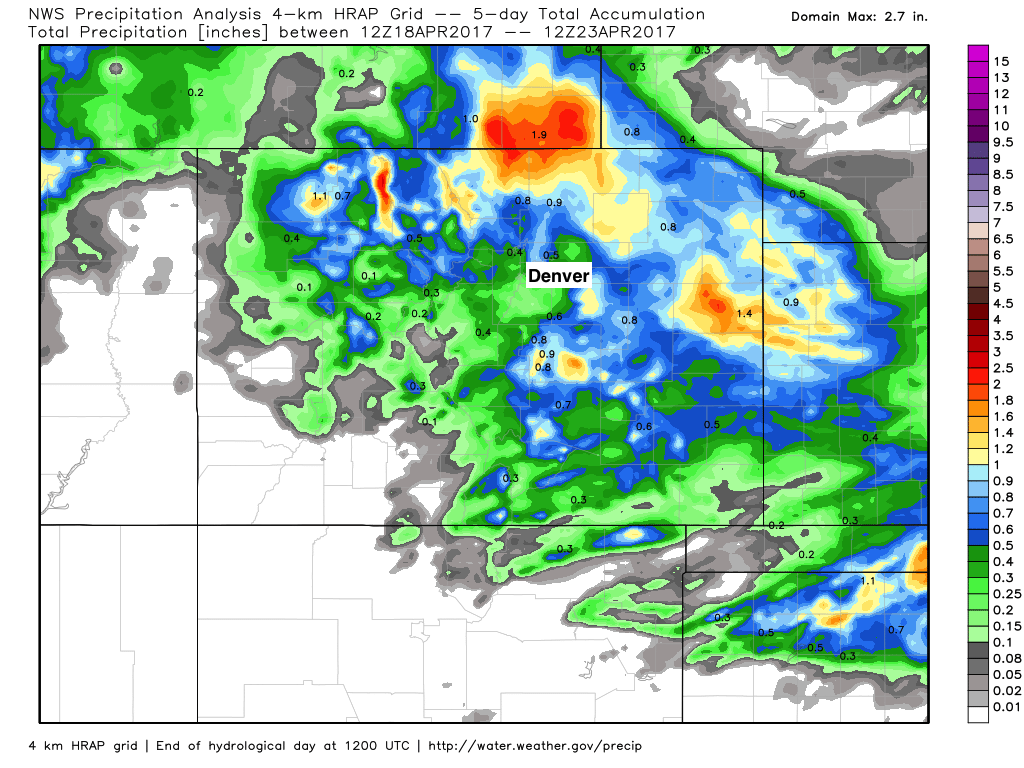 Today we've warmed things up and dried things out considerably, with highs in the mid to upper 70s across the greater Denver area this afternoon. This, however, won't last, as cooler and wetter weather moves in for much of the week beginning later in the day Monday.

The week ahead
The week starts out pretty amazing, with MOS guidance forecasting highs in the upper 60s and low 70s across the region for Monday. By later Monday afternoon we start to see the next changes arrive, with highs only managing the mid 50s for Tuesday and a chance for showers returning to the forecast as well.

This will be the theme for the remainder of the week: chilly and unsettled. Below is a look at the GEFS 12z forecast. This is the forecast of the 20 GEFS ensemble members. In the top chart you see temperatures forecast – red is the mean temperature forecast, the boxes the spread. As you can see, good agreement that temperatures will steadily cool through the end of the month. On the bottom we see lots of green showing up, not clear patterns really, which suggests a period of wet weather, but varying degrees of "how wet" depending on which ensemble you look at. 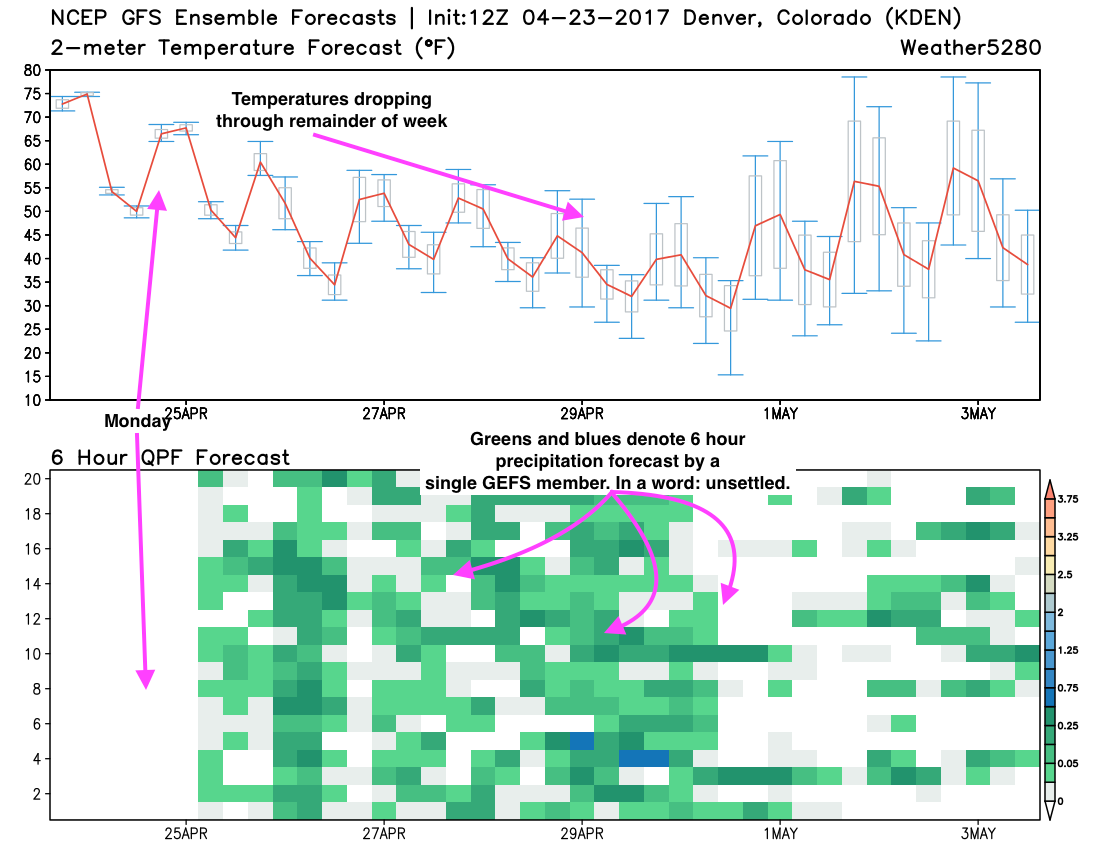 While it'll be cool this week, we should remain warm enough for all rain at lower elevations through about Thursday. If you live in the foothills to the west, or at higher elevation to Denver south/southeast we could see some snow mixing in from time to time, but accumulation chances look relatively low at this time.

It's Friday and on into next weekend that we'll really need to keep an eye on things... as models today continue to key in on the potential for snow, even at lower elevations. This morning's probabilities looked pretty low for Denver despite some rather epic operational runs... but this afternoon we've seen those probabilities come up a bit. Of course this is a very long time out, and we'll be creeping up on May by this weekend... but snow this time of year (and on into May) is never out of the question.

All models and their ensembles are currently showing a strong closed low impacting the state for next weekend, but how that eventually impacts our weather (specifically) will be one we'll just have to watch over the coming days. I can tell you that most of the operational snowfall numbers at this time aren't all that believable, but could we perhaps see some snow by late in the week? Perhaps. Could it be significant? Also not out of the realm of possibility. Unfortunately, after weeks of warm weather leaves are very much so leafed out right now in the city, so this one will be a hard one to root for. Precipitation? Yes please. Snow? Maybe not. 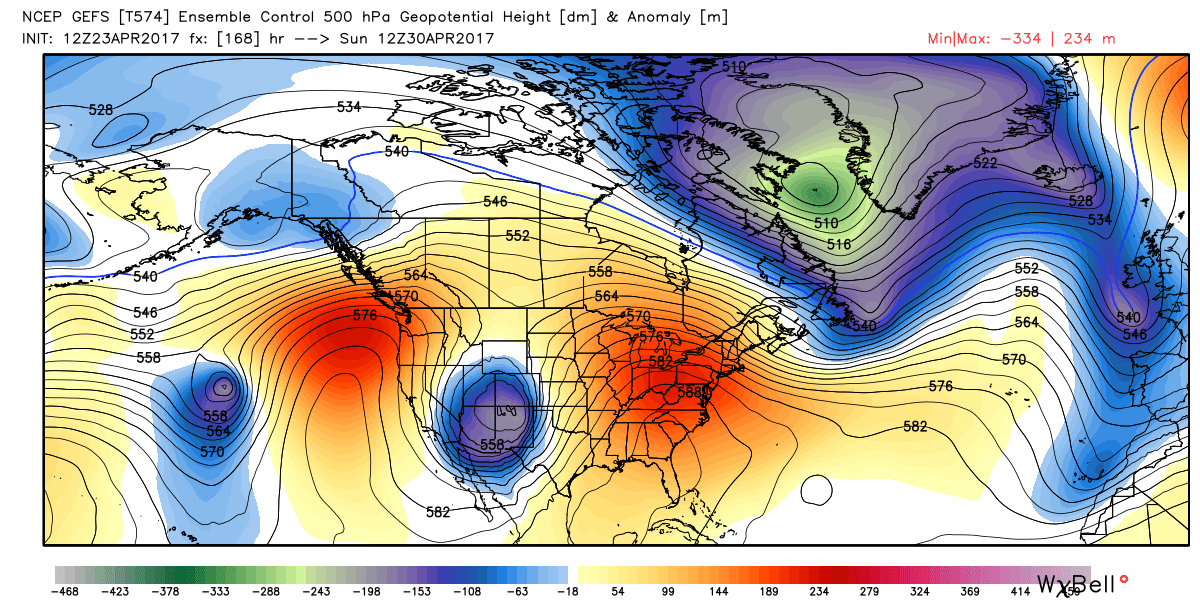 In any event, expect a period of wet weather for much of the state, especially across eastern Colorado. The 10 day 12z GFS precipitation forecast looks like this, which without getting caught up in specifics looks pretty wet across the state: 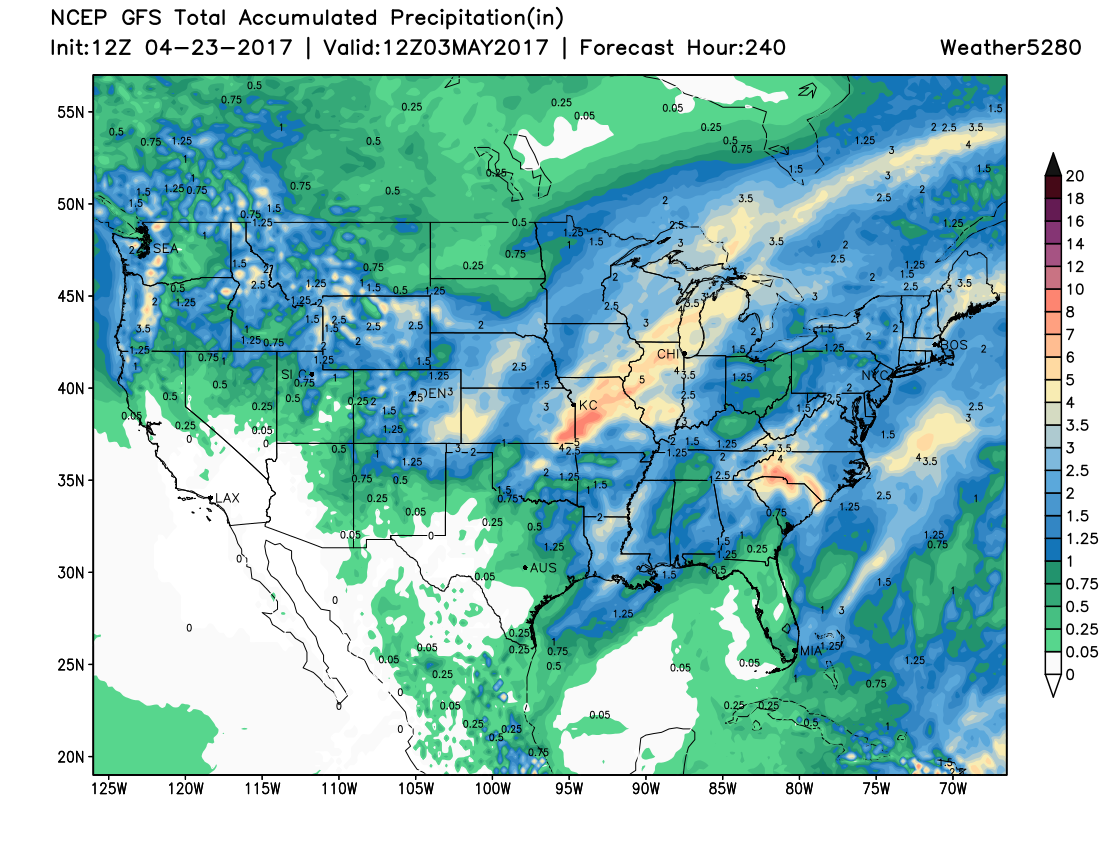 With temperatures centered around next weekend looking quite chilly for us. Here is the GEFS 5 day ensemble mean temperature anomaly forecast for next weekend. Blues and greens indicate forecast temperatures below normal for this time of year: 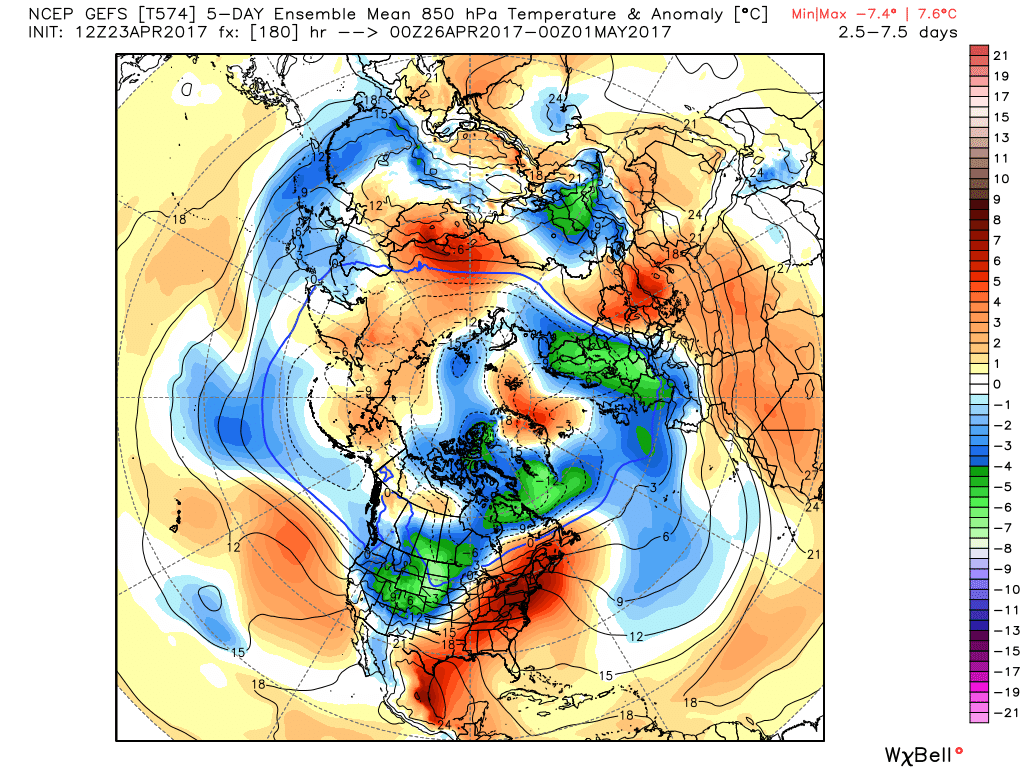 For now plan on a mostly nice Monday, followed by a cooler and unsettled work week. Shower chances will come and go, but overall things will feel damp around here. We'll keep an eye on the end of the week and see how things shake out with that closed low.