We are clearly in the midst of a very warm stretch of days. With highs in the middle and upper 70s, Monday through Friday of this week is much warmer than the seasonal average of middle 60s. We have been part of a ridge of high pressure affecting the SW US and that pattern returns after a very brief hiatus this weekend.

As of late Wednesday, colder temperatures were collecting in western Canada. This, part of a developing storm system creating some showers for western Washington and Oregon. Watch as that area of cooler temperatures sinks over the Rockies and pushes through Colorado this Saturday.

That blue coloration represents temperatures 5 to 10 degrees cooler than the average. This will push the Denver area temperatures into the upper 50s and lower 60s for highs Saturday.

That pool of cooler air is moving through in an atmospheric trough that isn't particularly strong but is stronger than projected when we discussed this system with the Insiders last Sunday. 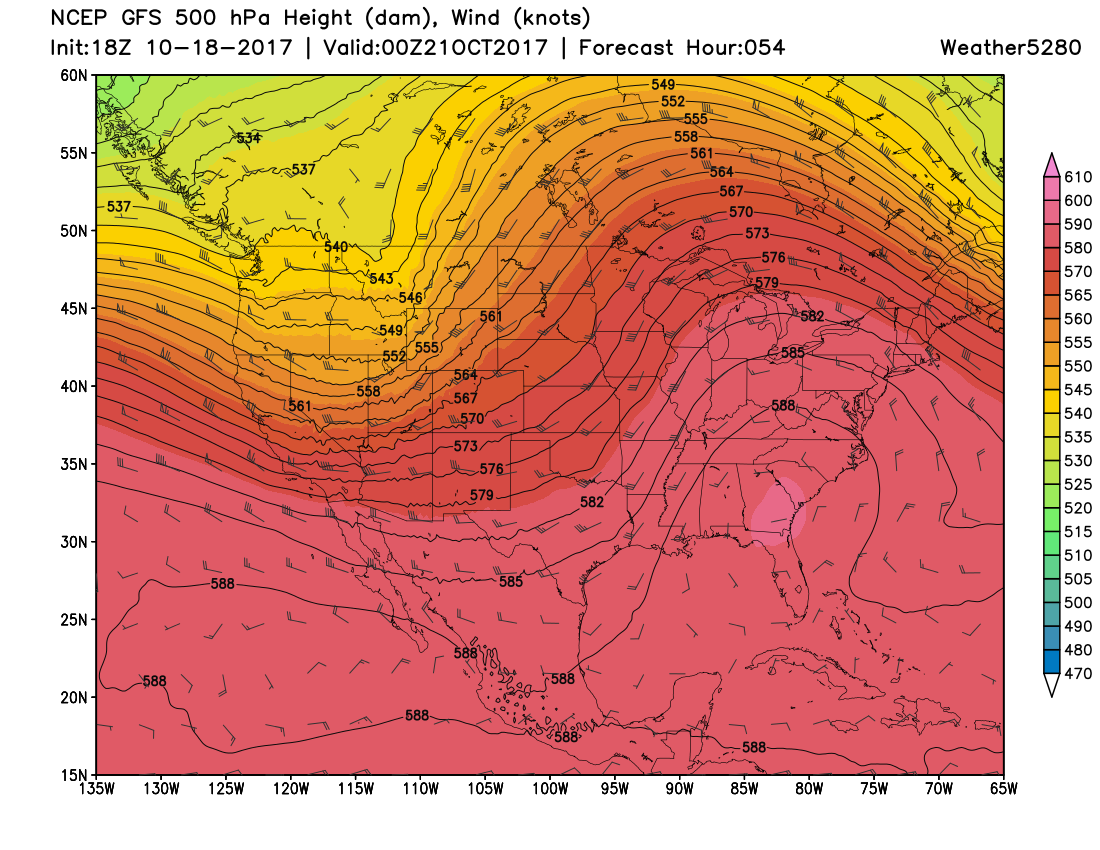 And then, by Sunday evening that same trough is east of Colorado: 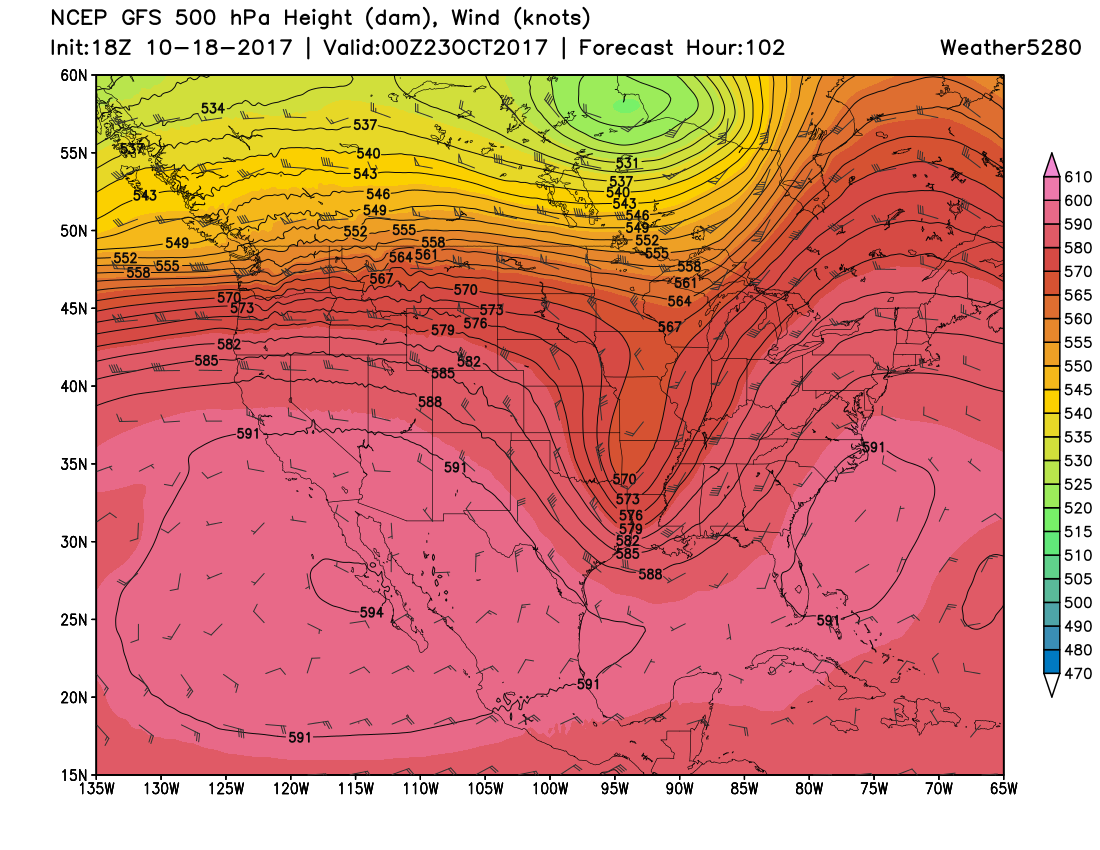 This quick passage of the trough limits the impact of the previously mentioned cooler air, and also the chance of rain and snow as I'm about to discuss.

The trough impacts the western half of Colorado late Friday through Saturday morning with areas of rain and snow, not to mention gusty wind and cooler temperatures.

The amount of snowfall and rainfall is extremely dependent on mountain range. This system is moisture starved so needs a lot of lift to overcome the dryness. The source of added lift will be the northern mountain ranges, and particularly their western facing slopes. Further, with the arrival set for the overnight period, the temperatures will produce mostly snowfall (rain in the lowest valleys). Here is the amount of snowfall determined by the GFS. I would lean toward a bit more than what is indicated here as GFS is drier than I believe will become reality: 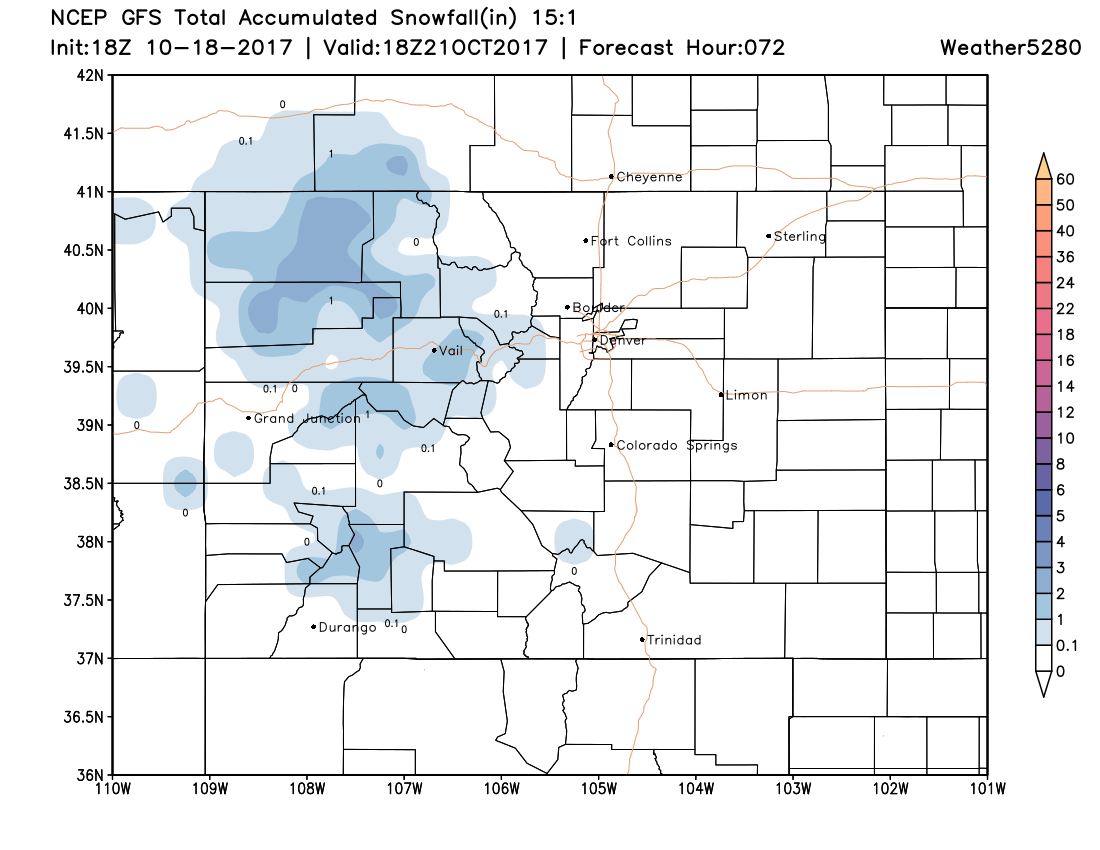 Turning now toward rainfall and the trough's impact on the eastern half of the state.

The trough will likely pass during daylight hours Saturday. As it does, Denver will feel wind gusts and that temperature drop. The chance of rain is low, almost bleak. You see, we've lost that key element of this particular system -- lift (no air moving up on terrain for the metro area).

Without the lift, we will struggle to squeeze raindrops or snowflakes from the bit of cloud cover that moves through. I think GFS is more "on it" with this total precipitation projection through Saturday night:

*Squint to see the 0.01" to 0.05" light gray color shading that spots those of us east of the mountains. 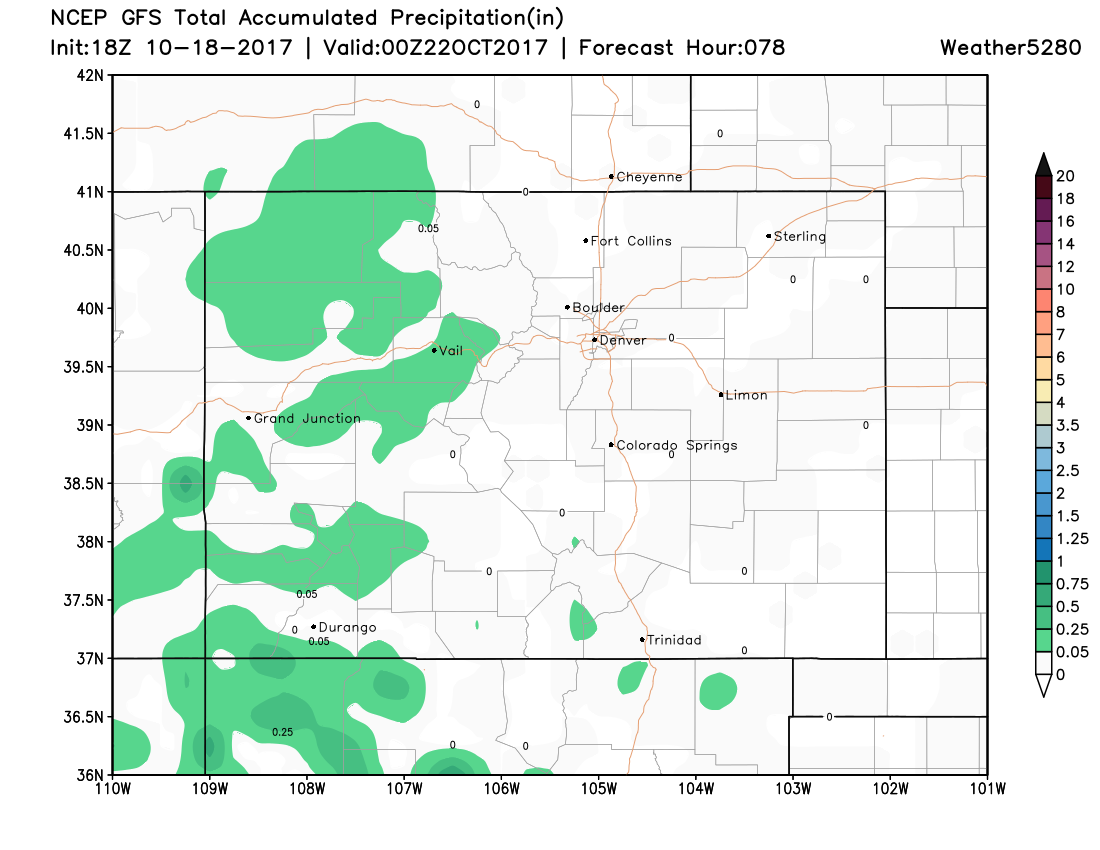 Should this trough slow a bit I don't foresee any changes to make for the mountains, however, we will need to add a chance of snow to the Denver forecast late Saturday once temperatures have cooled and the few pockets of rain transition into frozen form.

Should this scenario play out, it will be possible to have some minor snow accumulation within the metro areas - mostly on the Palmer Ridge between Denver and the Springs. Again, though, to see this change will require a lot of change to the system which isn't all that likely.