As it turns out, that probability map from the EURO we shared last week was spot on. Most of us from the Palmer Divide north have snow on the ground today, after a beautiful snowfall Saturday evening.

As we see from time to time, the jet really came through last night in helping to deliver some moderate to heavy banded snowfall along the urban corridor. While most locales ended up in the 1 - 2" range, those that saw the heavier bands picked up a quick 3 - 4"+ as the jet sagged south. At our station in Denver we picked up 1.3" of snow, while DIA recorded 2.3" of snow.

Models really struggle in forecasting these events, especially modeled snowfall. The 3km NAM actually did a pretty good job, especially when considering these are 10:1 ratios and we were certainly higher than that. Below is yesterday morning's run followed by the evening run. We see in both the streaky snowfall totals spreading off the foothills and across the northeast plains: 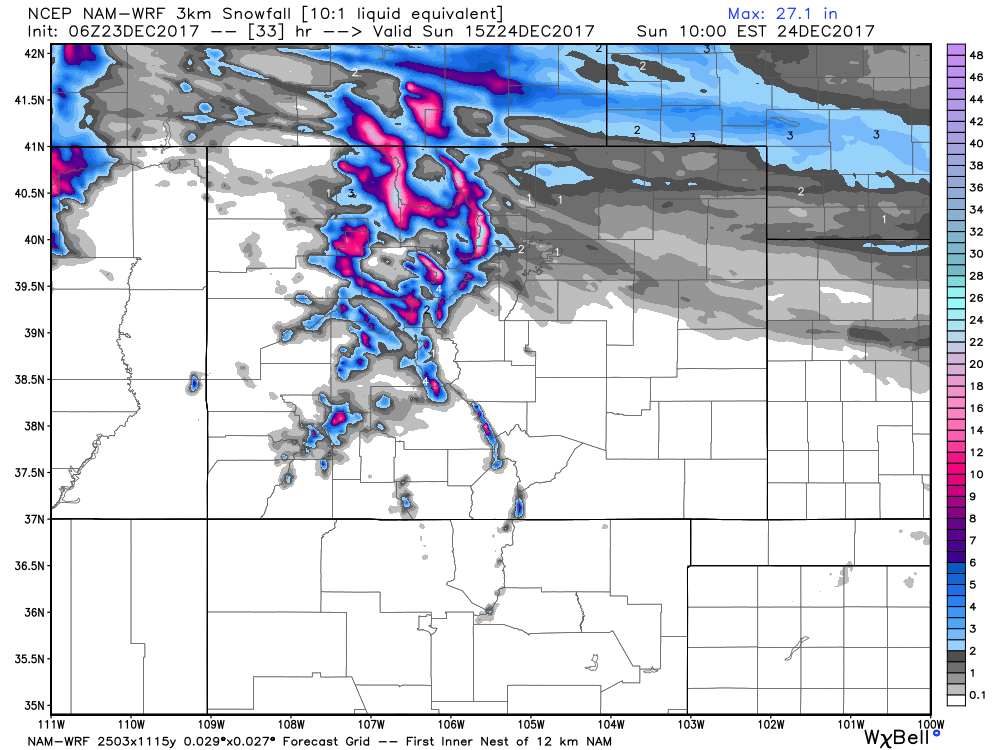 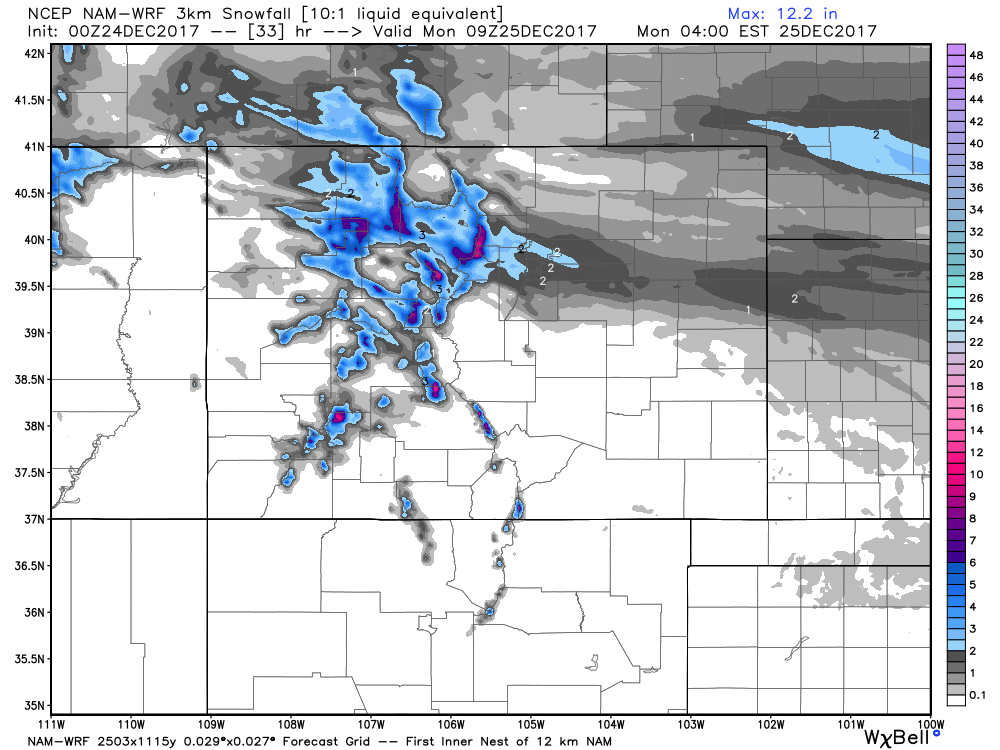 In all, our forecast worked out well in most locations. We ended up a bit low where a few heavier bands set up, and despite mentioning the jet interaction several times in recent days, we could have driven the potential home a bit stronger in the final update. Nonetheless, below are reported totals from across the area with the latest round of snow that moved through yesterday. Note the two main bands of heavier snow – one north of Denver (but further south than we had placed it, giving Fort Collins the greatest odds with a 1 - 4" range), and one south of Denver across the western Palmer. It looks like the NAM (above) really caught on well in the end! 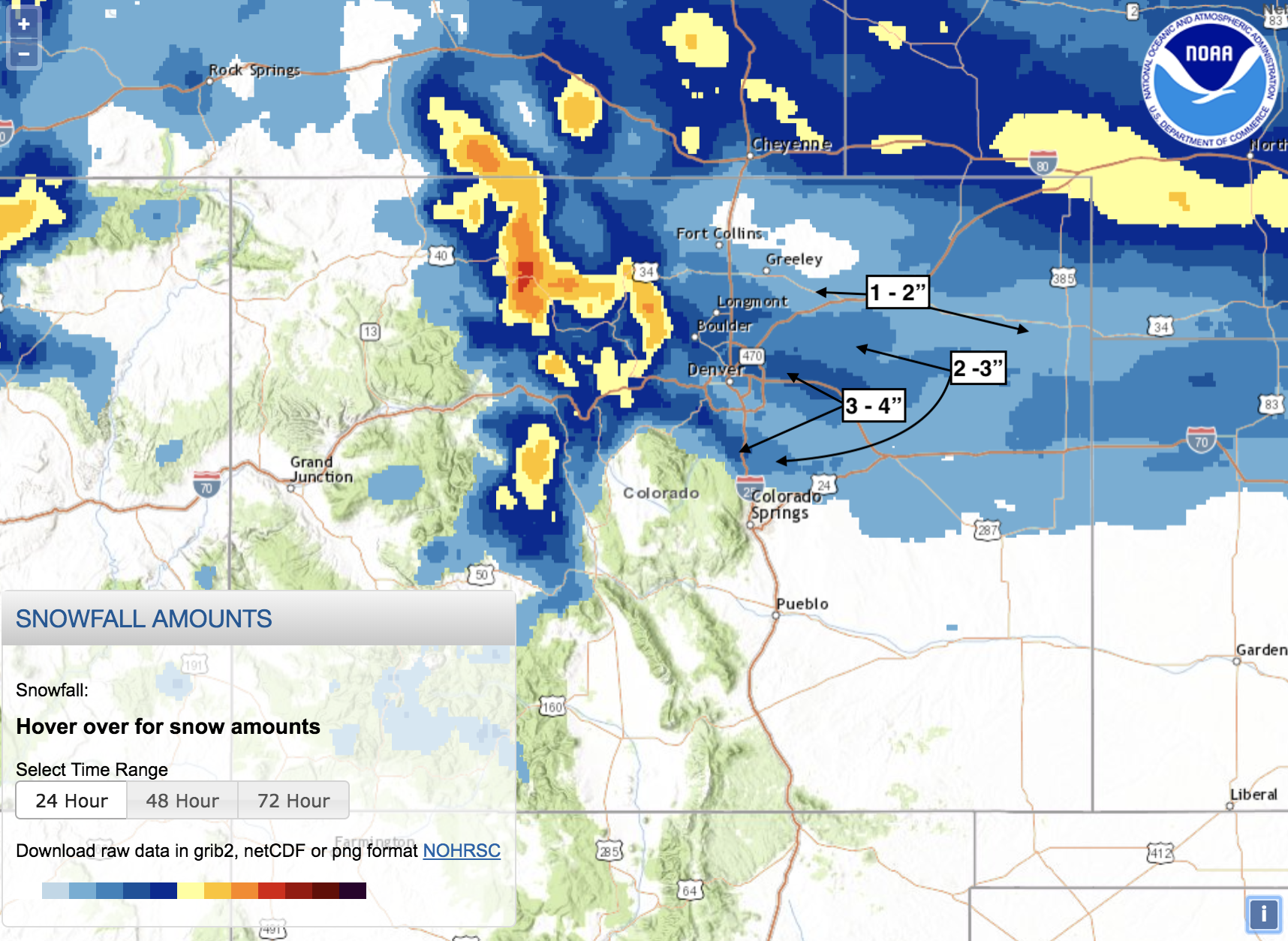 We aren't quite done with the snow in the high country as Winter Storm Warnings will go into effect this evening and remain in effect through Monday across the northern and central mountains. Snowfall totals in the 8 - 16" range will be likely, with locally 20" possible before snow ramps down Monday night.

This next disturbance won't be able to produce quite as much of a snow threat to lower elevations as the one last night. That said, certainly wouldn't rule out some snow showers across the plains Monday afternoon/evening, especially north of Denver (Fort Collins to the border) and extreme northeast plains. In Denver those chances will be much lower, but temperature will be chilly on Christmas day, with highs near freezing expected.

Here's the NWS snowfall forecast which shows the snowfall potential Monday/Monday night across northern Colorado. Totals should be light, but perhaps a coating to 0.5" in a few spots? Some impressive totals for the high country, however: 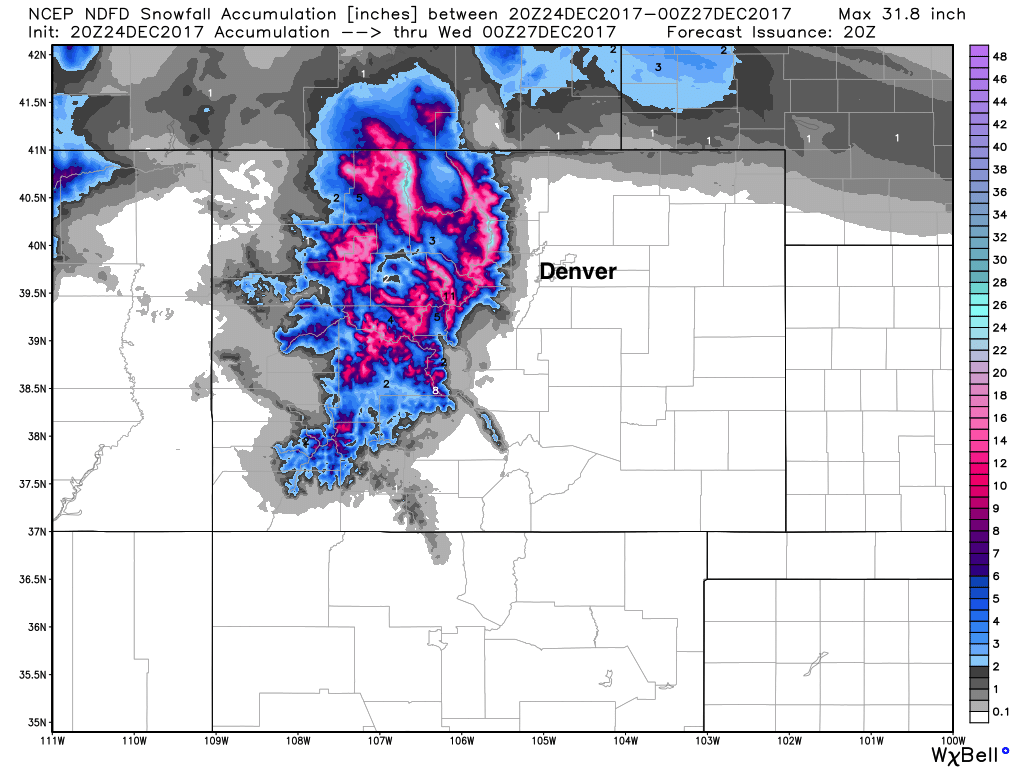 The flow through the remainder of the workweek remains out of the west northwest, with embedded disturbances bring the possibility for more snow at higher elevations at least.

Down low the rest of the week for the moment looks mostly dry, but we'll need to keep an eye on things. Look for temperatures mainly in the 40s, with overnight lows in the teens. Again those colder temperatures won't be too far away, so will need to watch that nothing sneaks in.

Next weekend
As we head into New Year's Eve we'll again need to keep one eye on the forecast. Models continue to show yet another very cold airmass dropping out of Canada by next Saturday, and at times have shown some snow associated with that front. Still a long ways to go, and more often than not models show this as a glancing blow to the state (and dry for Denver) so a little heads up on what we're watching, but nothing to change your plans around just yet either.

Overall the long-discussed cold pattern for the year will continue to unfold across the country, though the local impacts look to be not as extreme. The average temperature anomaly from the EURO for the next 10 days shows just how cold the eastern half of the country will be to end the year. As you can see, Colorado will be split with above average temperatures to the west, and below average to the east. The urban corridor once looked to be much colder, and not looks to see a split of warmer and cooler days to end the year. 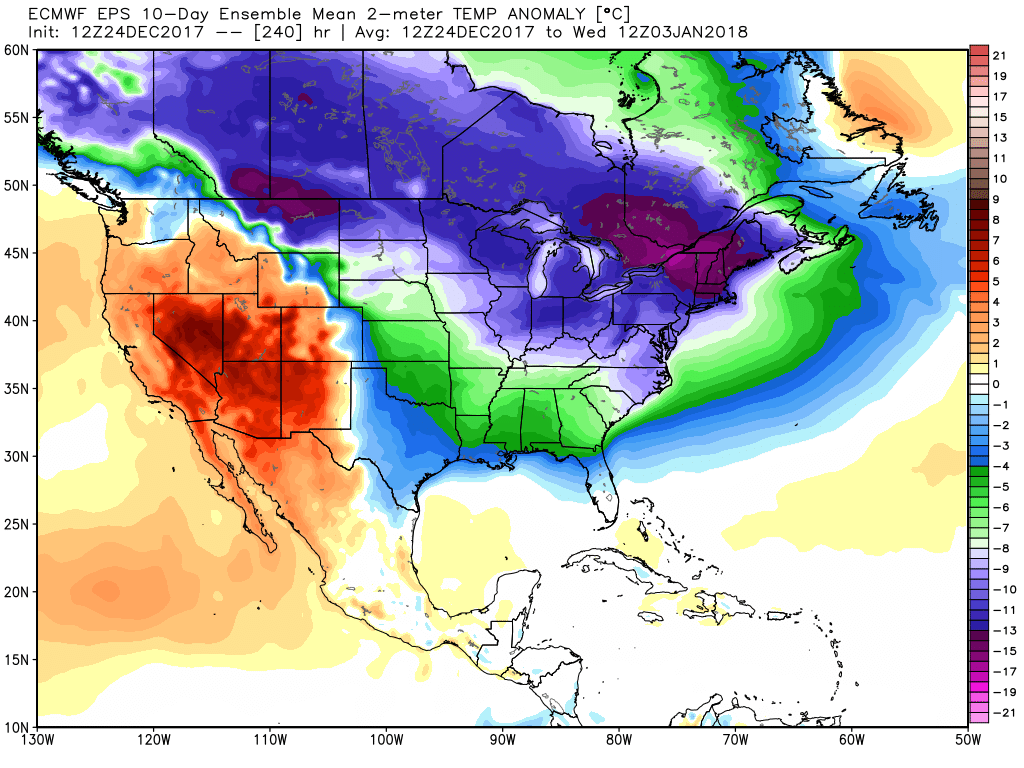 Meanwhile, the 10 GFS snowfall forecast certainly looks like winter across the United States – and if you look closely, even shows some light snow across eastern Colorado. Perhaps we'll get lucky. 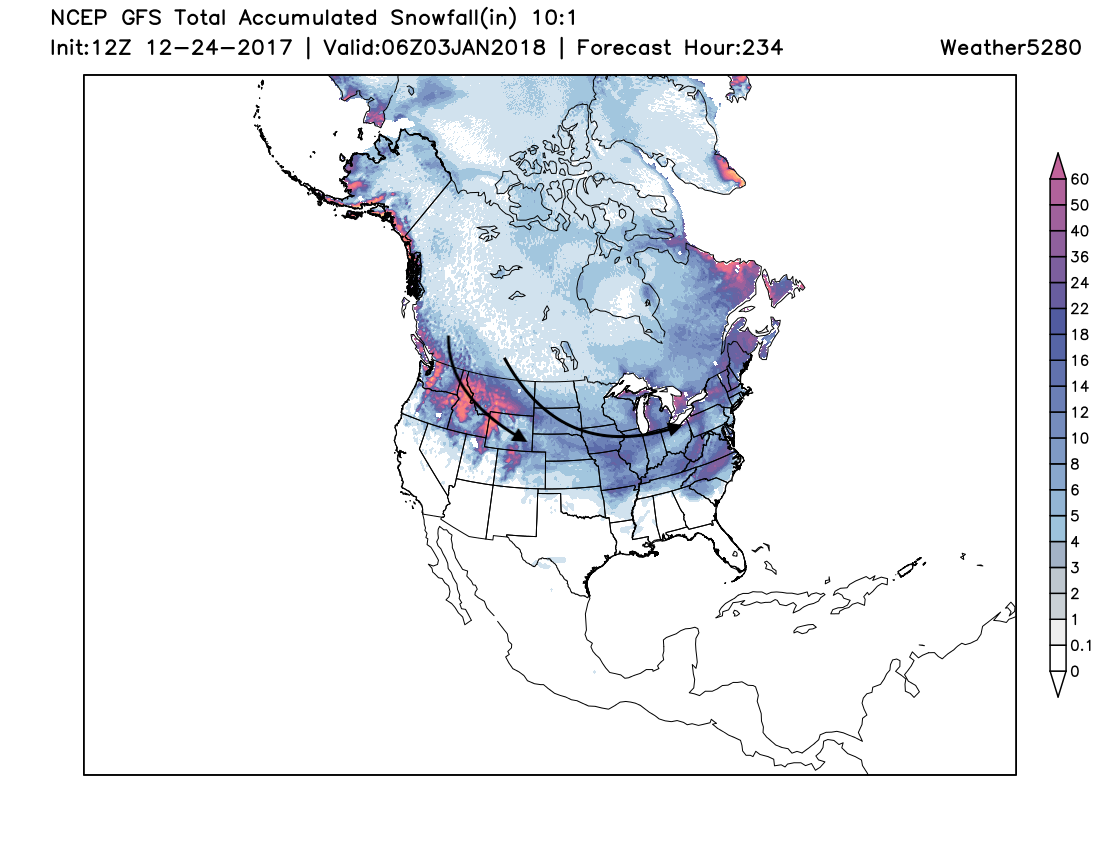