Fall has arrived, and by Tuesday it might actually feel it across eastern Colorado.

Temperatures have climbed into the upper 80s across the region this afternoon (88°F so far for a high at our station in Denver), but cooler weather on the way.

Tuesday will feature highs in the upper 70s to low 80s in Denver, followed by a markedly cooler day on Tuesday, with daytime highs in the 60s for the city. GFS MOS guidance has a high of 66°F in Denver on Tuesday, with the NAM MOS topping out at 62°F. Either way, the day should feel quite fall-like, especially after the recent heat.

Unfortunately, the associated front looks pretty dry. In the chart below from the ECMWF model we see the first blue bar indicating tomorrow's rain chance, but the "total precip" below hardly registering anything. Perhaps we'll see some showers as the front moves through... but only about a 10% chance for that right now, and totals shouldn't amount to much for most locales. 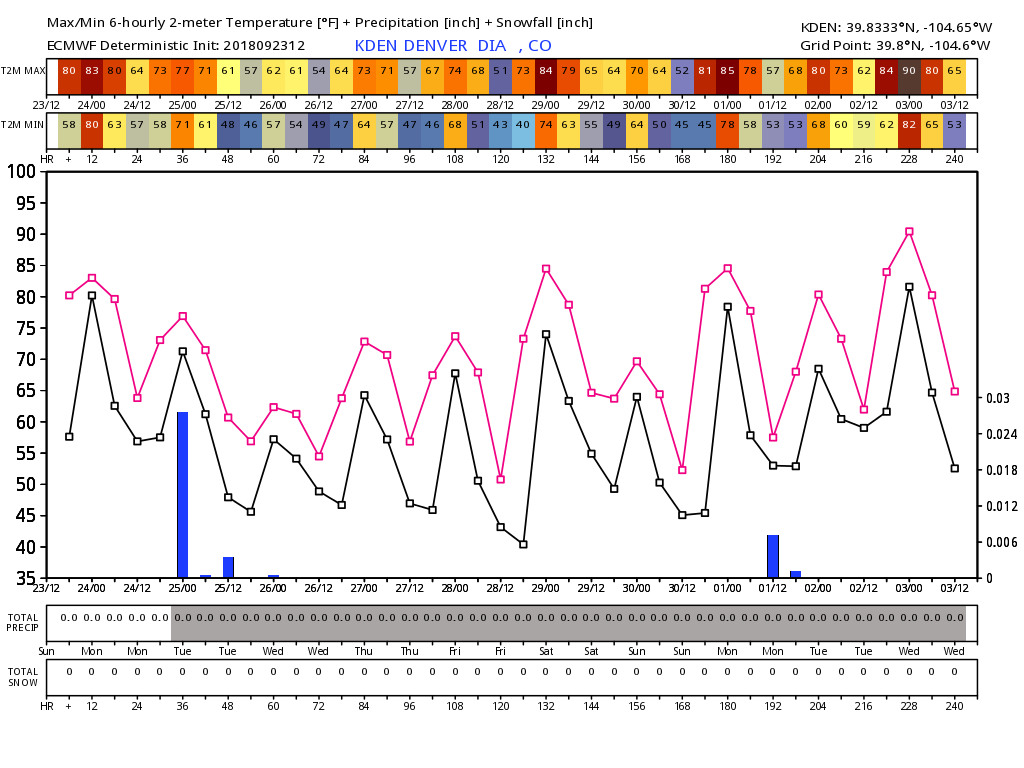 This is confirmed by the last 3km NAM as well. Its 60 hour precipitation forecast shows some spotty activity across the state, but mainly of the light variety: 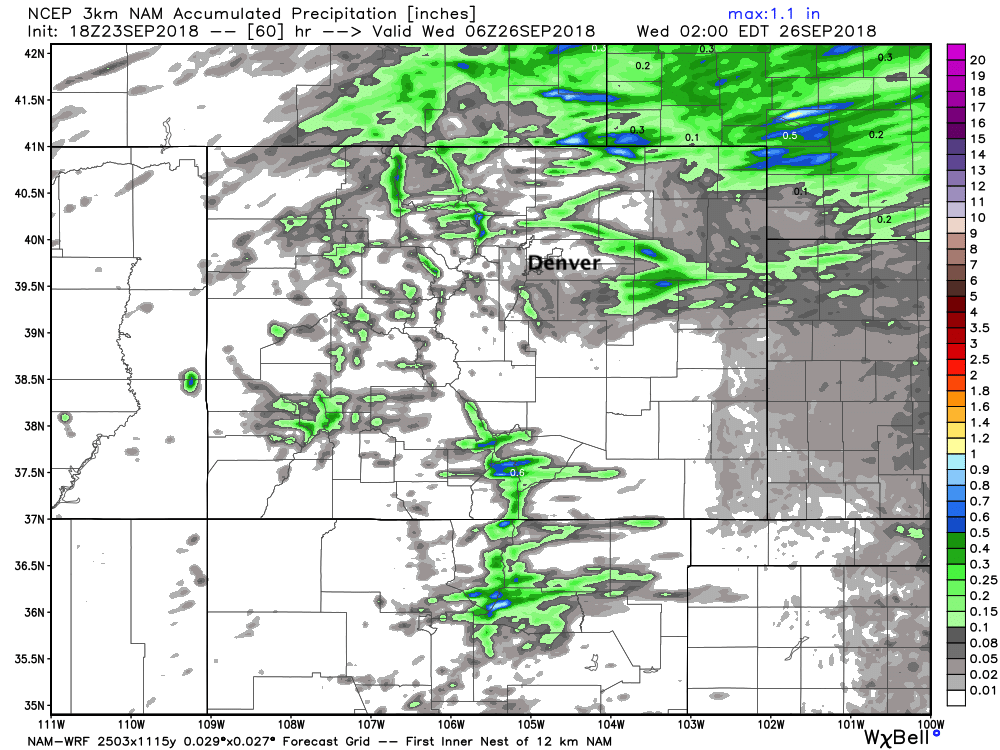 What we see instead are a few cooler days for the middle of the week, before perhaps warming again into the 80s by Friday and Saturday. The deterministic model (shown here) also shows lows dipping to near 40 degrees by the latter half of the week, before gradually warming next weekend and into next week. Possible certainly, but for now we will hedge lows a few degrees warmer in the city. Some chilly fall nights on the way this week either way!

Aside from the temperature relief, hard to be too excited about all that much in the medium range. The next 10 days from the EURO feature quite a bit of cold across the north, but temperatures closer to average along the Front Range through the period with a few cold fronts to contend with, but some warming in between: 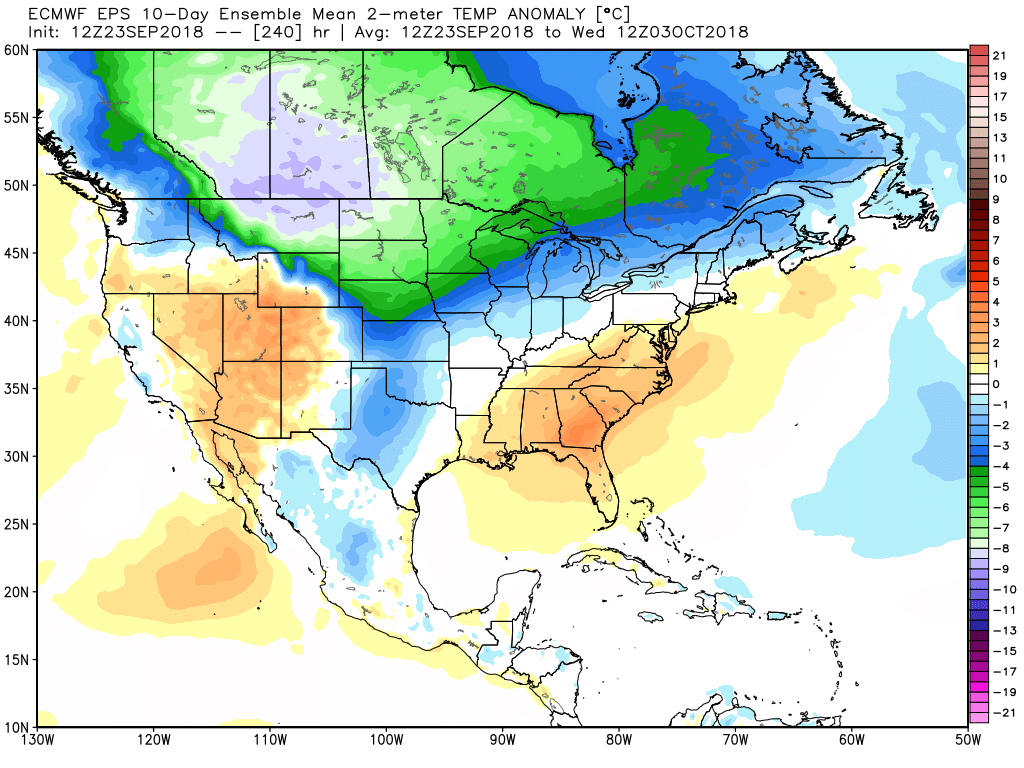 For moisture, just not a lot to hang our hat on either. Dry anomalies for the next 10 days or so, with the moisture locked up across the north, and then well east of us where the cold from the north battles the southeast ridge: 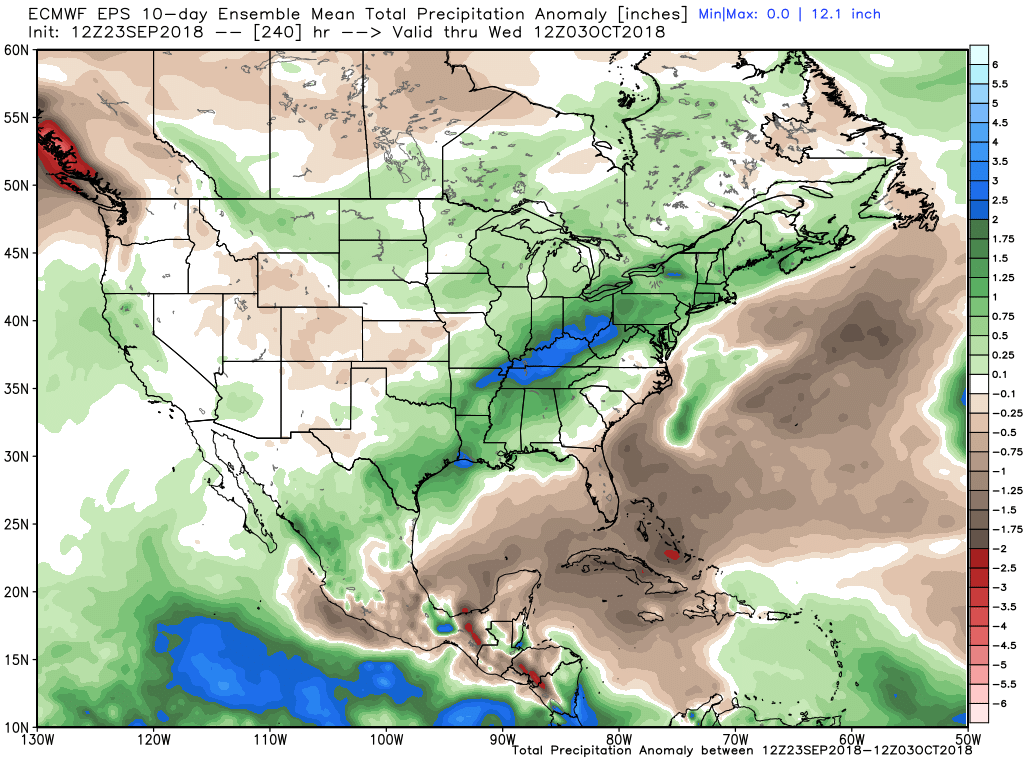 Other notable features to keep an eye on... finally some moisture for northern California and western Oregon over the next few weeks (!), and we continue to keep an eye on the eastern Pacific in case any tropical moisture tries to sneak up this way as we near October. That water isn't nearly as anomalously warm as it once was (and cooling), but models continue to try from time to time. Even in the precip anomaly map above we see the EURO trying to sniff something out, with its tropical storm probabilities showing some activity during the latter half of its run as well: 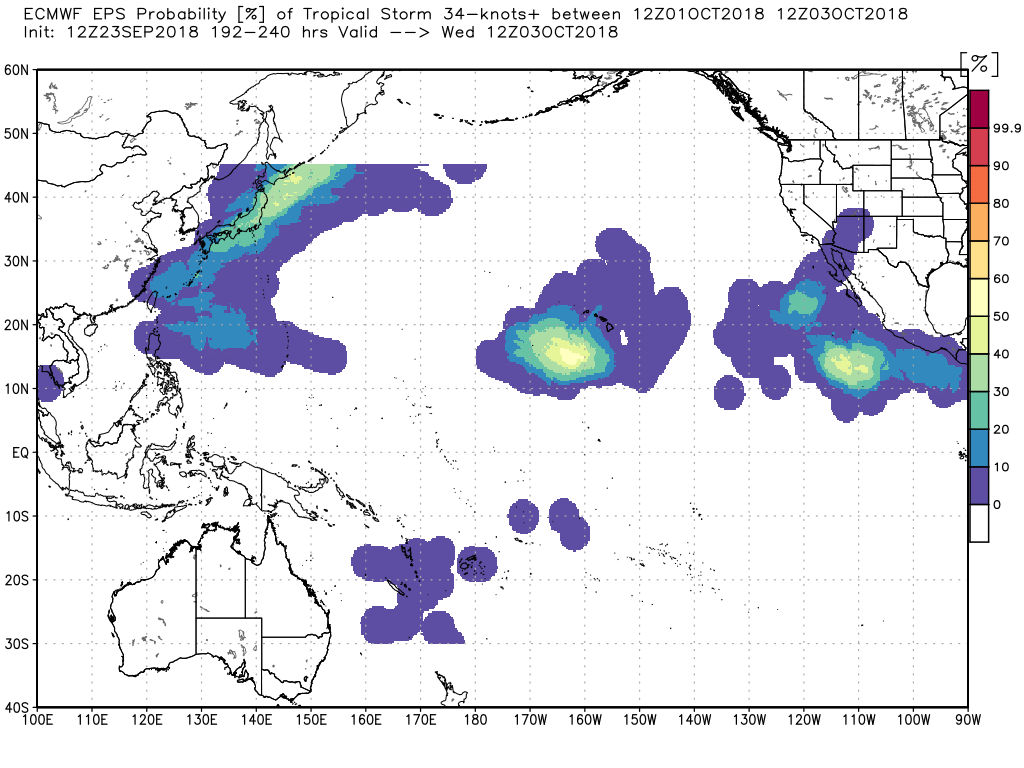 In all, the outlook from the EURO seem to fit the pattern. The MJO is waking up and heading into phase 8 and 1, which this time of year show warmth across the southeast, and a cooler pattern for the northern tier, and perhaps western U.S. by end of month. Phase 2 could come down the road and warm us up a bit for some of October, but also has better moisture coverage across eastern Colorado as well. 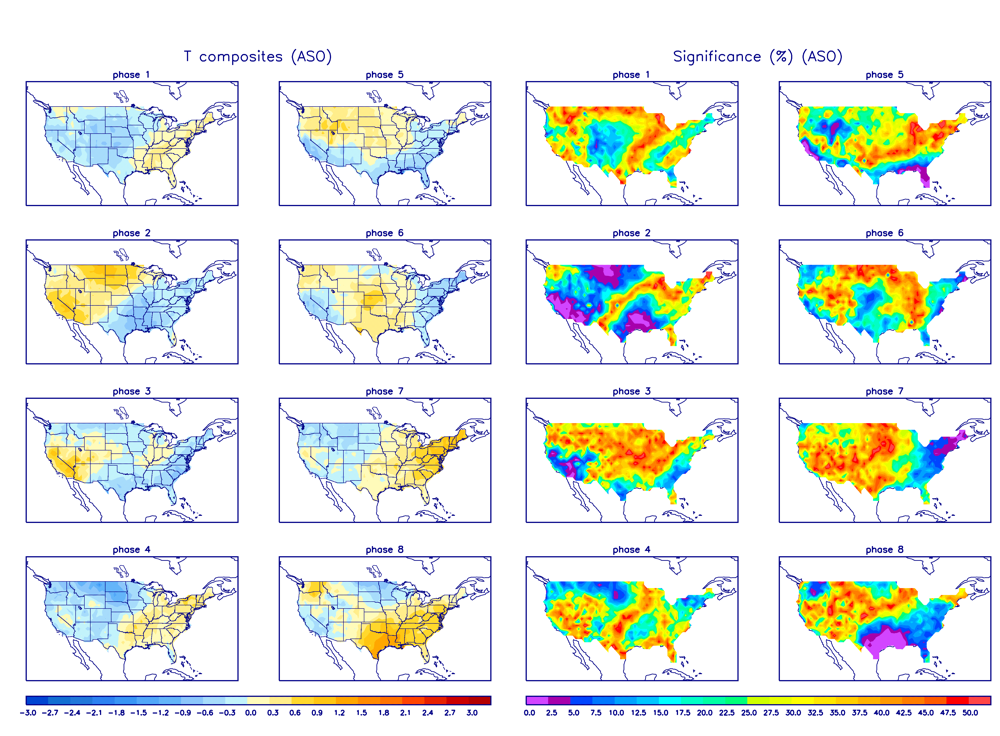 For phases 1 and 8 moisture isn't great across the Four Corners region, but perhaps a bit more of an optimistic look for the northern half of Colorado. Perhaps some tropical influence helps buck this. 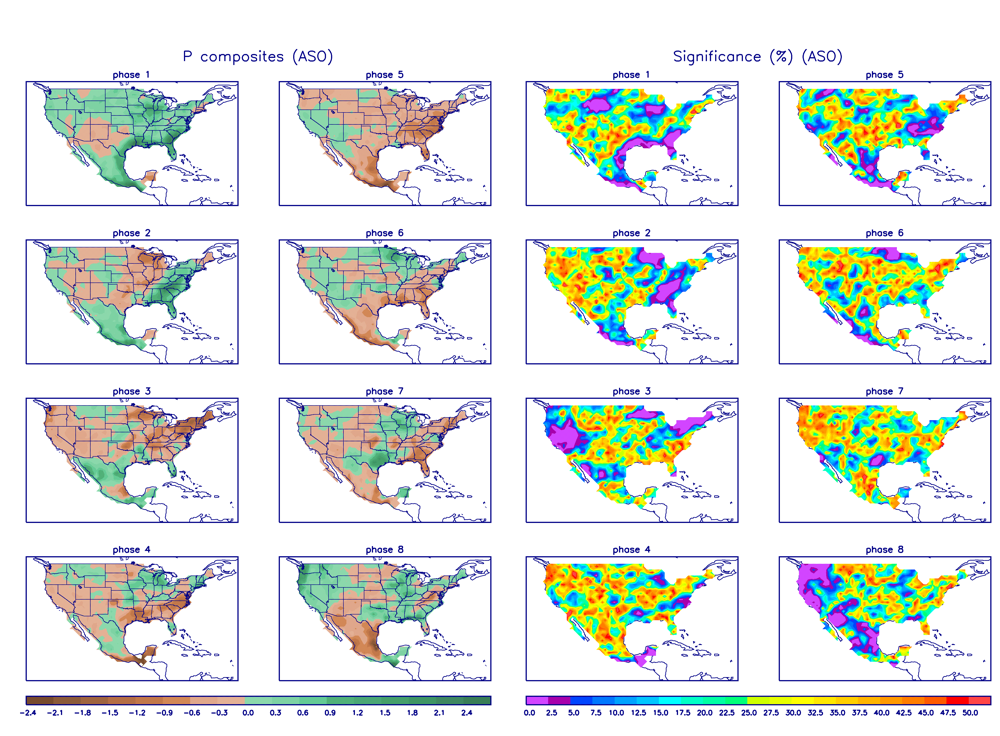 The 5 to 15 day temperature departure from average outlook from the CFS certainly looks phase 8 and 1 -ish, doesn't it? 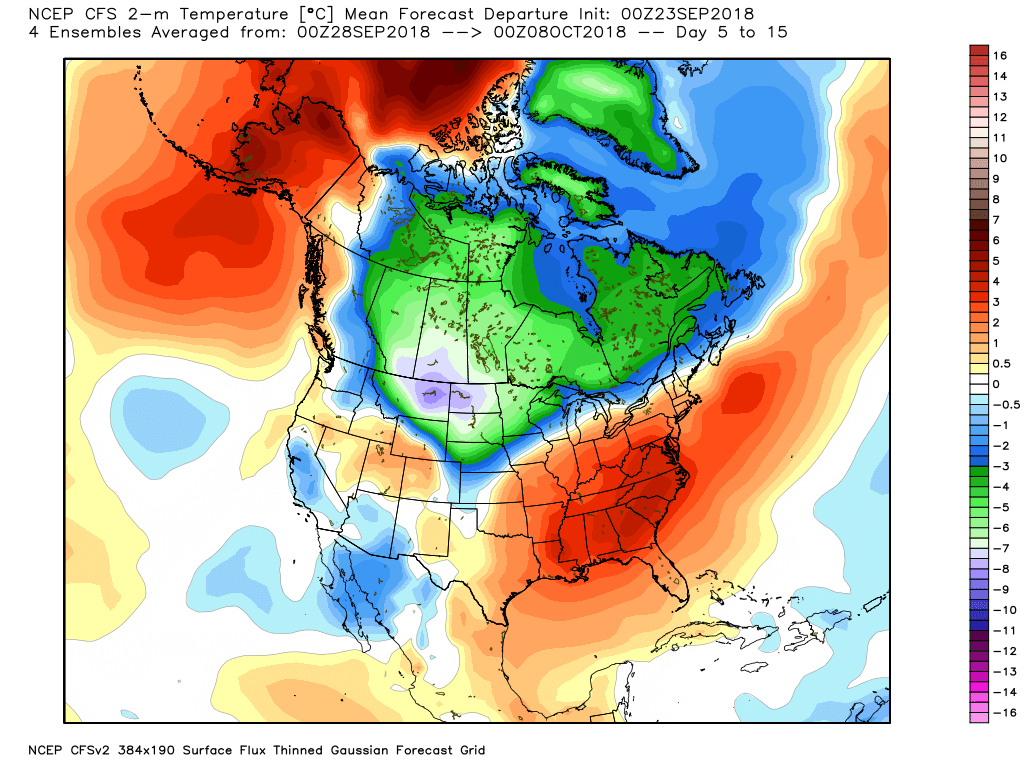 A lot to watch.