The State of the Atmosphere: Sunday, September 30th, 2018

Biggest story over the upcoming week will be what happens with hurricane Rosa as it weakens, moves into the southwest, then eventually tracks its remnants northeast across Colorado. We discussed this in yesterday's update, and see very little need change to the thoughts offered there today.

Heavy rain will be a concern across the Southwestern United States over the coming days. The WPC excessive rainfall outlook for Monday shows the main concern over Arizona:

But by Tuesday the Slight Risk for rainfall exceeding flash flood guidance expands into western Colorado, where some Flash Flood Watches are already in effect:

Below is a look at the 3 day rainfall totals forecast by the WPC. Pretty remarkable totals across much of the southwest, extending into western Colorado. Quite dry across the eastern Plains:

A large trough off the west coast is working to draw Rosa into the southwest, and will eventually move inland as well.

The animation shows more or less where we are headed for the first week or two of October. Note the big ridge across the southeast which will work to keep the plentiful cold air that has been building across western Canada locked up north and west. The mean trough is likely to end up across the Great Basin and intermountain west as we head into early October: 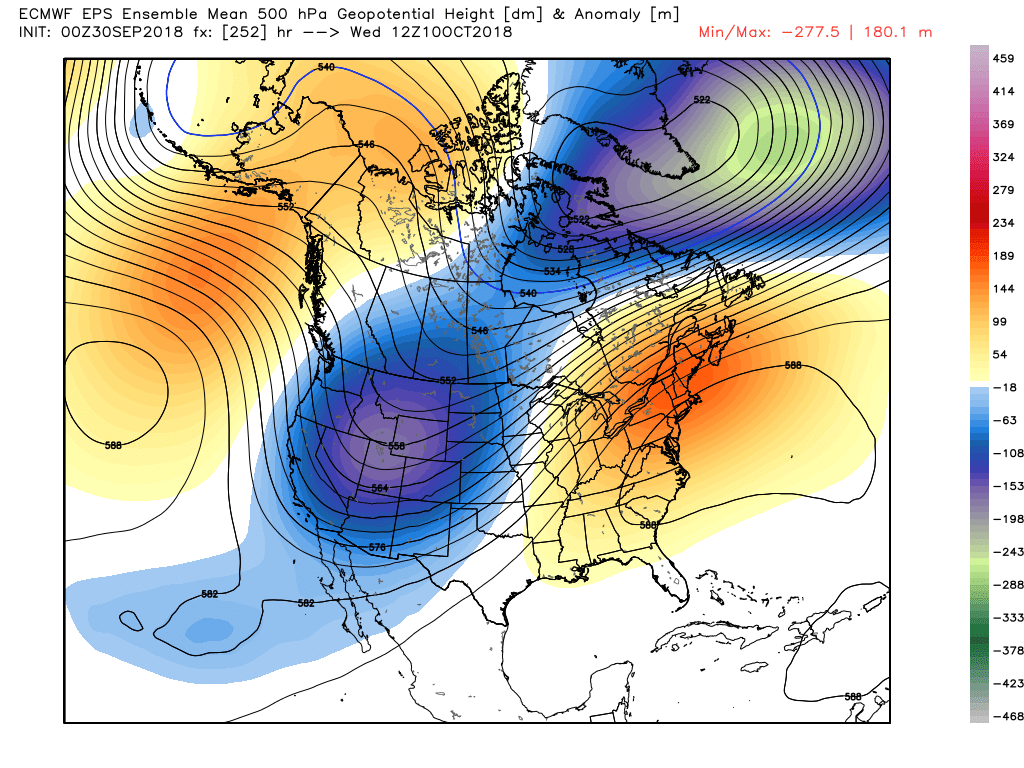 We also see an area of low pressure west of the Baja again in 10 days, which is likely Hurricane Sergio, which could very well trail Rosa in a week or so with impacts as well across the Southwestern United States.

There is decent confidence in the large scale pattern as we start October. The MJO as we discussed last week will be solidly in phase 1 to start the month, which is indicative of troughing and cooler than average weather in the west. We see good model agreement with the tropical Pacific, a strong southeast ridge, and all the while the predicted El Niño continues to find its legs it would appear.

As you might expect from the 500mb map above, a pattern like that in October will deliver plenty of chilly air to the west.

Over the next 15 days we see plenty of wet weather across the west and central U.S. In the southwest much of this is to be attributed to to at least one tropical storm, with the plains and upper mid west being the battle ground between the cold to the north/west, and warm southeast –– not to mention plenty of moisture available from tropical storm remnants: 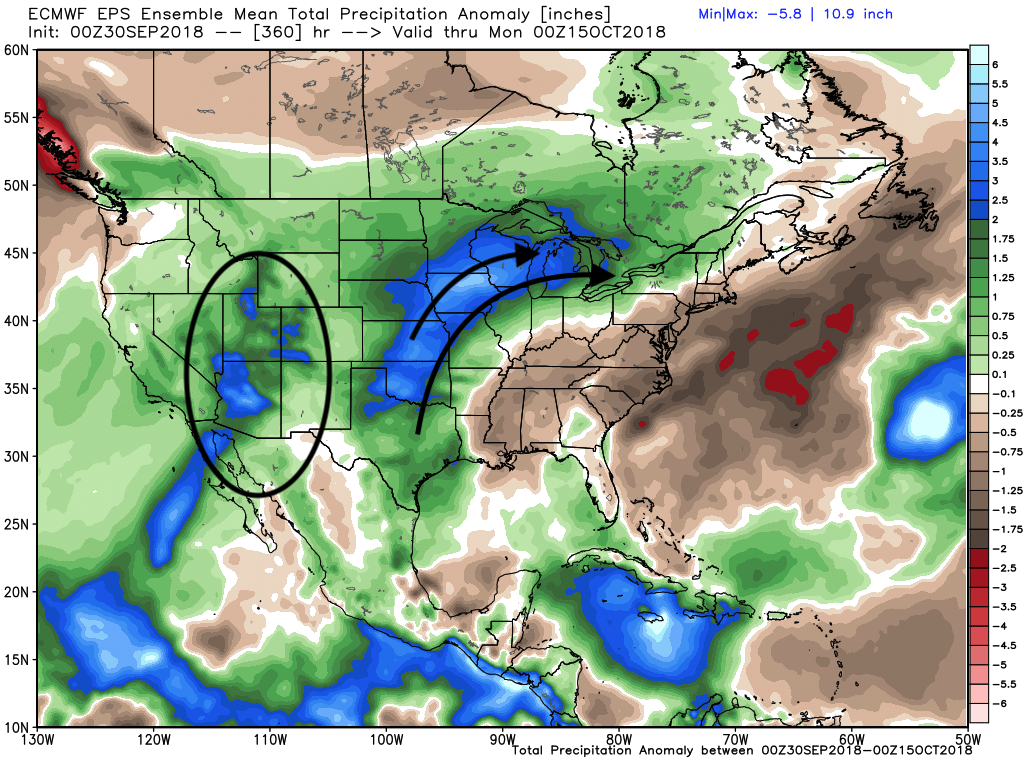 And for a final look at where this pattern may be headed... the temperature anomalies forecasted for the 10 days prior to October 15th show all the cold in the west, the battle ground in the middle of the country, and a warm eastern third of the country: 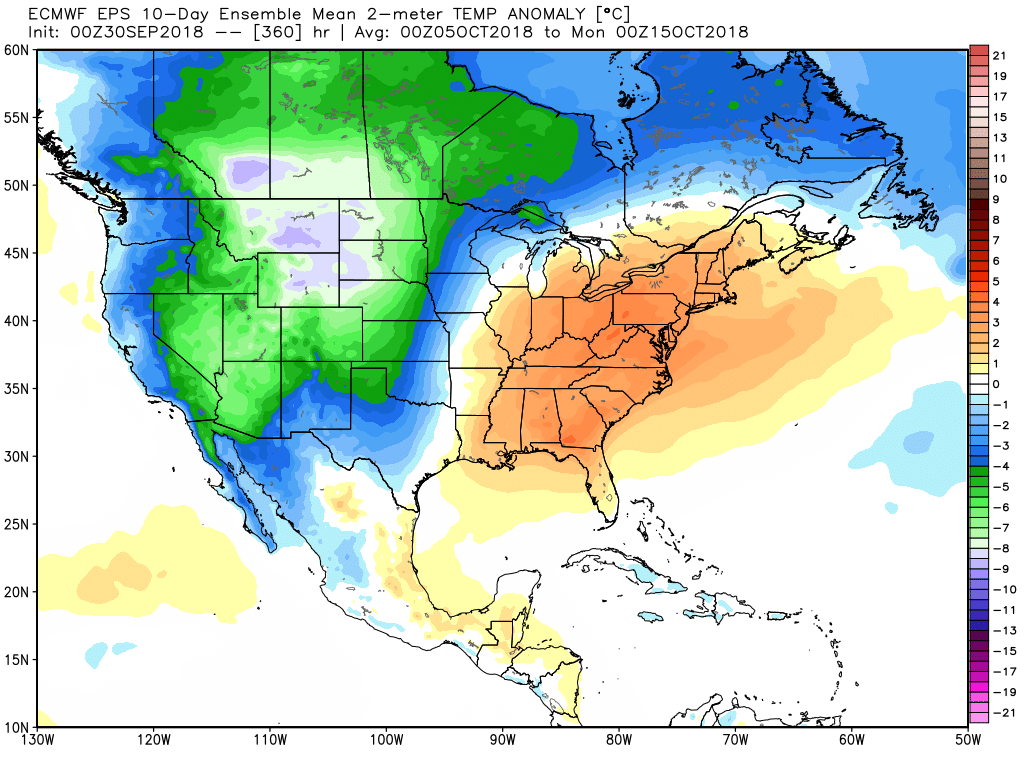 What's it all mean for Denver and eastern Colorado? Time will tell. For now the focus will be west and southwest of us, as the week ahead starts quiet and warm across northeast Colorado.

MOS guidance has highs near 80 in Denver over the next three days, with very little in the way of rain chances as well. By Wednesday we see the first of several fronts in the forecast slide through, which should drop highs into the 60s for Thursday, and perhaps bring some showers and storms to the area by Wednesday night as well.

If we look at the mean precipitation forecast for Colorado from the EURO through Friday morning, we see the heaviest precipitation over western Colorado, but those rain chances for your Wednesday and Thursday delivering some moisture to northeast Colorado as well. 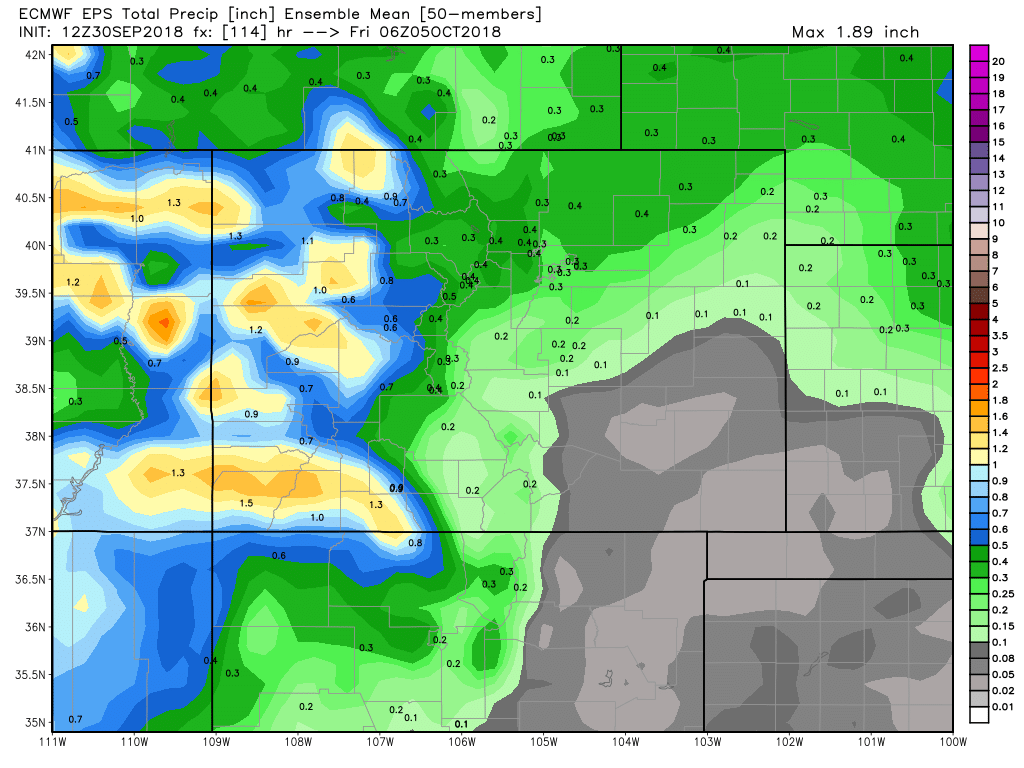 If we take it through the weekend, we see those totals increase across the board. This is indicative of a possible chilly and damp next weekend, as several short waves continue to dig into the west. The details around next weekend will need to be addressed as the week progresses. 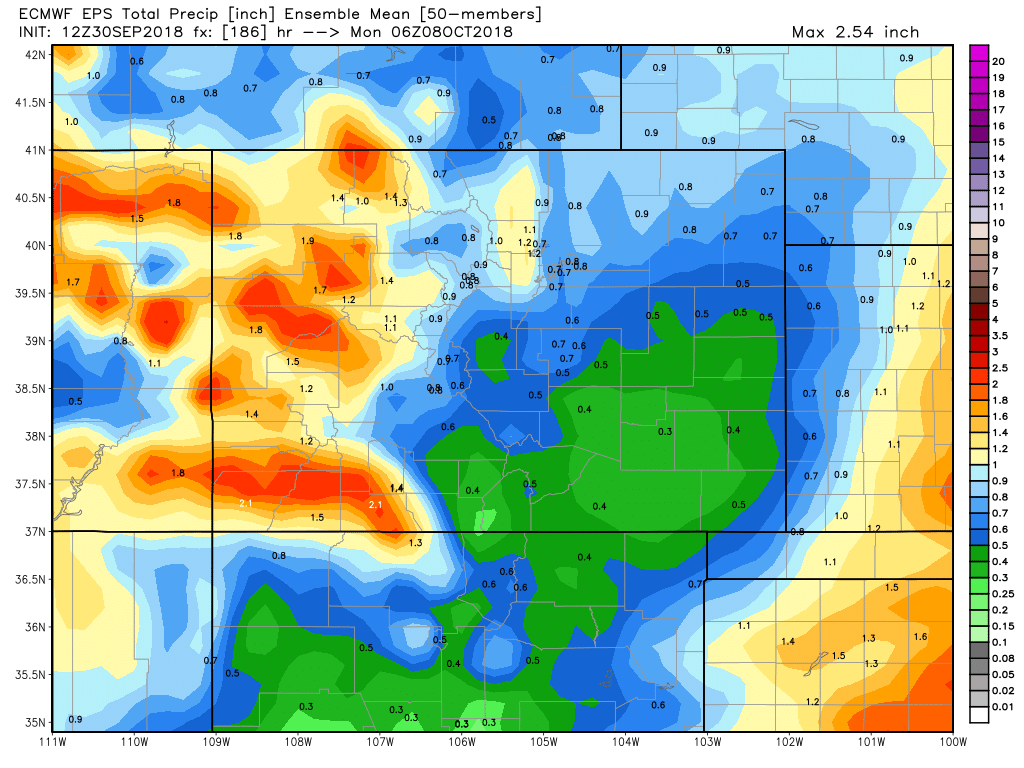 A look at the GEFS shows this nicely as well. Warm and pretty dry to start the week... but a general shift to a chillier and wetter pattern by the end of the week looks more and more likely: 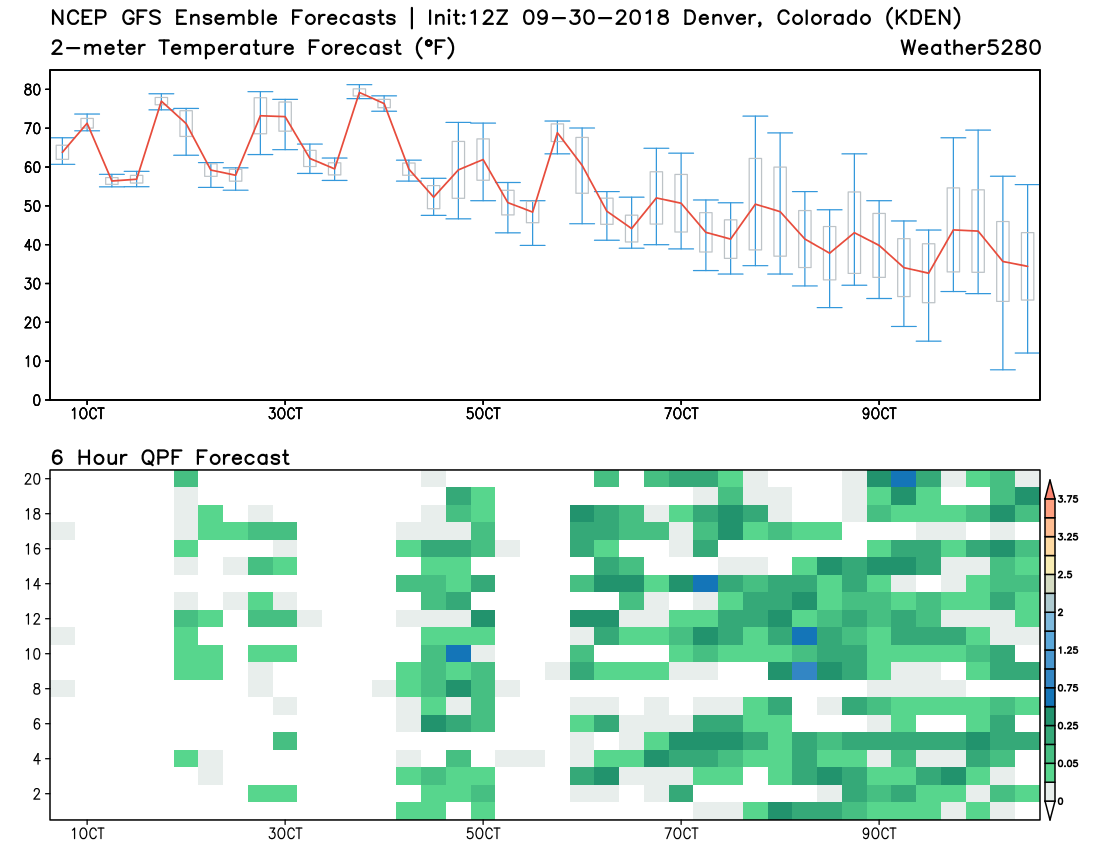 We'll hold on the details for now. Could we be talking snow before long? Perhaps. Several models suggest a column cold enough for flakes to fly by next weekend along the urban corridor. That said... while there's reasonable confidence in the large scale pattern that is evolving to start October, the details are a bit vague, especially on the leeward side of the Rockies. Patterns with big troughs parked across the intermountain west can deliver some early season snows to the Front Range range... but they can also act to dry slot those of us east of the mountains, with the active weather stuck west, then again east of our area. We shall see.