Chilly, Unsettled, a Chance of Rain ... and Snow?

The next week or so looks quite a bit chillier and unsettled than we have seen in some time. Starting with a decent chance of rain later this evening across northeast Colorado, and continuing off and on over the next week or so.

Today's wave will bring some snow to the higher mountain passes, at at least some rain to northeast Colorado. As you can see in the animation below, best chances will likely be from about Denver north, with little in the way of moisture south of the Palmer. For Denver we will go with a 40% chance of rain showers this evening and overnight, and watch as temperatures tumble into the 30s(!!) for overnight lows.

Most areas precipitation totals will be very light over the next 24 hours. The GFS and EURO agree there will be a band of heavier rain extending roughly from Denver northeast. The GFS has that band focused a little north of town, while the EURO has it focused a little south:

The HRRR shows the cold front moving into northern Colorado this afternoon, then through the Denver area by this evening. Pretty easy to spot the front sliding south across eastern Colorado after highs in the 60s and 70s in the latest 2m temp forecast from the model:

MOS guidance has lows tonight in the low to mid 30s for Denver tonight. The NAM is coming in at 31°F while the GFS is at 37° –– which seems more reasonable.

If we look at the GEFS for the next 10 days, we see the cooler pattern on the way. Note the red line in the top graph, it shows the mean temperature forecast at every 6 hours. Today highs perhaps climbing into the 70s once more... but that should be the last time for awhile: 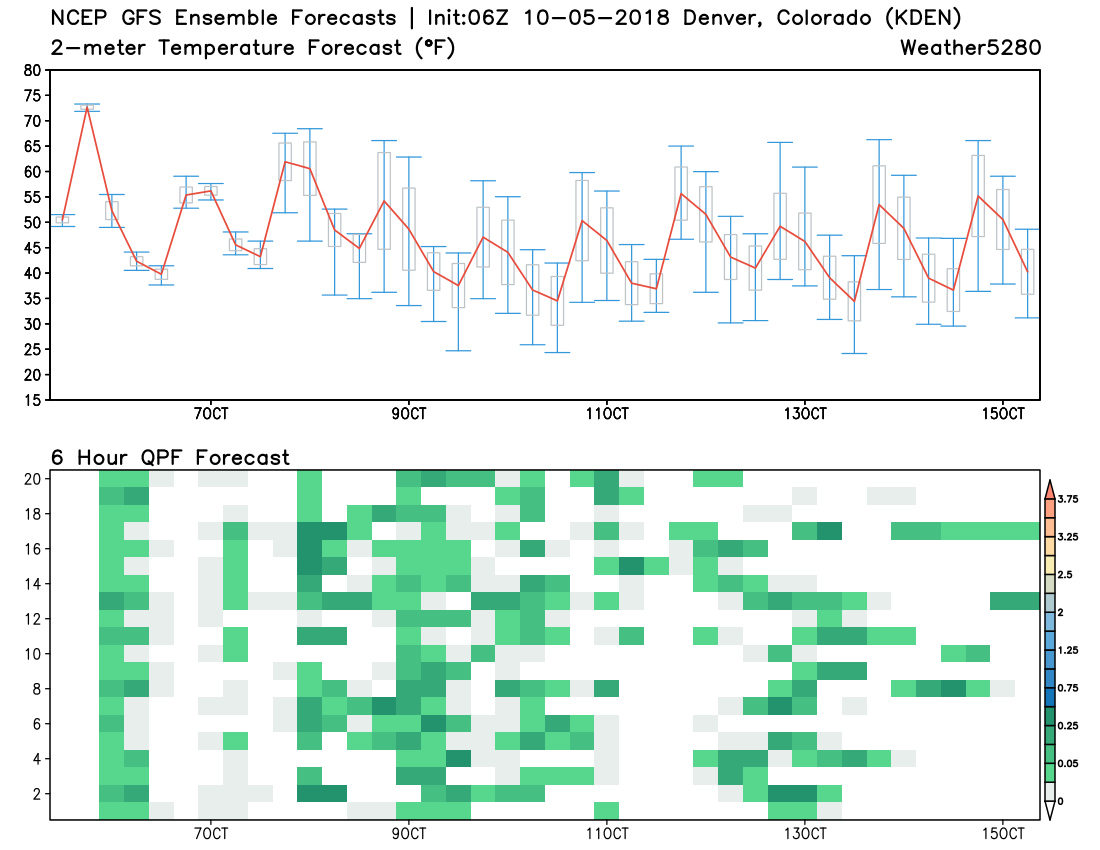 In the bottom graph we see lots of green scattered around. No real clusters (good agreement) but a couple of notable areas starting with tonight, early next week, then perhaps next weekend, as more tropical moisture becomes entrained in the flow. This is to say that models are still struggling with the details around the upcoming pattern, and, that much of our rain (and snow) chances will come in bursts, and not as a cleanly organized system.

Looking ahead
Once we get through today's cold front and subsequent rain chance, our focus will be on late weekend and early next week.

Highs both Saturday and Sunday should be in the 50s for Denver, with rain chances diminishing early Saturday, then on the increase later in the day Sunday.

Monday highs will only be in the 40s for Denver, with the chance of rain/rain showers continuing.

At the moment it looks like the best chance for some snow flakes at lower elevations will come Monday morning, then again Monday night into Tuesday. While models are generally running warmer for this time period than they were a few days ago... quite a bit of cold air "nearby" that could be tapped.

At the moment it doesn't look quite cold enough to be hugely impactful below about 5,500 feet. The EURO has trended wetter once more Sunday PM through Tuesday along the urban corridor and eastern Plains, but keeps most of the accumulating snowfall confined to the foothills and western Palmer divide where elevations are higher. At the moment we see little reason to argue with this... but we'll certainly need to watch how things progress this weekend. Should any of these waves set to move through tap just a bit more energy and cold air... we could be talking Denver's first snowfall of the season early next week.

Looking a little further down the road to late next week or next weekend... Models continue to show hurricane Sergio moving northeast and on into the southwest early next week, with remnants eventually tracking up across our region, much like Rosa did. For the moment models have it taking a more southerly route which makes sense given the placement of the mean trough across the north and all the cold air in place. This potentially would give those of us east of the mountains a bit better shot at some moisture as compared to Rosa. A LOT of time between now and then, but something to watch. FWIW, here's the latest GFS 500mb forecast for late next week:

And the latest EURO ensemble spread: 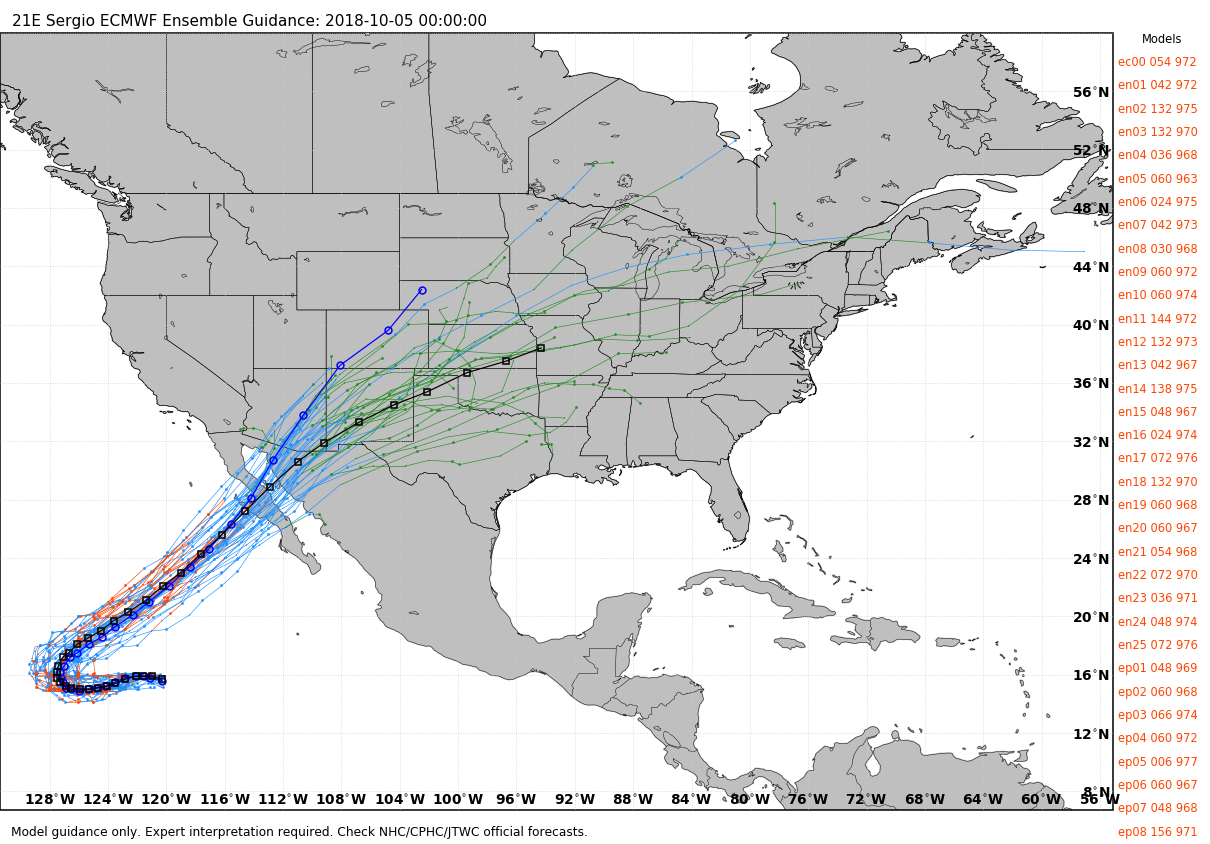 Even if we miss on Sergio, likely another round of very wet weather for Arizona next week, as well as portions of Utah, New Mexico and Colorado.

Bottom line
A lot to watch over the next week.

Then the rain and perhaps some snow on the way for your Sunday - Tuesday time period. Here the confidence in the forecast is VERY low at this time. Where the heaviest rain ends up, and where that rain/snow line ends up being is still very much in question, with little agreement/confidence in any of the data right now.

And finally, a cooler week overall next week... with perhaps some tropical moisture to watch late in the period from Sergio.

In a word, unsettled.