Well, as we opined on Friday, yesterday's event wasn't all that much of a snow maker in the end. A few locations saw an inch or two north of Denver, but for the most part, out outside of the Front Range foothills and mountains, we saw more freezing drizzle and mixed precipitation than anything else.

A look at observed totals over the last 48 hours lines up pretty well with our low-end forecast. Generally just a trace of snow across the Denver area, with 0.5" to 1" for northern Front Range communities. A few mountain communities north of Estes Park and west of Fort Collins saw those totals climb above 6" or so, but not widespread for the most part: 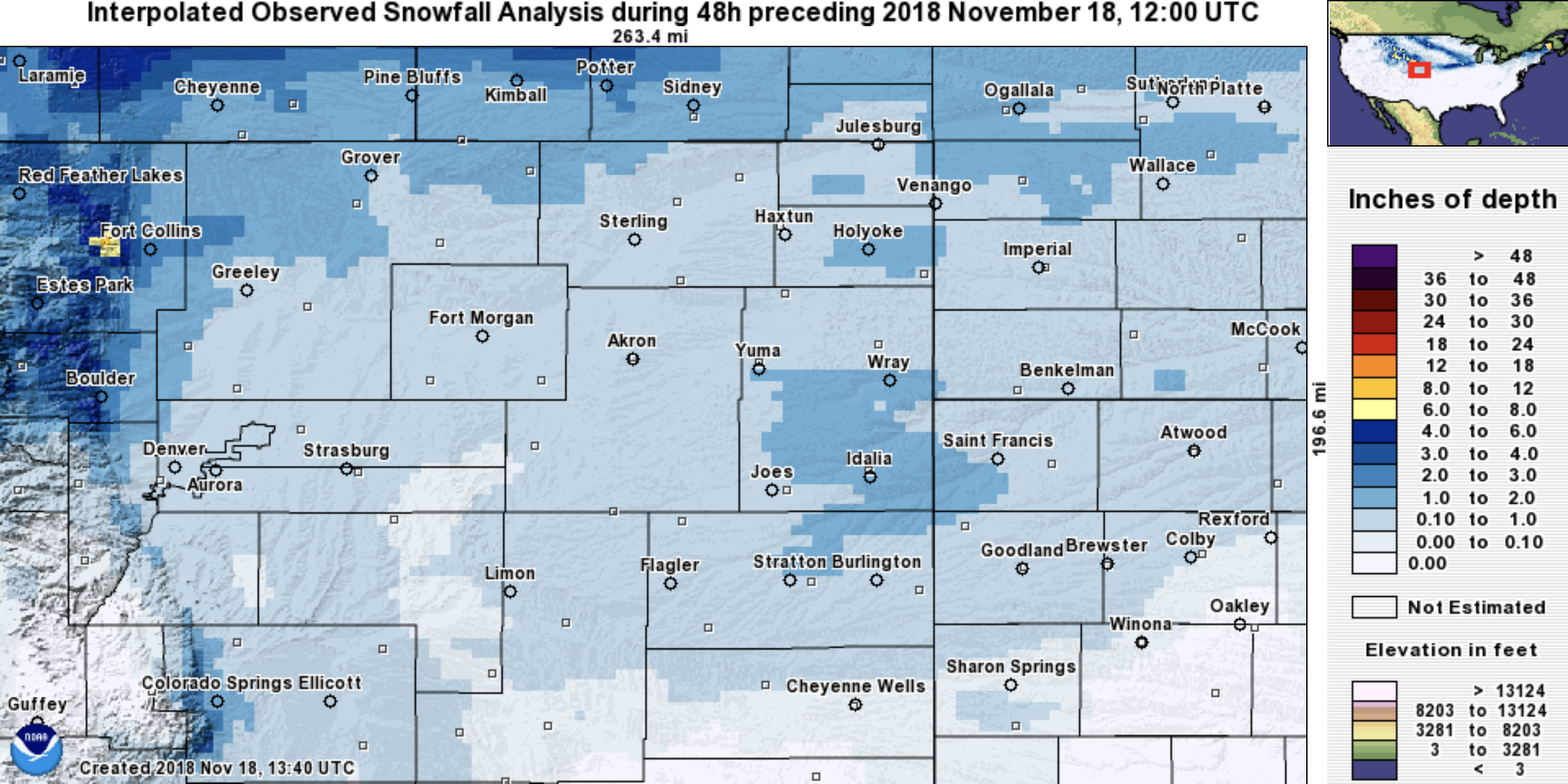 The big issue yesterday and last night instead was the ice. Roads stayed okay for the most part in Denver, but a good coating of ice was found on vehicles and other raised surfaces. Areas to the south saw some nasty icing as well, with Colorado Springs dealing with icy roads Saturday night.

Today the sunshine returned. Temperatures in Denver Sunday afternoon climbed into the low 50s, right about where we'll be for your Monday as well.

The week ahead
Ridging will be the word for most of the week, with mild temperatures expected across eastern Colorado through at least Thursday. MOS guidance shows highs in the 50s to low 60s through Thursday, including a 62°F from the GFS right now for Thanksgiving. We all know the GFS can be a turkey sometimes, but a good number to aim for nonetheless. 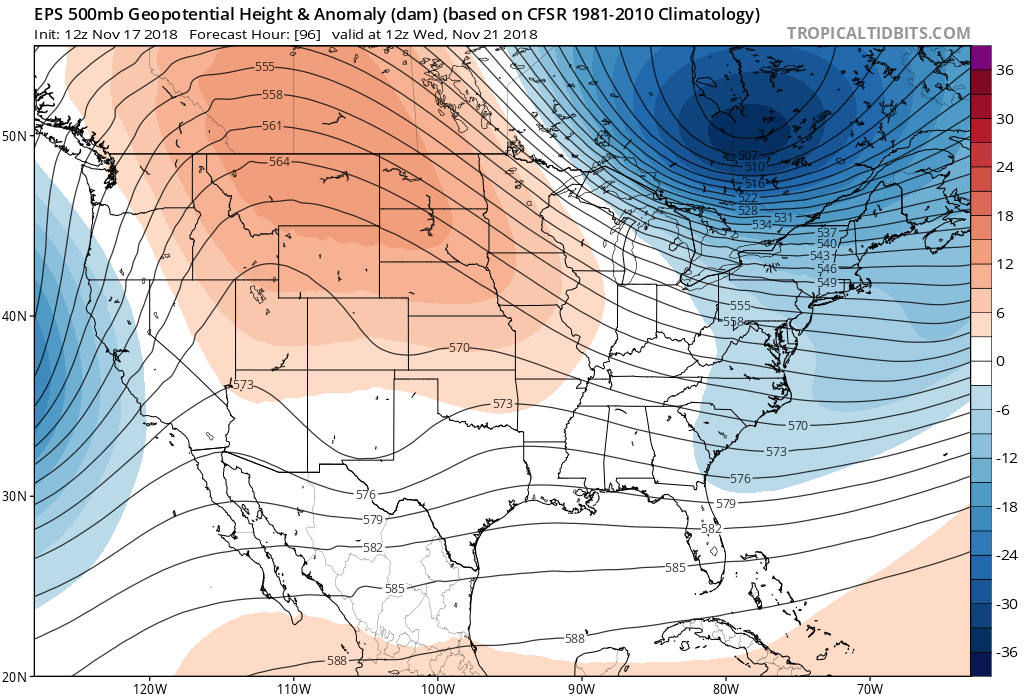 By late in the day Thursday our next system approaches, and with it a chance of snowfall for the high country. At the moment this doesn't look to have too much of an impact east of the mountains, with the exception of perhaps a strong downsloping wind event along the foothills. For the northern and central mountains, perhaps some good snow to round out the week.

It's next weekend that we need to watch more closely. Models are trying to move a stronger system across the state Saturday into Sunday –– though I'll caution that ensemble support at the moment is not all that great. The tendency from the GFS and GEM models is to keep the wave rather open as it moves through, not really strengthening it until it moves east of Colorado. The EURO ensemble mean has trended that way a bit too.

Still, from time to time we do see some more interesting runs. Namely, at the moment anyway, from the EURO operational model which is deeper and even closes off the low over southwest Colorado Saturday evening tracking it into the Oklahoma/Texas panhandles Saturday night. This solution would provide a colder and snowier setup for northeast Colorado next weekend.

The meteograms from each model capture the differences well. The GFS (top) shows a nice cold front for next Saturday (though not all that impressive) and 0.2" of liquid at DIA, with highs rebounding into the 40s by Sunday. Meanwhile, the deeper/slower solution from the EURO (bottom) shows highs dropping into the 20s by next Sunday in Denver, and nearly an inch of liquid for the city. The 12z GFS has a stronger something instead moving through next week(?)... but we'll ignore that for now, and focus on the weekend. 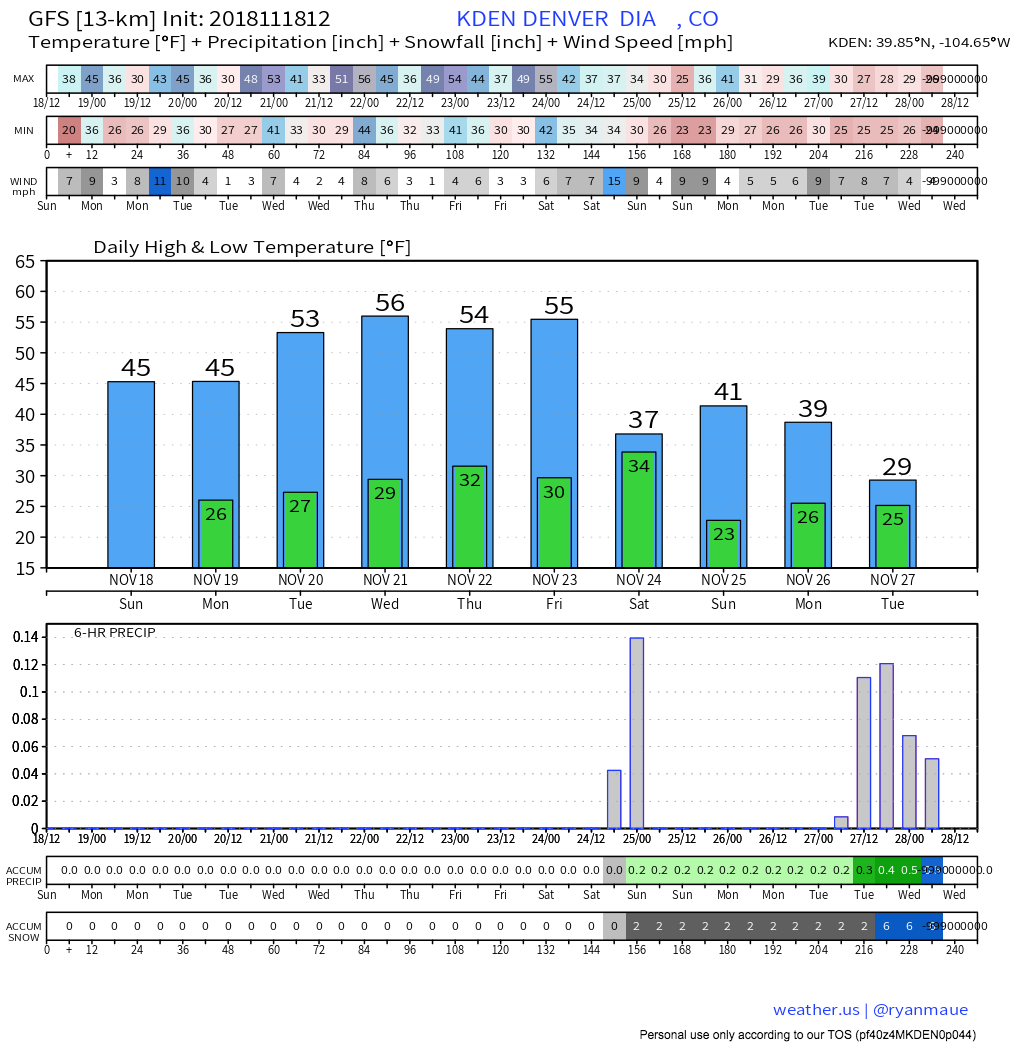 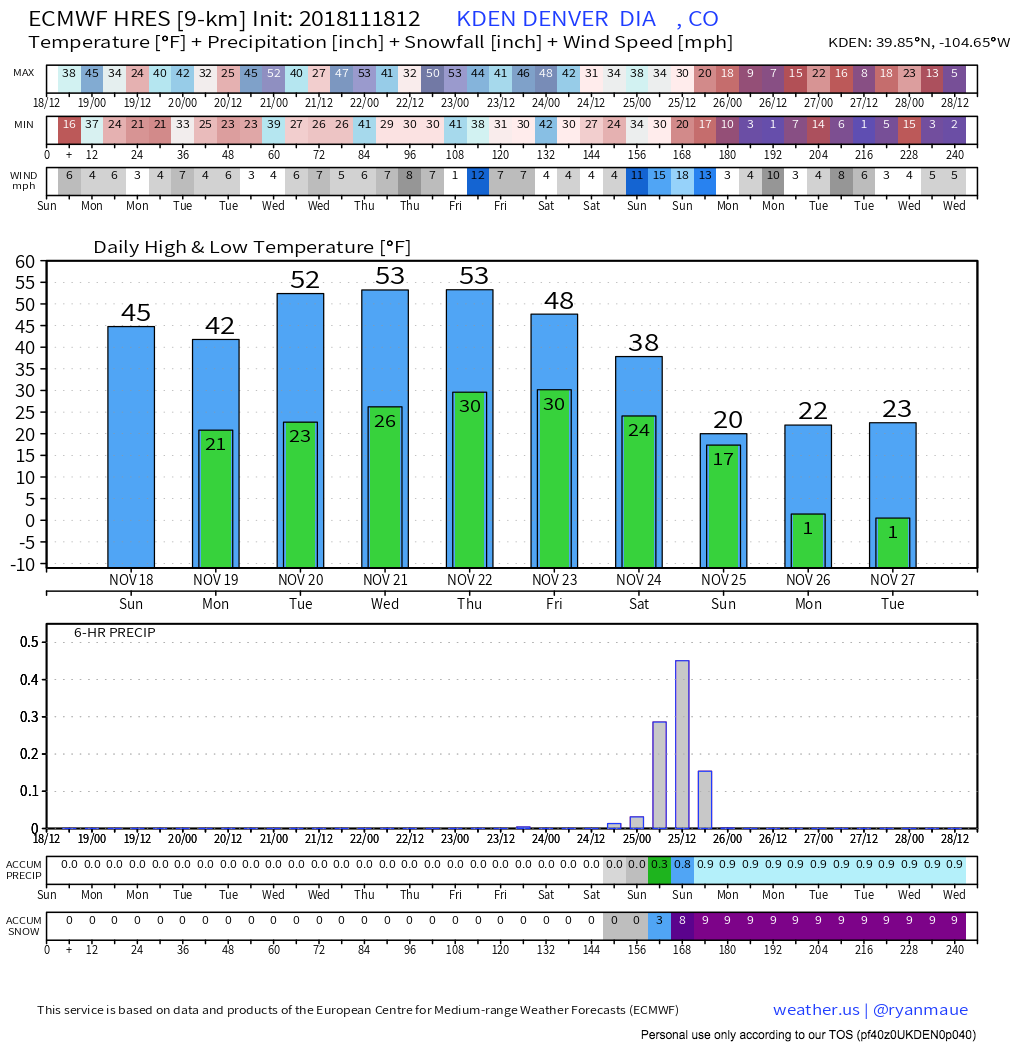 Again, we'll see. It's a long way out, and frankly, not a ton of support for what the EURO is trying to do. Not from its own ensembles, or from its teleconnection package either. I suspect we'd want to see the PNA dipping negative instead of hovering near neutral or even going positive? 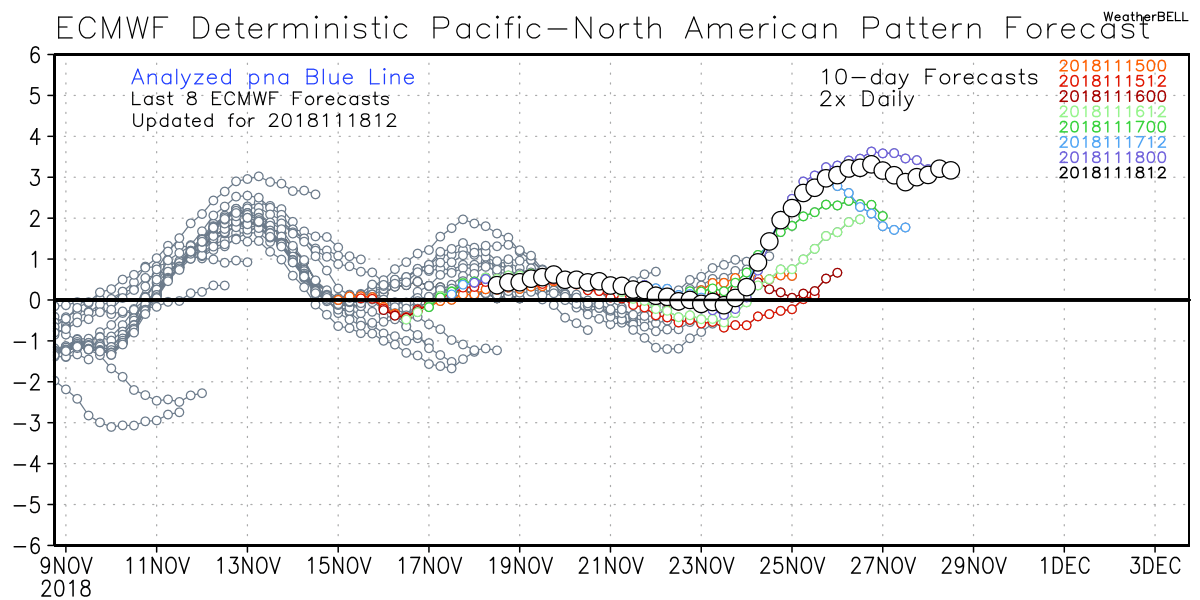 But perhaps we can take advantage of an early negative NAO: 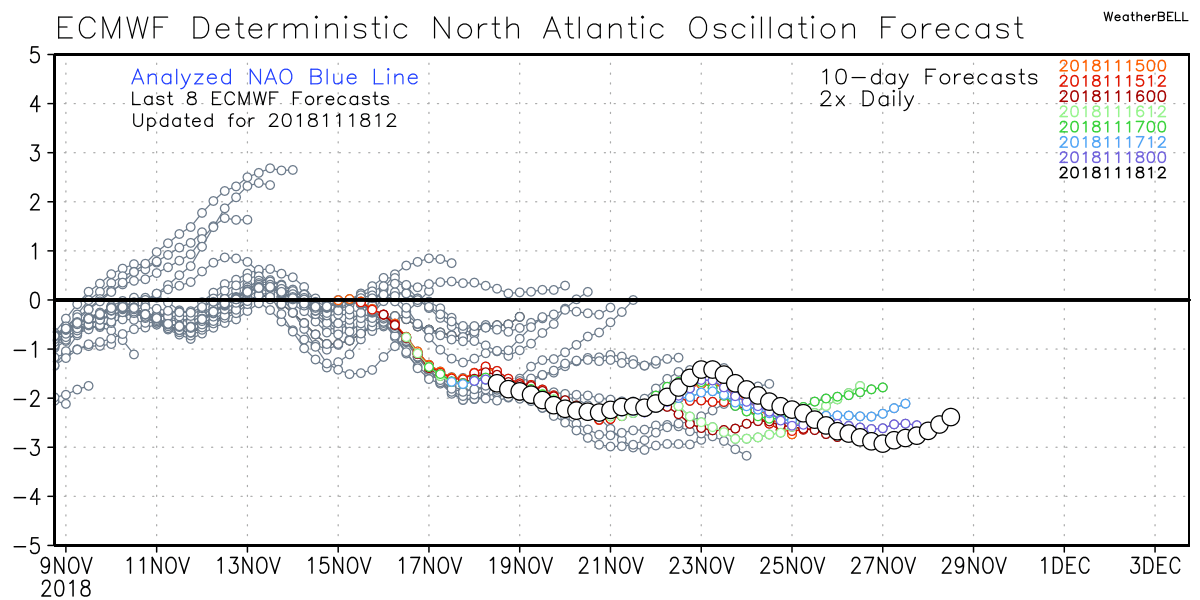 Which in November supports a cold pattern across the high plains: 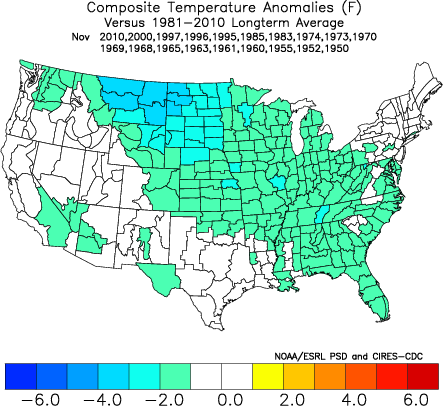 In short, a nice week ahead and a tough pattern to follow. Enjoy a mild Thanksgiving, look for snow to return to the high country later this week, and keep an eye on the forecast for the plains for next weekend!